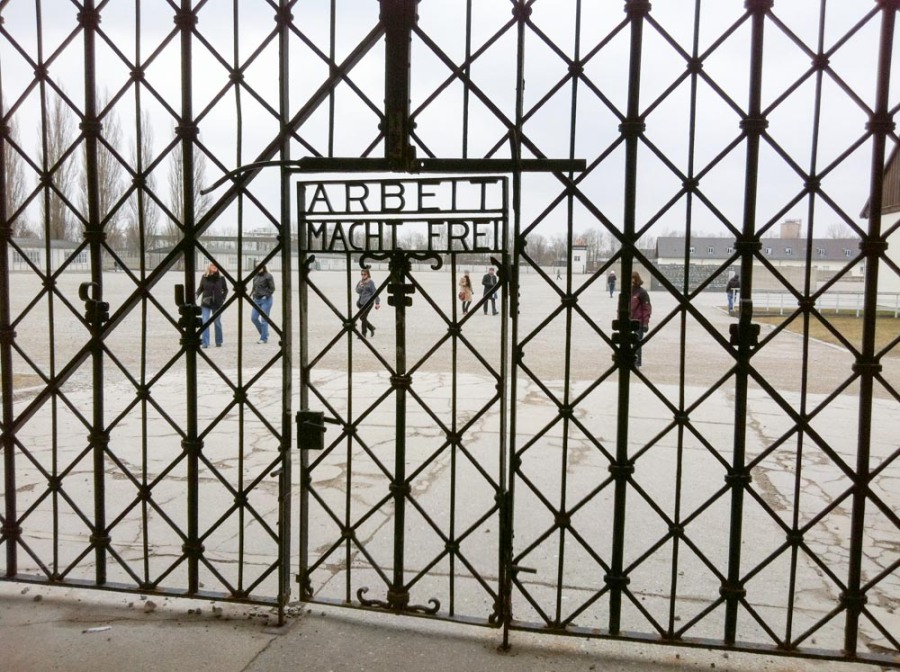 Dachau was the first of the Nazi concentration camps.  It was opened in March of 1933 and it was used as a model for the other camps to follow.  The camp served as a training center for SS guards, as well as a forced-labor camp for what Heinrich Himmler called “political prisoners.”   Dachau was built to hold about 5,000 prisoners, but by the time the camp was liberated by American soldiers in 1945, the number of prisoners held there was more than double that number.  In its twelve years as a concentration camp, over 200,000 prisoners were taken to Dachau, and nearly 32,000 deaths were recorded there.  When US troops liberated the camp in 1945, soldiers reported seeing a row of cement structures that contained rooms full of hundreds of dead bodies piled floor to ceiling.

oday, the camp is a memorial site.  Most of the barracks have been razed to the ground, but two of them have been maintained so that visitors can see the living conditions of the prisoners.   I visited the camp last Sunday, and the weather was suitably bleak and oppressive for the visit.  I think I would have felt a little strange if it had been a sunny, warm, cheerful day.

To visit the Dachau Concentration Camp Memorial site from Munich, you must take the S2 line of the S-Bahn to the Dachau Bahnhof.  From there, a regular bus runs directly to and from the “KZ-Gedenkstätte” stop.   KZ is short for Konzentrationslager (concentration camp) and Gedenkstätte means ‘memorial.’  From the Munich main train station, the entire travel to the memorial site took us about 45 minutes.

At the memorial site, admission to the memorial is free, but there is a visitor’s center where you can pay a small fee for an audio tour guide.  You also get a map of the site which guides you through the path an incoming prisoner would have taken.  It starts with the main gate, pictured at right.   The German phrase written in the metalwork of the gate, Arbeit Macht Frei, means “Work makes you free.”  This phrase was used at the gates to many of the concentration camps, famously including Auschwitz.

After you pass through the main gate, you find yourself in an enormous open area, with one set of buildings to the right (currently a museum) and baracks off to the  left.  The giant field is the roll-call square.  Prisoners would stand here for roll call each morning, sometimes standing in place for up to an hour.  The dead would often be dragged into the roll call square to be counted as well.  This picture is looking across the roll call square towards the still standing barracks. 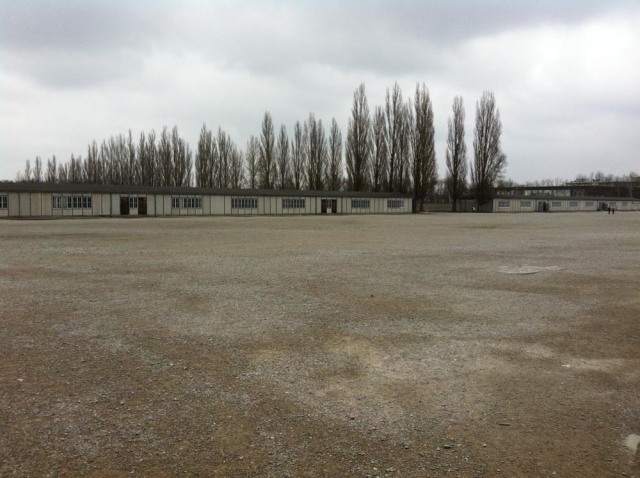 Inside the barracks, you can see what the living conditions were like for the prisoners.  Privacy was nonexistent.

These sleeping racks were overfull by the time of the camp’s liberation in 1945.   The single structure below contains sleeping space for 54 prisoners.  This is one structure at the end of one portion of one of the 32 separate barracks buildings.  In 1945, the camp was up to more than 12,000 prisoners.

Today, most of the barracks are gone, but there are gravel outlines where they stood: 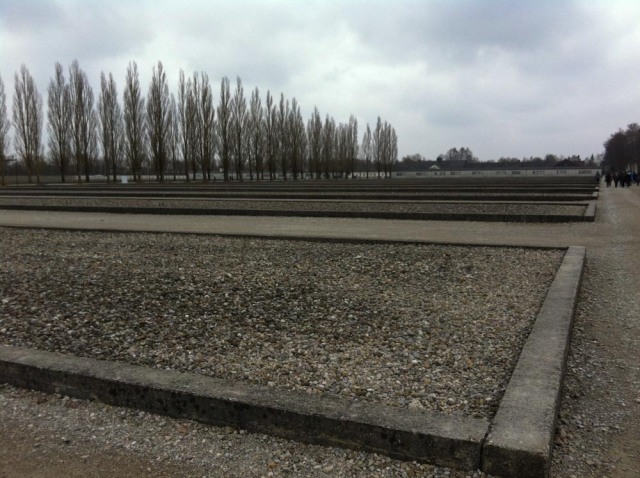 Walking up the road alongside the barracks, you can see one of the remaining guard towers.   Prisoners who ventured too close to the fence were shot on sight, and it is said that some prisoners ran to the fence as a means of committing suicide. 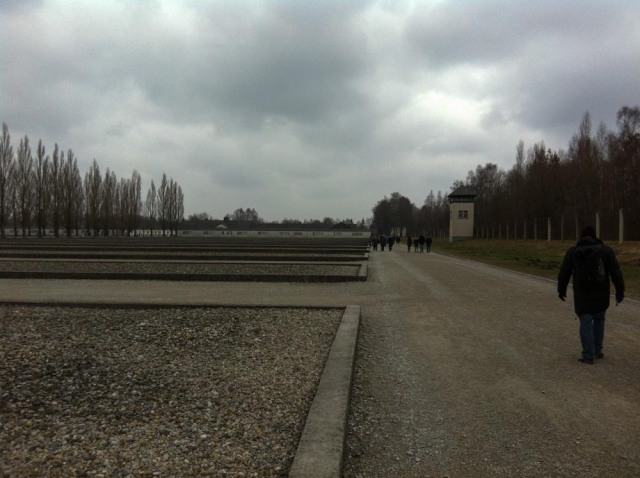 At the end of the walkway, there is a small gate leading to the old and new crematoriums. From the outside, it looks fairly inoffensive. 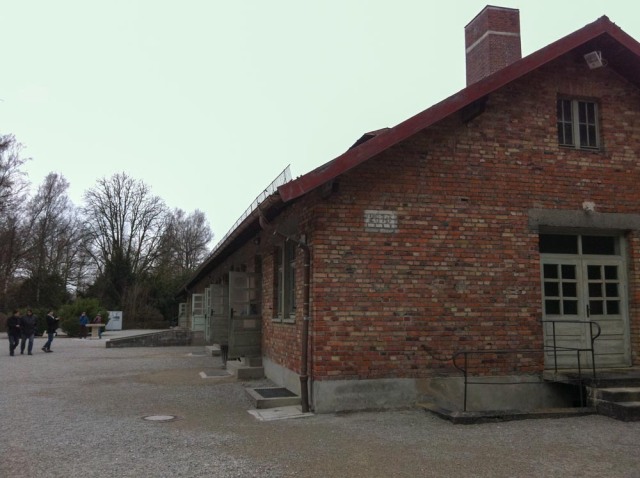 When you walk inside, though, it’s a very sobering reminder of the atrocities of the Holocaust.  The room below is a gas chamber.  Up to 150 prisoners at a time could be forced to disrobe in the room next to this. False shower heads were installed into the ceiling so that the prisoners would believe that it was merely a large group shower room.  Once they were sealed inside, Zyklon B (prussic acid poison gas) would be used to suffocate the prisoners to death in fifteen to twenty minutes.

I was not surprised to note that nobody lingered in this room at the memorial.

Despite the presence of a gas chamber in Dachau, there is no evidence to support the idea that the gas chamber was used for mass murder there – most of the known deaths in Dachau were by gunshot or by hanging.  This model of gas chamber was used heavily in many extermination camps, however-   Auschwitz, Belzec, Chełmno, Jasenovac, Majdanek, Maly Trostenets, Sobibor, and Treblinka. 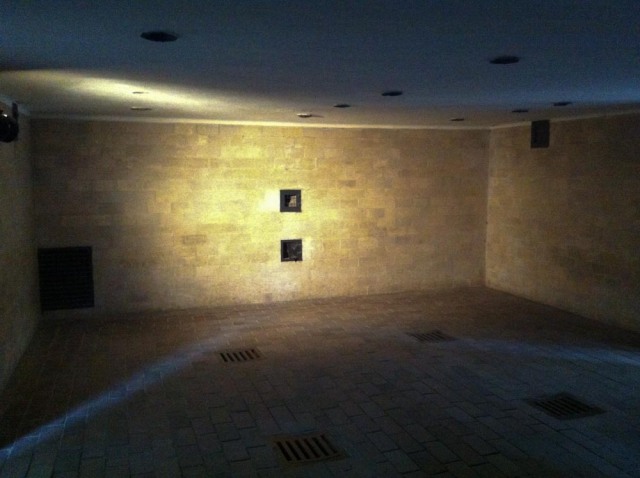 The room adjacent to the gas chamber is a crematorium.  Each of these furnaces was capable of incinerating two or three corpses at a time. 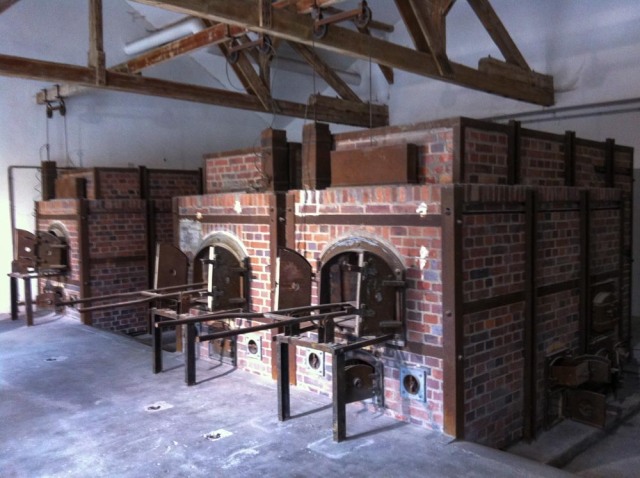 I usually try to end my posts with a question to spark discussion, but I honestly don’t know what to say on this one.  The entire experience of visiting Dachau is horrifying.  It’s important to be aware of the Holocaust and to know what happened in Nazi concentration camps, but I don’t think I really want to talk about it any more.