In Neupfarrplatz, one of the largest main squares of Regensburg, there is a big church called the Neupfarrkirche.   Tucked behind that church is a triangular metal structure containing a door.  The door contains a stairwell that goes down into Document Neupfarrplatz, an exhibit made of an archaeological excavation beneath the square which occurred between 1995 and 1997 .  The exhibit isn’t open all the time.  There are tours at set times, and you have to go to the Tabak shop across the way to buy your tickets before the tour.  It’s only €5, for a one hour tour in German. 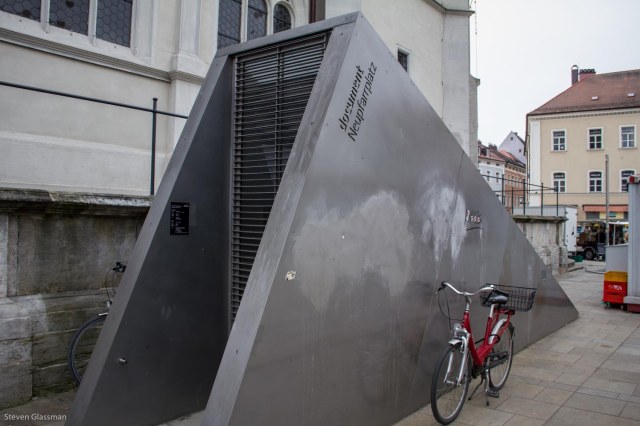 Once you get to the bottom of the stairs, you’re in a large chamber with pathways leading off in other directions.  There is a set of tunnels which comprise part of a ring shaped underground air-raid shelter built around 1940.  These first two pictures show part of that structure. 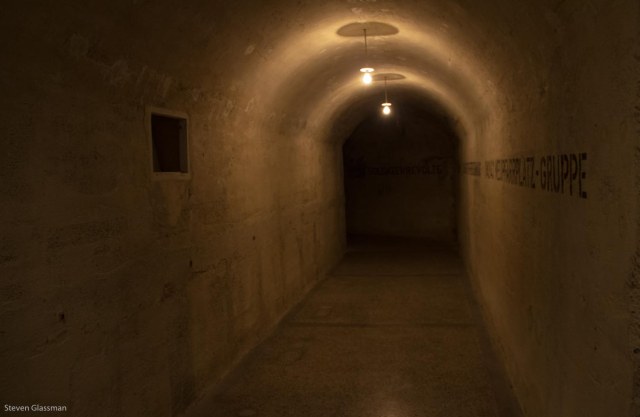 Looking down the hall from the air raid shelter hallway, you can see part of the main chamber at the foot of the stairs. 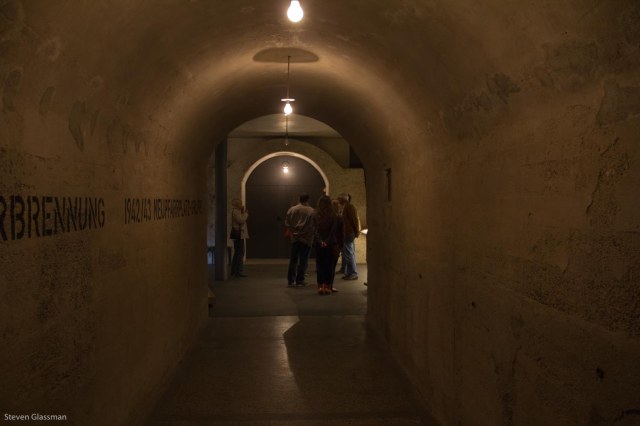 Inside that first chamber are three glass cases containing small items from three different time periods of the excavation.    The first is a bronze figurine of the Roman god Mercury, from the second or third century A.D.

This statue is believed to have stood on the house altar of a high ranking Roman official.  This location was the Roman camp Castra Regina around 179 A.D.  Castra Regina was a fortified military base, and I’ve posted photos of the old fortress walls before.  The remains of Castra Regina lie here, six meters below Neupfarrplatz.

This pointy fellow is a bronze figurine of the high priest Aharon from the 15th century A.D.  This is from the medieval Jewish quarter, which also stood in Neupfarrplatz after the Roman Empire.  Southern Germany’s biggest Jewish community prospered here from the 8th century until February 21st, 1519, when the Jews were driven out of the city.    At the time of the expulsion, around 80 Talmudic scholars lived here. 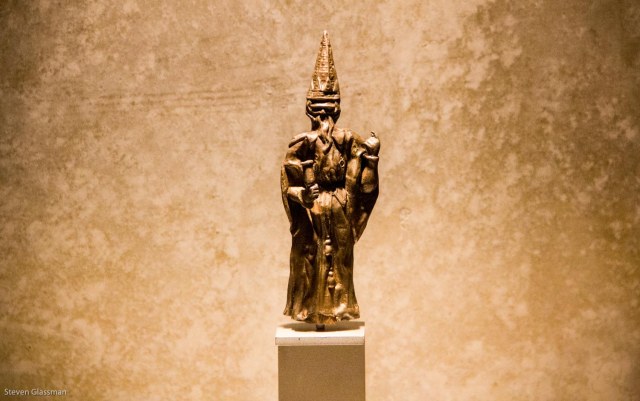 After the explulsion of the Jews in 1519, the synagogue was demolished.  A wooden chapel was dedicated to the Virgin Mary (Zur Schönen Maria) at this location soon after.   The chapel became a center for mass pilgrimages.  The next  item pictured is a silver sign of pilgrimage from around 1520.

So much money was generated by the pilgrims that the foundations of a new larger Neupfarrkirche were set in 1540.  This is where the names Neupfarrplatz and Neupfarrkirche come from-  Regensburg became Protestant in 1542 and the pilgrimage church was reconsecrated as “Neue Pfarre,” the new parish church.

Opposite the bronze and silver items encased in glass is a walkway supported over part of the excavated structure.  These were cellar rooms – the archway goes to another room which had been converted several times.

One of the more spectacular things found during the excavations were these 624 gold coins, buried around 1388.

Next to the gold coins is a golden ring with the star-and-moon seal of the medieval Jewish community of Regensburg.

This archway contains stairs which used to lead to the surface.

Above the stairs is a “window” embedded in the surface of Neupfarrplatz.  The window cost around €25,000 to install. 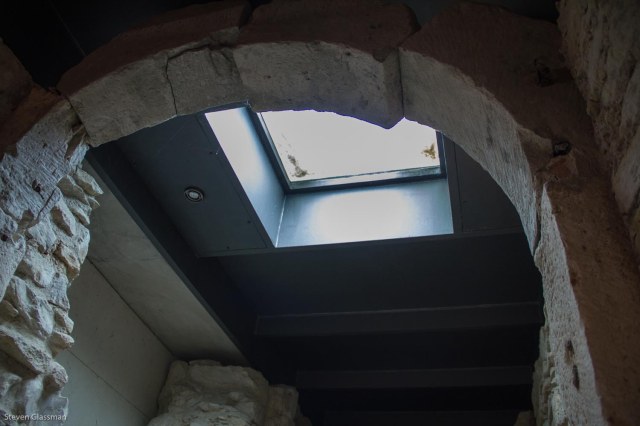 Here’s the window from above ground-  the people at this cafe probably don’t realize they’re sitting almost directly above hundreds of years of history. 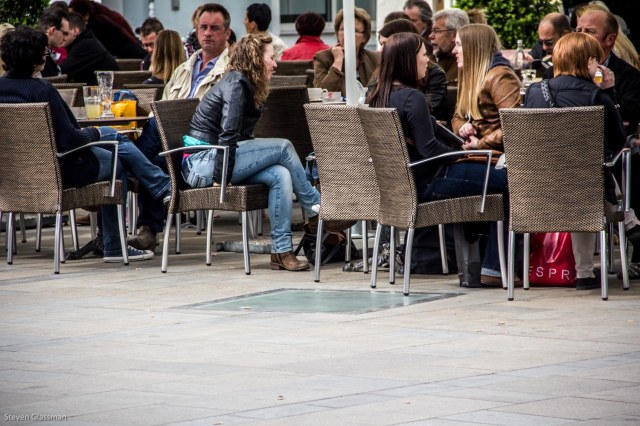 Opposite the Neupfarrkirche is a white marble structure which shows the layout and position of the original medieval Jewish synagogue prior to it being destroyed in 1519.    This artistic representation of the old synagogue was created in 2005 by the Israeli sculptor Dani Karavan.  It was designed to be a “Place of Encounter, ” a symbol of Christians and Jews living together.  Hebrew lettering engraved in the space where the Torah was kept spell out the word “Misrach” to point to the east, toward Jerusalem.

The white marble is directly in front of an ice cream cafe, so it’s a popular place for people to sit and snack with friends on a sunny day.

So a Roman, a Rabbi, and a Protestant walk into a bar…   I’m just kidding.

Have you ever been to an archaeological excavation?

9 thoughts on “Document Neupfarrplatz in Regensburg”