(This little post was written months ago, but I never got around to using it.  I’ve been hip-deep in getting moved over to Florida, so it seemed like now would be a good time to post it.  -Steven, 5 October)

One of my favorite things about visiting Eastern Germany is seeing the Ampelmännchen, or “Little traffic light men.”  This happy little fellow is left over from the former German Democratic Republic, so any city that was part of East Germany before German reunification in 1990 is likely to have these little guys on their walk signals.

The Ampelmännchen were designed by a German traffic psychologist named Karl Peglau in 1961.   Peglau wanted to create a traffic light that would be both cute and appealing to children, yet easily accessible and understandable for elderly Germans.  Also, I didn’t know before writing this post that “traffic psychologist” was a career option.

The Ampelmann is so popular that some cities in Western Germany have adopted the symbols, and an entire souvenir industry has sprung up around them.   There’s even a store in Berlin where you can buy all manner of Ampelmann swag- t-shirts, hats, buttons, keychains, deck chairs, earrings, and more.

These particular Ampelmännchen were spotted while I was in Dresden. 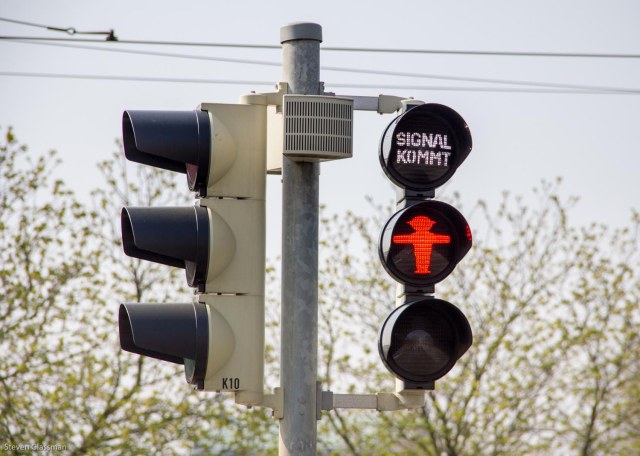 Do you own any Ampelmann swag?  What do you suppose the green Ampelmann is carrying in front of him, a baguette?