The Boston Molasses Flood of 1919 is one of the most fascinating disasters I’ve ever heard of.   Here’s how it went down:

The Purity Distilling Company had a large storage tank, 50 feed high and 90 feet in diameter, sitting at 529 Commercial Street in Boston.  It had been filled a few days before, and contained more than two million gallons of molasses. 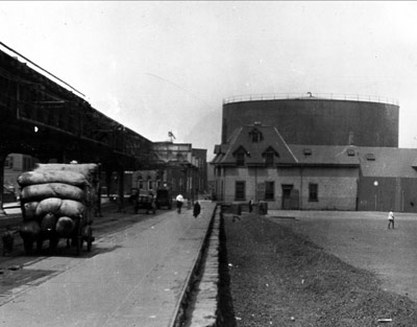 On January 15, 1919, around lunch time, the structural integrity of the tank failed.   More recent research has shown that the tank was not as thick as it should have been for its size, and the steel used was more brittle than it should have been.  Additionally,  the tank was not tested properly for leaks, and was already leaking molasses so badly that the company painted it brown to hide the leaks.  The weather on January 15th had warmed up rapidly, and researchers believe that this contributed to fermentation which would have increased the internal pressure of the tank.

When the storage tank burst at around 12:30, a fifteen foot high wall of molasses traveling at 35 miles per hour swept through the streets of Boston.  From Scientific American:

All that thick syrup ripped apart the cylindrical tank that once held it, throwing slivers of steel and large rivets in all directions. The deluge crushed freight cars, tore Engine 31 firehouse from its foundation and, when it reached an elevated railway on Atlantic Avenue, nearly lifted a train right off the tracks. A chest-deep river of molasses stretched from the base of the tank about 90 meters into the streets. From there, it thinned out into a coating one half to one meter deep. People, horses and dogs caught in the mess struggled to escape, only sinking further.

The wall of molasses completely demolished some buildings, knocked others off of their foundations.   Ultimately, the flood killed 21 people and horses, injured around 150 more people, and caused immense property damage.  Some of those killed were not found for several days, and were so glazed over by molasses that identifying their bodies was difficult.   Roughly half the victims were crushed by debris or drowned in molasses.  The rest died from injuries and infections in the days and weeks that followed.

It took weeks to clean up the molasses from the streets.   It was ultimately sprayed down with salt water from a ship in the harbor.   The water was brown from molasses until the following summer.  This is what this area of Boston looked like during cleanup from the flood: 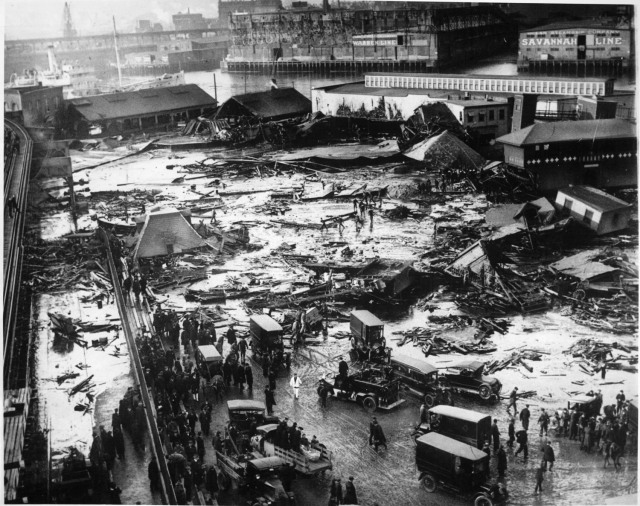 This is the track of the El train that was damaged by the flood:

And, lastly, the Boston Post from the following day.

Today, there’s a plaque at the entrance to Puopolo Park commemorating the disaster.

What’s the disaster that most fascinates you?