For my Thanksgiving post, I had the brilliant idea to share some of my favorite Thanksgiving joke images today. Then I checked and sure enough, I had the exact same idea during NanoPoblano 2016. Damn it, Past Steven, why don’t you ever leave some of the good ideas for Future Steven to execute?

Since my first idea for a Thanksgiving post has already been done, I’ll have to come up with something else. Perhaps a tale of the first Thanksgiving.

No, not that one. Not the one with the folks with the buckles on their hats dining with the locals in their new homeland. I also don’t mean my favorite Thanksgiving story, the one with the dog and bird making all the food.

As an aside, can we talk about this for a second? Who ever thought it would be a good idea to have a dog and a bird create a feast for the entire group? For that matter, who thought that buttered toast and popcorn was a proper feast? (Full disclosure: childhood me thought that buttered toast and popcorn looked absolutely delicious, and in my tiny brain this meal was the height of luxury for many years.)

No, I’m actually talking about my first Thanksgiving in Germany. A quick recap for those who haven’t read this blog from the beginning: I started the blog in late October of 2011, and moved to Germany on November 11th of that year. This meant that when Thanksgiving happened two weeks later, I was alone in a new country. I hadn’t really made friends yet, and I was only just getting to know my coworkers. I was even still living in the hotel, because I didn’t find an apartment there until the following week.

What I did have was an overabundance of preparation- I had Internet-stalked the local English speaker’s Stammtisch, and had pre-emptively become Internet-friends with a few local folks. (A Stammtisch is basically any group of people that meets regularly, often in a pub. The literal translation is “regular table.” The shared topic of a Stammtisch can be absolutely anything- a photography Stammtisch, a bridge-player’s Stammtisch, you name it. Think of it like meetup.com, but in Germany and without the clunky website.)

Because I had started the conversation with other people almost before I arrived in Germany, I managed to score an invitation to a Thanksgiving dinner being held at a local Irish pub called Murphy’s Law. (This Irish pub became one of my most frequent haunts for the three years I lived there, but that’s another story.)

The pub is all downstairs, and it feels like it’s carved out of a cave. It has a front area with a small amount of space ringing a U-shaped bar and a second much larger room which left empty unless they’re very busy. I was guided to this room on arrival, and I was seated with a bunch of people I didn’t know. I really only knew one person in the room at that point, and that one only just barely, so this was socializing-under-fire.

The dinner began, and it was a warm and friendly affair. I was the only American at my table, so I found myself acting as an impromptu American ambassador. I answered lots of curious questions from the others about traditional Thanksgiving customs back in the US. I wish I could remember some of the questions they asked, but this was nine years ago and I foolishly didn’t blog about it at the time.

Someone from the nearby US Army base in Hohenfels was at one of the other tables, and they had brought an American delicacy to be shared with the group: Twinkies.

I do love a traditional Thanksgiving Twinkie.

Speaking of Thanksgiving traditions, since I’m in my new apartment here in Arlington, I’ve managed to score a can of jellied cranberry. It just isn’t a proper Thanksgiving meal if I can’t see the ripples from the can on the side of my cranberry, you know? Now that I think about it, I’m pretty sure one of the questions I was asked at the German Thanksgiving dinner was about cranberry sauce. I have a vague recollection of someone being astonished that this was a food that Americans actively seek out and enjoy.

My family also has another tradition that is incredibly silly, now that I think about it. We would always have multiple pies after dinner, so you could choose which one you wanted to eat.

Does your family have any unusual Thanksgiving traditions?

In the weekend leading up to Rose Monday,  I went to Karlsruhe.  My reasons were selecting Karlsruhe were twofold:

First, Alex of ifs ands & butts and  Bev of Confuzzledom both live there, and they’ve been posting nifty things about the city for as long as I’ve known each of them, so meeting them and seeing their city was definitely something I wanted to do.

I did get to have dinner with Bev and her boyfriend Jan in the local Irish pub.  The food was delicious and the company was fabulous.  Alex was working, so she wasn’t able to hang out very much, but we did get to chat a little bit.  I very much enjoyed meeting Bev and Jan though; they’re both really neat.

All of the pictures I took in Karlsruhe were taken during my visit to the Badisches Landesmuseum, nestled in the Karlsruhe Palace.  The walk up to the palace is a big open space with some sculptures.  People were out enjoying the sunshine.  These gentlemen were playing a game in which they threw hand-sized metal balls at other metal balls, then picked them up with a magnet on a cord in order to throw them again.   I’m pretty sure it was Bocce, but I’m not certain since my only exposure to Bocce prior to this is that clip from Splash where the tour guide uses it as an exclamation.

There are also a great many sculptures surrounding the palace, like this statue which is supposed to represent Hercules slaying Cerberus, but it looks more like a dragon than a hellhound to me.

The Palace itself is beautiful, or at least it is in the photographs I’ve seen other people post.  For me, though, it was construction time.  Karlsruhe itself was under construction.  In fact, there’s a sandstone pyramid in the city that I was not able to find at all, even though I apparently walked within about ten meters of it:  Because of all the construction, it was completely wrapped and obscured.  (Google Maps claimed to know where the pyramid was, but following the map only led me to the Pyramide Shisha Bar.  In hind-sight, I should have taken a picture of their sign for posterity.)

The museum is currently holding an exhibit called “Imperium der Götter,” or “Empire of the Gods.”  There were some really neat sculptures inside.  This one is one of my favorites- there’s so much going on here!

The museum also holds lots of paintings of the royals from the region.  This is Princess Marie from Baden.

Who doesn’t love a little statue of Sleeping Eros?

Stained glass can be very pretty.  These panes were quite nice.

A very, very old bicycle.  Note the pedals attached to the front wheel, just like a penny farthing.  The earliest bike builders didn’t figure out right away that using a chain to drive the wheel is more efficient.

Here’s another statue I liked.  This one is tiny and bronze, no more than a foot tall.  I should have written down the name of it. 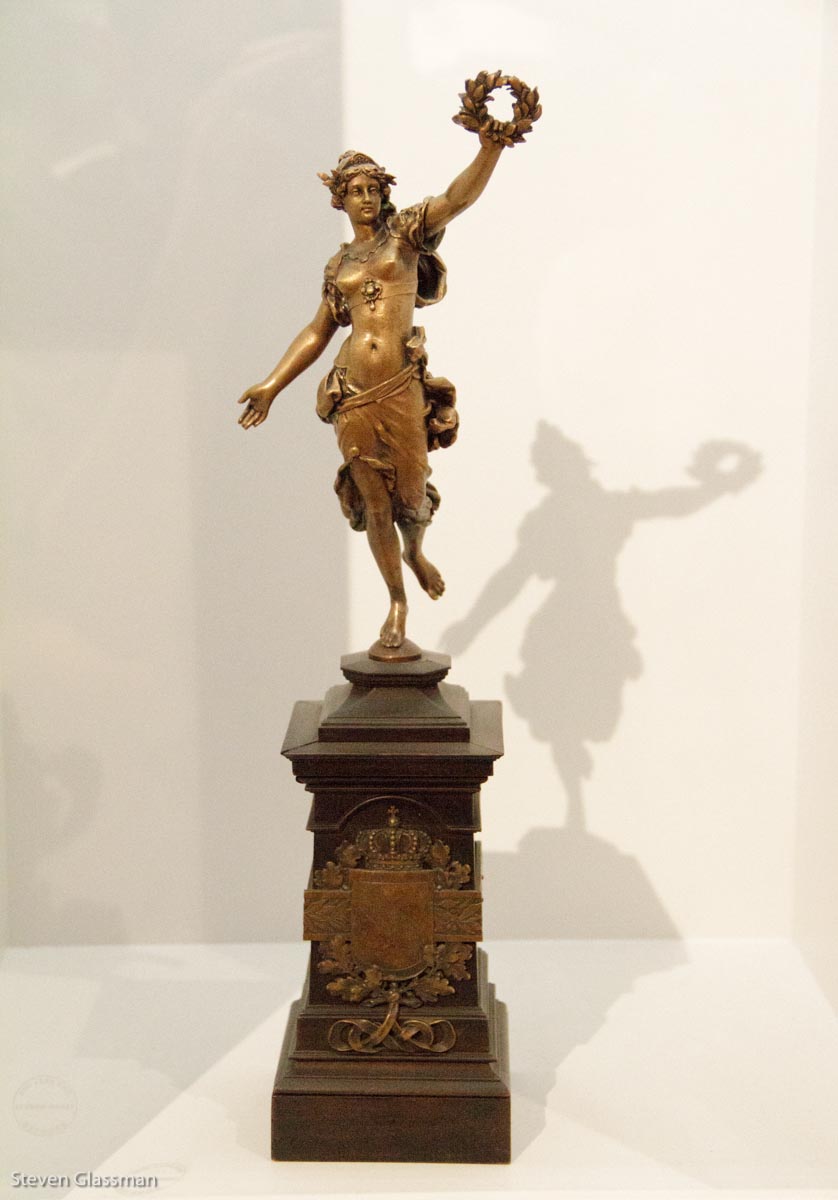 There was a section of the museum dedicated to the Holocaust.  They even had a set of the famous striped pajamas behind glass.

In their “1980s” section of the museum, they had a Commodore 64 with the original monitor and an old 1541 floppy disk drive.  Considering this computer was introduced when I was nine years old, there’s no reason at all for seeing this in a museum to make me feel old.

Another of the sculptures that I liked was this tiny metal cat.  This sculpture was only a few inches tall, and it reminds me of the kinds of tiny sculptures that my grandmother used to have around the house. Hers weren’t museum pieces, though.

The museum has a nice little gift shop attached, and I very nearly purchased one of these little fellows.  The originals were on display across the hall, but the gift shop versions were neat looking.  (And reasonably priced, too.) 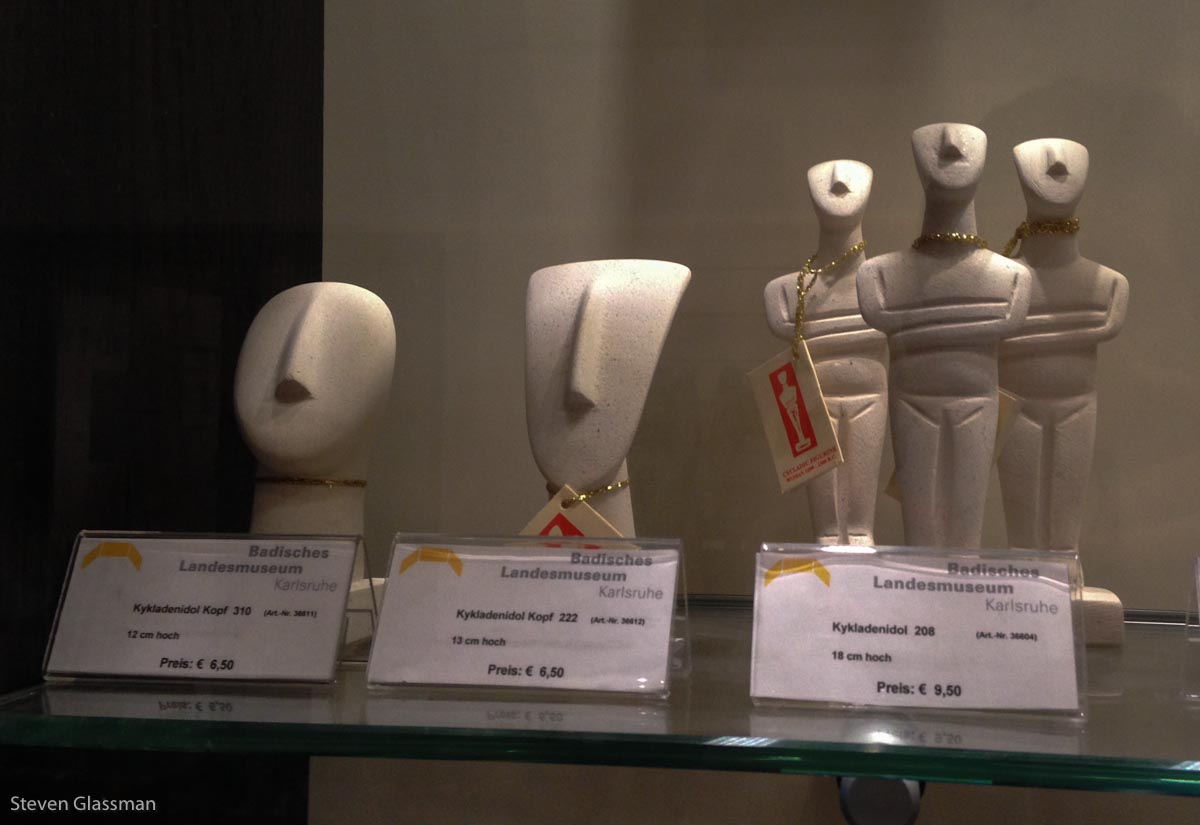 Have you ever been to Karlsruhe?

Halloween isn’t really a traditional German celebration, but it has become more popular in recent years, especially with children.  Most people seem to think this is partially from seeing it depicted in American television and movies, and I suspect that’s a big factor.  Here, costumes are more commonly seen around Fasching.

I did find that there are a few traditions that are similar to Halloween’s origins in Europe, without being exactly Halloween.

Meanwhile, those of us who grew up with Halloween look for places to observe the holiday, and most of those places turn out to be bars and pubs.

Last night, I visited two in particular.  Murphy’s Law, the better of Regensburg’s two Irish pubs, was having a Halloween event.  The Piratenhöhle (Pirate’s Cave) was having a Zombie Halloween party.

In both locations, I saw lots of vampires, zombies, and pirates.  There were a few people dressed as Warcraft characters, one amazing Peter Jackson styled Orc, and more people with random fake bloodstains than I can shake a stick at.

My costume was not as well known as I expected-  roughly 90% of the Germans I ran into had no idea what I was dressed as.  Amusingly enough, only Americans and Canadians call him Waldo.  In the rest of the world, he’s Walter or Wally.  I also learned last night that I can walk around the Altstadt in powder blue pants, and nobody will bat an eye.  Oh, Germany, you make me laugh.

A few people I passed exclaimed “Hab dich gefunden!” (Found you!) as I walked past, so that was gratifying.  And kind of hilarious.