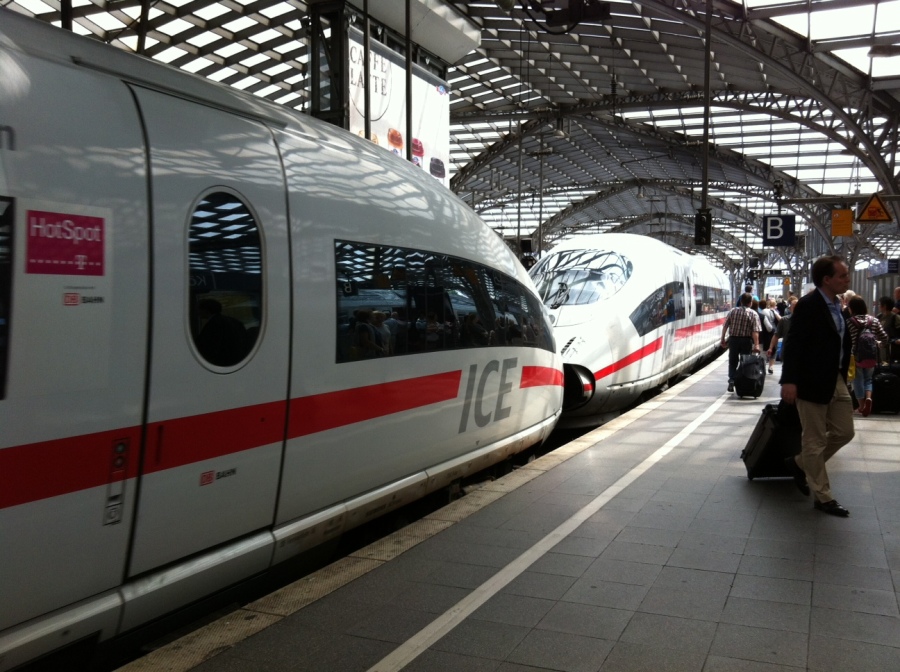 December 2020 Update:  This post still gets a lot of visits, so I feel the need to say this:  The post that follows was written in March of 2013, while I was still living in Germany.  I moved back to the US at the end of 2014, and while I still ride the DB when I’m visiting, I cannot say with any certainty that this seven-year-old post is still accurate.    Please also bear in mind that I do not work for, and have never worked for, the Deutsche Bahn.  I am merely a happy passenger on their trains when I’m in Germany.  Happy travels, friends!

One of my favorite things about living in Regensburg is that we’re situated on a major rail line. From here, there are direct lines to Munich, Nuremberg, Frankfurt, Vienna, and Prague. That’s just without changing trains. If you don’t mind changing trains once or twice, you can go nearly anywhere on the continent. It’s a great way to travel.

Step One: Book Your Trip

While you can get your train tickets from automated machines in the train station, or from a Deutsche Bahn counter, it’s generally advisable to do this ahead of time. The DB has a very excellent website in multiple languages, as well as a series of great apps to serve this purpose. It’s not much different than arranging air travel at this point- You can search with criteria like arrival or departure time, number of connections, and so forth.

The Website has also recently added a seat selection option to the booking process. The brown bars in the screen capture below are tables, so you’ll be sitting facing someone else. The boxed off sections toward the right are compartments with a door between you and the aisle. Click for a bigger view.

Step One Point Five: Choose Your Type Of Train

While you book your trip, you should bear in mind that there are a number of different types of trains in use on Deutsche Bahn rail lines.

In the picture below, you can see four different DB train types. The trains are, from left to right, an ICE type one, an ICE type two, an RE, a RB, and an ICE type three. The type three is the newest and fastest type. 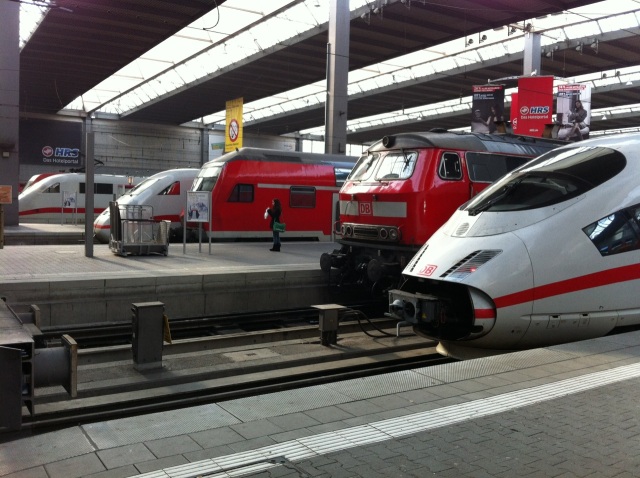 I’m a huge fan of the ICE trains. Here’s two more pictures of them. First, an ICE-T train. The T stands for ‘Tilt.’ All the newer models do this, actually. The upper portion of the train is designed to tilt to allow for high speed navigation, even on curves. The practical result of this for me is that my trips to and from the bathroom on an ICE train while the body of the train is tilting back and forth are often high comedy.

Here’s another close picture of an ICE type three, because they’re amazing.

Why do I think they’re amazing? Well, they’re quiet, they’re comfortable, they have power plugs on the seats, and they’re fast. On newer, straighter sections of track, they can do this-

You read that right- that’s 300 Kilometers per hour. That’s 186 Mph. And they can go even faster, if the track is straight and smooth.

One more thing that’s kind of interesting to me- in the picture of the ICE Type 3 above, the coupling is covered by a white shell. However, sometimes you see them uncovered, like so:

That’s because ICE trains can be coupled together for longer hauls, making the single train double the length of a normal train. This is particularly useful when both trains share half a route, then get uncoupled at a major station before going to separate destinations. Here’s what they look like coupled together:

Step Two: Go To The Station

The main train station in any city is called a Bahnhof. In cities that are large enough to have more than one station, the main station is called a Hauptbahnhof. Bahnhofs always have clocks on them, for some reason I haven’t been able to learn. Here’s the front of the Frankfurt Hauptbahnhof:

Every Bahnhof has display signs which tell you information about upcoming departures, including the Gleis (track or platform), destination, and departure time. There’s a big departures board inside the Bahnhof, and once you get to the actual platform, there are usually smaller signs to provide more information, like this one:

In the picture above, you have the following information:

If there are any announcements or indications that your train is late, they’ll generally be notated on the boards. In the picture below, the scrolling text with the white background tells us that the train to Dortmund is actually running five minutes late.

Sometimes, you luck into an older station with the charming flip-board version of this sign. While they don’t have as much information, I think they’re really nifty and I quite like seeing them. 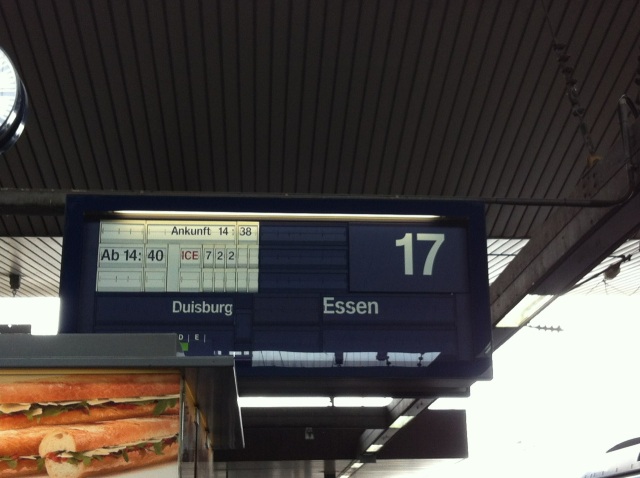 On RE and RB trains, you can’t reserve seats. On those trains, you just have to make sure that you don’t wander into a First Class car with a Second Class ticket. The cars are clearly marked with very large 1 and 2 signs, so that’s pretty straight forward. Some of the RE trains use double-decker cars with a lot of seating, like this next picture.

For ICE trains, however, you can usually get reserved seating- this is especially nice on crowded routes. When you have an ICE reservation, your ticket will specify a Wagon and a Seat. That’s where these signs come in handy. It’s difficult to capture this in a clear picture, but the car itself tells you that this is Wagon 23, on ICE 29 between Frankfurt and Wien (Vienna). The giant 2 to the right of that display tells you that this is a second class car.

Once inside you’ll need to find your seat. If you do have a reservation, the seats will be marked by a small electronic displays somewhere above each pair of seats. If the display is blank, there’s no active reservation. The reservation display pictured below shows you that the window seat, #46, is reserved from Bochum to Nürnberg, and the aisle seat, #48, is reserved from Köln to München. Hypothetically, if you were planning on getting off the train before Köln, you could use seat #48 without much of a problem since that reservation starts with someone boarding the train in Köln.

Once you’ve got your seat sorted out, you can try to stash your luggage. Most of the trains have some form of overhead storage, but it’s not always big enough for a regular suitcase. The pictures below are four different views of ICE train interiors. 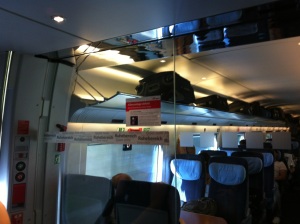 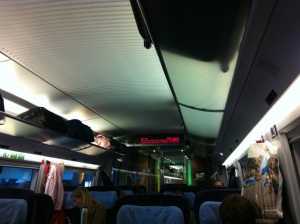 There’s not much else to add, really. DB trains are generally very smooth. Sure, yes, sometimes delays happen and weird things make travel a little more complicated. For the most part, though, this is a great way to travel. You can get from Regensburg to Frankfurt in three or four hours while reading on your Kindle, or you can stare out the window at the countryside passing by.

If you get hungry, most ICE trains have either a Bordbistro or a Bordrestaurant, and even the RE trains often have a snack cart passing by periodically so you can get something to eat while in motion. The Bordrestaurants often have hot food available, in a small fixed menu. You can see a few options in the photo below- when this picture was taken, chili, a rice dish, currywurst, a simple salad, and even some desserts were available.

So there you have it- a beginner’s guide to riding (and enjoying) the Deutsche Bahn. I could go on a great deal longer about this topic, because I love riding the rails I think this is a good place to stop, though- this post should cover the basics. Now go forth and ride! Travel somewhere this weekend! Gute reise!

Which do you prefer- trains, planes, or automobiles? Have you traveled by Deutsche Bahn?

84 thoughts on “ICE, ICE, Baby! (A Beginner’s Guide To The Deutsche Bahn)”