This post is tangentially related to the December 27th WordPress Daily Prompt.

“Your personal sculptor is carving a person, thing or event from the last year of your life. What’s the statue of and what makes it so significant?”

I was already thinking about the words that follow, even before I saw the prompt.  While I didn’t write this post specifically to answer the personal sculptor question, I am going to talk a great deal about something that has shaped my world the most for the past year.

Back in 1993, there was an episode of Star Trek: The Next Generation called “Second Chances.”  The basic plot is as follows-  The Enterprise goes to retrieve some scientific data from a planet which has an impenetrable distortion field around it.  Once every eight years, the field is weak enough to beam through it.  Eight years previously, a younger Lieutenant Riker was the last man to beam out when his team was forced to abandon the post.  When the modern-day Enterprise arrives, Commander Riker leads the away team, and meets- himself. 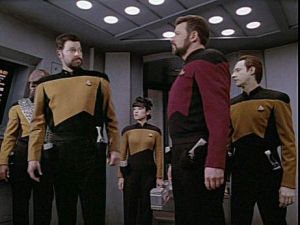 Although Riker made it up to the Potemkin and continued his career, a transporter phenomenon caused an identical Riker to rematerialize on the planet.  This Riker believed that he’d been left behind, and he spent the next eight years living alone.

The reason I’m talking about Star Trek on a blog about life in Germany is because it’s kind of the same thing.  Obviously I don’t mean that I was duplicated in a transporter accident, but there is some similarity between that ludicrous scenario and how I feel.  What the other Riker went through was, at certain points, textbook culture shock and acculturation.

While I was in the United States a few weeks ago, I was struck by the notion that while I’ve been living my life in Germany, life in the US has been going on without me.  This is the truest and deepest cost of being an expatriate. Friends and family kept going on-  my youngest niece started walking and talking.  Another friend is nearly done with law school.  People have gotten engaged.  Couples have split up.  Some of my friends have had massive shifts in their health, some for the better and some for the worse.  There are new pets, new jobs, and new hardships.  And while I was in Germany and away from all of this, there was a tiny part of me that went on living in the US, along with my friends and family.  There are two Stevens now.  They are entirely alien to each other.

I spent most of my first year in Germany feeling like I was on an extended vacation, but one where I just happened to be going to the office a lot.  It felt like my life in the US had just been paused- waiting for me to return to it.  My apartment has never quite felt like my apartment, and I’ve always been just a little bit of a stranger in a strange land.

It’s been more than a year now, and in the intervening time, I’ve felt less like that US life is mine.  The drift has begun-  I don’t speak to people in the States as much as I did in the first year. There are some people who I once considered my closest friends and confidants who I speak to now only via electronic means, and only regarding superficial topics.  If not for the horrible abomination that is Facebook, I would have lost touch with almost everyone except my closest ring of family members and a few dearly cherished friends.

There is even a physical component to this drift-  while I was in the US, I moved my few belongings to a much smaller storage unit.  In order to do that, I had to let go of a lot of possessions.  Most of my kitchen goods from the US are now gone.  Everything I own in this world is either in a 5×5 storage unit in Florida or a 45 square meter apartment here in Regensburg.  Considering I used to have an entire condominium full of crap, this is kind of a sobering realization.

I don’t feel like this Bavarian life is mine either.  I’ve made friends here, but making friends as an expatriate can be a little tricky-  most of us are transient.  You never know if someone you’ve met will still be there to talk to or hang out with in six months or a year.  I’m even hesitant with the locals, the people who aren’t going anywhere, because I don’t know if I’ll be here in a year or two.  My contract is written through the fall of 2014, but there’s nothing in it which says that Mr. Company can’t recall me to the United States sooner.  (They probably won’t, but it’s something that I think about.) There’s also the chance that they’ll want to renew my presence here at the end of the contract on a yearly basis.  I’m not sure how I feel about that, to be honest.  I get asked a lot if I want to stay here at the end of my contract, and my answer is always a little timid:  “Ask me again in another year and a half.  A lot can happen in a year and a half.”

For night now, I’m stuck in the middle.  Beholden to two countries, but not truly feeling at home in either one.  I am the two identical Rikers, both fighting to claim the right to be the real one.