As of today, I’ve been in Germany for one year of a three year commitment.   It’s been a hell of a year.  When I posted about being here for four months back in March, I had a few items that I listed as to-do items.  Let’s see how I did:

Have basic conversations in German:  On a very basic level, I can do this.  I can introduce myself, ask where someone is from, and inquire about basic information.  I have the vocabulary of a two year old native, but I’ve learned a lot.

File my German taxes from 2011: I did this in late March.  In July, the Finance Authority sent me a letter asking for more documentation, and I returned the requested document right away.  In October, they finally sent me a followup, and a small refund a few days later.  I am now the proud owner of a German Steuernummer (tax ID number.)  It only took seven months!

More blogging: I’ve settled into a pattern of posting every Monday.  Coming up with ideas for new posts is difficult sometimes, but for the most part I’ve always got something new to say.  Sometimes I have a rush of ideas and I post a little bit more frequently, but I post at least one new entry every week, always on Monday mornings.   WordPress.com’s scheduled post feature is a tremendous boon for the frequent traveler.

More travel:  Holy hell, success!  Of the thirteen cities I mentioned back in March, I’ve been to seven of them.  This year has been an amazing year for travel.   Every new city is logged as a ‘Category’ on this blog.  There’s a dropdown on the right-hand column to view entries about them.  In 2012, I’ve gone to seven new countries and countless German cities. 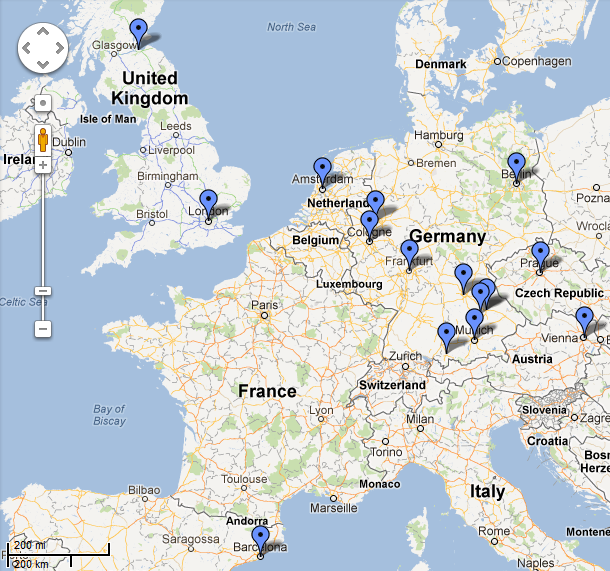 Eat Less McDonald’s:  Mild failure.  It’s still far too easy to slip into McD’s when I’ve been out late or have to eat something after German class.  I try my best to keep it to a minimum, but I still eat far too much of this because of the convenience.

Acquire a traditional Bavarian outfit complete with Lederhosen: Yup, I did this. 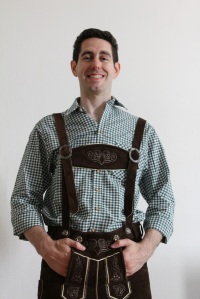 I originally wanted to list a whole lot of the things that I’ve accomplished this year, but I did that on the Four Months post and again on the Six Months post, so I won’t do that.   Here’s a few other highlights that I wanted to mention though:

I Went To WEBMU: WEBMU is the “Whiny Expatriate Blogger MeetUp.”  The rules for membership are that you have to live in Germany and blog in English.  The people in the group are a heap of fun, and we had a great weekend in Berlin.

I Met Other Bloggers: Expatriate blogging is a very social thing. Between WEBMU and my naturally social nature, I met many other bloggers (and their non-blogging spouses) in person this year. Here’s an incomplete list of them:
Riayn in Hamburg, Heather in Nürnberg, Mandy in Berlin, Sarah in Hamburg, Snooker In Berlin, Ian in Hamburg, CN in Heidelberg, and last but not least, Cliff and Sarah here in Regensburg.  (Alex, you’re totally on my “Want to meet this person” list for 2013.)

I Tried A German Theme Park: I went to Phantasialand, a pretty well known German theme park.  Living in Florida spoiled me for theme parks, but this was still a lot of fun.

I Listened To  A Percussion Show In A Cave: The header on this one is pretty self explanatory.  The cave, the Tropfsteinhöhle Schulerloch, is near Kelheim.

I Drank Beer Brewed By Monks:  The Weltenburg Abbey is not far away.  The dark beer is delicious,  the grounds are beautiful, and the boat ride up the Donau river from Kelheim is picturesque.  Not a bad way to spend a Saturday.

I Watched More TV and Movies In German:  I have been trying to learn German, and one of the things that helps this is to use German television, radio, and movies.   I’m quite fond of watching How I Met Your Mother and Futurama in German.  I also watched The Lion King, The Muppets, Men In Black 3, and Ice Age 4 all auf Deutsch.  I was even able to clearly follow the plots of all of them, even though I missed quite a few of the verbal jokes.

It’s pretty hard to sum up an entire year in a single post- that’s what the entire Blog has done.  It’s mind-bending to think that I’ve been here for a year already, and that I’m a third of the way done with my time here.

I wonder what my next year has waiting for me!

As of today, I have been in Germany for six months- I arrived on Saturday, November 12th. During that time, I’ve been keeping a list of things that I wanted to mention on the blog, but that aren’t long enough to carry their own blog post. Here’s what I’ve got so far:

Since I arrived, I have:

Things that are still very much on my to-do list: