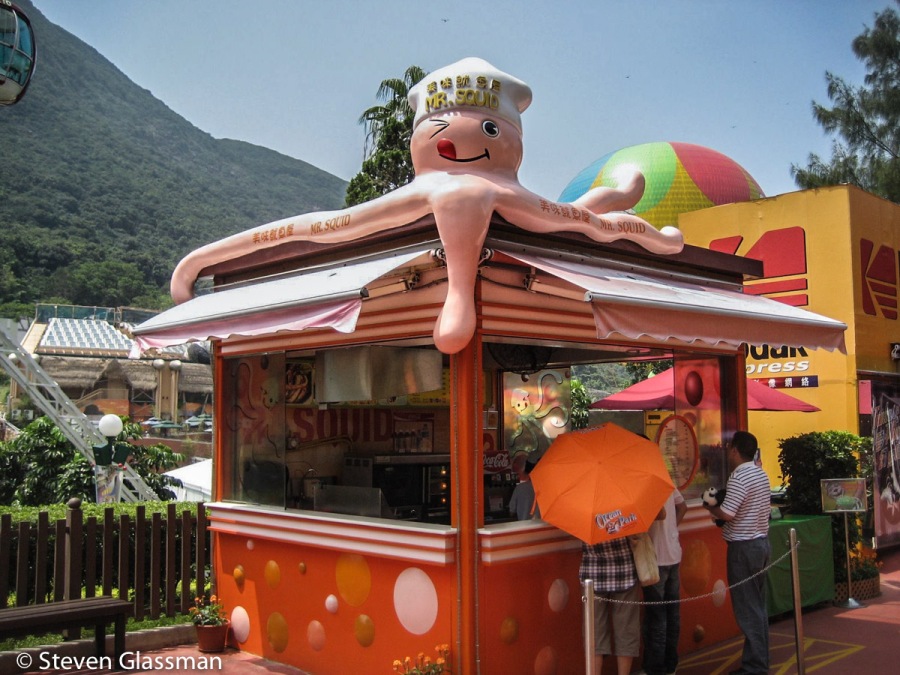 Author’s Note: This is one of five posts looking to the past, to my trip to Hong Kong in September of 2008. Some of the details may be a little fuzzy because it was twelve years ago.

In that regard, I was not disappointed.

Ocean Park considers itself a marine mammal park, oceanarium, animal theme park, and amusement park. It’s really got a little bit of everything.

I didn’t see many marine mammals, there, but I think there was an Orca show that we missed. Here’s a couple of seals.

Apropos of nothing, Ocean Park is home to the single most entertaining bathroom signage I have ever seen. If there’s a sign, you know people were doing it.

There was a jellyfish enclosure, with a lot of the little floaters swimming past.

They also had a panda enclosure, and the signs pointing the way to it were just absolutely freaking adorable.

The entrance to the panda enclosure was lined with these corny panda bears. No, I don’t know why. It sure is cute, though.

The pandas themselves were basically giant oreo-colored goobers. We saw one fall out of the tree he was climbing, because he just didn’t care.

I shall caption this next photo, “munch munch munch.”

There was a cable car connecting the two sides to this park. A lot of the park was under construction when we were there- looking at the Ocean Park site as it exists today, I can see that they’ve added a lot in the last twelve years. They have penguins and meerkats! (Thankfully, not in the same enclosure.)

I may need to go back at some point. In the years since we visited the heavily-under-construction Ocean Park, they have opened:

The cable cars took us from the animals to the rides.

The crest of the cable car line had a pretty nice view.

And then we were able to see the theme park rides ahead of us.

Once we were off the cable car, we could wander a amusement park side, between snacks and rides and things for kids.

This was a culture show with acrobatics and the like.

There were the usual thrill rides. I actually did go on the old roller coaster, which has since been converted to a virtual reality coaster. No, I don’t know what that means either.

One of my favorite things at this entire park was the adorable squid vending kiosks.

…and the squid design isn’t just to be cute- they actually sell squid there. By the way, don’t let those prices throw you off- $32 Hong Kong dollars is just over four bucks of US currency. The combo with soft drink for $42 HK dollars is about five and a half US dollars. That exchange rate is crazy. 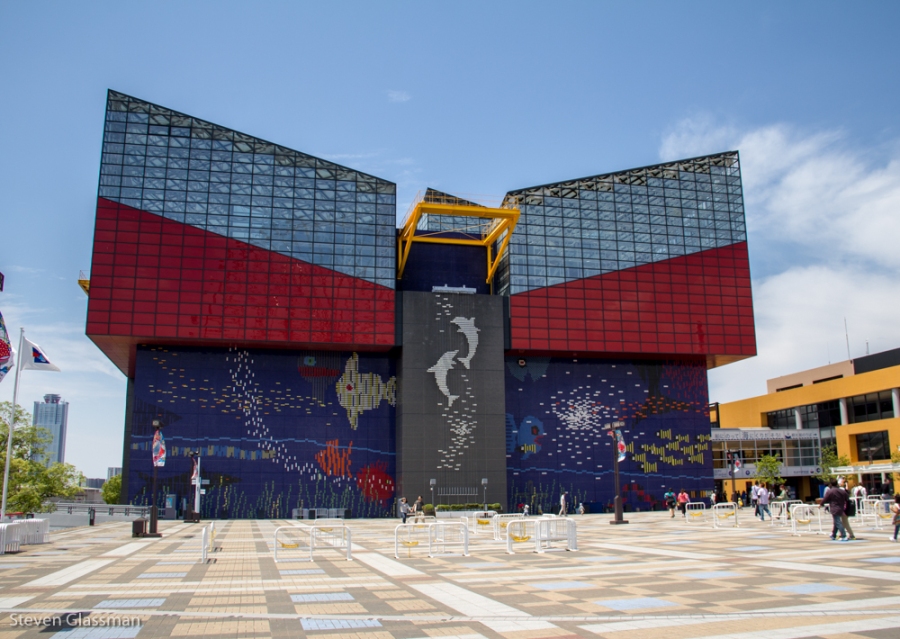 Before I left Osaka, I took a quick detour to the Osaka Aquarium Kaiyukan. 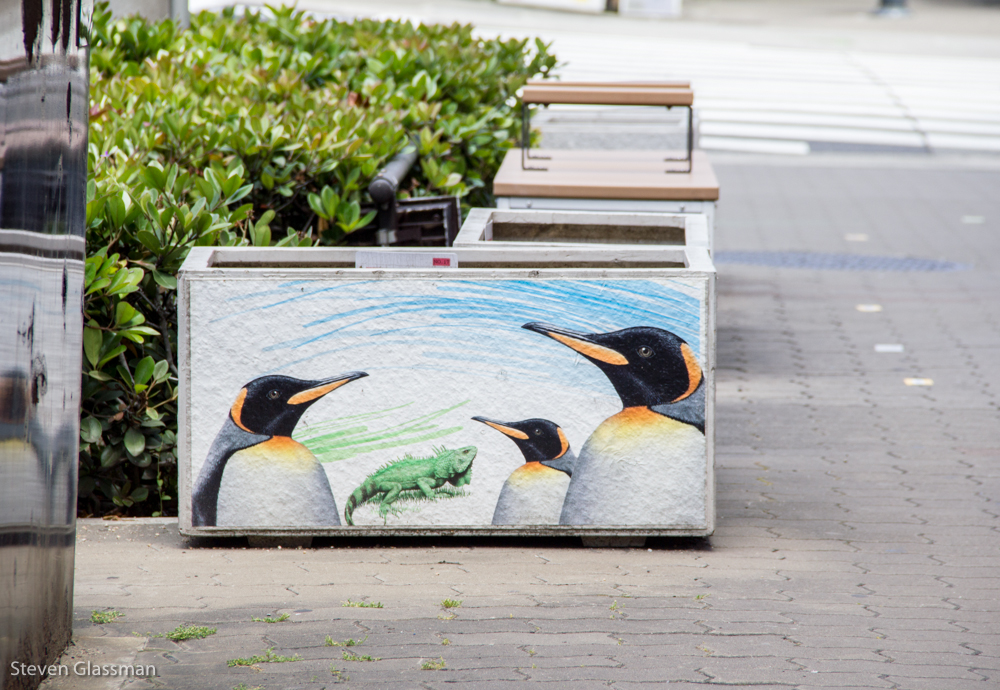 Between the rail stop and the aquarium entrance, there were themed paintings on flower boxes and the like. 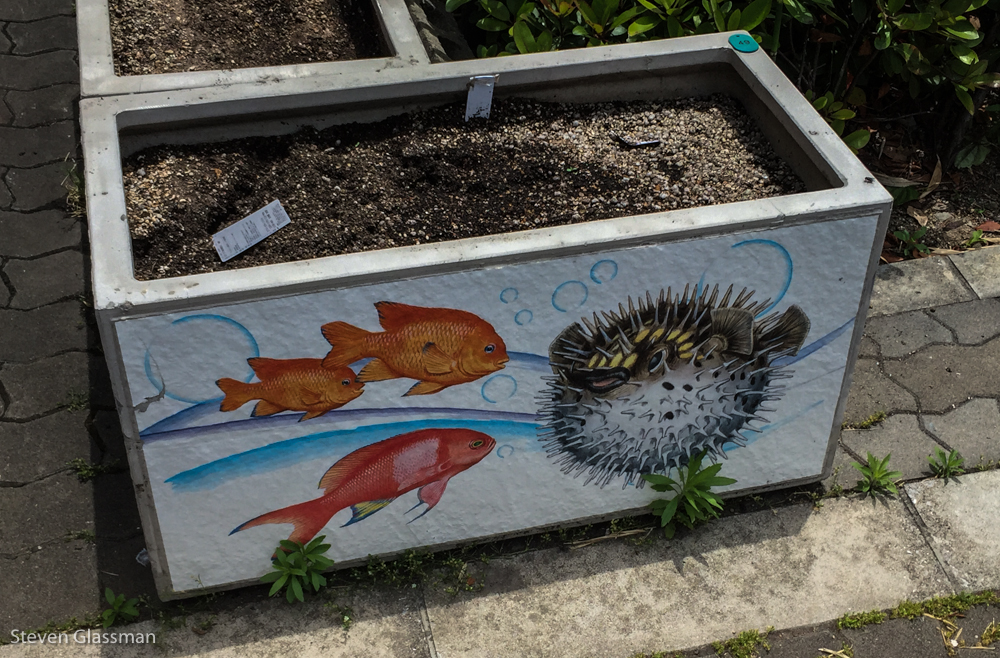 The aquarium building itself looks a bit like a whale tail.  This is probably not an accident. 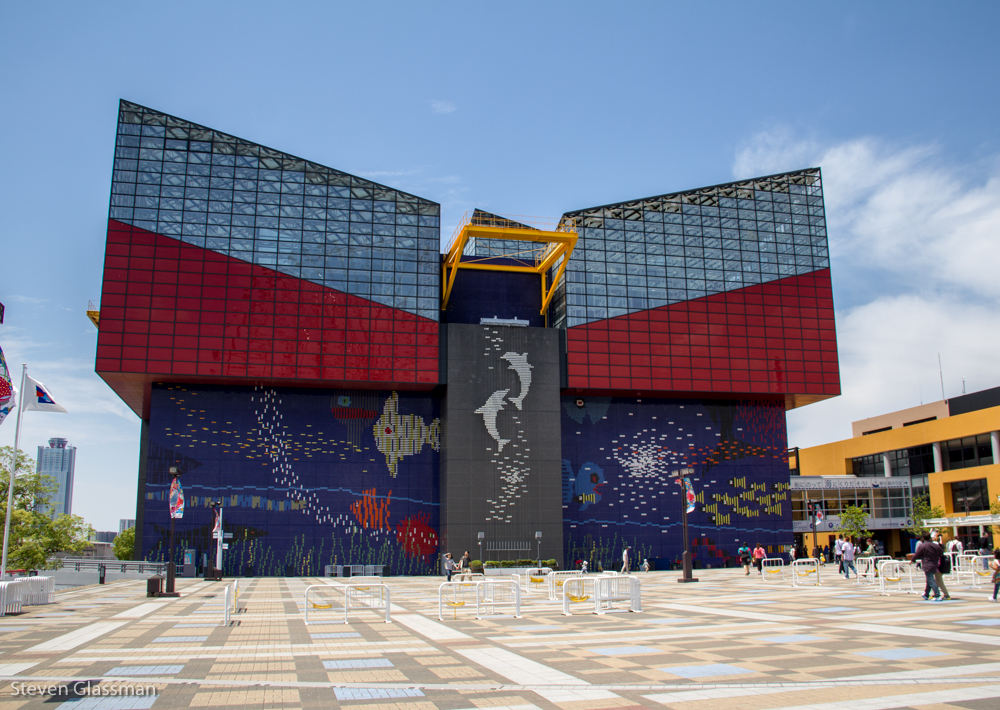 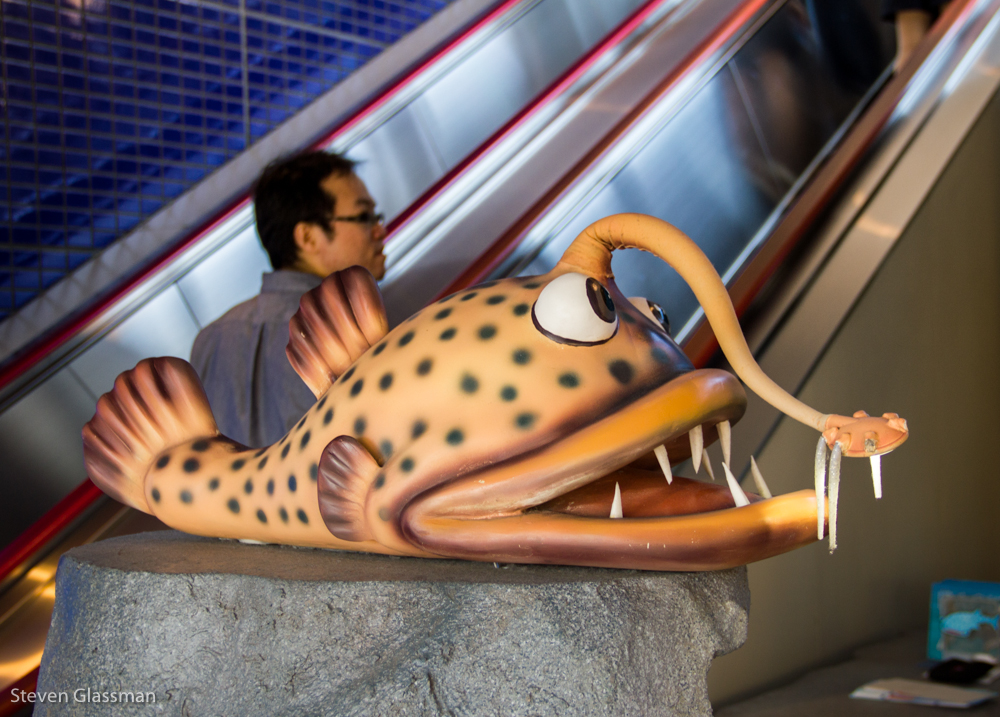 Most of my favorite things in the Osaka Aquarium were not fish at all.  For example, this little guy is an otter.  He was doing barrel rolls in the water. 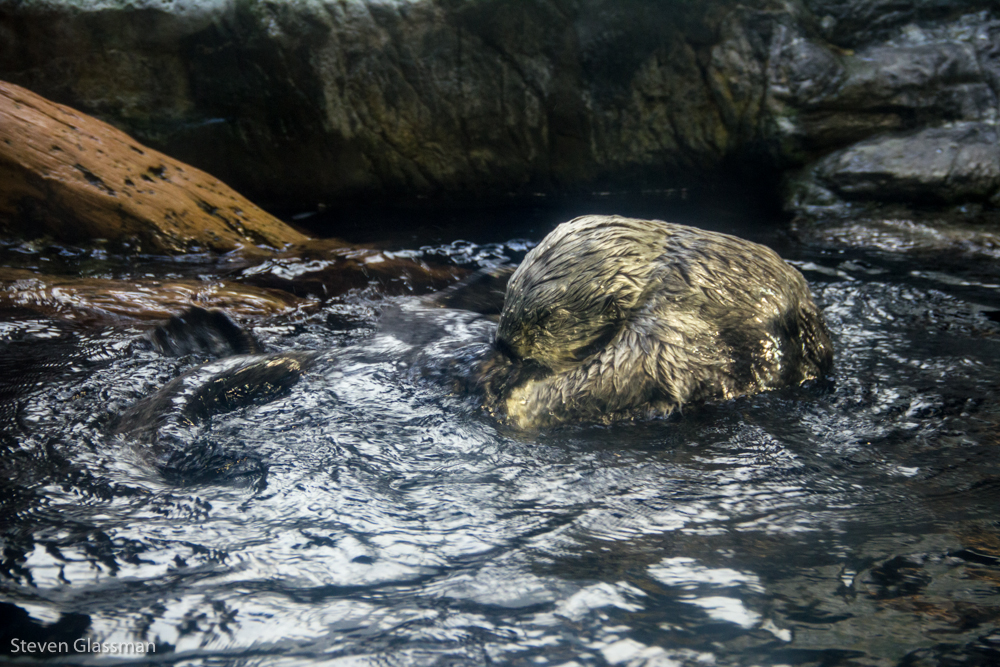 Nearby is a seal doing seal things. 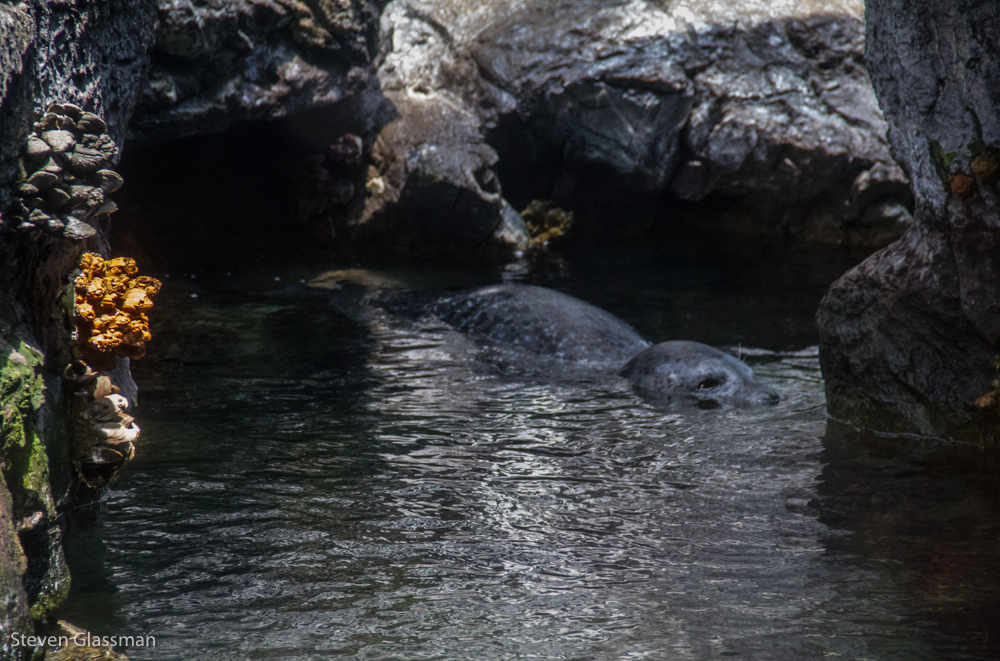 The aquarium is home to an entire tiny colony of Gentoo penguins. 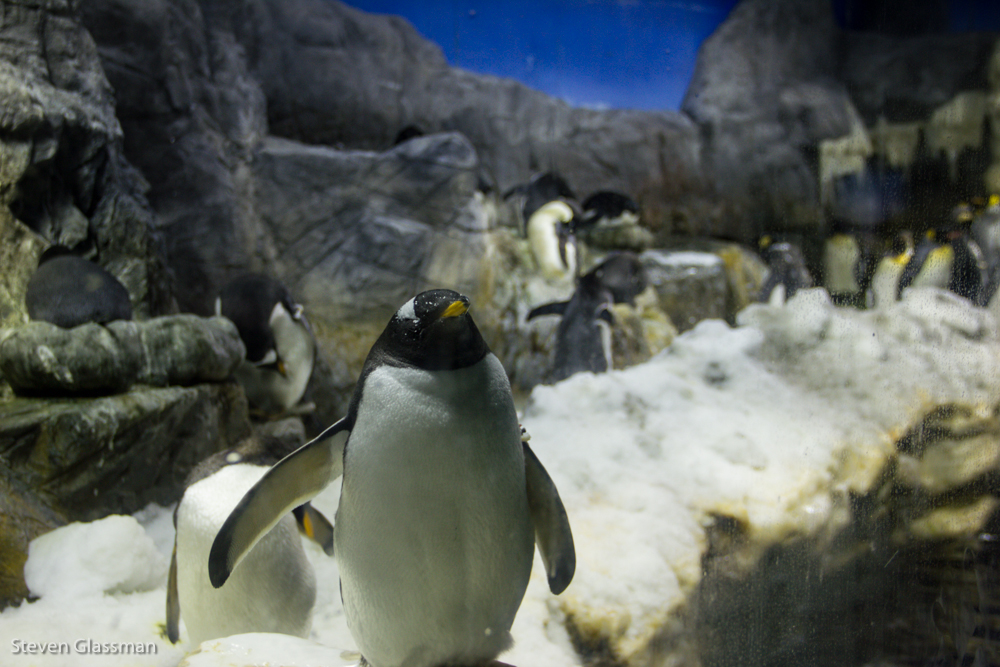 …and one juvenile whale shark. 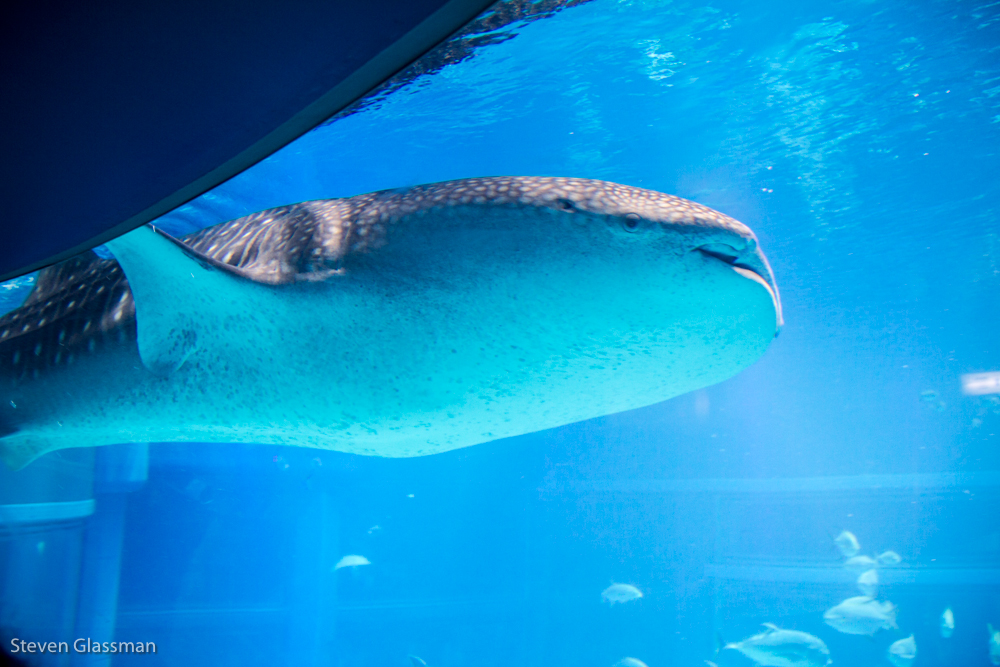 This spotted fish was the main reason I wanted to come to the aquarium.  I hadn’t ever seen a whale shark up close before. 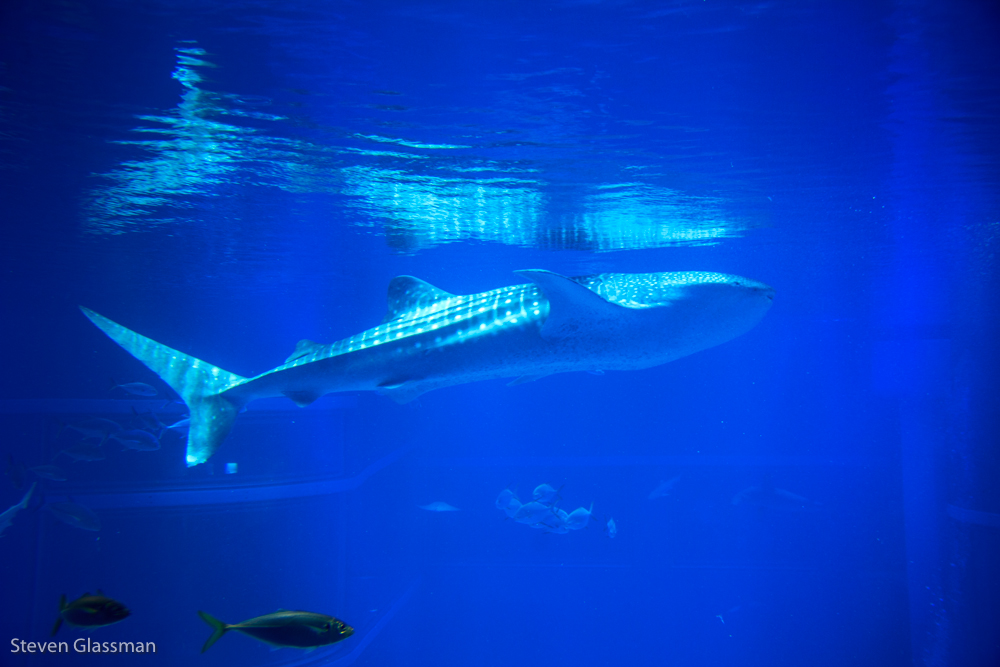 The whale shark swims in the aquarium’s Pacific Ocean tank, which is also home to bluefin tuna and many other very large fishies. 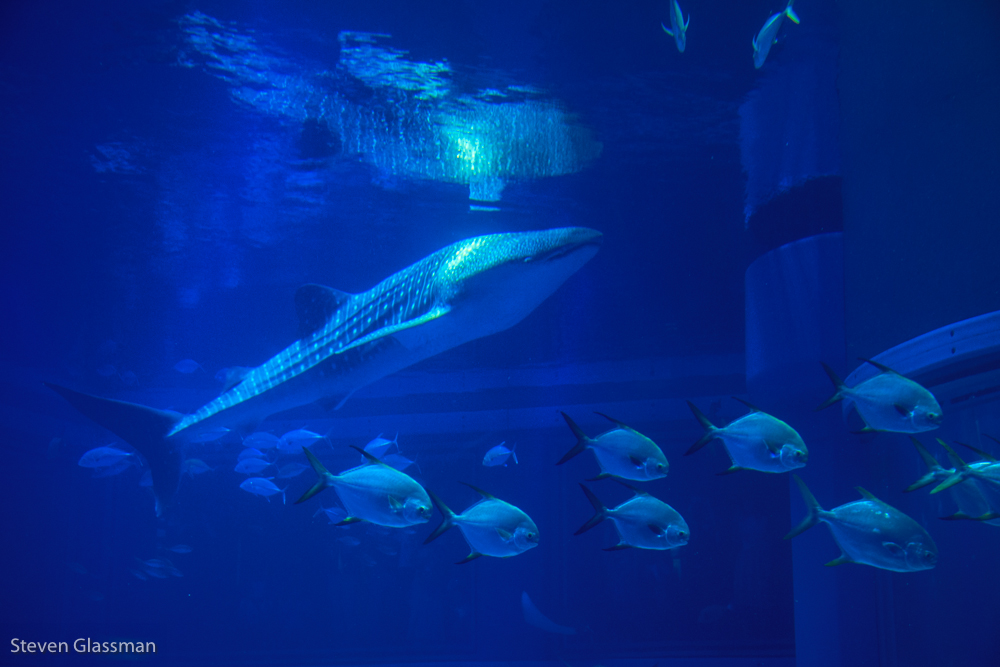 This seal was very interested in what was happening on our side of the glass. 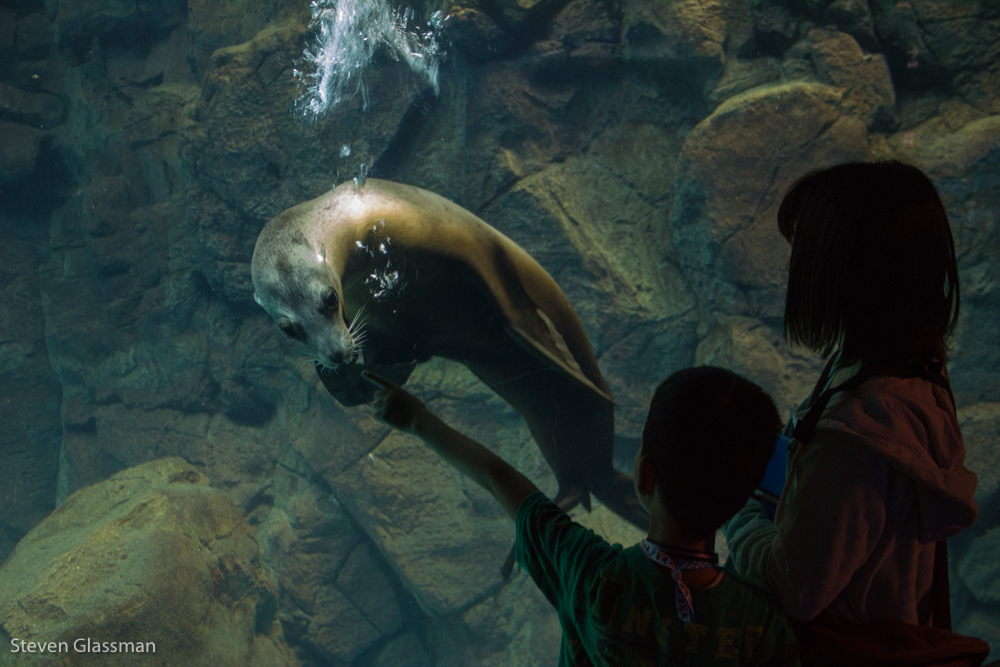 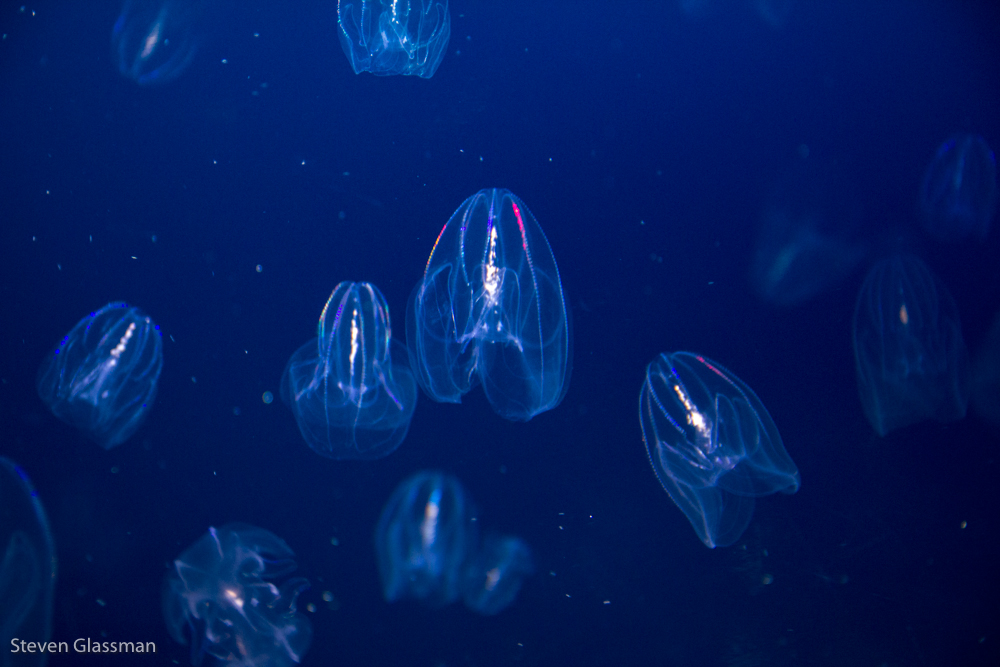 My brain keeps wanting to label these cuttlefish as “scuttlefish.”  Do you suppose there’s a cuttlefish in charge, telling them which direction to point? 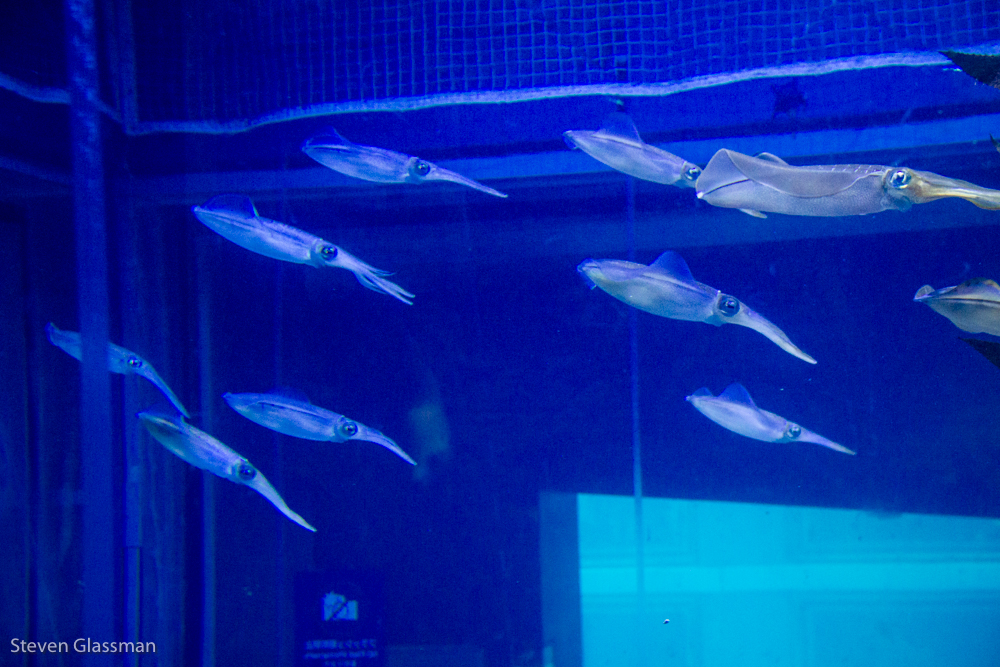 This crab is facing a tank wall which appears mirrored because of the light inside the tank.  In my head, I hear his little crabby voice doing his best Pacino impression. “You talking to ME?!” 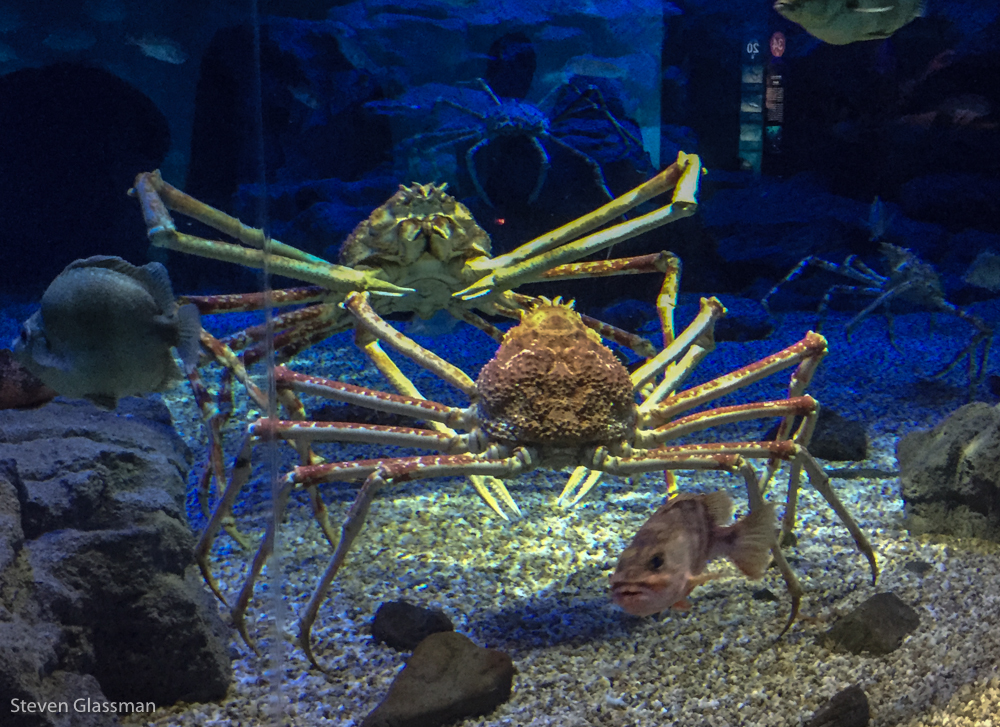 Approaching the exit, there was a small group of very smelly Rockhopper penguins. 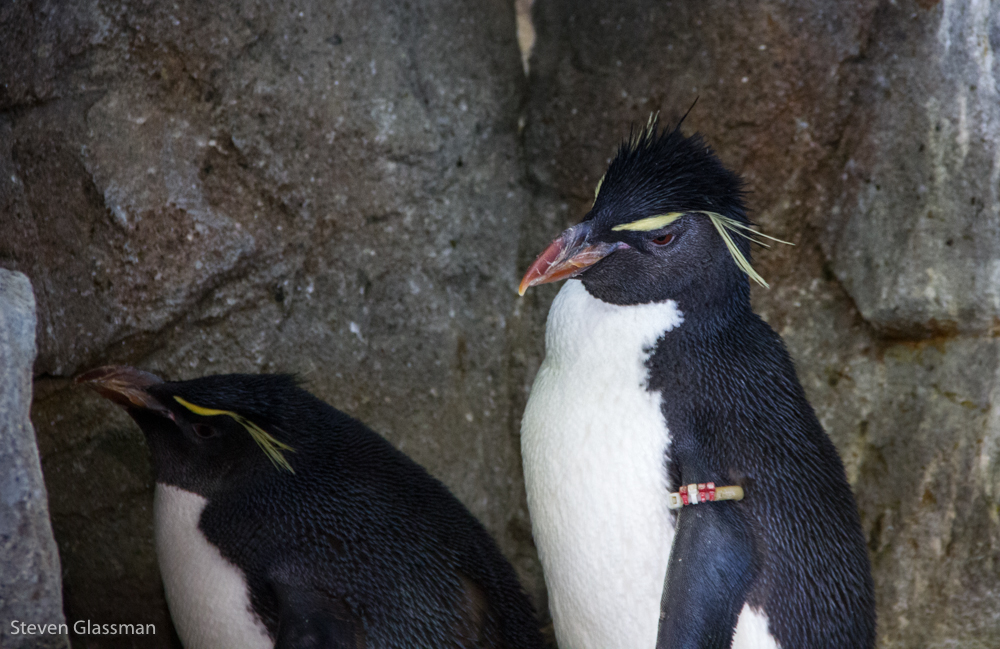 …and one very chubby seal. 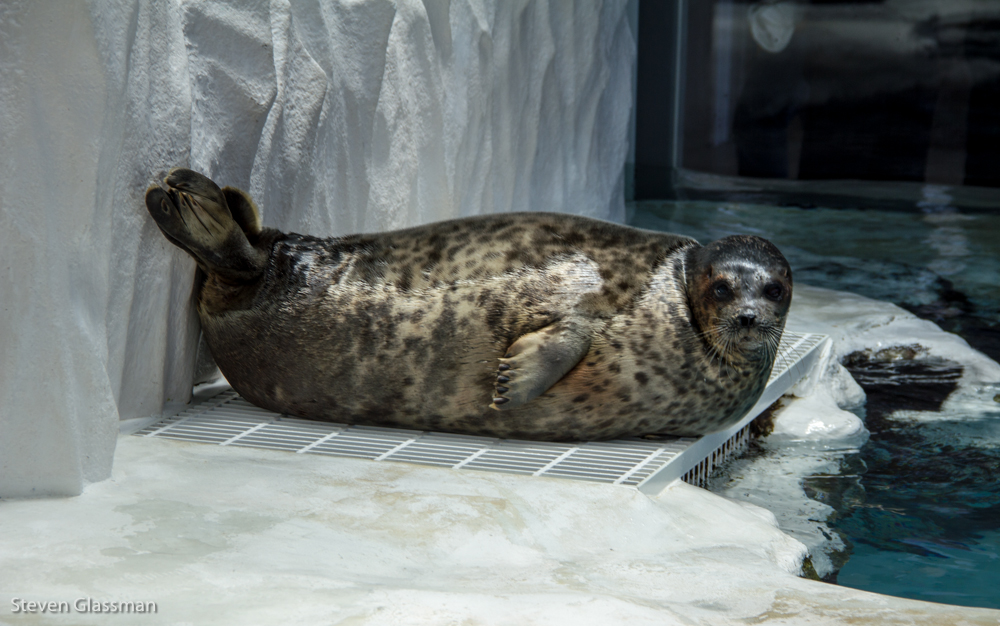 I also took a bunch of other fish pictures, but the photos in this post are the ones which I thought were the most visually interesting.