I love the “What We Spent” posts that Ali writes when she travels, and I wanted to do one for my side trip to Linz, Austria last month.  Alas, I didn’t track my spending very accurately.    I can tell you that I spent somewhere around sixty euros for all my food in Linz, and I can tell you that I spent €12 on a ticket for an art exhibition, which I will come back to later in this post.  I also spent around ten euros for various public transit needs around the city, €6,30 of which was just for the Pöstlingbergbahn.

It turns out that tracking my spending in such minute detail isn’t really my style, so I’ll leave that to Ali and go back to doing what I do best-  posting waaaaaaaay too many photographs.  Seriously, I came back from a twelve day trip with roughly five hundred photographs, and I did not take a dedicated camera.

While the overall trip ran about twelve days, I was only in Linz for about a day and a a half.  I started off on Tuesday morning from Regensburg, traveling in one of my all-time favorite conveyances, a Deutsche Bahn high speed ICE train.

After I reached Linz, I dropped my bag off at the hotel and set out immediately to start my tourism.  Here’s the highlights of a brief visit to Linz.

Also known as the New Cathedral, this very enormous cathedral is the largest in Austria, although not the tallest.  The style is very similar to the cathedrals in Regensburg and Cologne, although this one only has the one spire.  It was really difficult to get the entire thing into a single photograph. 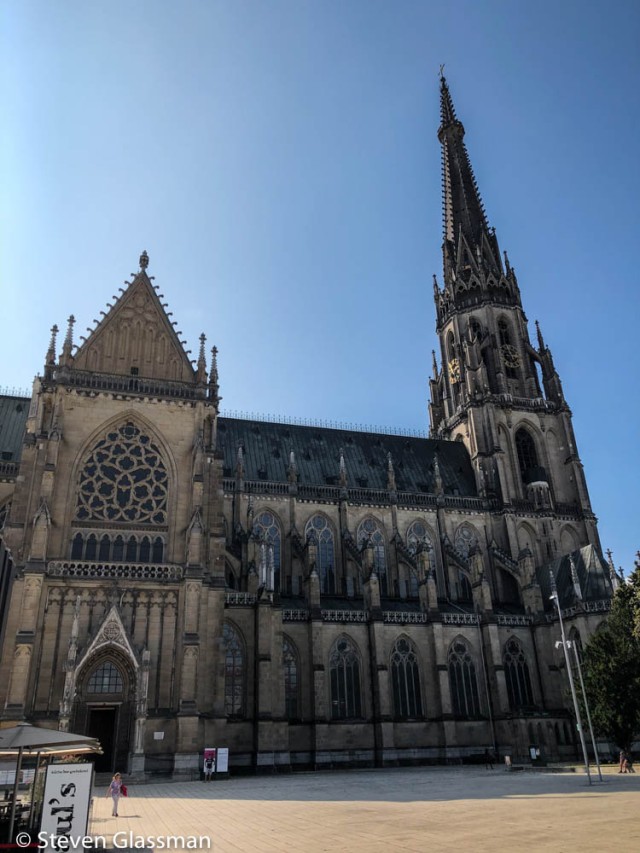 I took a bunch of pictures inside, but I think this one gives you a sense of the size while also showing you some pretty, pretty stained glass.

While I was in the city, I sought out the listed former homes of Kepler and Mozart.  The Mozarthaus is actually kind of difficult to spot because it’s part local government office (hence the Austria and European Union banners on the building) and part cultural location with shops and restaurants.   The only obvious sign I could find was a bust of Mozart and some commemorative placards just inside that archway.

The Kepler house was much easier to spot-  the sign over the door says that Johannes Kepler lived in this house, and the little one off to the right has a bunch more information.

I didn’t set out to find the Schubert sign on purpose, I just sort of stumbled across this one.  Basically, it indicates that Franz Schubert came here to visit family friend Josef von Spaun.  The bottom floor of this building now holds a Douglas, which is a perfume and cosmetics store.

Höhenrausch is an art exhibit that Linz puts on every summer.  This year, it runs from late May to mid-October.   The theme this year is “The Other Shore,” and everything has to do with water in some form.  There are regular exhibit rooms, but the true delight of Höhenrausch is that it winds its way over the rooftops of the city, through church and building attics, and up a custom-built tower.  This is the flyer they give you at the start, showing you the full path you take for the exhibit.

I paid my twelve euro admission, climbed over the starting barricades seen all the way to the left of this flyer, and moved onward.  On a nice sunny day, the views as you clamber over the rooftops are spectacular.

I’m curious to know whether these walkways stay up year round, or whether they build them anew every year like they do for the decks at Cave of the Winds at Niagara Falls.

After I first emerged on the outdoor portions of this exhibit, I saw the sculture man in the distance.  I didn’t yet realize how large he is. 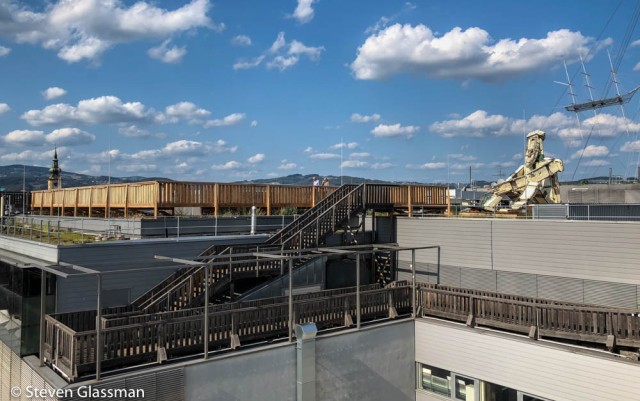 It had rained before and after my day in Linz, and this was a perfect day for this part of the trip.

As I got closer, I saw just how large the  sculpted man is.  His name is El Pensador, sculpted by Cuban artist K’cho.  He is made from the remains of Cuban fishing boats.

The tower behind El Pensador is called the Oberösterreich-Turm, which just translates to Tower Over Austria, I think.   Regardless, it was tall and I wanted to climb it.  Long time readers know that I always like to climb the tallest thing in any new city I visit-  I get a little bit King Kongy when I travel.  I wasn’t able to climb the spire at Mariendom because that’s only allowed during tours and my visit didn’t coincide with any tours. So, I climbed this instead!

Partway up the sculpture was “The Flying Ship,” said to signify a “new departure.”

Here’s one of the views from about two thirds of the way up the tower, looking toward the top of the Flying Ship sculpture.

Here’s one last look at the Linz skyline from the rooftops of Höhenrausch, before I head back inside.  Nice view of the Mariendom’s spire from here, don’t you think? 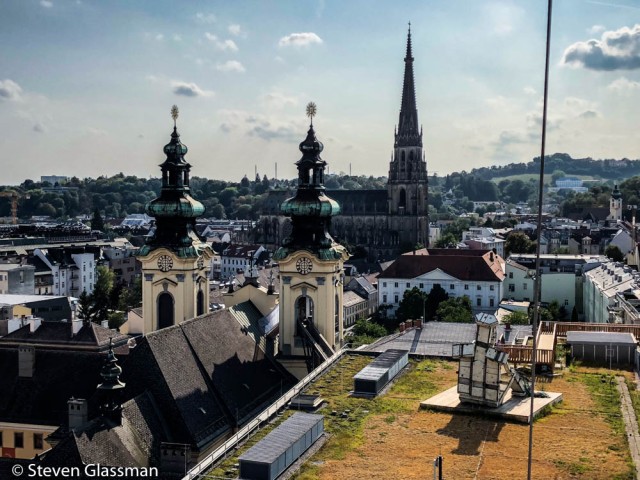 I took lots of photos of the art inside of Höhenrausch, but most of those photos were set aside before I started writing this post because I already had more than thirty shots to include.   Besides,  I feel like most of the art in this exhibit loses something in a still photograph.

Even this piece, “Uncertain Journey,” a dense network of woolen threads created by Japanese artist Chiharu Shiota, loses a lot of its impact in a single photograph.  Pretty neat though.  I wonder if this was created within the space it currently occupies, or if it was made elsewhere and then installed here.

These pictures are only a fraction of the Höhenrausch exhibit, and if you have a chance to swing by Linz before it closes in mid-October, I highly recommend checking it out.

Hauptplatz and the Trinity Column

Hauptplatz is one of the largest city squares in Europe, and it’s home to the Dreifaltigkeitssäule, or Trinity Column.   The column is a giant Baroque sculpture which was installed in 1723 as a monument to those who had died in plague epidemics. 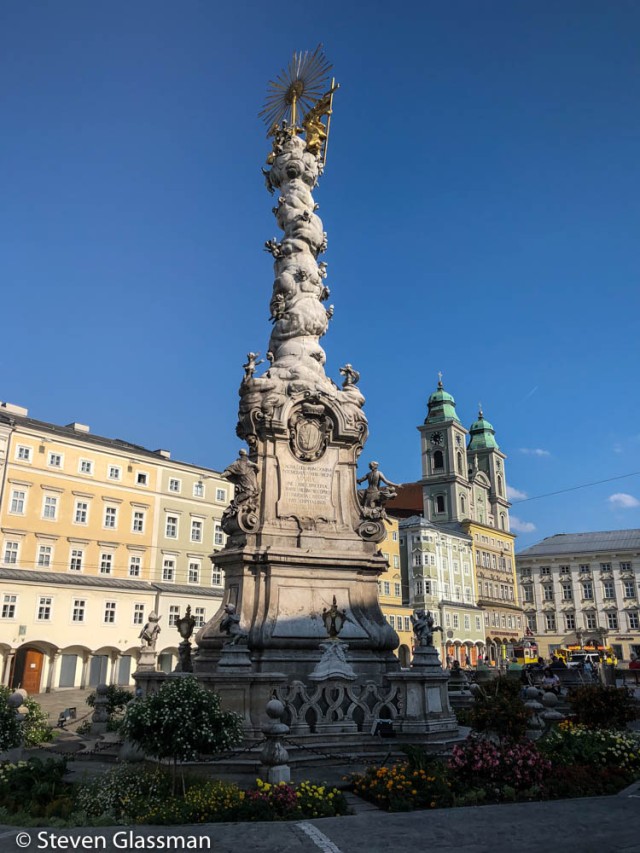 This building is in the square, and this interesting relief work on the building was directly over a restaurant.  I have no idea what the history is on this, but it looked pretty nifty.

Hauptplatz is also the launching point for this adorable little tour train that goes through the old city, as well as the end point for the Pöstlingbergbahn.

This is the door to the men’s room at the tram stop.  I just thought this was hilarious and kind of adorable.  And I cracked my head on low hanging stone at least twice trying to get a good photograph.  I feel like this is what it would have been like if Gandalf needed to take a whiz in the Shire.

When you walk out of the tram stop, there’s a sign to let you know that you are at the very border of Linz.

As you walk into Pöstlingberg, you quickly come across an open space that looks over Linz. 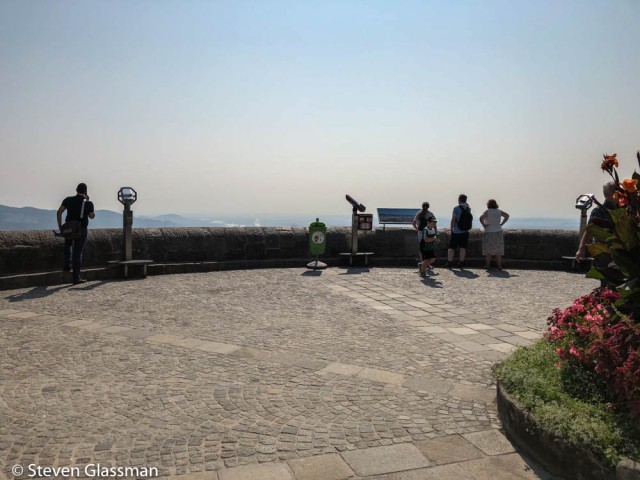 Pöstlingberg is high on a hill, on the bank of the Donau (Danube) river.  At 539 meters (1,768 feet,) the view of Linz is pretty great.  This was not the same day as the earlier pictures from Höhenrausch, and you can tell that this was a much more hazy day than in the Höhenrausch shots.

One of the big draws for families in Pöstlingberg is the Grottenbahn, a train ride geared toward small children.    As you approach it, fairytale creatures help to point the way. 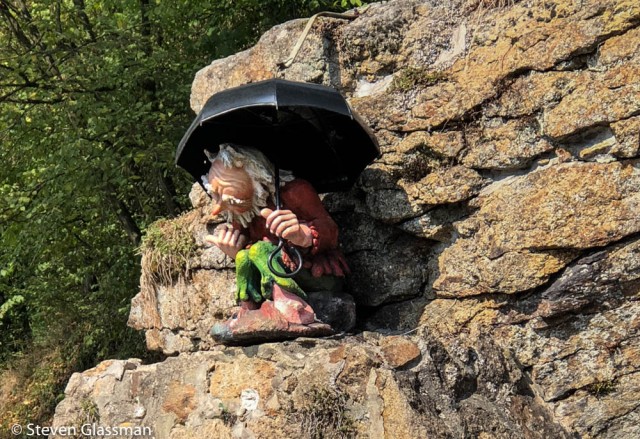 I found the entrance to the Grottenbahn, but decided not to ride because there was a pretty large number of small children already waiting to ride and I just didn’t feel like waiting.  I will say that the walkway leading up to it was cooler than the rest of the hilltop by several degrees, and this was a very refreshing place to walk.

The decorations on the entrance walkway give you an idea of what you can expect inside.

Another major point of interest in Pöstlingberg is the Pöstlingbergkirche, a large pilgrimage church built at one of the highest points on the hill. 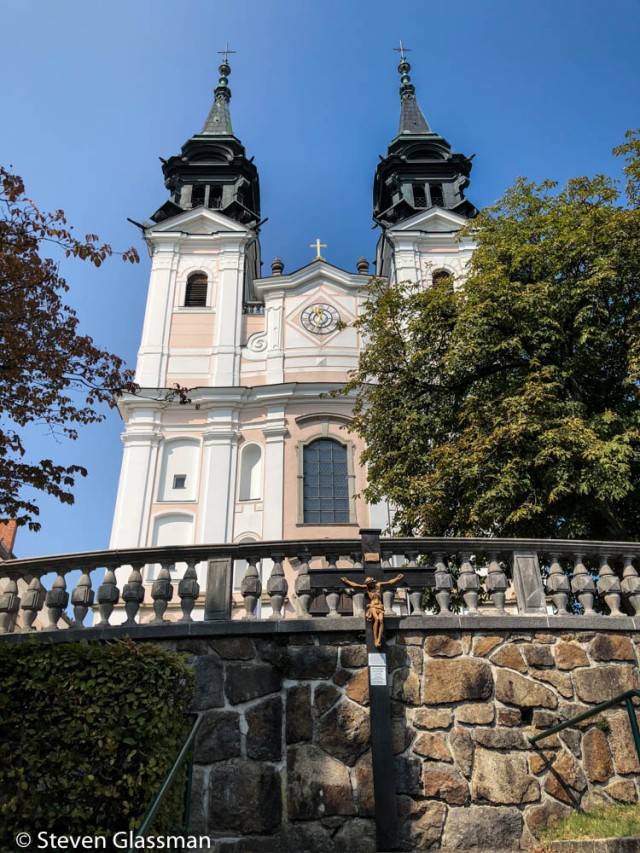 The walkway leading up to the door of the church has a fenced platform which has begun to collect Europe’s ever-present love locks. 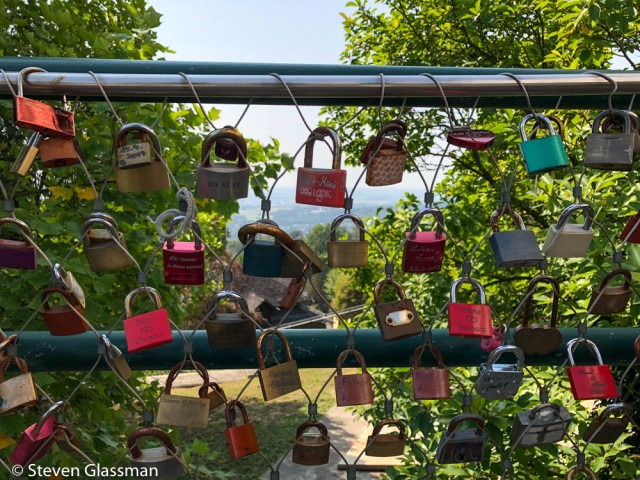 I honestly have run out of things to say about the inside of churches throughout Europe.  They’re all pretty ornate and they’re all very impressive.   And most of the time, the people I find inside them are tourists rather than congregants.

After I rode the Pöstlingbergbahn back down the hill, I got off the tram one stop earlier than Hauptplatz so that I could go to the Ars Electronica Center.  It’s a museum that has exhibits related to technology, and I was curious to spend a few hours checking it out.  I had heard that it was a really cool place to visit.

Unfortunately, it was closed.  I didn’t catch that on their website-  they opened up again about a week after I left.    I got to see the entry vestibule, but that’s about it.  Anyway, the building is right on the bank of the Donau, directly across from Hauptplatz, so I walked back over the river.

Four random pictures that don’t fall into the rest of the narrative for this post.

This street is Landstraße.  I spent a lot of time traversing this street because it was kind of central to everything else I was doing, and it led directly to Hauptplatz.  It was also the path that most of my tram usage required, including going to and from the train station.

I hate a couple of times at Deli-Linz while I was in town, and this was my favorite snack of the visit-  Peanut Butter Bread with bananas and cracked cocoa beans.  With a Fritz-Kola.  Sehr lecker.

Last, but certainly not least, I saw a great many interesting vehicles during my visit.  This brightly colored Vespa was just too cute.

Have you ever been to Linz?