It’s been two weeks since we buried my Dad.

He passed away on Sunday, May 26th. It wasn’t a surprise to any of us- he had been sick for a long time, and his health declined noticeably over the last few years. At the end, he relied on a caretaker twenty-four hours a day- an aide cooked for him, fed him, dressed him. For the last ten months or so, he was bed-ridden, and for longer than that he was almost entirely non-verbal.

That’s not who he was, though. My father was a loud, friendly person who would strike up conversations with just about anyone.  He was a pharmacist for decades, and he had a knack for learning about his customers. This habit led to one of Dad’s customers becoming our family’s go-to automotive mechanic for years. On another occasion, Dad set me up on a totally awful blind date with one of them.  We had nothing at all in common, but it was a perfect example of my father trying to do things to make his children happy.

My brothers and sister and I each said a few words at the funeral. I didn’t want to at first- in fact, only my oldest brother was going to speak initially. We all talked about it the night before the funeral though, and it became apparent very quickly that we all had very different perspectives about him. My sister is nine and a half years older than me, and my brothers are five and six years older, so we each had a very different relationship with Dad.  When we realized how different each of our remarks would be, we decided that it would be good for each of us to say something.

Speaking at the funeral was one of the most difficult things I’ve ever done.  When I stepped up to the podium, I actually couldn’t speak for a moment.  I was worried that I wouldn’t be able to speak at all.  When I finally started,  I had to force myself to slow down.  Staring down at the paper the entire time, this is more or less what I said:

My father was always larger than life, and growing up I thought he would live forever. When I was a kid, dad was a mythic giant. I used to call him The Ogre, after a stand-up comedy bit that I liked. He didn’t much care for the nickname, because he thought it was a mean sounding word, but I meant it fondly. He was my giant.

Dad was the guy who would surprise me with a trip to Disney, just the two of us. He took me to my first concert, the first of many, even though he didn’t really like the music. He would watch movies with me, and then he would annoy me endlessly by loudly and correctly guessing the second half of the plot halfway through the film.

He taught me all sorts of things about being a man. He had opinions about everything from my schoolwork to the checklist of things you wash when you take a shower to the sorts of things a man should wear. When it was time for me to buy a real suit, he went with me to the store and explained what to look for. He helped me to pick out the suit – this suit that I’m wearing now – but then he also made me get a sport coat for some reason.

When I had the chance to go live abroad for a while, his health had already started to turn and I told him that I was worried that I would miss important dad-time if I went. He told me to go, and that I shouldn’t miss a great opportunity just because of him.

When I was a kid, I thought he would live forever. And as I look at all the people who have gathered here to see him off, and I think about the lessons he taught us, I realize now that in some ways, he will.

For a very long time, I thought I knew almost everything there was to know about my father, but I learned things about him all the way up to the very end that I didn’t know.  I learned less than a year ago that his sister called him “Hal” when they were kids.  I learned from his childhood friend at the funeral that he grew up in an apartment above a candy store.  (That totally explains the sweet tooth that I inherited from him.)

Not every memory is a pure and happy one, of course.   My parents divorced when I was in high school, and there was a bit in the middle of my childhood where he wasn’t around very much. He tried to make up for it though, and he did his best to spend time with me.  We took quite a few trips together, including one summer in high school when Dad loaded my brothers and me into his Honda and we drove up to Washington DC and upstate New York and New York City.  We walked through Central Park more than once because we were a little bit lost, but it was still fun.

It became apparent to me as I got older that he would do anything for his children.  I can think of countless times that he went out of his way to make sure that we were healthy or happy or successful.   On balance, he was a pretty great Dad, and I feel fortunate that I had him for as long as I did.

I’m going to miss him.

Hey, remember this photograph from a few posts back? 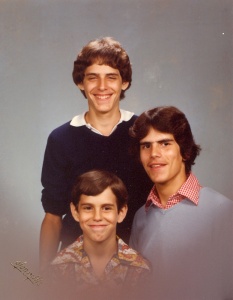 That shot was missing our sister, Michelle.  My siblings and I have always been pretty close, though.  We try to get together whenever we can, and there’s usually someone around with a camera.  Here’s one from the early 1990s.

Today is my elder brother’s 50th birthday. (I call Scott the elder brother because he’s about a year and a half older than Jon.  I’m the youngest.)  That means that 50% of us are older than 50 now.    Time goes waaaaay too fast.   Here’s a much more recent picture, taken at a Tijuana Flats a couple of months ago. 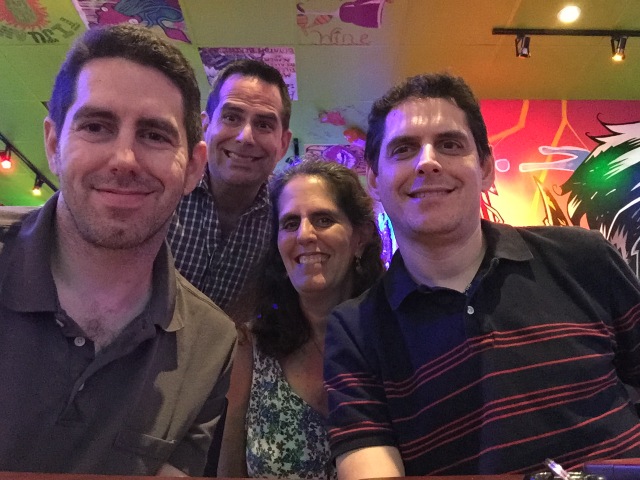 It’s more difficult than ever to get together regularly-  Michelle moved to Orlando last year, Scott has a hectic business and a nearly-six-year-old vying for his limited time, and Jonathan also splits his time between his job, his business, and semi-frequent trips to Orlando.

As busy as I am, I often wonder how the other three manage to get everything done without losing their minds.  Some of the pictures I took of Scott yesterday at his birthday lunch suggest that we might not all be escaping without losing our minds after all.

Still, I know many people who aren’t so close to their family members.  Lots of people have bad history or conflict with their siblings, and it’s unusual for a large family to get along as well as we usually do.  I’m not saying we don’t have our problems from time to time, but we do enjoy each other’s company, and that’s a really nice thing.

Are you close to your own siblings?

I was searching my computer for a specific photo because I thought a story about that photo would make a good blog post.  I couldn’t find the photo that I was looking for, but I did find this one, and it’s amazing.

Yesiree bob, what we have here is a vintage Olan Mills studio shot of the Glassman Boys.  My older brothers Scott and Jonathan, and me in the most ridiculous shirt the 1970s could possibly throw up around my neck.  There’s another one with the three of us and our parents, but not my sister-  I assume this is when Michelle was off at college.

Here’s the thing about this photo that is the most interesting to me:  I don’t remember it.  I don’t even remember going to this photo session a little tiny bit.     I didn’t even know I had this file on my computer until just a few minutes before I started writing this post.

I know that I was about ten years old here, because I was wearing the same horrible Art Deco shirt in my 1982 elementary school class photo.  (Seriously, it looks like Andy Warhol and Piet Mondrian got drunk together and threw up on a canvas!)

I do remember another studio photograph that was taken with my siblings, including my sister-  that one is indelibly burned into my brain for two reasons-  the first is that I actually had a copy of that one all these years, whereas the sibling picture up above is actually new to me.  The second reason the other one is far more memorable is that my sister drove us to and from the studio, and on the way home a neighborhood girl chased a ball into the street in front of our car.  The girl survived, but I remember her having a nearly full body cast for a while after.  Michelle was traumatized, naturally, because running over a person is scary and stressful. (Or so I imagine.)

My memory of the times before high school is fragmented at best.  I’m not really sure why that is.  Some people have really detailed memories of their childhood, but the only things I remember clearly tend to have to do with times that I was either very embarrassed, very angry, or with very dear friends.    Memory is weird that way.

Speaking of memory, I have no idea what my original idea was for the primary thread of this post, so I’ll wrap up with another childhood memory.  This one is more funny than traumatic.

In the late 1970s, my brothers had a giant Habitrail with a bunch of gerbils in it.  For the uninitiated, Habitrail is this system of tubes and spires that allows you to take any standard sized fish tank and make it a playground kingdom for gerbils.    It’s changed over the years, but do a Google Image search and you can get a basic idea of what a Habitrail looks like.

I don’t remember what all of the Gerbil’s names were, but I know that one of them was named Chip.  I know this, because at a few minutes before 8pm one night, one brother says to the other, “Let’s go watch CHiPs.”  The Larry Wilcox/Erik Estrada show premiered when I was about five years old, and I didn’t watch nearly as much television back then.  For one thing, there were only about a dozen channels between the VHF and UHF dials, and we didn’t have cable television yet because it was still the 1970s.

“Let’s go watch CHiPs,” said my brother, and I pointed to the Habitrail and responded in the only way that made any sense to my tiny brain at the time:

“But why are you going in there?  Chip’s right here!”

What’s the earliest thing you remember?