For most of my life, I lived in Florida. Sure, I was born in New Jersey, but my family moved South when I was roughly six weeks old. Aside from a few years in Germany and my more recent translocation to Virginia, all the rest of my days were lived in Florida.

It’s for this reason that my brain is broken in a really peculiar way. The only time I’ve ever lived in a place with actual winter, the metric system was in play. The result? I don’t really understand cold temperatures in Fahrenheit. When the temperature drops below 60 degrees Fahrenheit, my brain short circuits and I have no frame of reference for what that feels like.

Unless you tell me it’s 16 degrees Celsius. Then I understand it completely.

Warm temperatures I completely get in Fahrenheit, but cold temps I only grok in Celsius. I have no idea how to dress for 32F, but I’m ready to go when it’s 0C outside. Intellectually I know it’s the exact same thing, but… my brain still doesn’t make that association.

Twelve degrees celcius on a sunny day is a gorgeous, perfect day in my brain, but if you tell me that it’s also 53F, I’m bound to think it’s colder than it really is.

As you might imagine, I spend a lot of time flipping the weather app on my phone between Fahrenheit and Celsius whenever I leave the apartment. I’m trying to forge new associations in my brain about what each of those numbers actually feels like. I think that in time, I can rehabilitate my brain to properly understand cold weather in Fahrenheit.

One of the things that has taken some getting used to while living in Germany has been the adjustment of various types of measurements.

Twenty-four hour time is more common here than AM and PM.  Soon after my arrival,  I bought an alarm clock without realizing that the alarm clock is permanently, immutably set to twenty-four hour time.  I still have a panicked moment every time the clock reads 0:01 where I think there might be a bomb counting down.

I still haven’t got the hang of weights and distances.  Air Berlin’s website refers to their baggage allowances in kilograms, instead of pounds.   I learned the metric system in school, but I never really had to use it until I got here.  Distance is meters and kilometers instead of feet, yards, miles.   My furniture is all measured in centimeters!

One of the things that I brought with me was my grandfather’s old fifty foot measuring tape.  I was saddened to realize that it’s useless to me here because it’s was all in inches and feet and has no centimeters or meters.  I sent it to my brother for safe-keeping and put a measuring tape on my shopping list.

For the last week or so, the temperatures have remained below freezing.  For this life-long Florida resident, this is a very new experience.  I now know that these two temperatures are identical:

I’ve had to mentally map certain temperatures to one another.  For example, 32F=0C.  That one’s easy to remember, since it’s the freezing point of water.  Below 0C means snow instead of rain.  Or sometimes if it’s really close to 0, rainflakes-  snow that becomes water as soon as it touches the ground.  -11C and 11F are also a nearly identical temperature.

When I started to write this post, it wasn’t intended to be about measurements or weights or distances, it was about what happens when the temperature drops below freezing for a sustained amount of time.   This stuff gets everywhere: 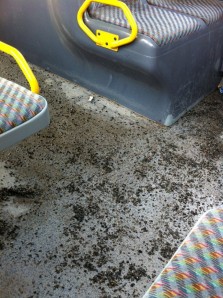 That schmutz you see on the floor of the bus?  It’s s a combination of streusand, streusalz, and mud.  Streusalz is the salt they put down on the roads and sidewalks to keep the snow down on major pathways, and streusand is a sort of gritty gravel that they put down to lend more texture to snow and ice so that you have more grip.

So now people walk around in the snow and salt and grit, and it tracks everywhere.  Spend five minutes on the bus and all the snow on your shoes will melt down into this gritty nasty mud that you see in the photograph.  The gravel is all over the carpet under my desk at work.  It’s also tracked into my front hall at home.   The floors of the train station are horribly nasty right now.  All of my shoes have little tiny stones in their tread.

Honestly, I’m looking forward to warmer weather just so I can keep my floors clean.