My first few days here have been a rush of Getting Stuff Done, coupled with occasionally sleeping.  I posted before that I got in on Saturday, but what you can’t tell from the post is that shortly after I wrote that entry, I passed out and slept for more than twelve hours. 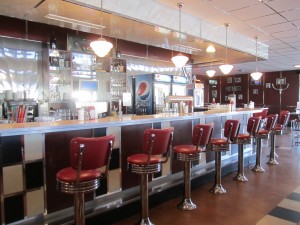 When I woke up, it was Sunday and I had time to explore the city a bit.  I first walked over to Sam Kullman’s Diner which is an American style of diner, all neon and chrome.  The website shows a location that’s even physically styled like an American diner, but the Regensburg location isn’t quite as obvious. If I hadn’t been on foot, I might not have spotted it at all, even though I was actively looking for it.

Still, the food was a nice breakfasty start to my Sunday.  From there I walked through the old city a little bit. 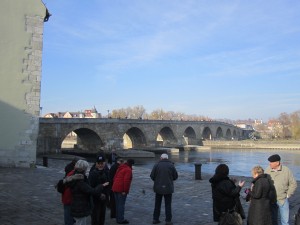 Regensberg has a lot of tourism, as it turns out.  First of all, there’s a lot of very, very, VERY old architecture here.  There’s an Old Stone Bridge that was built by the Romans, and which still gets foot traffic.  There’s a lot of industry here-  there’s a BMW factory nearby (that’s Bavarian Motor Works… I forgot entirely that BMW is a Bavarian brand until I got here.)  Siemens has a major presence here.  There’s a massive company called Krones which I had never heard of until this week, but they make parts for other factories, and they have a huge employmee base here.  There’s also a university which is the bane of my existence while apartment hunting- it turns out that they had a higher number of students than ever this year because of a recent change to their enrollment rules, so a lot of the good apartments have been scooped up by students in the weeks and months just before I got here. 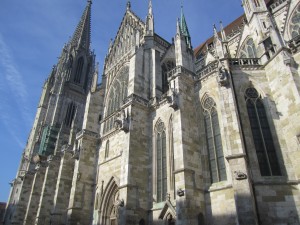 I digress, however- I was talking about Sunday and my walk through the touristy bits.  The Old Stone Bridge, and the really impressive Cathedral in the old city are both really impressive to see.  I also went to a historical museum, the Museen der Stadt Regensburg,” which had artifacts from the middle ages- architecture, stained glass, stonework, paintings.  I walked into the museum originally because I was still a fair distance from the hotel and I really had to use a restroom, but I’m glad I stayed and walked through the museum after.  I’ll have to go back some time in the future when I understand enough German to read the labels on everything.

Speaking of the loo, one of the random differences that I love about this place is that restrooms are often marked as WC, which as fans of any BBC Brit-com will know, is short for “Water Closet.” 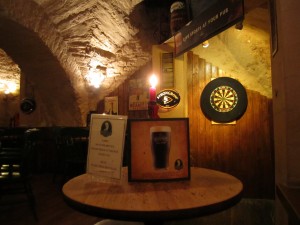 The latter part of Sunday, I walked further into the old city to visit an Irish pub called Murphy’s Law.  A Strongbow and a shepherd’s pie made a perfect dinner for my first full day in my new city.  I’m fond of telling people that the best meal I had during the entirety of a two week trip to Hong Kong in 2008 was at an Irish pub.  What can I say? I like Irish food.  And drink.

Due to a flaky hotel WiFi connection, this took much, much longer than I had intended to write up, so I’ll stop here.