This is up in the upper levels of the Regensburg Arcade, which is basically a shopping mall: 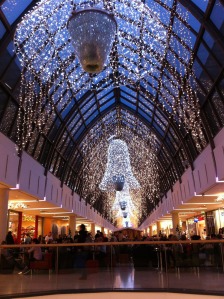 The outside of the building is draped with the dangling blue-white strings of lights also.  I have no idea if this is a year round decoration, or if this is a holiday thing, but it looks beautiful.  I doubt most of the people who go to the Arcade even bother to look up, but the decorations are quite lovely..

As I walk around Regensburg, its hard to miss that all the Christkindlmarkt, or Christmas Markets, have opened up.  We walked past a rather large one in the old city the other night on the way to other food and drink establishments.  There were large crowds, a carousel, and a whole lot of tents.

Last night, I went with some people from my office to a Christkindlmarkt that was held at an actual castle, Thurn and Taxis.   A castle!  There are quite a lot of castles in Germany, including the one that the traditional Disney castle was based on, from what I’ve been told.

At the Christkindlmarkt, I had a chance to try Glühwein, a hot mulled wine.  I had been warned about its potency and it’s deliciousness in advance, so I deliberately went slowly.  Still, there were many different varieties and flavors, and when it’s that cold outside, a hot mulled beverage is very easy to consume rapidly.  I stuck with the apfel (apple) flavored variety, but I may need to go back to try the blueberry sometime soon.

After the hangover from the first round is done, that is.   (Kidding!)