I’ve always wanted to see Europe.  Lots and lots of Europe.  Up until I moved to Germany, however, I had never actually been to Europe. When I was given the chance to work in Germany for Mr. Company, one of the biggest draws was that I would be here for a long period of time-  exploring Europe from Europe is a great deal simpler than trying to do it in a series of shorter trips from the US.

To add to my wonderment,  Regensburg sits on a major rail line.  The Regensburg Bahnhof is a five minute walk from my apartment.  From there, I can be to Munich in just under 90 minutes.  In five hours I can be to Vienna, Salzburg, or Prague.  In less than seven hours, I can reach Berlin or Zurich.  In eight hours, I can reach Amsterdam, Budapest, or Paris.  If I have ten or twelve hours, I can reach Venice, Rome, or London.  That’s just rail-  if I take a 75 minute train to Munich, I can hop a flight to just about anywhere in no time at all. 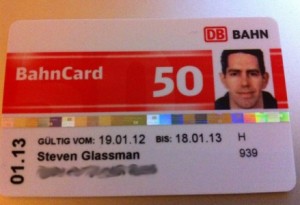 I just got my BahnCard, too.  The BahnCard system is a wonderful boost to someone like me.  For a yearly fee up front, you get a percentage of all of your rail travel discounted within Germany.  The BahnCard 25 is less than sixty Euros up front, and is 25% off your rail for that year.  The BahnCard 50, which I purchased, is 240 Euros per year, but it provides a 50% discount.   I’ve already made back 20% of the expense, and I just got the card last week.   There’s also a BahnCard 100, which is an obscene amount of money up front, but BC100 holders do not pay anything additional for their German rail travel for that year.  It’s the Black Card of the EuroRail system, literally- it’s actually a black card.  Regular BahnCards arrive in a flat white envelope, but the BC100 arrives in a presentation box, pictured below. (And shamelessly stolen from http://blog.mahrko.de/.) 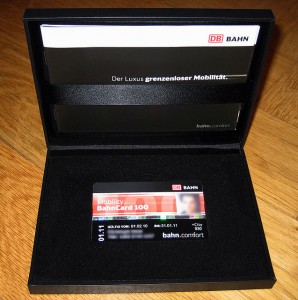 To add to the seven layer burrito of awesome that is the BahnCard, RailPlus is automatically granted on every BahnCard, which grants 25% off of ticket prices for another 24 countries.  From here, I can start planning on little rail trip weekends whenever I feel like it.

9 thoughts on “Two If By Train”