I’ve put up external pictures of the Dom before.  Here’s one to remind you before I continue with the post.

The Dom, sometimes known as the Regensburger Dom or the Cathedral of St. Peter, is well known as an example of pure German gothic architecture.  It was completed in 1634 except for the towers, which were finished in 1869.   The Dom is so integral to the identity of Regensburg that pretty much all of the touristy stuff (postcards and so forth) show the cathedral spires along with the Stone Bridge.  This town loves the Dom so much that they even made a chocolate version:

In addition, the Dom is the home of the Regensburger Domspatzen, literally “Cathedral Sparrows.”  The Domspatzen is the oldest boy’s choir in the world, founded in 976.  It’s also a boarding school for young boys.  The Domspatzen is quite famous, and has performed for Queen Elizabeth II and Pope John Paul II.  (Both of those events were in the 1980s though, so it’s obviously not the same kids.)   Here’s a sample performance-

I digress wildly.   The original point I intended for this post is that I finally had a chance a few weekends back to go inside the Dom and look around.  The interior contains a lot of interesting sculpture, an small catacomb, and a pretty huge pipe organ.  It was also considerably colder than the temperature outside-  I’ve been told that it’s always that cold inside the church.   Here are some pictures from that day: 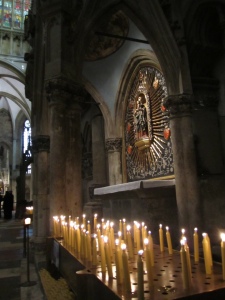 One thought on “Under The Dom”