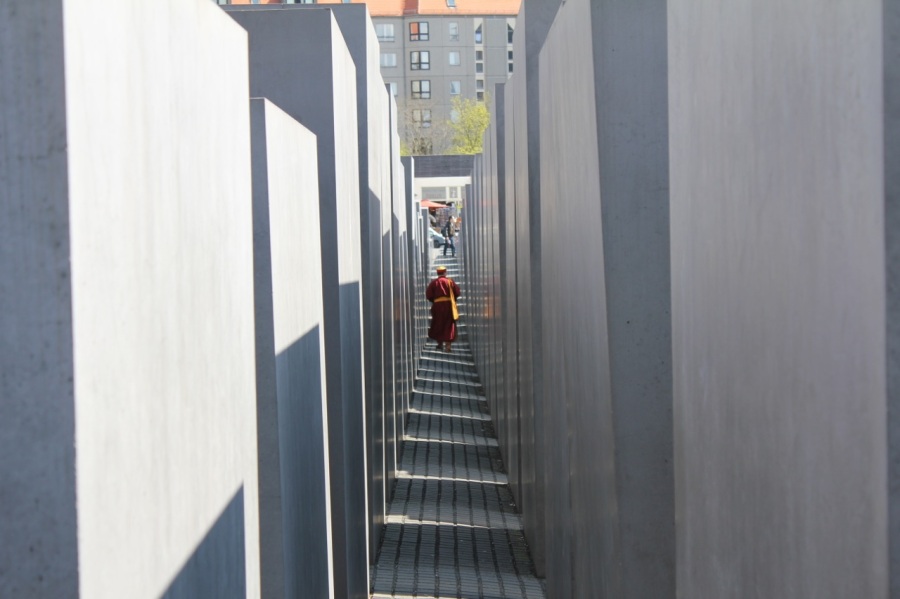 Last weekend I took a short trip up to Berlin.  I had the chance to visit a new city and an old friend at the same time, and I couldn’t pass that up.  I’ve known Heather since high school, and she and her husband Mike were in town for a few days, so off to Berlin I went!

I left after work on Friday, and got in late that night.  I took a room at the same hotel that Heather and Mike were using, the Casa Camper.  It was a smidge pricier than I would have chosen if left to my own devices, but the hotel was awesome.  It has very large rooms, which is unusual for any hotel I’ve been to in Europe thus far.  It also has pretty spectacular amenities, including all-included food in a 24 hour snack bar sort of place, and a good sauna at the bottom level of the hotel.  I actually did try the sauna for fifteen or twenty minutes, but that’s an entirely different post.

The bed seemed like an American queen sized bed to me, not a typical German bed size.  I wouldn’t swear to the measurements though, I just know it seemed like a pretty big bed.   The room also had air conditioning, which is something else I haven’t seen much of since I got to Europe.  I haven’t slept in air conditioning in more than five months, and I had to turn the AC off to really get comfortable.  It’s amazing how quickly no AC has become my new normal.

Needless to say, I slept very well in that big fluffy bed, and Saturday morning after breakfast, we ventured out into the city to do touristy things.  First stop: The Brandenburg Gate!  Except we ran across a small children’s festival on the way to the Gate, and there were oddities aplenty.  For example, there was a parkour demonstration: 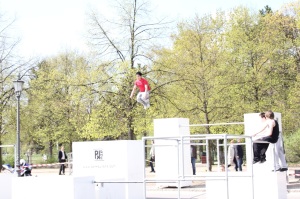 We also saw four guys carrying a piano down the street and the world’s shortest rollercoaster.  It’s that kind of town.   We also saw a Segway tour, and I can never resist taking pictures of a Segway tour. 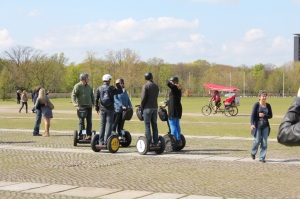 After some walking past the Reichstag and some other stuff, we found ourselves at the Brandenburger Tor!

Once again, I’m amazed to discover that a major piece of German architecture is based on Greece.  In this case, the design is that of the  Propylaea, the gateway to the Acropolis in Athens, Greece.  If this keeps up, I won’t need to ever visit Greece because I’ll have seen all the things based on the architecture there in other cities.

After we were done at the Gate, we wandered over to the Memorial to the Murdered Jews of Europe, a Holocaust memorial consisting of 2,711 “stelae,” slabs of concrete of various heights arranged in a grid over sloping ground covering 19,000 square metres (4.7 acres).  There was also an information center beneath the structure, which holds the names of all known Jewish Holocaust victims, obtained from the Israeli museum Yad Vashem.

I didn’t know much about this place until we got there, but according to the designing architect,  “the stelae are designed to produce an uneasy, confusing atmosphere, and the whole sculpture aims to represent a supposedly ordered system that has lost touch with human reason.”  I can agree that the place is confusing, but it was also peaceful in a way.  Here’s four pictures from there, including one I quite like of a Tibetan monk walking between the stelae. 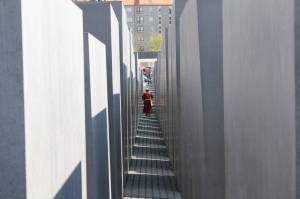 The city of Berlin knows that when you’ve spent some time in a solemn place, the best thing is to cleanse the palate with something patently ridiculous…. like fourteen guys dressed in banana costumes riding a mobile bar that is powered by the pedals at their feet while a fifteenth guy in the center servers them beer.

It turns out the “Bier-Bike” is a pretty common thing for stag parties, and I’ve seen it several times since, including one here in Regensburg where all the participants were wearing standard Lederhosen.  This was my first sighting though, and it was kind of magnificent.

Next stop:  The Berliner Dom, a big ol’ church.  Big pipe organ, big catacombs, and so forth.  Plus a rather distinct dome in this Dom.   Here’s a few pics from the Dom. 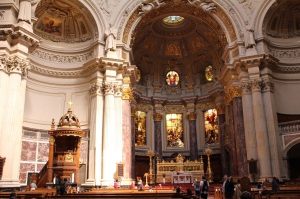 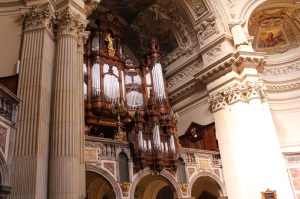 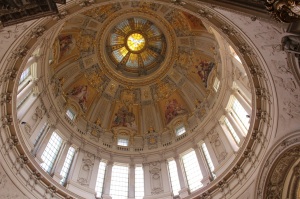 No first trip to Berlin would be complete without a look at some of the historical stuff surrounding the Berlin Wall.  In one area, there is a representation of where the wall actually stood, along with representations of tunnels, and a stunning amount of information about how people snuck past the border at times.  Here’s the representation of the actual physical location of the wall:

Here’s a physical representation of one of the guard towers.

…and, for good measure, an actual section of the original Berlin Wall, moved to another location by the Nestle corporation for posterity:

We also visited the “House am Checkpoint Charlie,” a museum that has a lot of information about how people crossed the border.  There were ultralights, hot air balloons, a personal submarine-  people crossed inside of gas tanks and welding machines and in one case, inside the passenger seat of a car.  The ingenuity was incredibly impressive.  Plus, you know, the actual checkpoint was represented here:

Last but not least, is a very important cultural museum that we spotted on the way to our dinner.  The Currywurst Museum.

As you can imagine, these eighteen pictures are not a good representation of the entire day- there are 111 photos from Berlin all visible in my Berlin flickr gallery: