Before last month, whenever anyone mentioned Barcelona to me, this is what came to mind:

Last month, a long-time friend of mine and her husband were visiting Barcelona for a family birthday event last month.  I love exploring new cities, but I always have more fun if I’m doing so with another person, so this was a great chance for me to see Barcelona while catching up with Christina.   On the Tuesday of that week, headed over to the Munich Airport.  From there, Lufthansa took me to Barcelona for a very reasonable fee. The flight time from Munich to Barcelona?  About 90 minutes.  Easy peasy.

Getting around in Barcelona is also pretty great.  The Aerobus takes you from the airport to the city center.  It runs every five minutes during most of the day.  Once you’re in the city itself, the taxicabs are very affordable, and there’s an extensive underground Subway system.  A four-day/unlimited rides pass was just over 20 Euros.  You can also rent bikes, if that’s your thing.  I got around for the entire trip using just public transportation and two or three cab rides.

A quick note about technology:  Whenever I leave the borders of Germany, I lose the ability to use my phone for mapping and location stuff-  roaming data is absurdly expensive, so I just turn it all off.  On this trip, I managed to get around for the entire stay using just two apps regularly.

The first app is a simple Metro app that uses your GPS to figure out the nearest train station, and it plots a route  using the subway.  The second app was the TripAdvisor app.  This one has a huge list of attractions, hotels, and restaurants, and it uses the GPS to locate you on a pre-loaded map- no roaming data required. It also combines the GPS with the phone’s compass to make a really nifty “Point Me There” feature.  Without this feature, I would never have found my hotel, and I would have gotten lost over and over and over again.

I won’t bore my six and a half readers with the day by day travelogue styled post that I originally wanted to write.  Instead, I’ll give you the highlights.

Antoni Gaudí was an architect and certified crazy genius who was responsible for a slew of Barcelona’s most famous sites.  I’m going to nutshell them here, because I could easily write pages and pages and pages about these structures.

La Sagrada Familia – This enormous church has been under nearly continuous construction since 1882, and it’s expected to be finished sometime around 2028 using Gaudí’s original plans.  One side very ornately shows the Nativity and the life of Christ. I’m standing in front of that side of the building in the picture below.  The other side is more austere and it shows the Passion, the death of Christ.  The columns inside were designed to resemble trees and branches. 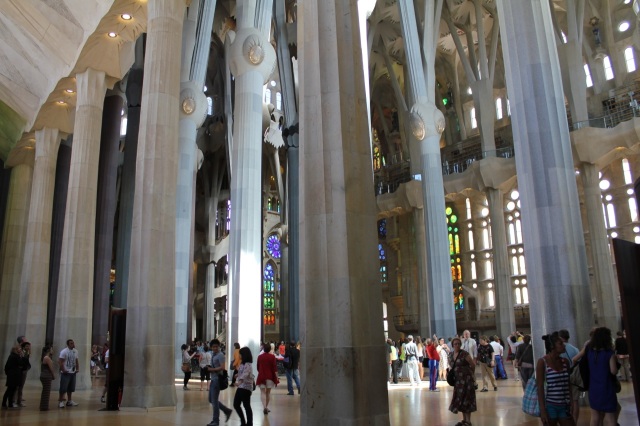 Parc Güell – This is what happens when you set Antoni Gaudí loose on a park and garden complex.  I only saw a fraction of this park, because it’s enormously huge and I was on foot and kind of turned around. 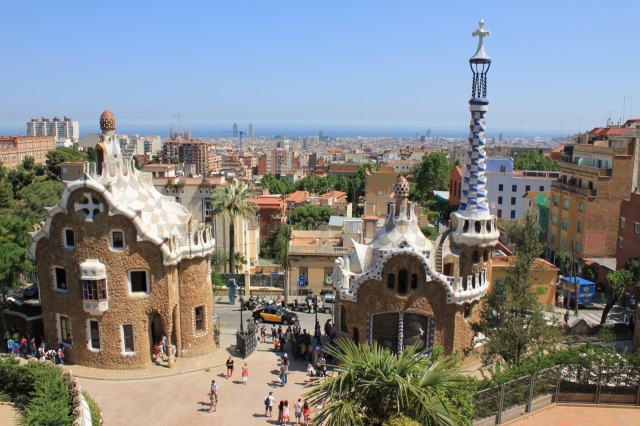 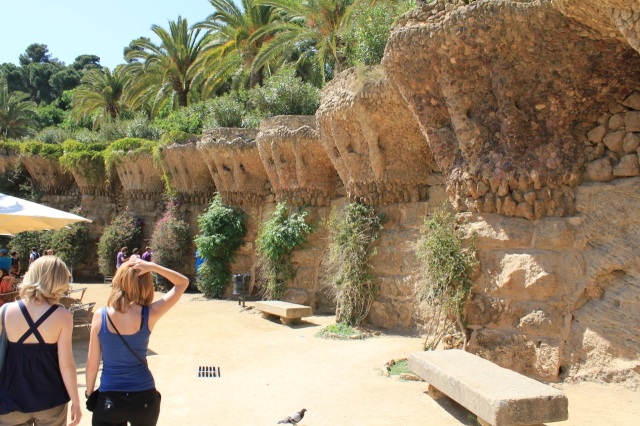 La Padrera – An apartment building designed by Gaudí, this is now part museum and part office space.  You can go up on the roof, tour the attic, and even visit a sample apartment.

Casa Batlló – This building has a skeletal, fish-scale appearance.  This was originally designed as housing for rich Barcelona folk.

Not Gaudí, But Still Impressive And/Or Interesting. 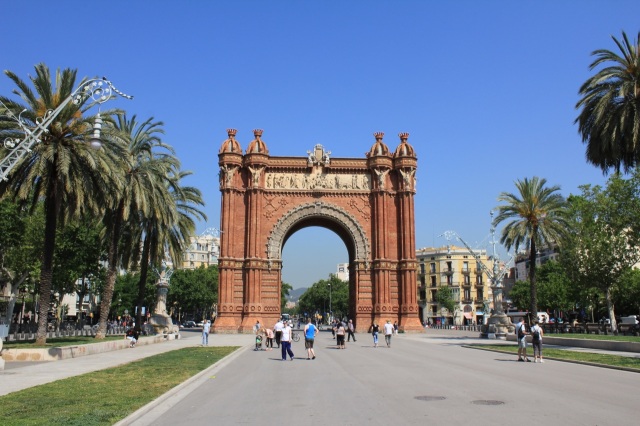 Placa Espanya – Placa Espanya holds several very impressive structures.  First of all, this is where the Font Màgica (Magic Fountain) is located.  Thursday through Sunday nights, after about 9pm, there’s a water show set to music.  If you’ve ever seen dancing fountains at Disney or the Bellagio, then this is nothing new to you, but it’s still fun to watch.  Also in the Placa Espanya are Venetian Towers, a scale replica of the originals from Venice which were a gift to Barcelona for the 1929 Universal Exposition. 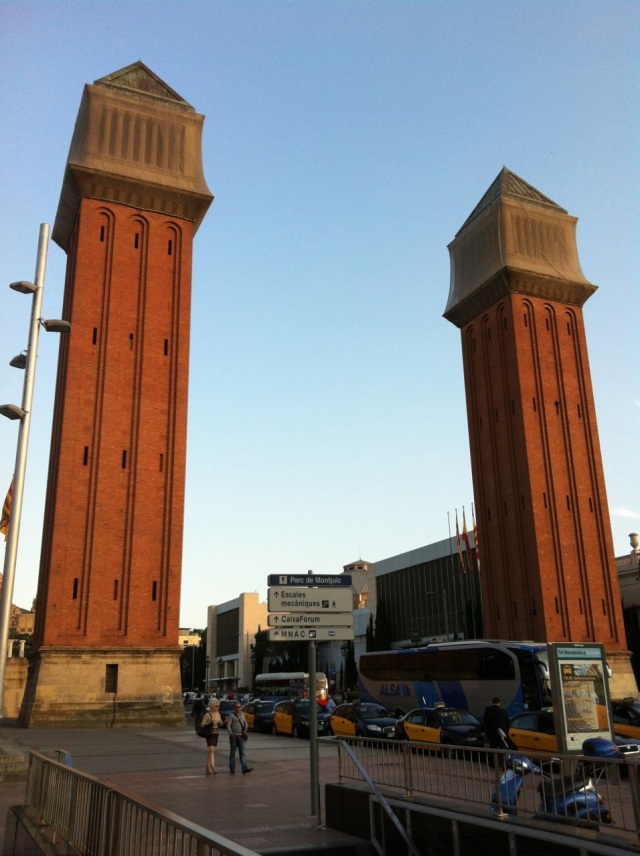 Palau de la Música Catalana (Palace of Catalan Music) – Often referred to by travel writers as the most beautiful concert hall in the world, this amazing space seats about 2200 people, and during the day it’s illuminated entirely by natural light.  The sculptures behind the main stage are the figures of 18 muses. Their lower bodies are depicted in mosaic, and their upper bodies protrude from the wall. Each muse is playing a different musical instrument.  If you take the tour, you get a lot of background about the decorations, the lighting, and the acoustics, as well as a demonstration of the pipe organ. 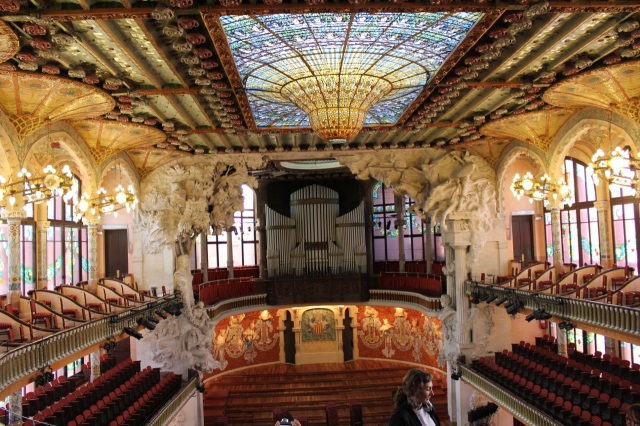 Flamenco – While flamenco didn’t actually originate in Barcelona, it’s still a long-running tradition;  there are several Flamenco shows in Barcelona.  We went to a dinner and show off Las Ramblas at an establishment which has been there since 1970.  Dinner was at 10:00 PM and the show began at 11:30 PM, so it was a pretty late night.  They have earlier shows, though.   The food was spectacular, and the show was amazing.

There was a lot more.  There is so much more to do  than what I’ve shown here. I was there for four days and took over 600 photographs.  Many of those photographs are visible in my Barcelona Flickr gallery, including many more detailed pictures of La Sagrada Familia and everyplace else I went in the city.

If you do visit Barcelona, you should try the tapas.  The food was excellent almost everywhere I went.  I particularly enjoyed my meal at Cafe del la Princesa in the old gothic quarter (Barri Gotic) near El Born.

I’ll close out this post with a few more photographs of things that I thought were interesting.

During our visit, we took a guided tour of the city, and it was pointed out that people who are frustrated with the Euro-zone financial crisis have “redecorated” the facade of the city’s main stock exchange.

Wandering around the city, playful children and live street music were everywhere.  In that order:

And lastly, the Barcelona airport has a rather interesting feature-  from the gate, inside security, you can walk out onto a sun deck and get some ice cream while waiting for your flight.  This is brilliant.