I am often amazed at the ways in which common pop culture differs between countries.  Before my arrival here, I had never heard of Winnetou.  I also learned recently of  “Dinner For One”, sometimes known in German as “Der 90. Geburtstag.”

The piece was written for the theatre in the 1920s, and was recorded by a German television station in a single take in 1963 with British comedians Freddie Frinton and May Warden in the starring roles.  The piece was recorded in English, with a short German introduction.

Here’s where it gets weird. 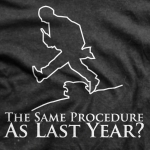 Since 1972, “Dinner For One” has been a regular part of the broadcast schedule of German, Danish, and Swedish television stations around Christmas and New Year’s Eve.  Some stations play it repeatedly, the same way that American stations play A Christmas Story over and over each year.    “Dinner For One” is well known in other countries as well, and has become a regular part of the pop culture of Europe.    The program’s catchphrase, “Same procedure as every year, James,” has become the in-joke of an entire nation.  It has even made it onto t-shirts, as seen to the right.

The skit has been repeated on air so often that it actually won the Guinness World Record for most repeated television program.

Except in North America, where it has never been aired.

We’ve never heard of it.

I aim to change that.  Here’s an English language recording of “Dinner For One.”  It’s not the full 18 minute original version, but you’ll get the idea.

3 thoughts on “The Same Procedure As Every Year, James.”