I went to Erfurt two weeks ago for a concert.  I headed over on a Friday night  I wasn’t really sure what to expect because I’ve never heard much about Erfurt, except for a comment from Cliff of Regensblog who said that Erfurt was quite nice.

I will  agree, I found Erfurt to be absolutely charming.  Here’s the view from my hotel room when I first got into town:

There’s a lot about Erfurt that I did not know, however.  For example, the Erfurt Synagogue, which I did not see, was built around 1100, and it’s thought to be the oldest synagogue still standing in Europe.

I also did not know that Kika, the children’s television programming network, wsa based in Erfurt.  That explains this giant statue of Bernd das Brot in front of the town hall.  This statue was kidnapped in 2007- I didn’t know that until just a minute ago but it’s a fascinating and entertaining story.  Even if Bernd das Brot does creep me out.

I also found a random gnome on a bench, and couldn’t resist.

I wandered by the Krämerbrücke, a rather unique footbridge over the Breitstrom, a small tributary of the Gera river.  This bridge has buildings on both sides, so it doesn’t actually look like a bridge from inside it.  In hindsight, I wish I’d tried to take this piture in HDR so the tower in the background wasn’t so washed out.

I also wanted to check out Erfurt’s Domplatz, and I found it easily by following the sounds of a brass band.  Here’s how it looked at 9am.  You can see

…and here’s what it looked like less than a half hour later.  The brass band I heard was just warming up for a giant gathering called Bistumswallfahrt 2012. 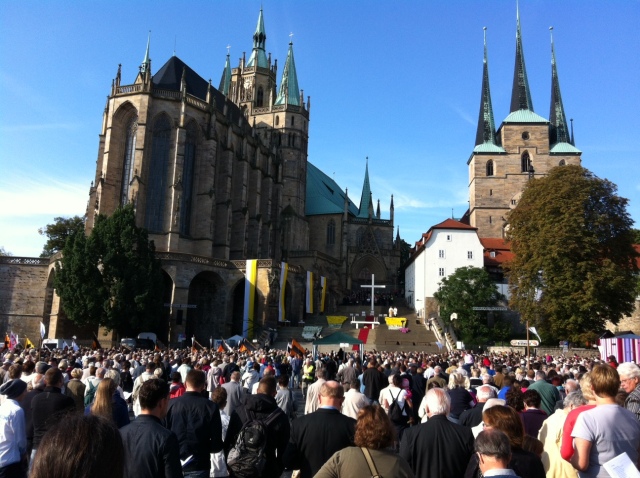 This was a religions event held  on the Domstufen, the huge steps between the Mariendom on the left and the Severikirche on the right.  There was a procession with a bunch of flags and children in white robes.  I don’t really know specifically what they were celebrating, but the band was joined by a large chorus as well.

I watched the whole thing for perhaps forty minutes, and then I walked back to the Bahnhof to catch my train back to Regensburg.