Before I got to Germany, I had never heard of CEFR, the Common European Framework of Reference for Languages. This is partly because it’s a European framework, and North America has a different set of standards. Mostly, though, I hadn’t really spent much time thinking about how people learn languages before I got here. Once I arrived in Germany, however, I had to make a decision about how much time and energy to commit to picking up German.

It may surprise many people to learn that I could live here for the entire run of my contract without speaking a word of the local language. Some people do. Regensburg has a large university as well as a tremendous amount of industry, with international companies like BMW, Continental, GE, and Siemens present. In addition, German children start to learn English in school. When I first arrived here, I started a lot of conversations with, “Do you speak English?” The answer was always the same: “A little.” This, followed by a fluency in English that far surpasses my skill in any other language.

My job interaction is primarily with other members of my department back in the United States, or to people in my local office who are all basically fluent in English. My contract is only for three years, and my residence and work permits do not require any proficiency with the language. And yet…

I know someone who has been here for seven years and is only just now starting to learn German. I don’t want to be that guy. I don’t want to be the stereotypical monolingual American who refuses to adapt and acculturate, so I’ve tried almost from day one to integrate myself as much as possible. This means trying in earnest to learn the language.

When I moved over in 2011, I purchased the Rosetta Stone software. Rosetta Stone is good, to be sure, but it didn’t quite work for me because it doesn’t explain the grammar. German grammar is a horrendously complicated, nightmare inducing crapfest. This is a huge part of why it’s so complicated: 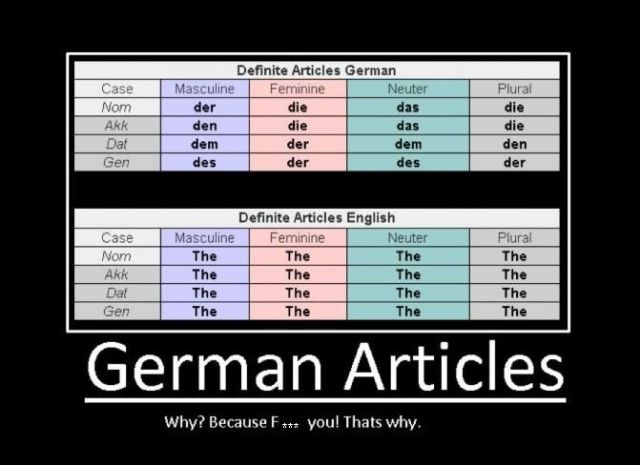 I would absolutely kill on the vocabulary exercises in Rosetta Stone, but every time a grammar exercise came up, I would bomb it utterly. There are interactive parts of the Rosetta Stone program that put you one on one with other people learning the language, and even a small classroom environment where you learn in a small group- the software comes with a basic headset so you can interact in real time with video and audio. I never used those portions of the software though, and my learning curve became a sort of stagnant crazed line.

Last September, I finally gave in and joined a local language course at the Volkshochschule, the German equivalent of a community college. It runs two nights a week for two hours and fifteen minutes each night. The classes are split up into CEFR levels, and so I started with the A1/1 class.

The CEFR levels are set from A to C, with the highest C being a level of mastery that comes close to a native speaker’s proficiency:

A1 Breakthrough or beginner

B1 Threshold or intermediate

B2 Vantage or upper intermediate

The first thing I noticed about the class was that there is no way I could have succeeded if I’d started it when I first arrived. There is no English spoken in these classes, and I found that I needed a base layer of German language skill to even follow the class. However, I’m glad I started going- the class does a few very important things for me that Rosetta Stone never did:

Since September, I’ve done two more classes, all part of the A1 level. My current class goes until late February, and then there’s one more class to cover all of A1. I still speak like a two year old, but I’m getting better. I’m picking up more words when I listen to other conversations or television or radio, and the meaning of things is starting to filter through in tiny pieces.

I’ve decided that I’m going to stop after the last A1 class, at least for now. I’ll have been going to German classes nearly non-stop for seven months, and I’m kind of burnt out on the time expenditure involved- between the classes, the homework, and the travel to and from the class location, this has been burning a lot of time, and I’m really feeling it. I’m confident that I won’t stop learning the language just because I’m stopping the classes, though- the classes have given me a great starting point to keep learning in the real world.

Tell me about your experiences learning a new language. Have you had success with language classes since you arrived?