I travelled into Munich on Saturday afternoon.  Compared to last weekend’s total bust of an Ingolstadt day trip,  this weekend’s trip resulted an absolutely perfect day.  It helps that I had a specific goal in mind.  I had acquired a ticket to see Dinosaurier: Im Reich Der Giganten.  I gave myself a little bit of padding time before and after the show, and that extra time is where the day became really successful.

It also helps that Munich is a vibrant and amazing city, with a lot of really cool stuff going on.  There’s so much cool stuff in Munich that even after repeated trips to the city, I’m still ticking things off my “Ooh, I’ve gotta see that sometime!” list.

I went a little bit early today with the intent of finally getting to see the Ruhmeshalle.  I had already seen Walhalla and the Befreiungshalle  (“Hall of Liberation”).  This is a sort of companion piece to the both of them, since they were all originally commissioned by King Ludwig I of Bavaria.  I did make it to the Ruhmeshalle, but I could’t go inside because it was closed up- probably because most of the stairs were still iced over.  At least I got to see it, along with the statue of Bavaria in front.  I’ll have to go back there some other time, when it’s a little bit less icy.

Because I took a detour to an area of Munich I hadn’t seen on my way to the Ruhmeshalle, I got to see several other interesting things.  First of all, there’s this wacky staircase at the KPMG Building:

Secondly, I got to see a random giant snail.  I have no idea whatsoever what this snail’s deal is, but I assume he’s related to the Deutsches Museum Verkehrszentrum, a part of the Deutsches Museum near Theresienwiese.  It’s a giant glass building filled with trains and planes and automobiles.  And at least one helicopter.    I really need to go back there sometime- I love things that go zoom.  Anyway, here’s the snail.  Doesn’t he look happy?

After my detour into giant snail and unpossible staircase-land, I went on to the dinosaurs that were my reason for going to Munich.  If you go to the Dinosaurier Live site, you can see some cool promotional video of the show.  My seats were way up in “sherpa guides and oxygen tanks” territory, but I still took a few pictures.  Click for bigger. (And a quick side note- remember the brontosaurus?  I miss that big guy.) 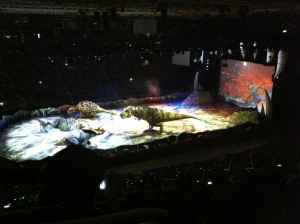 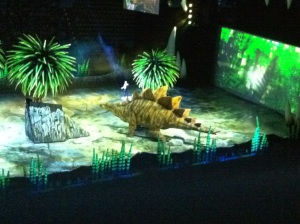 I debated whether or not to include video clips, but the way they animate the dinosaurs is really quite amazing, so here’s two short clips.

By the time I came out of the Olympiahalle, the overcast day had given way to sunny and gorgeous, because springtime is banging at the door here.  My walk back to the U-Bahn took me right past the Olympiaturm, another place on my “I want to go there” list.   Since the skies had cleared up, and I had an hour to the next train back to Regensburg, I decided to hop in for a look-see.   There’s a restaurant up at the top of the Olympiaturm, and I’d like to eat there some time in the future.  I love restaurants in tall places.  (I’ve been to restaurants in the Skylon in Niagara Falls, the CN Tower in Toronto, and a few other super-tall places.  My love of dining in the sky knows no bounds.)  This is the Olympiaturm.

Since the weather had cleared,the views from the top were amazing.  It still wasn’t clear enough for me to see the Zugspitze, but I’m ok with waiting until May to see that for myself.  In this picture, you can see the BMW complex.  You can also see the shadow of the Olympiaturm, which cracks me up.

At the foot of the Olympiaturm, there is a pond.  And in that pond, the forces of Springtime were amassing.  And eating pretzels from all the passersby.  Ever seen a mallard duck trying to chew up a piece of pretzel?  It’s high comedy.   Aside from that, it was really quite lovely, though.  A perfect end to a pretty amazing day.

To top it all off, when my train left Munich, we passed an open field where four small deer were playing in the snow.  Seriously- a perfect day.

Tell me about the last time you had a perfect day.

12 thoughts on “A Perfect Day”