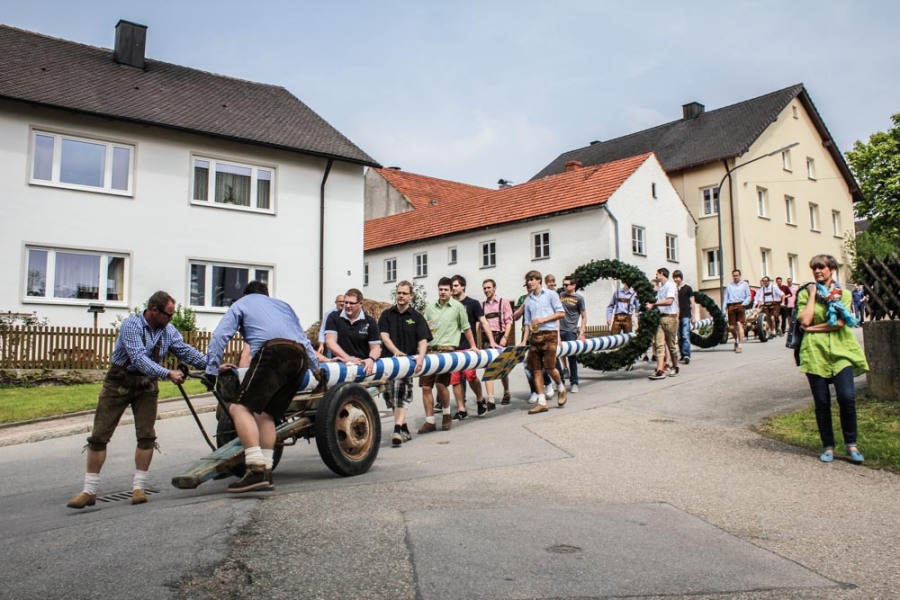 On the first of May last year, I wrote a little bit about May Day, and about Maibäume, or maypoles.  This year, I got to see the raising of a May Pole up close.  My partner-in-crime Jenny and her boyfriend were planning on going to a raising in nearby Peising and invited me along to hang out with the Village People.  (I mean the people who live in the village of Peising, not the band with the cowboy and the construction worker.  I would actually have enjoyed having a beer with them too.)    Since the day is a public holiday in Bavaria (no work!) I had nothing else planned, so I took them up on their offer.  I’m glad I did, because it was actually a lot of fun.

First of all, a May Pole raising is often held with all the elements of a traditional Bavarian beer-fest.  There are beer garden styled tables and benches, lots of people in Tracht (lederhosen and dirndls), and even some live musical entertainment.

This was also kind of a family event, and I have to just say-  kids in Tracht are incredibly damned cute.  These three pictures are proof of that.  Also, the little kid on the scooter is kind of an adorable badass with the sunglasses and the spiky hair.  He was my favorite Bavarian kid all day long. 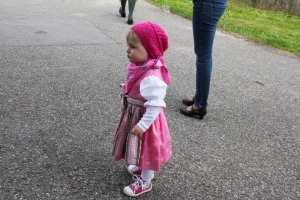 At two in the afternoon, it was time for the Maypole to be raised.  It had been stored a short distance from the place where it was to be raised, and there is a tradition where a group of people from the village guard their Maypole against theft by another village.  This involves drinking lots of beer and hanging out overnight around the pole.  If the people from the other village succeed in stealing the Maypole, it must be “bought” back for the princely sum of 50 Liters of beer and enough Bratwurst for all the members of the raiding party.  At least this is how it was explained to  me.  As you can see, however, it wouldn’t be terribly easy to steal another village’s Maypole:

The process of raising the pole took around 45 minutes, but Robert says it can be done much faster if people really want to.  It starts with everyone lining the pole up with its metal base so that a primary spike can be put through it to anchor it in place.

Next, they use smaller wood poles connected by barbed wire (seen below) to prop the pole up and to lift it in increments.  These tongs are in varying lengths, and the longest are nearly as long as the Maypole is tall.  The group would lever the pole up slightly, then move one or two of the sets of tongs further down the pole, then another lift.  This is repeated until the pole is completely vertical.  These next few photos show what I’m talking about. 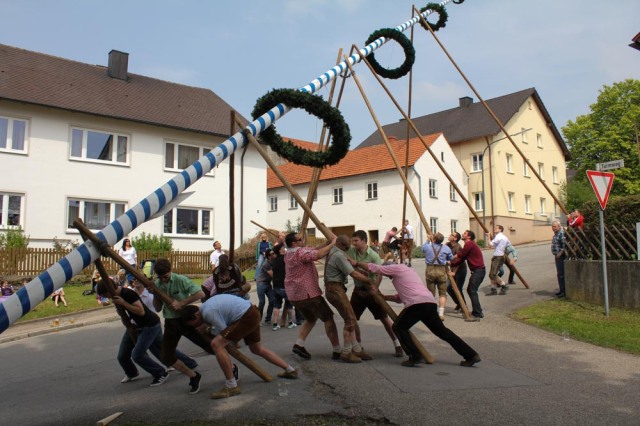 There’s a secondary type of pole, seen here, which is used to help guide the longer sets of tongs when they’re quite a large distance above the ground.  A “spotter” with one of these stands under the far end of the tongs to help steady them while they are being moved further down the Maypole.  This is probably a very good idea, because it’s very easy to lose control of the longest sets of tongs when you’re only gripping it from the furthest end.  As you can see, the tongs get very long.

Once the Maypole is entirely vertical, metal plates are bolted across the open side to keep it from toppling over again.  A few pieces of wood are wedged into place to hold the pole steady.  Finally, a quick bit of spot-welding on the bolts keeps them from coming loose for the next few months.

After all of this, Voila!  A lovely Maypole has been set up in the village of Peising.  The blue and white stripes are traditional; they’re the colors of the Bavarian flag.  Once the Maypole is fully raised, everyone settles back down for beer and bratwurst.  And, in my case, chocolate cake.

Have you ever seen a Maypole raising?

12 thoughts on “Raising A Maypole”