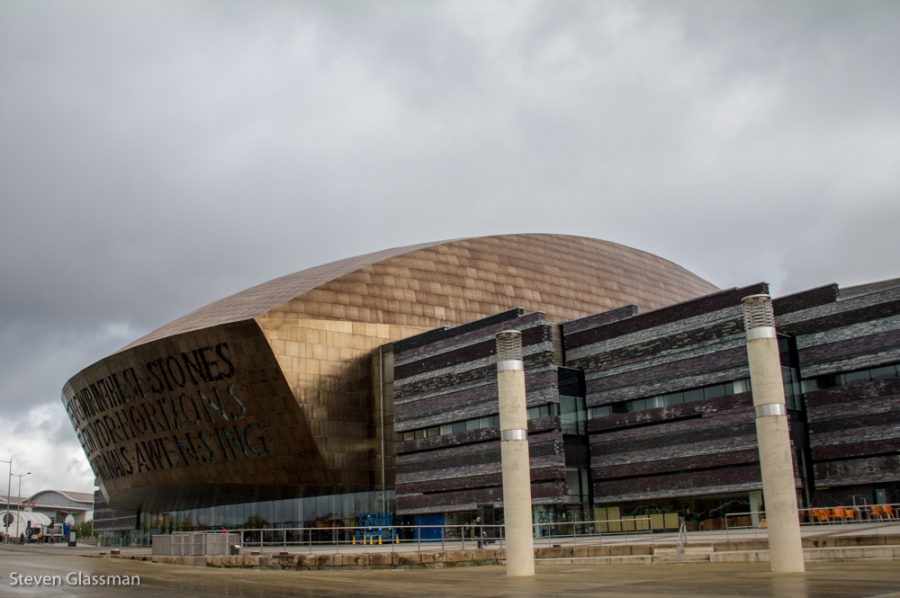 On my last trip to the UK, we took a day trip to Cardiff by train out of London’s Paddington Station. This makes Wales my fifteenth country visited! (Not including the US.) 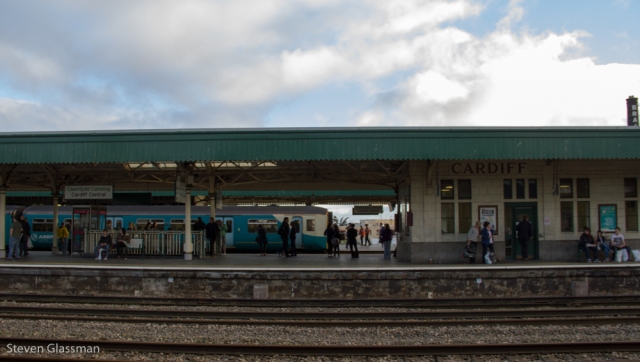 Cardiff is a fascinating little city.  We didn’t see even a third of what the city has to offer, but we did take a stroll past this nifty clock down Queen Street. 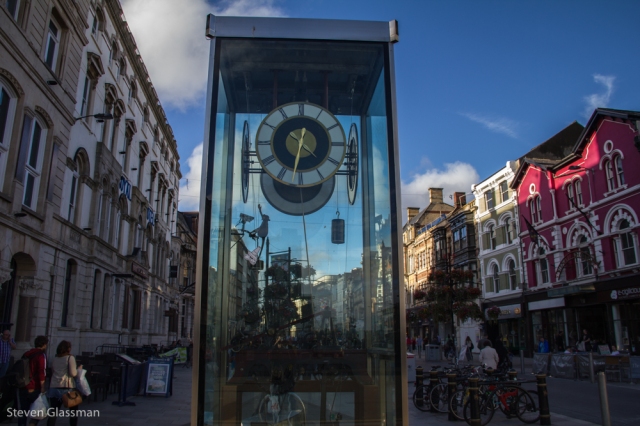 At the end of the street are the outer walls of Cardiff Castle. 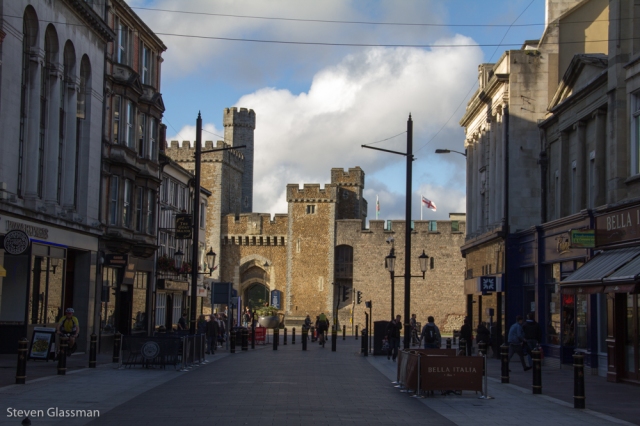 Through the main gate of those outer walls is the original Norman shell keep, flying the flag of Wales. 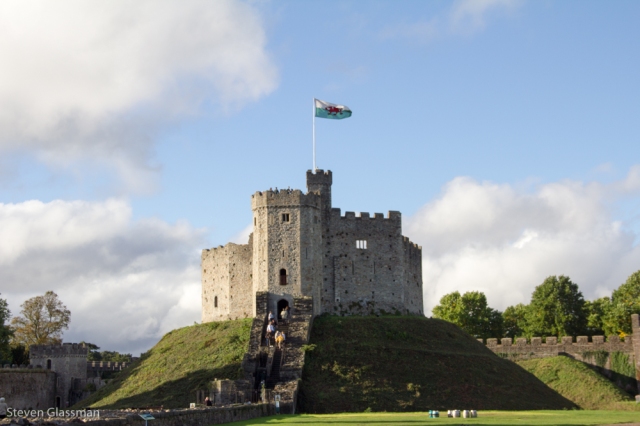 The red dragon motif is everywhere, as the symbol of Wales.  It’s also the symbol of the Brains brewery, which makes a pretty tasty beer.  I had a Brains Green Dragon at lunch when we were back in London later in the trip, and I wish I’d had a Brains while we were closer to the brewery- I’ve been told that the flavor loses something in transit. 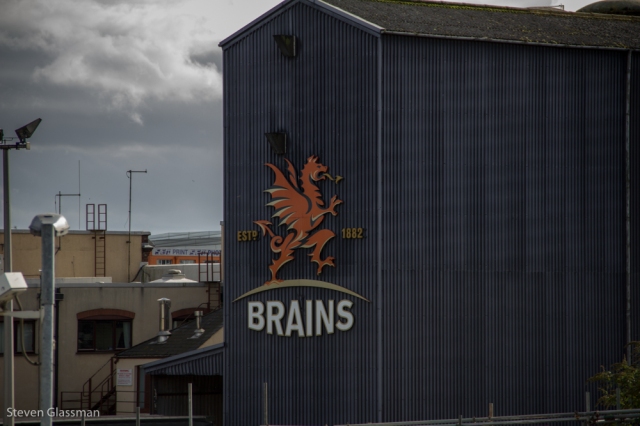 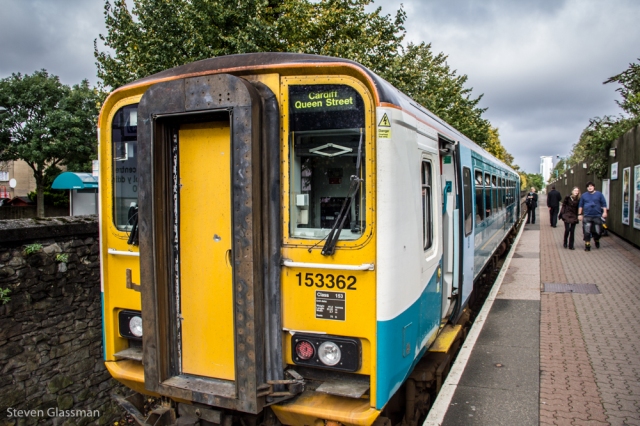 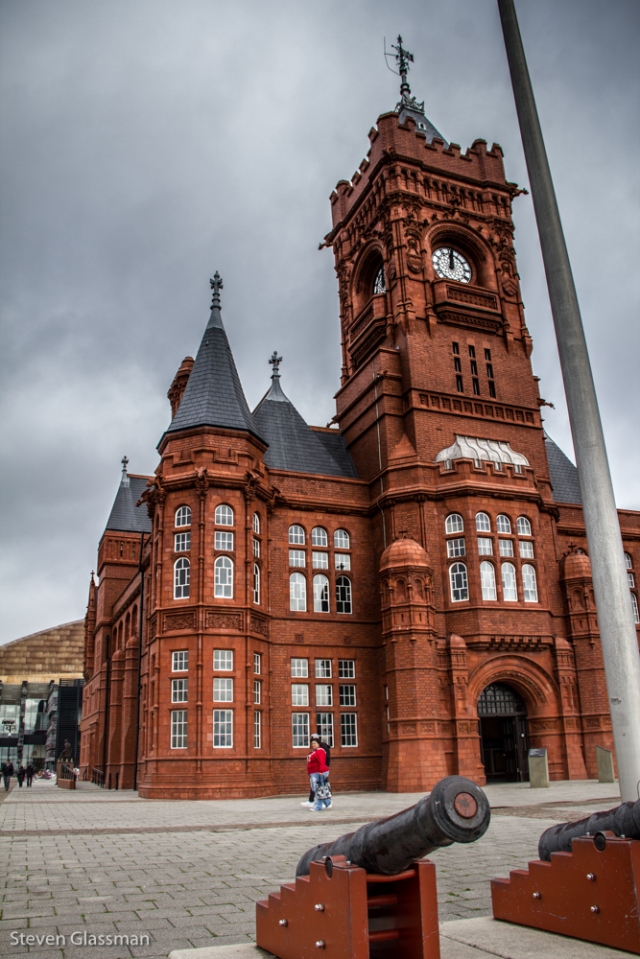 …and you’ll walk past the Wales Millennium Center.  If you watched Torchwood, this will look familiar.  This is an arts center which hosts events like concerts, opera, ballet, and so forth.  The dome is clad in steel that was treated with copper oxide, to represent Cardiff’s steel making history. It was designed to withstand the weather conditions on the Cardiff Bay waterfront.

Inscribed on the front of the dome, above the main entrance, are two lines written by Welsh poet Gwyneth Lewis. The Welsh version is Creu Gwir fel gwydr o ffwrnais awen, which means “Creating truth like glass from the furnace of inspiration”. The English is In These Stones Horizons Sing.  (Thanks, Wikipedia!) 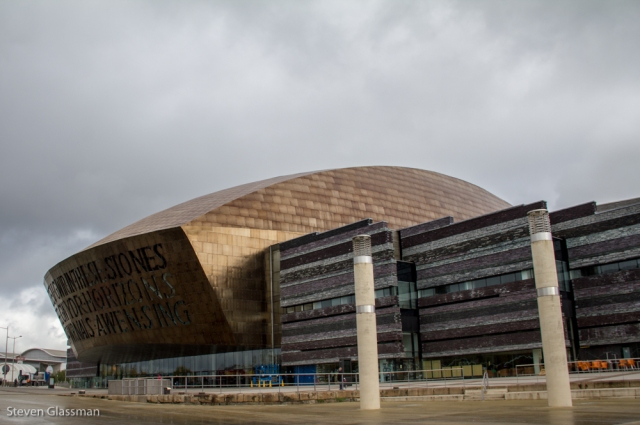 Walking further along the bay is the World Harmony Peace Statue. You hold the handle of the torch, and make a wish for world peace. 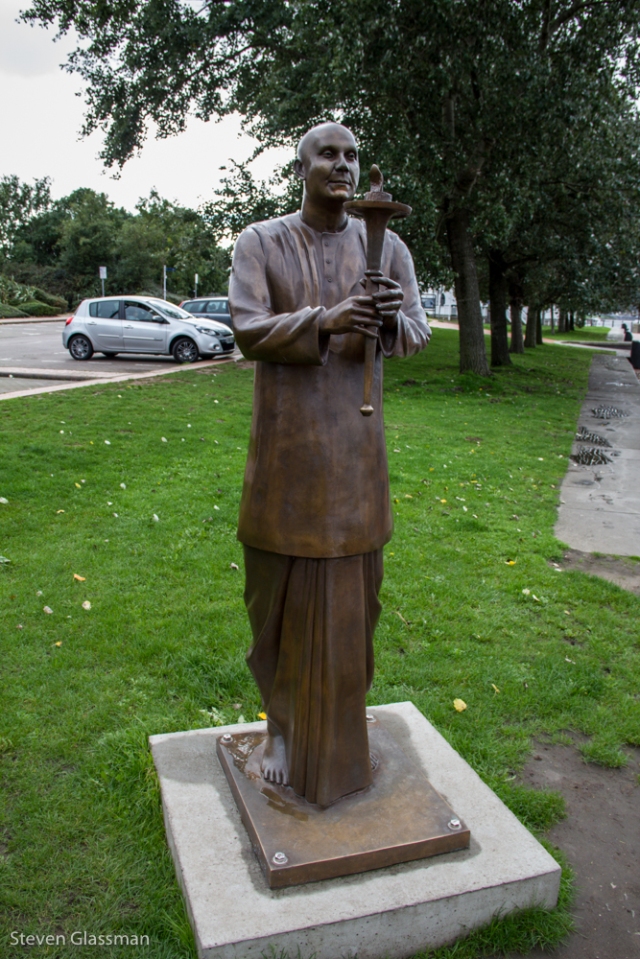 After a little bit more walking, we arrived at the goal for this side trip:  The Doctor Who Experience, situated in Cardiff Bay until 2017.  The first part of the DWE is an interactive walk-through adventure with the eleventh Doctor in which you get to fly the TARDIS, so that’s pretty fun.  Also, you get to learn how to walk like a scarecrow soldier or a Cyberman. 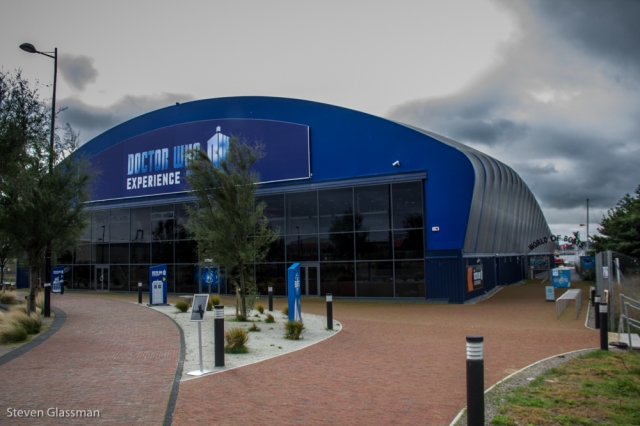 After the interactive part of the Doctor Who Experience, there’s an exhibition.  I took a bajillion photographs, but I won’t bore my non-geeky readers with all of those.  I selected just seven pictures to give you a sense of the place.  If you’re not into Doctor Who, just skip down to the picture that has me in it, and we’ll pick up the post from there.

The first picture is the outfit of Tom Baker, the fourth Doctor.  This was part of a row of outfits worn by each of the first ten Doctors. 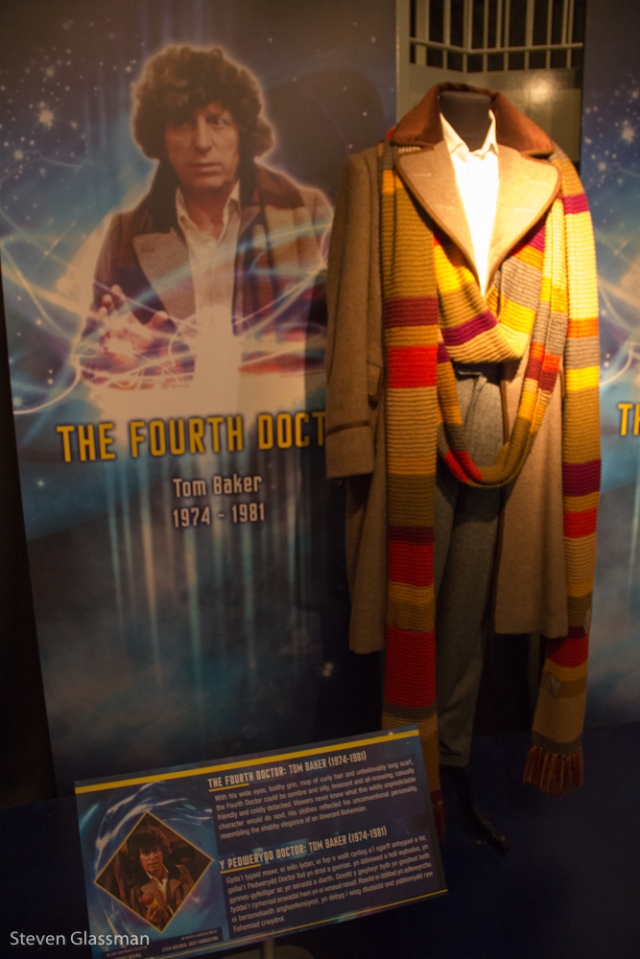 Similarly, the companions each had outfits in the exhibition.  Here’s Elisabeth Sladen’s Sarah Jane Smith outfit. 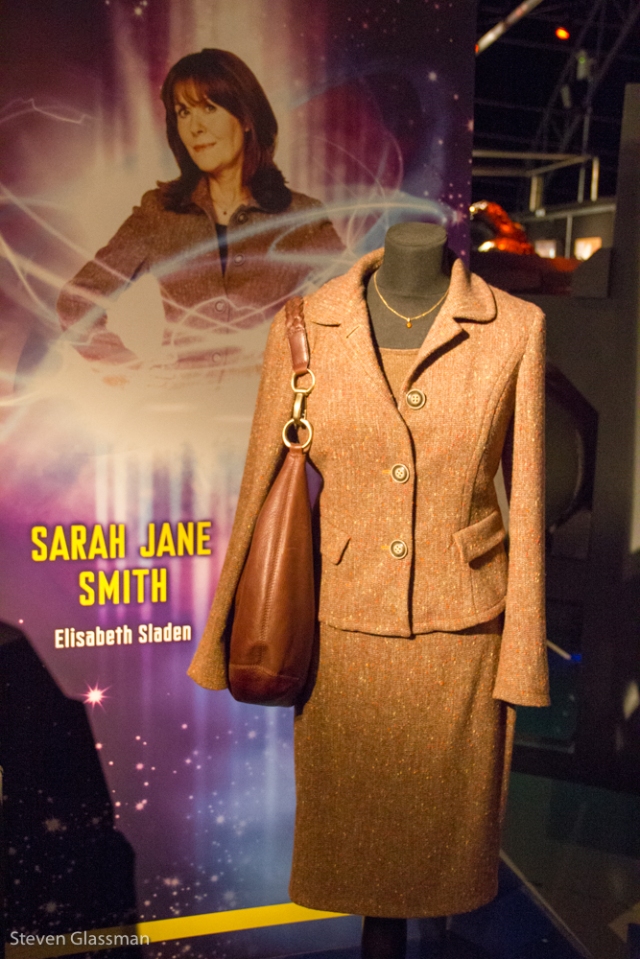 There were several TARDIS control rooms in the exhibition.  I’m pretty sure this was the fourth Doctor’s control room. 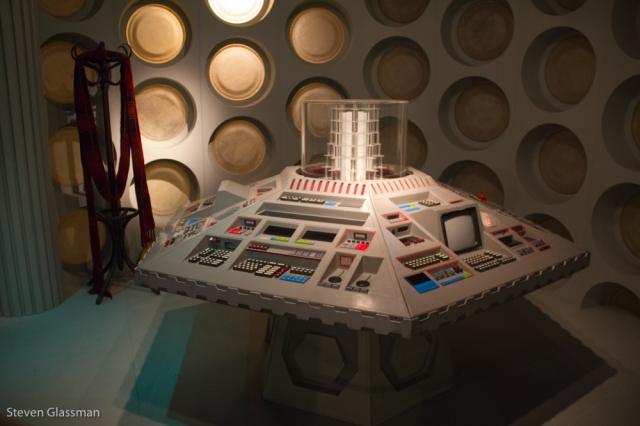 …and this was definitely Nine and Ten’s control room, brought over to the DWE in its entirety after the regeneration into Eleven.  They cleaned it up a bit, but you can still see smoke and fire damage from Ten’s fairly explosive regeneration. 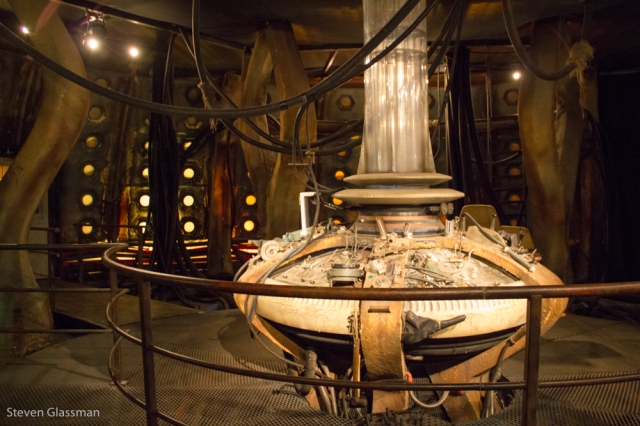 No Doctor Who exhibit would be complete without  my favorite robot dog of all time, K-9. 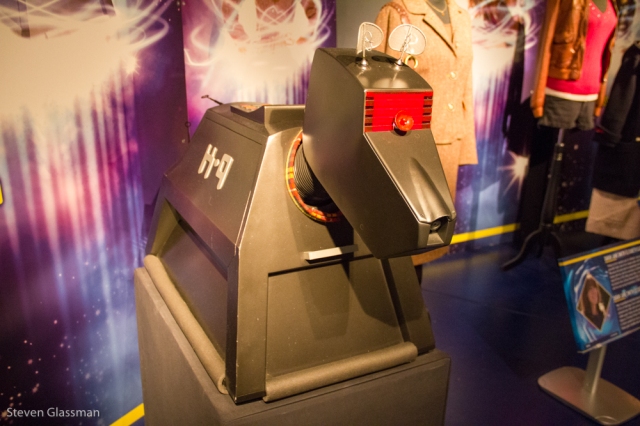 Most of the Doctor’s adversaries were represented, but I particularly liked this Cyberman. 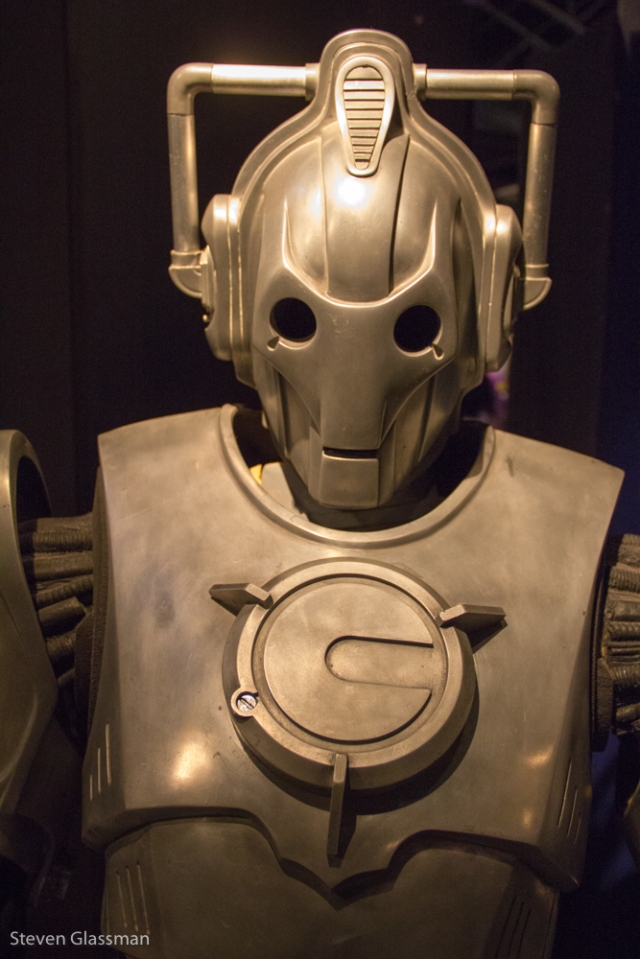 Of course, there were friends of the Doctor present as well.  Here’s me, hanging out with the Face Of Boe. 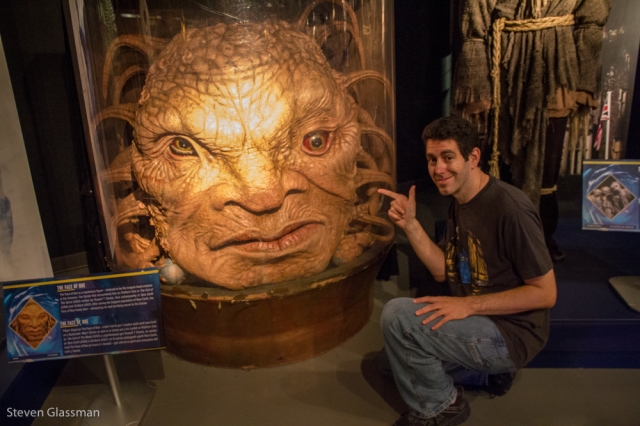 Ok, that’s enough geekery for this post.  Once we were done at the Doctor Who Experience, it was time to walk back from Cardiff Bay.  I had to force myself not to walk like a Cyberman.

Cardiff Bay is really a very pretty place.  Here’s a view out from the dock. 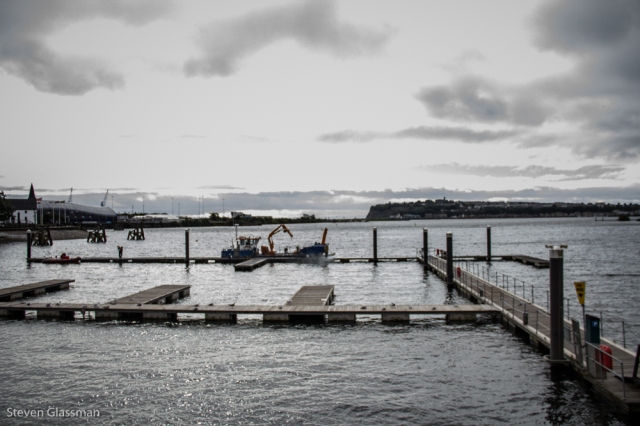 There’s a number of fascinating sculptures around the Bay.  This was my favorite- the Merchant Seafarers’ War Memorial, by sculptor Brian Fell.  It’s designed to look like both a face and the bow of a ship. 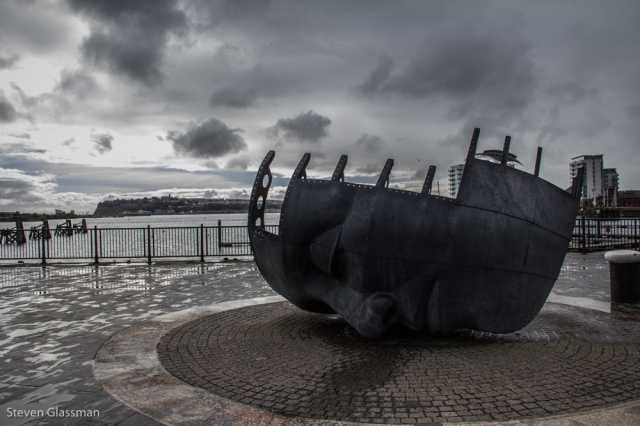 Walking back up the wide sidewalks from the Bay to the little rail station, we couldn’t help but notice all the spiders that were out.  I think they were collecting food and preparing for the winter. 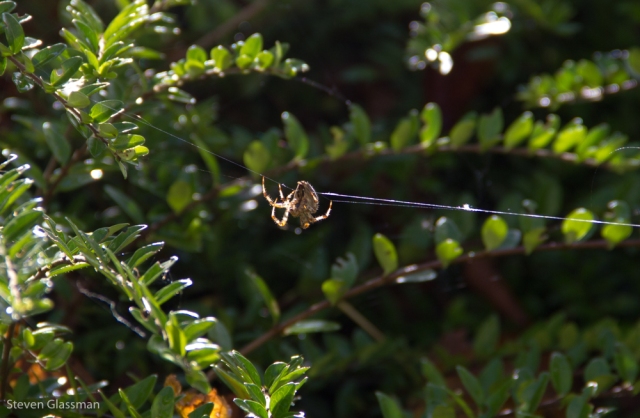 Last but not least, on our way out of the Cardiff Bay area, this little cutie walked right up to us, flopped over, and demanded to be loved.  Who could say no to those little paws? 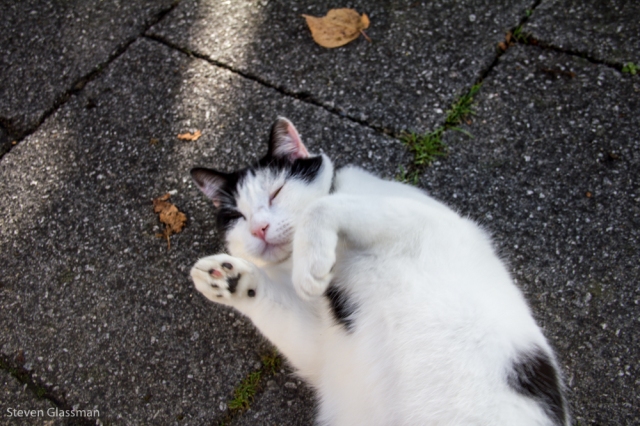 Have you ever been to Cardiff? Did you learn to walk like a Cyberman while you were there?