1) I wanted a chance to visit with Sarah Stäbler and her husband Tobias before their baby is born.  I probably won’t get another chance to hang out with them before I leave Germany.

2) I wanted to find Beatles-Platz.  It’s a tiny section of the Reeperbahn adjacent to where the Beatles played.  I couldn’t find it last time I was in Hamburg, but I went this time armed with more information and more time to look for it.  More importantly, I had looked at pictures of it this time, so I knew what the heck I was looking for.

3) Another Category One station, the Hamburg-Altona station.  Then there were five…

I’d like to begin the show and tell portion of this post by commenting that I had forgotten just how strange the Hamburg main train station is.   It’s set up a little bit like an Oreo cookie-  the restaurants and shops are on the upper levels at either end, and the creamy center of train platforms is down a flight of stairs.  The two ends are connected on the inside of the building only by way of the train platforms. 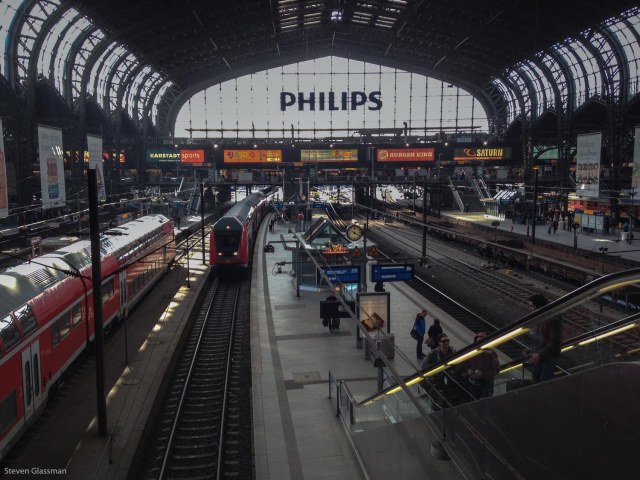 Beatles-Platz is right at the intersection of Große Freiheit and the Reeperbahn.  The “statues” aren’t really anything of the sort, they’re actually just metal outlines of the Beatles.  The three in front are John, Paul, and George, and the drummer is supposed to look a little like Ringo and a little like Pete Best.

Standing a little way off to the right is one more guitarist.  The Internet says the fifth Beatle is supposed to represent Stuart Sutcliffe, the original Bass player for the band.   You can’t see it clearly in these photos, but the Beatles-Platz is circular, and is paved black to look like a vinyl record.    It’s fairly striking.

On Saturday morning, I had brunch with Sarah and Tobias.  As is my custom, I completely misjudged my travel time and arrived ridiculously early.  This gave me some time to look at the artwork on the buildings nearby. 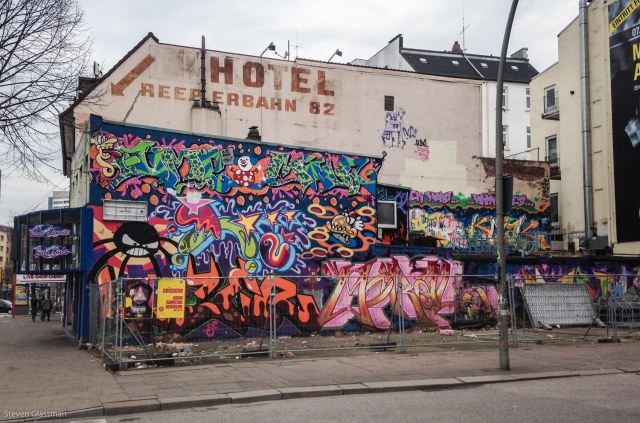 This was a giant door leading into a tattoo and piercing shop. 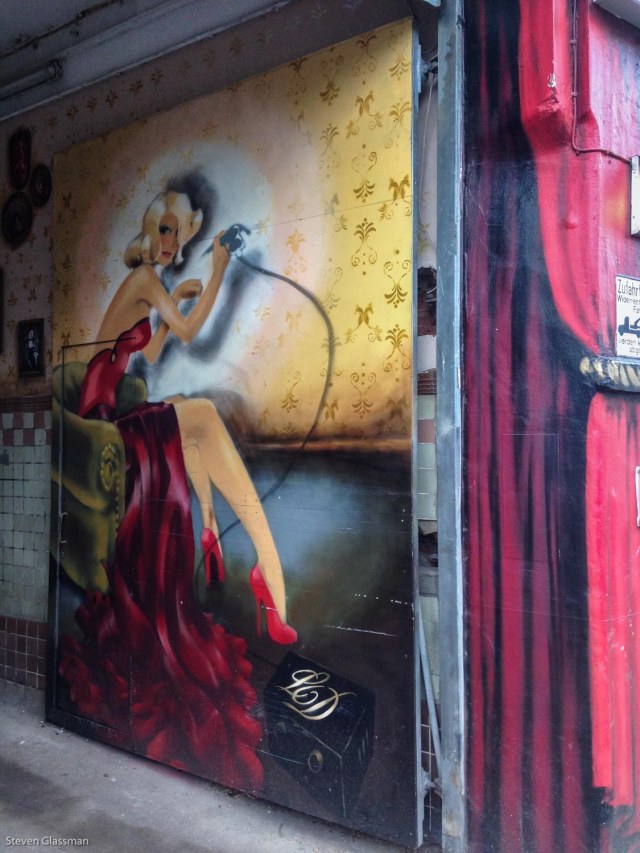 An apartment building.  The bird was striking.  The graffiti over top of the artwork was really unfortunate. 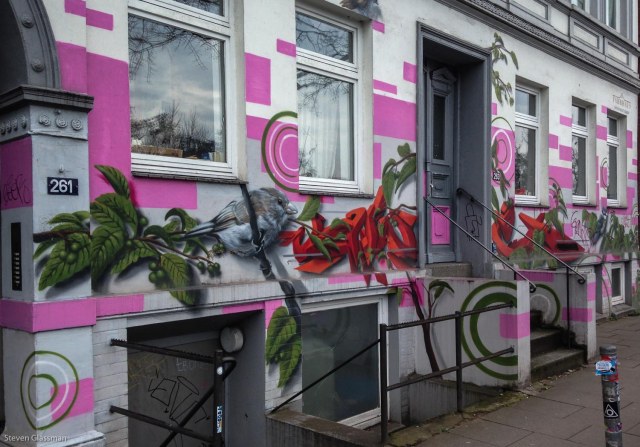 I’m not sure what to make of this one.  It reminds me of someone I know, though… 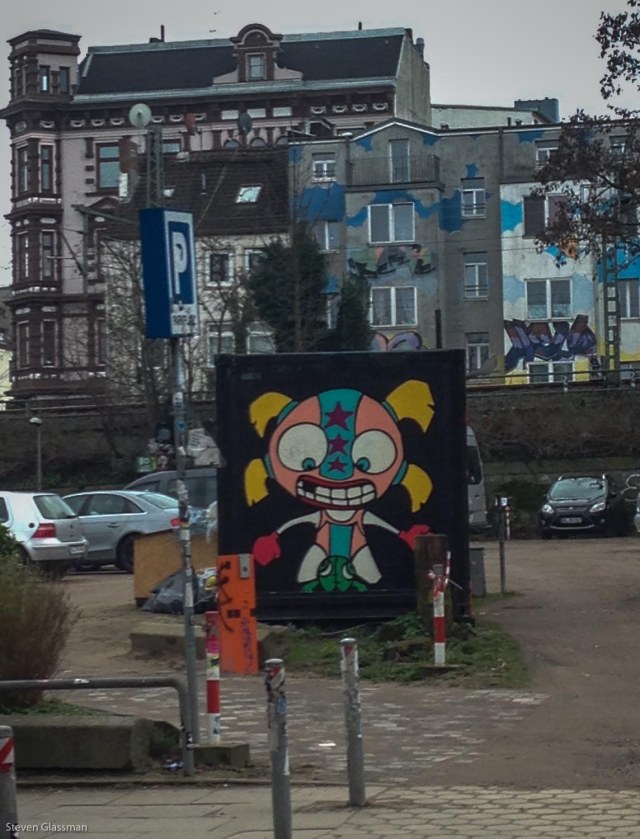 People in this town make art with biiiiig ladders. 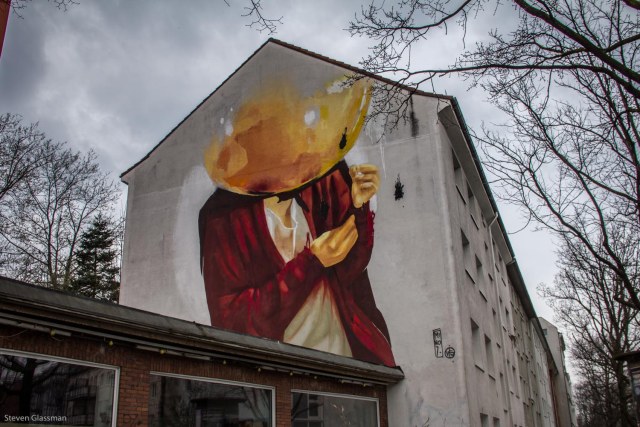 This one was totally my favorite.  The girl on the purple scooter is awesome.  It also reminds me of someone I know. 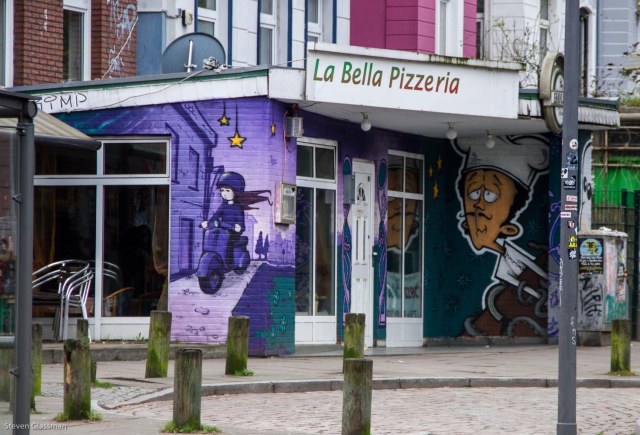 Brunch with Sarah and Tobi was pretty great- good food, and good company.  It’s not completely visible in this picture, but Sarah is wearing a How I Met Your Mother maternity shirt.  It says “I’m going to be Legen…wait for it…”

After brunch, we walked around the neighborhood a tiny bit until we reached the U-Bahn station I needed to move on to the next part of the day.  Next up, Miniatur Wunderland!

It took me two visits to find Beatles-Platz.  Are there any sights that you haven’t been able to find on the first try?

11 thoughts on “A Hamburg Weekend.”