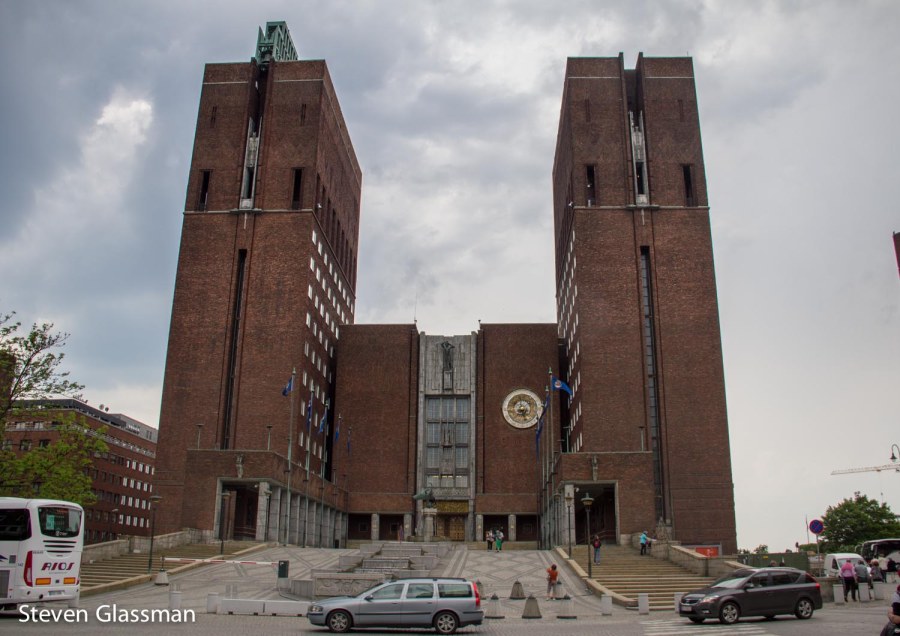 The third stop in my traipse through the Nordics after Helsinki and Stockholm was Oslo.  I traveled from Stockholm to Oslo by train, a decision I actually kind of regret.  It took three or four times as long, and thanks to poor train management, it was damn near 10:30 at night by the time I checked into my hotel.  I made the best of it though. 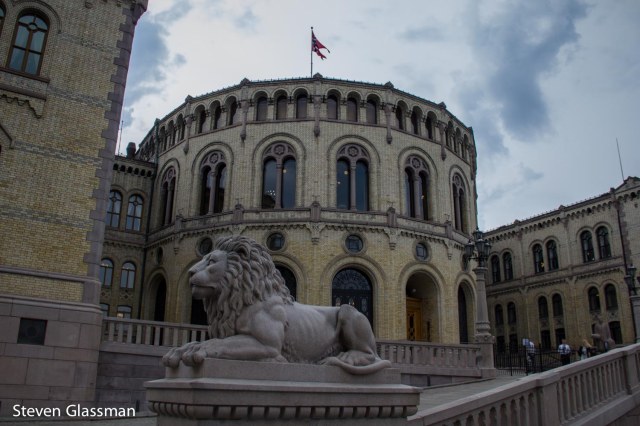 This is a seafront plaza behind the city hall.  That building in the distance is the Nobel Peace Center.  I’ll come back to that. 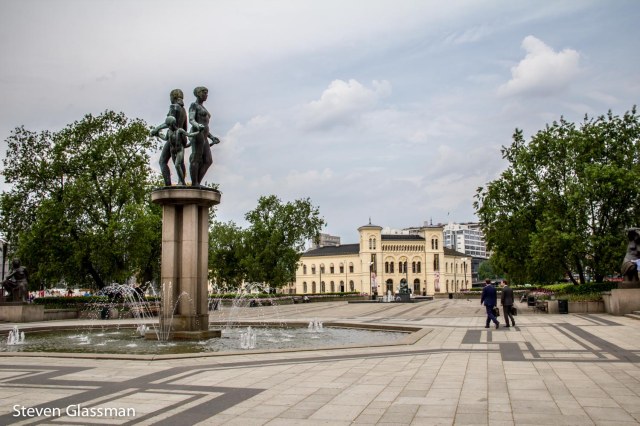 The Oslo Radhus (City Hall) has some fascinating carvings on the walkways up to the main entrance doors.  I only photographed a few of them. 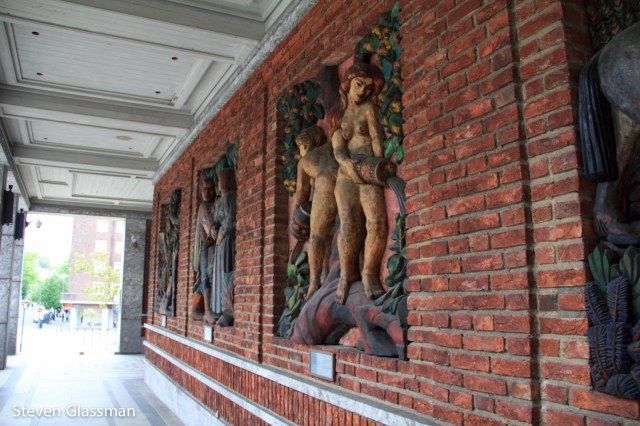 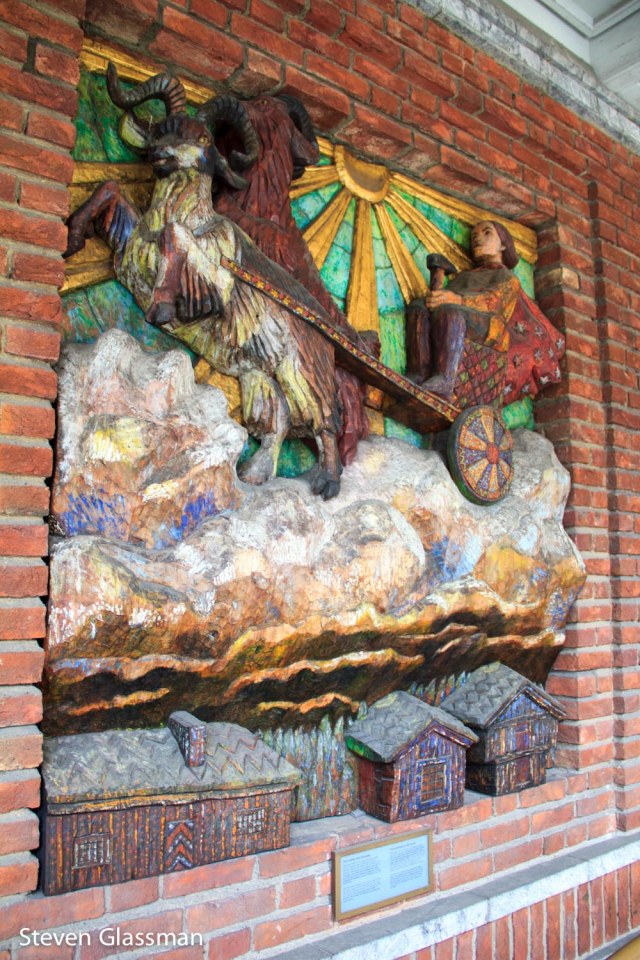 The structure in the tower on the left is a set of carillon bells which rings every hour.  The clock face visible in the center is an astronomical clock- a more traditional clock face is visible on the opposite side of the building from the seafront. 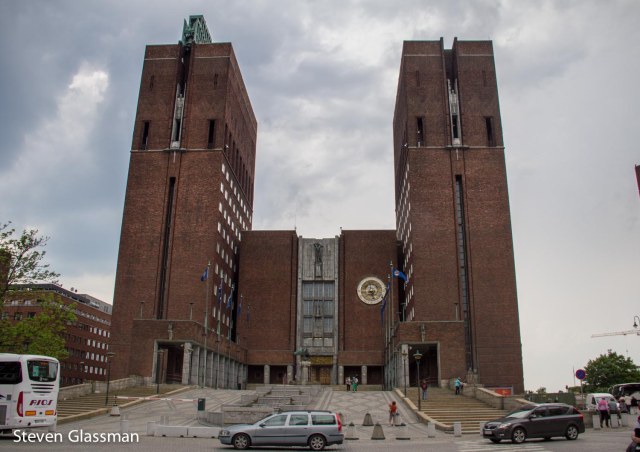 Here’s a closer view of the  Nobel Peace Center.  While most of the Nobel Prizes are  awarded in Stockholm, the Peace Prize is given out in Oslo. 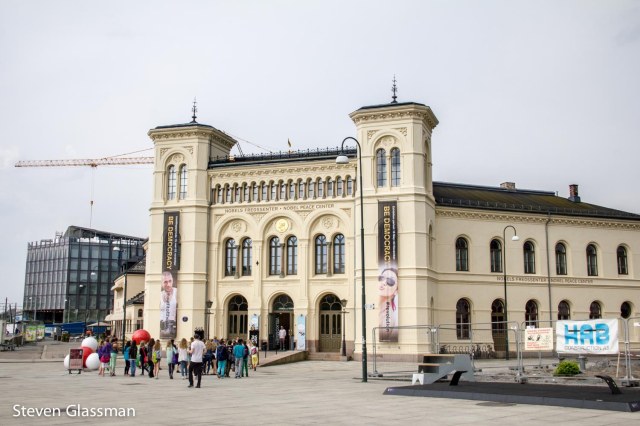 The exhibits in the Peace Center weren’t quite as interesting to me as the exhibitions in the Nobel Museum back in Stockholm.  This one looked pretty nifty, though. 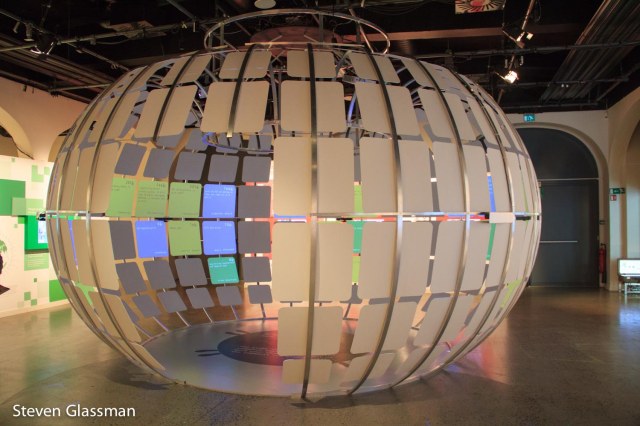 These screens contained changing images of Nobel winners.  Kind of a nifty visual presentation, in my opinion.

In one of the stairwells, I found this anti-Nazi cartoon that I quite liked.

This sculpture by Monica Bonvicini, called She Lies, is made of stainless steel and glass panels, and it floats next to the Oslo Opera House.  The art installation floats on the water on a concrete platform twelve meters above the water surface.  The sculpture turns with the tide and wind, which changes the look of the reflections.

…and now for something completely different.  Say hello to the Holmenkollbakken, a ski jump and stadium with a hill size of HS134, whatever that means. 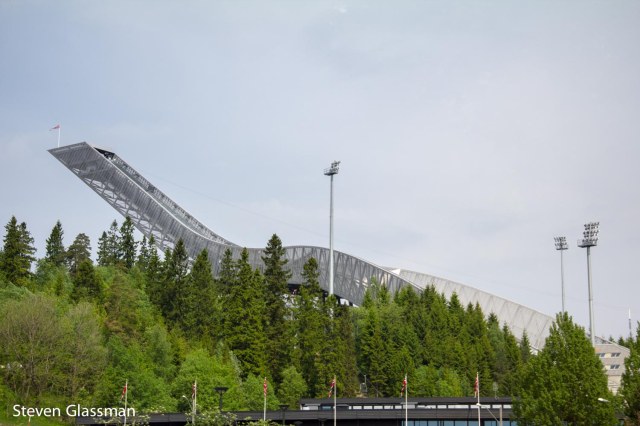 One of Oslo’s attractions is Bygdøy, a museum island.  The Kon-Tiki Museum, the Fram Museum, the Viking Ship Museum, and several others are on Bygdøy. 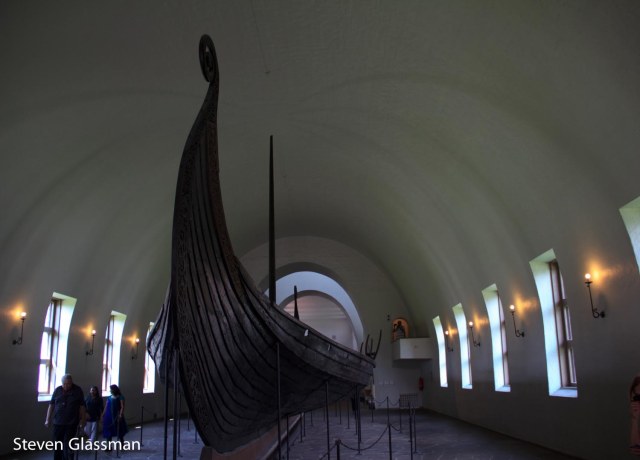 The Kon-Tiki Museum was of particular interest to me because I vaguely remember seeing a film about the Kon-Tiki at the Society of the Four Arts when I was in middle school.  For those who are unfamiliar with the Kon-Tiki, it was the raft used by Thor Heyerdahl in his 1947 expedition across the Pacific Ocean from South America to the Polynesian islands.  The Kon-Tiki expedition is pretty fascinating stuff.

The Fram Museum is another museum about a boat.  In this case, it’s about a ship which was used in both Arctic and Antarctic expeditions.  The Fram, which is entirely preserved in the museum, sailed farther north and farther south than any other wooden ship. 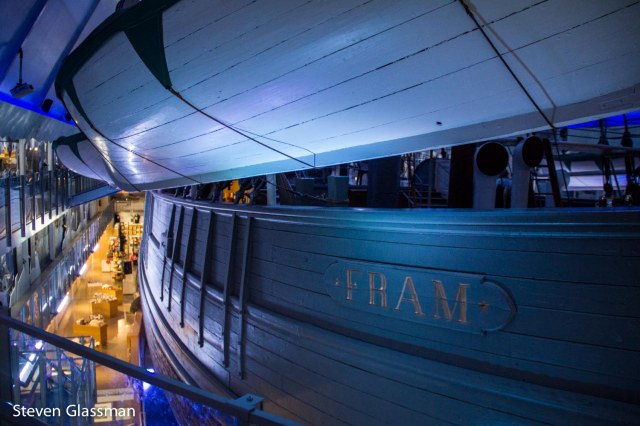 This poster was in the Fram Museum, and it made me giggle. 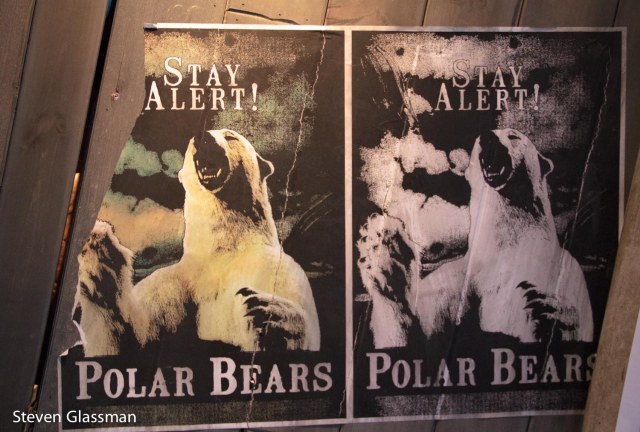 After I crossed back from Bygdøy by ferry, I walked past a building that housed a movie theater.  Inside, there was a life-sized Toothless and I couldn’t resist snagging a picture.  Moving on…

This is a view down Karl Johan’s Gate, one of the main streets in the city. 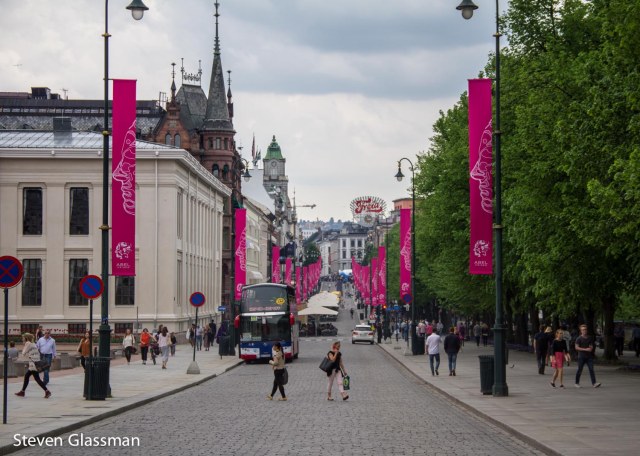 The opposite end of Karl Johan’s Gate ends at the Royal Palace.  This is actually as close to the Palace as I went, because it was starting to rain and I wanted to go to the National Gallery. 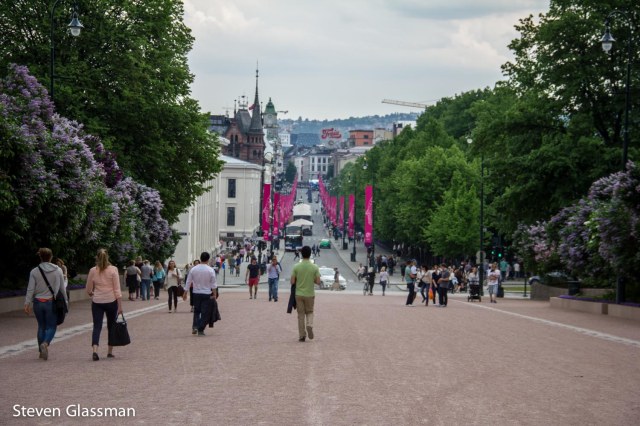 The National Gallery has some truly amazing pieces.  A lovely little Degas, anyone?

I’ve seen a few Thinkers in my lifetime- the first one I saw was actually in 1997 in a touring exhibition of Rodin’s work.  I’ve also seen the one in the Gates of Hell in the Bay Area of California.   There are 28 full-sized castings out there, and a slew of smaller copies as well.  I never pass up an opportunity to snag a picture of a Thinker when it crosses my path.

This is the real reason I wanted to go to the National Gallery:  Edvard Munch’s “The Scream.”  This is one of four versions Munch did of this piece, actually, but this is easily his most well-known work.    Oslo also has a Munch Museum, but this painting isn’t there, it’s here in the National Gallery.  Always do your research before you travel, children- it helps you to see amazing things. 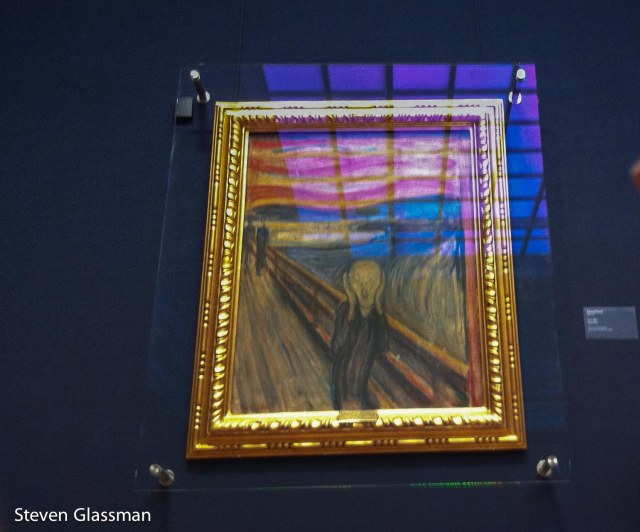 While I was in Oslo, I took advantage of a well-timed concert schedule to see the Oslo Philharmonic play. 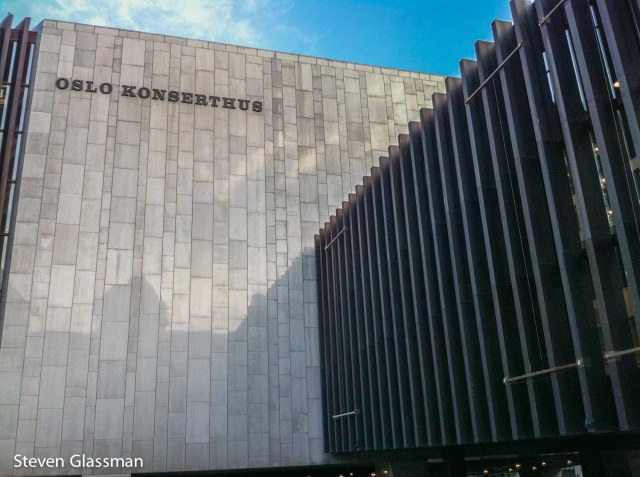 I’m not so crass as to take a picture during  the show.  This was a program of Don Juan from Strauss, a little Mozart, and the entirety of Ludwig van Beethoven’s Symphony No. 3 ‘Eroica.’

Have you ever been to Oslo?  What kinds of art and music do you like to see when you travel?