From Copenhagen, it’s a reasonably short flight to the last stop in my trip through the Nordics:  Reykjavik, Iceland!

The geography in Iceland is really like nothing I’ve ever seen.  This is an island that has both volcanoes and earthquakes.  There are fields of volcanic rock, waterfalls, and crystal clear lakes.   Geothermal pools provide hot water for the island, and much of their power comes from the geothermal energy as well.

This is a field of volcanic rock, covered in a type of moss that the four legged folk of the island really like to munch on.

I was in Iceland in the spring, so things were fairly green.

One of the major tourist attractions in Iceland is a tour of the Golden Circle.  The first thing that most folks see on a Golden Circle tour is the rift valley in Þingvellir National Park.   Iceland sits on the border between two of the major tectonic plates-  the North American plate and the Eurasian plate.  The space where they meet has formed a valley with a lake in it.  This is the rift valley.

The edge of the North American plate has some interesting rock formations- you can see these trenches that go in almost straight lines for miles and miles near the lake.

The second stop on a Golden Circle tour is Gullfoss, or “Golden Falls.”  This enormous waterfall is one of the most popular tourist attractions in Iceland.  For a sense of scale, look at the rocky outcropping on the left side and the path leading to it along the left edge of the photograph.  You can see people getting close to the falls.

There were three different vantage points to see the Falls.  This was the easiest one to get to.  There’s also the outcropping in the previous photo, and a path that goes down the face of the cliff I’m standing on here.  Lots and lots of stairs to get to that one.

This is the view from the rocky outcropping I mentioned before.

Across the street from the visitor center near Gullfoss, there was a small group of Icelandic horses hanging out near the fence.  There are places throughout the island where you can rent a horse.  They’re really quite sweet.  You can’t tell from the photo, but this one was using the barbed wire to scratch an itch.

The third stop in a Golden Circle tour is the Haukadalur geothermal area, a hill containing the Great Geysir, the one for which all other geysers are named, another geyser named Strokkur, and twenty or thirty smaller geysers and thermal pools.

Here’s Little Strokkur, not to be confused with the big one.

I didn’t catch a name for this thermal pool but the color was striking.  Also, the mist coming off of this pool had a strong sulphur smell, a little like rotting eggs.  Anyone who grew up with well water in South Florida will probably know the smell.  The hotel room sink in Reykjavik also had this smell-  the locals get used to it, I think.  It wasn’t unpleasant, just strong.

This is Great Geysir.   Geysir doesn’t erupt much these days, although earthquakes can stimulate eruptions for a little while. 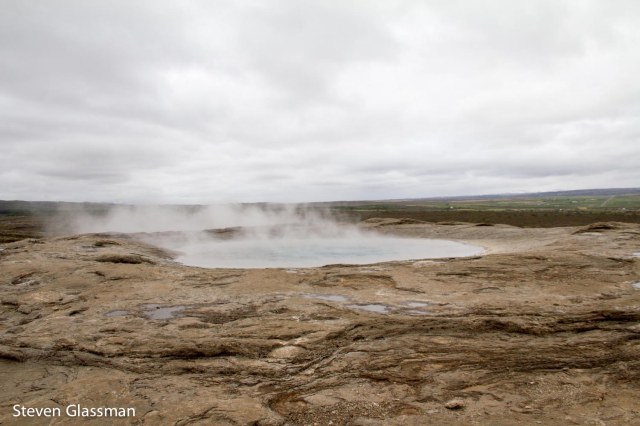 Strokkur, on the other hand, goes off every five minutes or so.  It’s rather spectacular to see.

I even managed to catch one of Strokkur’s eruptions on video.

So that’s the Golden Circle.   You’ll need at least half a day to see all of that.

Back in Reykjavik, you’ll see a number of very distinct structures.  This is Hallgrímskirkja.  This is the tallest church in Iceland, and so naturally, I had to climb it.

From the observation deck at Hallgrímskirkja, this is what the main part of Reykjavik looks like.  I can actually see my hotel in this picture.  There’s a main street full of bars and restaurants on the right side of this picture, but you can’t really see where the road is clearly from this vantage point.

Looking in the opposite direction, you can see the sphere of Perlan, or The Pearl, a structure built atop five hot water storage tanks.  There’s a viewing platform at Perlan also, and I’ll come back to that. 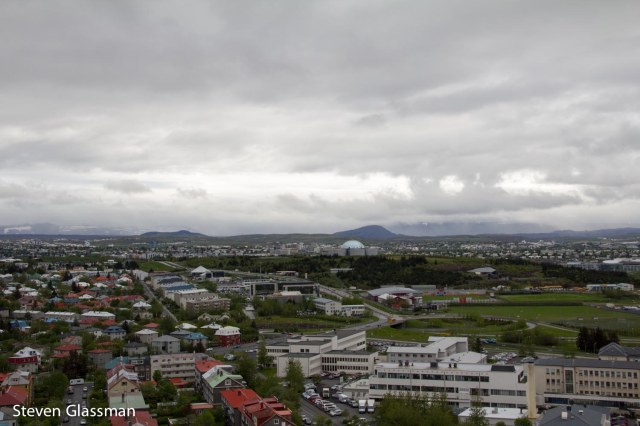 This is the interior of Hallgrímskirkja.

Now that I’ve shown you the church, I’d like to point out that Reykjavik has a rather massive ::ahem:: Phallological museum.  Translation: Penises!  Penises for everyone!   Regrettably, I didn’t take the time to go to the penis museum, but I’m sure it was just turgid with the learning. 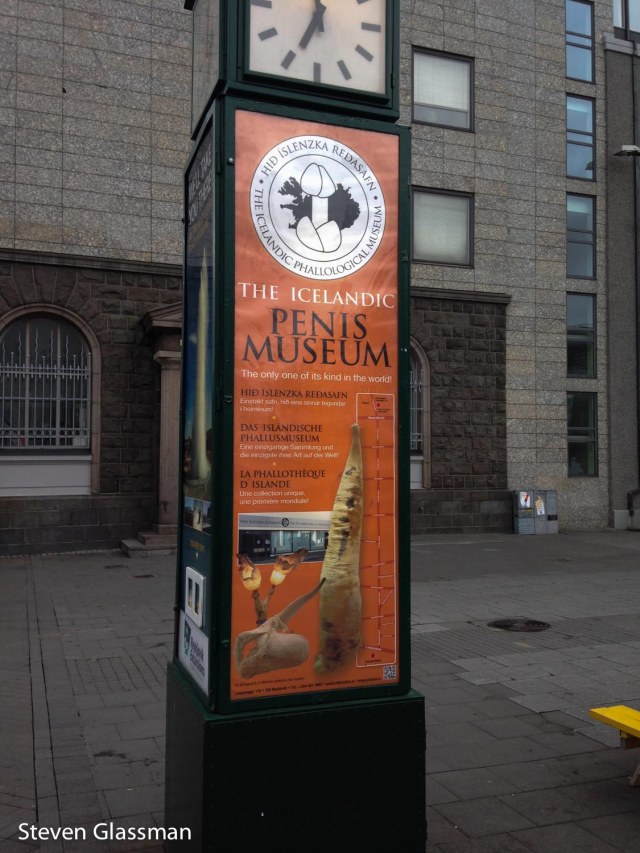 The problem with writing blog posts too long after the travel dates is that I don’t remember exactly why I took this photo, other than that it looks pretty cool. 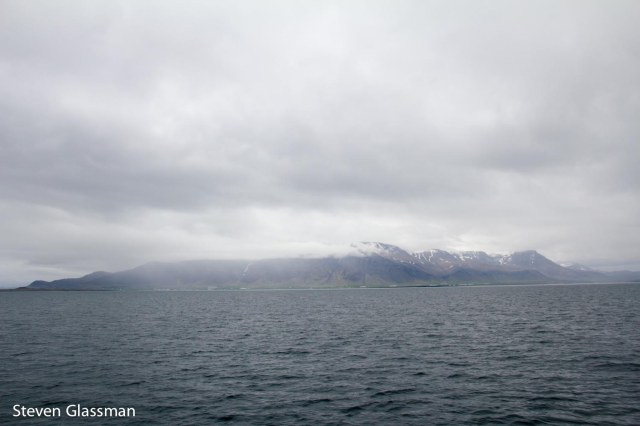 It’s nice to know that my knack for finding friendly kitties extends to Iceland too.

This is Sólfar, or Sun Voyager, perhaps the most photographed sculpture in Iceland.  The sculpture, by Jón Gunnar Árnason, is made of stainless steel.   Unveiled in 1990, the artist wanted Sun Voyager to represent a ship of dreams, an “ode to the sun symbolizing light and hope.”

Every major city needs a great concert hall, and Reykjavik has the Harpa Concert Hall, home to the Icelandic Opera and the Iceland Symphony Orchestra.  It also functions as a conference center.

I mentioned the Perlan earlier-  I took the time to go out there and climb the dome.  It gave me a nice perspective of the city from the opposite side, looking back toward the sea.

The downtown part of Reykjavik was pretty great.  While I was waiting for a tour that I’ll talk about in an upcoming post, I stopped at Icelandic Fish & Chips Organic Bistro to kill some time and get a snack.  I had been craving chocolate cake, and this really hit the spot-  delicious (and gluten free!) chocolate cake, perfectly moist and soft, paired with a nice cup of chamomile tea.

I would go back to Iceland just to have this cake again.  It was that good.

There were several theme places in Reykjavik, including a Chuck Norris restaurant that I didn’t see until I was about to leave, and a few doors down from my hotel, the Lebowski Bar.  This place is fun and friendly and has really great burgers and shakes. 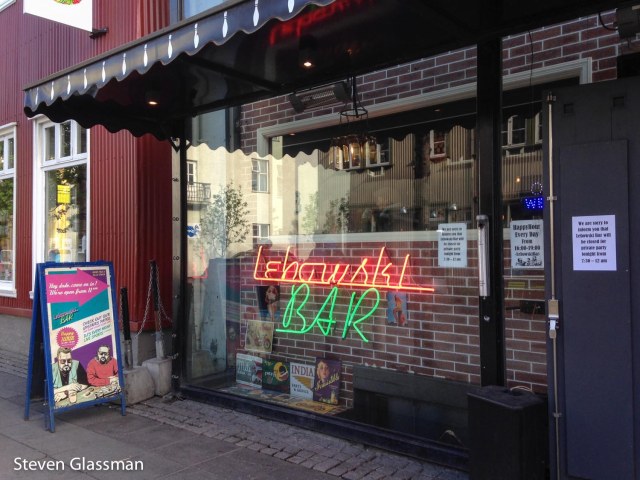 There was also a gay bar called the Kiki Queer Bar that I would have checked out, except they only opened Thursday to Sunday nights, and I was in the city from Monday to Thursday.  The inset of the photo is a note that was left in the black panel next to the front door-  I was not the only one who wanted to check out Kiki. 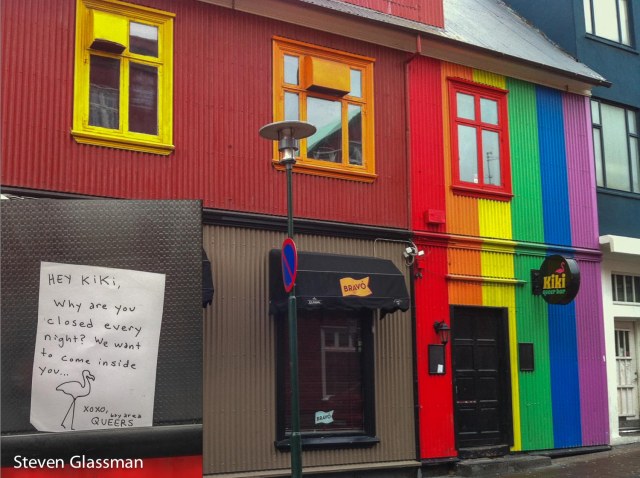 One of the things that people are curious about in Iceland is the food-  some people are keen to try Hákarl, or rotten shark meat.  I was not.  Hakarl is often described as one of the foulest tasting foods in existence.  Chef Anthony Bourdain described hákarl as “the single worst, most disgusting and terrible tasting thing” he has ever eaten.  Some people try whale, horse, or puffin.    I didn’t have any interest in whale meat, and I could go on a rant about the hunting generated by tourism- only about 5% of Icelanders regularly eat whale meat, but tourists do quite often.

While I wasn’t interested in fermented shark or whale, I was interested in trying puffin.  I would have preferred a nice puffin burger, but I could only find a few places that had puffin on the menu.   I chose Laekjarbrekka,  a restaurant on the main street with a really good TripAdvisor rating.   They had an “Icelandic Feast” on the menu that included shark, whale, horse, and puffin, but I didn’t go for that.  I had smoked puffin as an appetizer, and had a nice fresh fish for my main course.  I no longer remember the type of fish, but I can say that it was the best cooked plate of fish I’ve ever had in my life.    The picture below is puffin-  the entire bird has a body roughly the size of a can of Coke, so the amount of meat in a single bird isn’t very much.    The puffin meat tasted fishy, which makes some sense since the birds spend most of their lives on or near the ocean.

I saw this while walking through the city.  I’m not sure what it’s all about, but I suspect it’s just art. 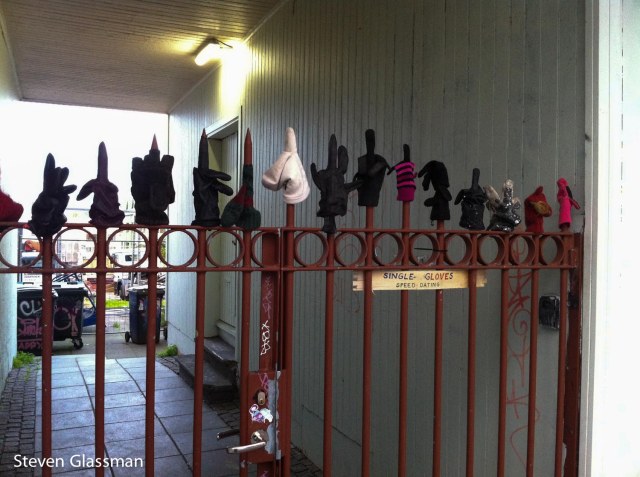 Lastly, this is a picture taken out of the window of my hotel room at 1:15 AM.  Reykjavik is one of the furthest north places I’ve ever been, and it was amazing to see that even after sundown, it was still kind of light.  It looked like this when I went to sleep, and the sun came back up just a few hours later.