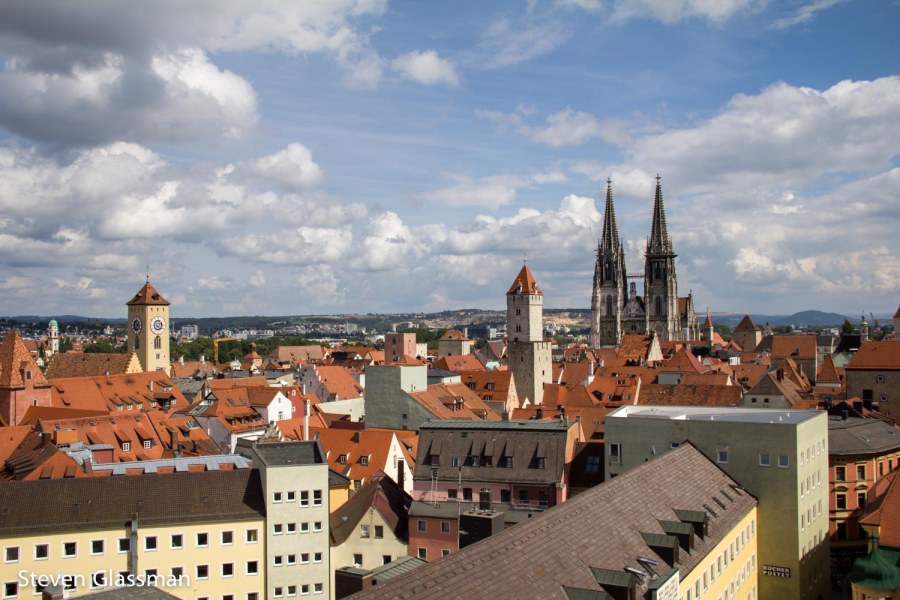 Earlier this month, I spent an afternoon checking out a bunch of the touristy things I can do without leaving Regensburg.  There’s a lot to see and do right here, and I didn’t want to leave it all unseen before I moved back to the US.  I started with a river cruise.

There are many great river cruises on the Donau (Danube) river, but I specifically wanted a short touristy river ride.   I found one that runs every hour or so during tourism season and runs about 45 minutes for the cost of eight and a half Euros.  At a touch after 11 in the morning, I set sail on the good ship Johannes Kepler.

It’s rather interesting to see the Stone Bridge from this perspective.  I’ve been all over the surface and around the temporary construction walkways, but this is the first time I was ever underneath the bridge.  By the way, pay attention to that tower with the clock faces on it.  We’ll climb that later!

Being on the tiny river cruise showed me things about Regensburg that I had never seen before.  For example, I didn’t realize that the villa of King Maximilian II was just walking distance down the river. 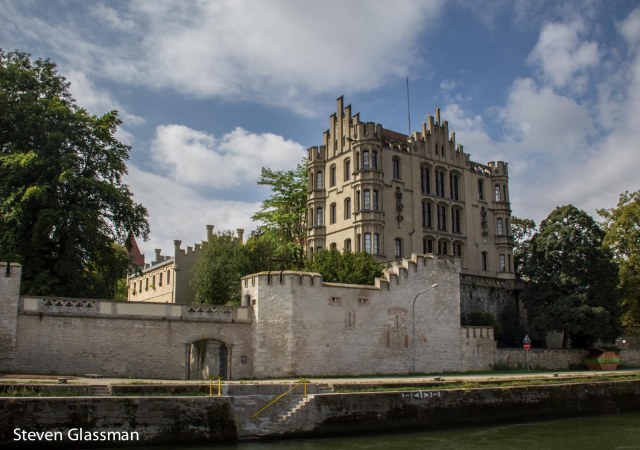 I don’t know who Klara is, but I really hope she had a nice birthday.

After we docked, I walked a short distance down the riverfront to the Schiffahrtsmuseum, or shipping museum.  Entrance was just three Euros.  The museum itself is contained inside two very old and beautifully restored ships.   The one pictured here is a paddle steamer.

What would a museum be without tiny models?

This is part of the engine room of the Ruthof, the paddle steamer which houses this part of the museum.  This stuff is absolutely huge.

Once back on land, I finally managed to get a photograph of the Boat Captain.  I don’t know this gentleman’s story, but I see him walking around town from time to time.  He’s usually wearing all white, and he’s always  got epaulets on his jacket.  I’ve always wanted a photograph of him, but he was always walking in the other direction.

I took a very brief detour at the Historic Wurstkuchl to grab some sustenance before I continued on my tourism day. So tasty!

Next, I went to the museum next to Regensburg’s famous Stone Bridge.  Most of this museum is free, but there’s a tower here which can be climbed for another two Euros.

“Historic stairs” means they’re really old and rickety and made of wood, I guess.

The top part of this tower used to be someone’s living quarters.  These are the rooms inside.

The benefit to living at the top of the historic stairs is the view-  this is looking East from the tower. 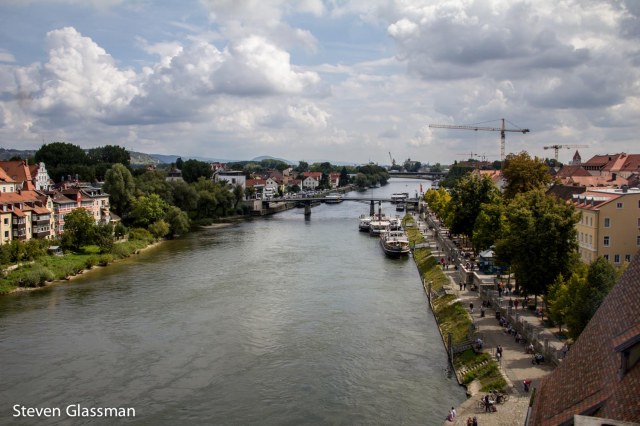 This is the view North from the tower.  When the bridge is not being renovated, this must be a fantastic people-watching view.

Here’s the Western view.  This picture was taken during HerbstDult, hence the ferris wheel visible in the distance.

One of the more interesting things about climbing the tower is seeing the mechanism that drives the clocks.  This tower has clock faces on three sides, and they’re all driven by a single mechanism.  This amazing little gearbox has long rods which connect to each clock face, and the electric motor beneath.    One motor for all three clocks. 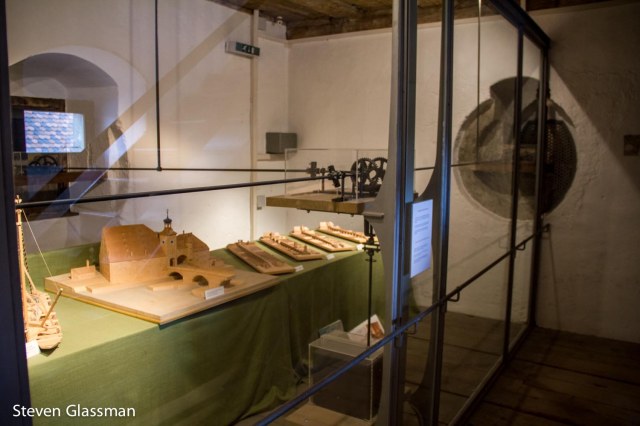 After climbing down from the tower, I walked around the free part of this museum for a few more minutes.  I’ve always liked that the Wappen, or coat of arms, for Regensburg is a shield with two crossed keys in it.

Next on my tourism day was  walk up the street to the Kepler Memorial House.  Johannes Kepler lived in Regensburg at the end of his life, and he fell ill and died in this city.  His old house is a museum now, with an entrance price of two Euros and twenty cents.

They could probably stand to give his bust a good cleaning.

The entire museum was in German, so I didn’t get much out of the description cards, but I still liked seeing the old equipment in glass cases. 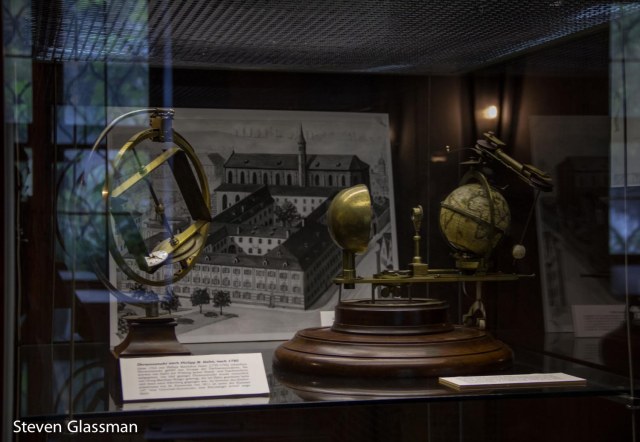 This globe is utterly fantastic.  Back in those days, they really took the whole “here be sea monsters” thing very seriously, I think.

After I was done at the Kepler House, I walked over to the Dreieinigkeitskirche, one of Regensburg’s many, many churches. 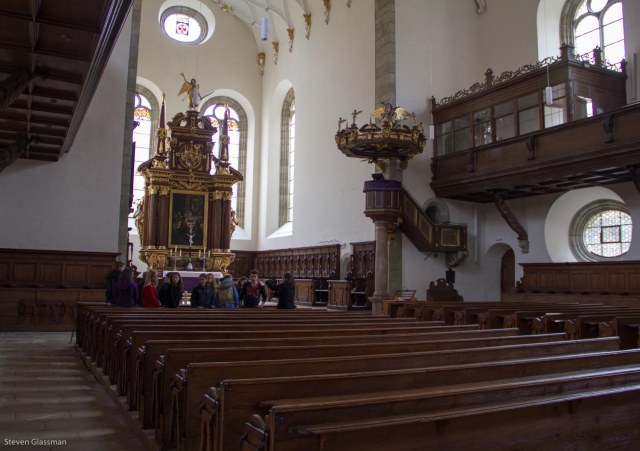 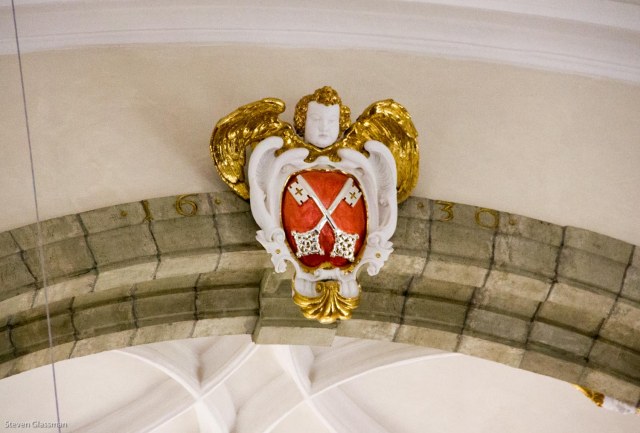 …and again with the keys! 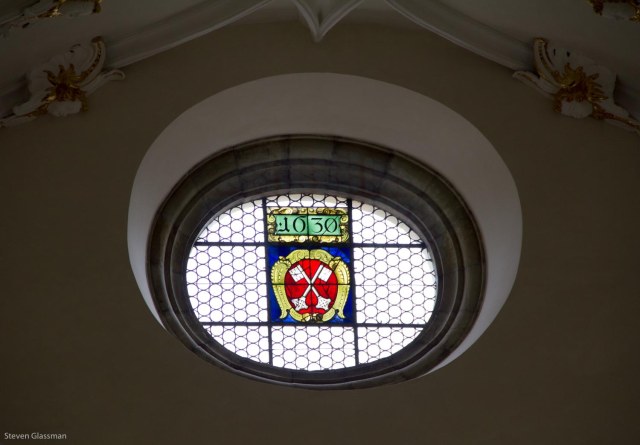 I’m always a little bit fascinated by the incredibly old glass you find in places like this.  These windows are not as crystal clear as modern glass, but the effect is kind of charming.

While the inside of this church is nice, that’s not why I was here.  I came to the church because for another two Euros, you can climb the tower.  I’ve been meaning to do this one for three years.  This is another place that wasn’t built for tourism-  they actually taped Styrofoam to one of the beams to prevent tourists from knocking their heads. 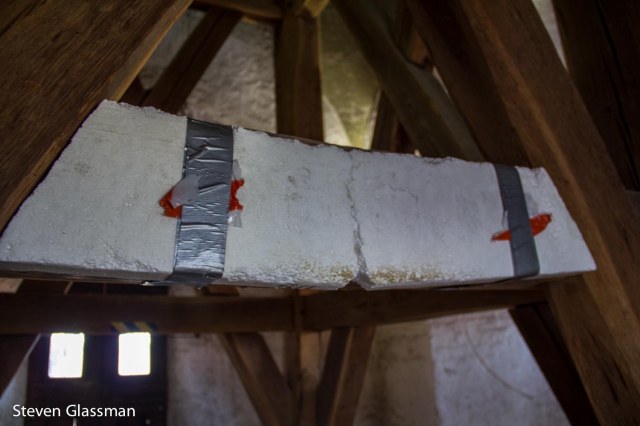 This is another historical stairway, I think.

Near the top, there’s a sign asking that you don’t touch the bell.

It’s quite tempting, though.  This is an amazing old church bell.

Why do I climb all these towers?  For the views, of course.    This is what the city’s main cathedral and the other clock tower look like from this church tower.

Panning a little bit to the left, you can see another very, very old tower.   This city’s full of ’em. 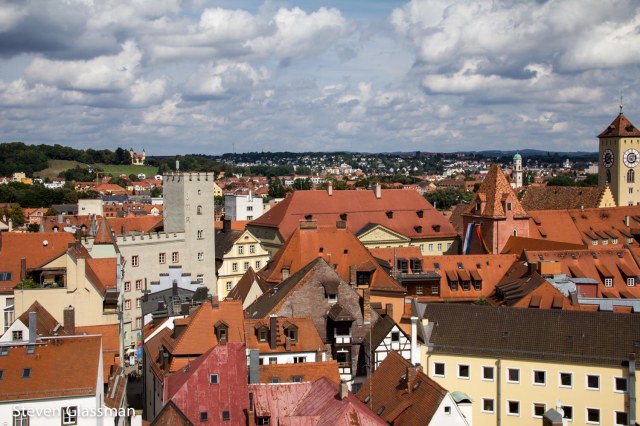 On my walk to the next touristy location in my day, I stumbled across some furries having a date.  At least I think that’s what was going on here.

For my last stop of the day, I went to the Regensburg Historisches Museum, for an admission price of five Euros.  The last time I was there was the first full day I was in this city, back on November 13, 2011.  At the time, I knew absolutely no German at all, so I was completely lost.  It turns out that even with some knowledge of the language under my belt, the museum didn’t seem all that different to me.

I did remember seeing the Jewish headstones before.  There have been several Jewish settlements over the centuries in this city, and most of them have been forced out or simply eradicated.  Some of the old headstones survived and were brought to the museum. 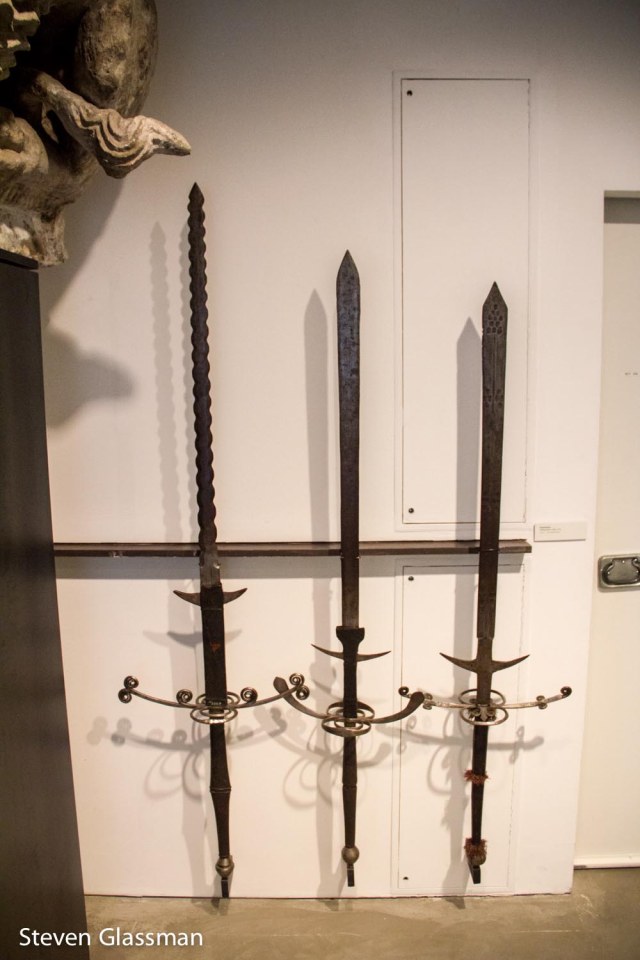 I said before that museums love their models, and this is another fine example of that.

Here’s what I spent on my tourism day, not including food:

Have you ever been a tourist in your own town?  What did you see?