I haven’t taken the dslr out for a spin since I got back to the United States, but I do carry a good camera everywhere I go, in the form of my phone.   I snap pictures all the time, at all kinds of things, because I still have a tourist mentality even though I live here.  I’m not sure whether that’s good or bad, but it does allow me to write up a post showing you some of the things that are a regular part of my life back in Florida.

I spend an enormous amount of time on Interstate 95, the large North-South highway corridor that goes all the way up the Eastern seaboard of the US.   The place where I live and the place where I work are both relatively 95-adjacent.   That being said, I despise I-95.  It’s always full of people who don’t know how to drive.  I often wind up in stop-and-go traffic because a car is pulled off to the side of the road and everyone passing by feels that it’s their moral imperative to investigate thoroughly what the reason is for the blockage, even though it doesn’t actually block traffic even a little bit.

Oh, and those famous blue skies of Bavaria?  They’ve got nothing on South Florida on a cool day.  (Cool is relative; we just had a “cold snap” and it’s down to 75F.  That’s 23C for my German friends.) 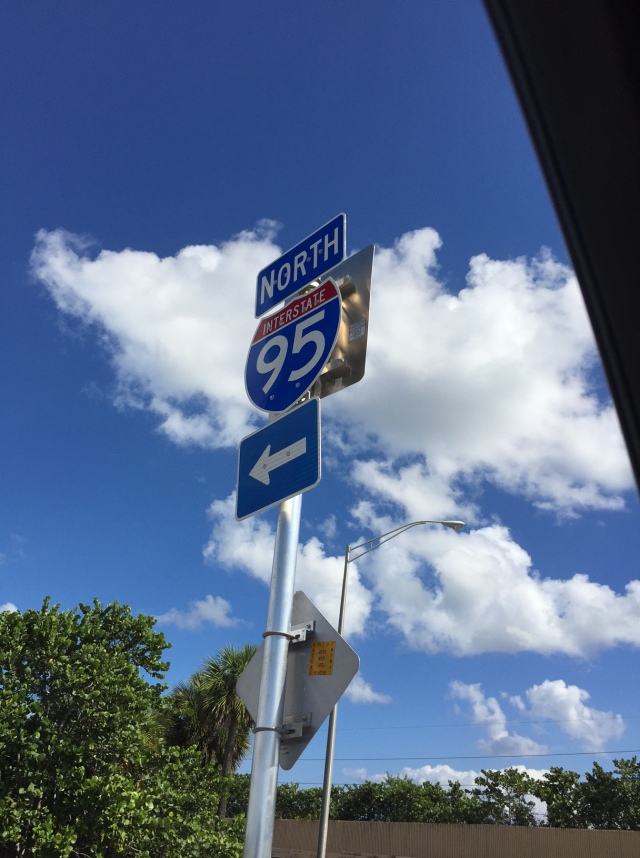 South Florida is a pretty wealthy area, so it’s not uncommon to see luxury cars like this Ferrari.    I see Ferraris, Lamborghinis, and Teslas on a regular basis.  Also, Boca Raton (where I work) is just lousy with Maseratis since I got back.  I’ve seen more Maseratis in traffic in the past month than I would have thought possible.

I went to Target to get a birthday card and I was again presented with the incredible amount of choice that shopping in the US gives you.   This picture is as much as I could fit into frame of the four whole aisles of greeting cards.

With that variety comes the godawful marketing that America is famous for.  From right to left here are Halloween cards, Thanksgiving cards, and Christmas cards.  It’s only October, so the Christmas card section is still quite small.

Not so in the Walgrees, however, where they have given up entirely on the illusion of waiting to put up Christmas and just basically said, “fuck it, we’re gonna throw Christmas stuff right across from the Halloween stuff because people will buy it.”

I’ve worked at Mr. Company for more than twelve years. (I always refer to my employer as Mr. Company; I rarely talk about them because that’s not what this blog is about.) I’ve been with the company so long that I still remember when this sign was put up, and when it actually contained a message about not smoking.  That sun bleaching doesn’t happen overnight, but it’s left a comical tiny blank sign in front of the building that always makes me giggle.

There’s a running joke that my office is just like every first-person-shooter video game ever made.  You can see why.

I work at a company with a server room.  (Lots of my friends have no idea what I actually do, Barney Stinson-style.  Please.) This isn’t important to know, but I thought this was kind of a cool picture.

One of the restaurants here that I missed the most during my time in Germany is Tijuana Flats.    They always have interesting wall art, and they always have delicious food.  I love Taco Tuesdays so much that I had the first Taco Tuesday after my return to the US marked on the calendar six months before I actually got back.

Tijuana Flats has a pretty awesome hot sauce bar, if you’re into that sort of thing.

If Tex-Mex isn’t your speed, there’s always another burger joint in the US.  Since I left Regensburg, I’ve learned of at least three new burger places that weren’t in Florida before I moved to Germany.  And one that opened in Regensburg after I left.  As of this weekend, I have been to Shake Shack for the first time.  The burger wasn’t the best burger I’ve ever had, but it was damn tasty.  The shake, on the other hand, was unqualified bliss.  It was crack in a cup.

Of course Amelie has been talking up Shake Shack for months.  It was everything she said, made better by being able to try it for the first time with her.

Which do you prefer, burgers or tacos?  Do you hot sauce?

7 thoughts on “Around Town”