The weekend before Thanksgiving was a most eventful one for me.  I spent most of the day on Saturday at the car dealership with my brother, going through the motions of the dance that is car salesmanship.   After nearly four hours, a deal was struck for a car which had to be retrieved from another dealership.  We confirmed the theoretical arrival date was sometime Monday or Tuesday, and I went on my way.

That night, Amelie and I went to the Mardi Gras Casino to see Air Supply play a live show.  They basically played their greatest hits album, but they sounded fantastic.

After the concert, there were delicious pancakes and eggs at the local IHOP restaurant.  I really missed IHOP in Germany. Check out Amelie’s pancakes- they look pretty happy they’re about to get eaten, don’t they?

Cut to Sunday, and I got a call from the sales manager that my car was already here, minus the tint (which will be installed in a week or so) and the backup sensor, which will probably be installed after thanksgiving. The car has a backup camera, but I wanted the doo-dad that beeps when you’re approaching an object too.

For the first time since 2011, I own a car.  It feels damn good to get that purchase ticked off of my repatriation to-do list.  This is what I looked like right after I drove the car off the lot.  The car is a Mazda 3 hatchback in a nice light blue color, and I’m very very pleased.

To cap off the weekend, we quite literally rode off into the sunset.  Ok, so we actually drove away from this, but it’s a really pretty sky, don’t you think? 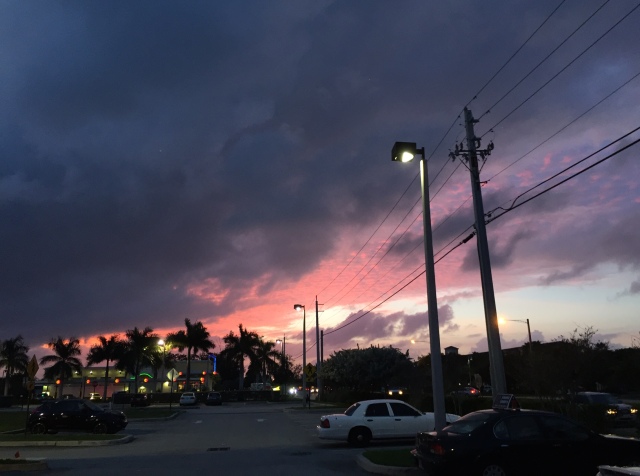 8 thoughts on “`Twas The Weekend Before Thanksgiving…”