It’s been just over five months since I moved back to the US, and the wonderful Itchy Feet comic above is spot on.  I feel like I’m mostly re-acculturated, but there are still things that take me aback.

For example, the Vaping trend is out of control here.  Before I moved back,  I had no idea what Vaping was, but it’s everywhere now.   There are stand-alone stores, and an entire industry has popped up around electronic cigarettes.  The technology has evolved to the point where people are charging their cigarettes with USB ports and changing out modules to reduce the amount of nicotine or flavor their smoke with applewood or whatever.  Some people claim they want to use this to quit smoking altogether, but this seems to me like the opposite of that.  To me, this looks like they’ve simply designed a more efficient nicotine delivery system.

That’s not the only trend that surprised me.  There has also been an exponential growth in the flavored water market.  I’m not talking about the pre-bottled flavored waters that I was used to before I left.  No, this is an entirely new market segment filled with people who simply can’t bear the taste of regular old water.  When I was a child, we had Hawaiian Punch and Crystal Light, and those brands still exist.  But there’s also all of this now:

At least we’ve decided as a people to hydrate properly.

For the first four months I was here, I still shopped for groceries as if I were still living in Germany.  This was partly because I was living with my brother and I didn’t have a full kitchen or pantry to fill, but some of it was simply habit.  I had spent three years shopping with my own canvas bags and only buying as much as I could carry in one go because I would have to walk it back home.   Now that I have a car with a hatchback, my quantity has increased, but I’m still not shopping quite like a person who lives here.  I blame Cheerios for that.

You heard me.  I said I blame Cheerios.

When I left, there were three Cheerios flavors.    There was Honey-Nut Cheerios, Multi-Grain Cheerios, and plain old infants-love-’em plain flavored Cheerios.  Not so, now.  If you look closely in the picture below, you’ll see Multi-Grain with peanut butter.  You’ll see chocolate cheerios.  There’s apple-cinnamon Cheerios and Cheerios with protein added.  In one store, I counted twelve separate varieties of Cheerios.

The breakfast cereal aisle has become the Cheerio-verse.  When did this all become so complicated? 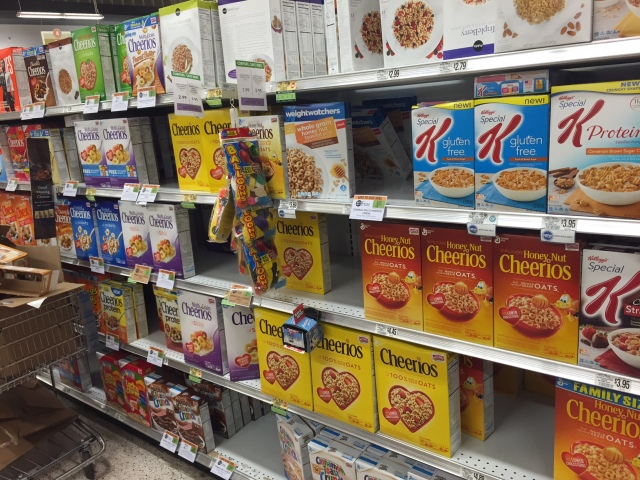 Grocery shopping in the US has always been an exercise in overwhelming choice-  remember when I posted the picture of the peanut butter and jelly aisle?  It’s gone over the top, now.  Even something as simple and ordinary as Matzos suddenly has at least a dozen possible varieties.

I also still feel like I’m boiling inside my skin any time the temperatures crests above 75 degrees Fahrenheit (or 24C,) but that’s a gripe for another post.

What’s your favorite breakfast food?  Is it double-chocolate protein Cheerios?

21 thoughts on “Vaping, Flavored Water, and Too Much Damn Choice”