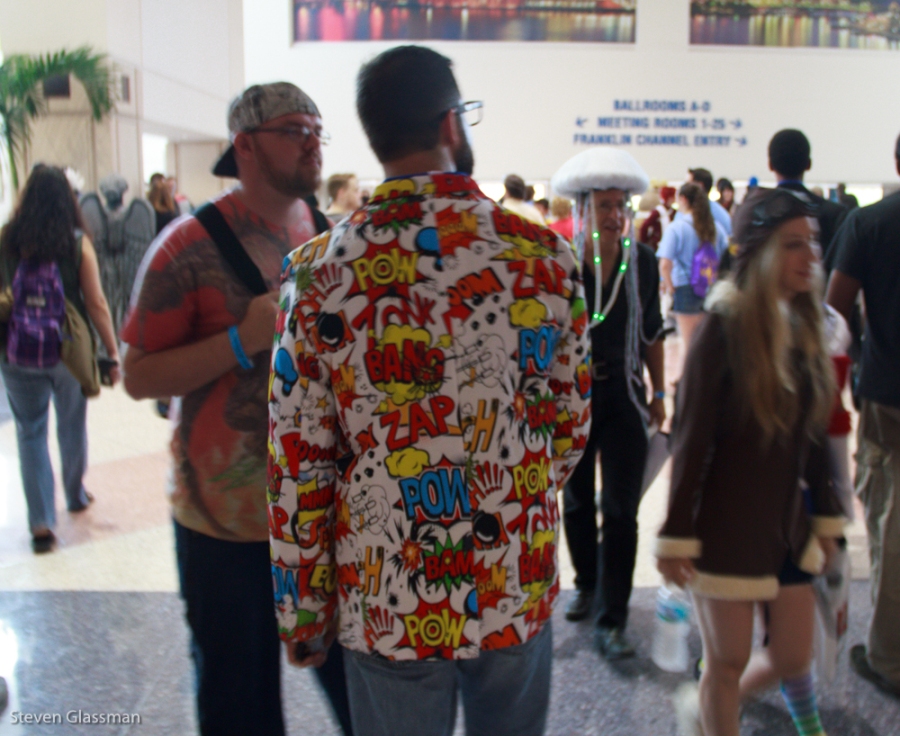 For the last few months, it’s been increasingly more difficult to find the words for the little blank box of blogdom.  The painful truth is that this blog has always been primarily a travel blog, and I’m not really traveling any more.   Once I finish my photo sorting from Japan and I start those posts, I’m out of steam.  I took nearly 2500 photos while I was in Japan, and I foolishly didn’t sort them as I went.  Stupid, stupid Steven.  I’m nearly through them now, but it’s been crazy.

I have about three Minnesota posts to get out, and a dozen or so Japan posts, and then I’m done.  I have no travel planned in the near or distant future.  For me, that’s almost unheard of, but I needed time to re-balance my life and fix the financial burn that traveling like a fiend for the last few years has caused.

The blog needs a retooling, and I’m still not really sure what to do with it.  The people who came here for pretty pictures of faraway places won’t much enjoy me talking about the day to day grind of work-a-day life in South Florida.  If I blogged more like an old LiveJournal and started to talk about things like my terrible sleep habits, South Florida traffic, and regular day to day fluff, would anyone still want to read it?

Other things have been happening which have kept me away from the blogosphere-  On the bad side, things are happening with Mr. Company that make me more than a little uneasy.  On the good side, I’ve been spending oodles of time with my Amelie, and there’s nothing that makes me blog less than having a lot of happy stuff to do away from power outlets and Internet connections.  On the mixed side, my family is splintering again.  After six or eight months being close to all my siblings, my sister has relocated to Orlando for a new job.   Orlando is only a few hours away, but that really makes it difficult to continue our tradition of all four siblings getting together for dinner every few weeks.  This picture from about two weeks ago was the last time that all of us were together:

That’s enough focus on the question of bloggery for right now, because I have lots of entertaining pictures!  The weekend before last, Amelie and I were in Tampa for the Tampa Bay Comic Con.  We just did one soggy day of the three-day event, choosing to visit only on Saturday.    We suited up in the traditional questing garb of our people (translation: geeky t-shirts and jeans) and set out to enjoy the convention. 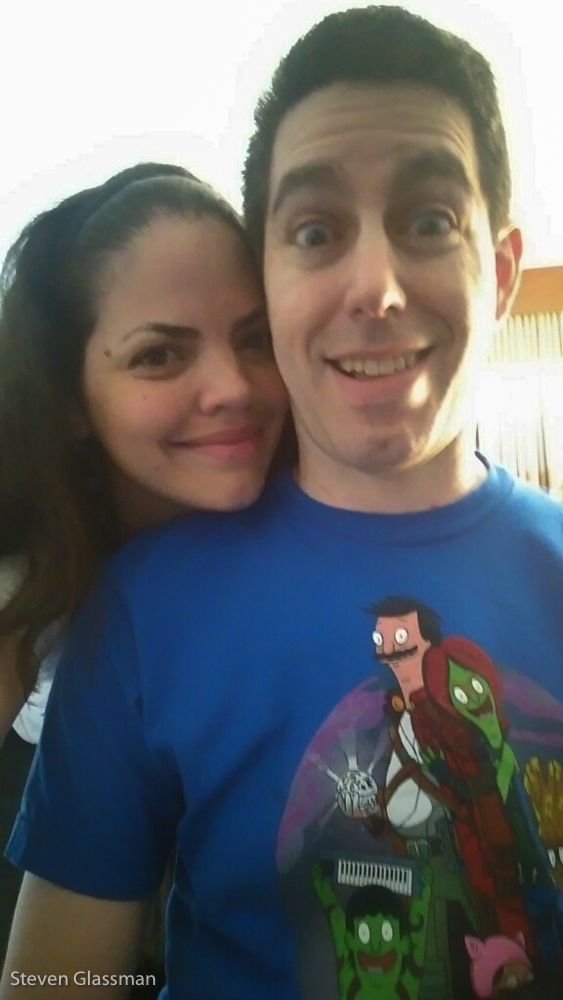 Here’s some of the neat stuff we saw!  On our way in, we saw some great DC comics costumes, but it was a long line of people waiting to get into the building.   As a result, this is more a sneaky candid than a good prepped and posed shot.   I’m not sure whether this chap was Speedy or Red Arrow, but does it really matter? The weather was gorgeous for this part of the day, but it became an incredibly large monsoon-level storm system about an hour after this photo. 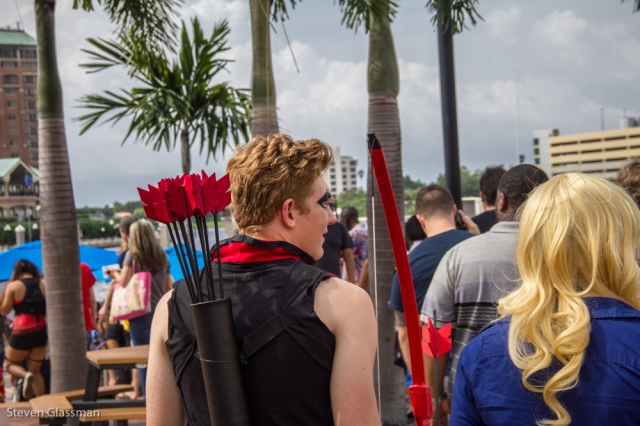 I cannot get away from Frozen.  It’s everywhere.

A very good Cap.  He loses points for using boot shams, though.  For sham, sir, for sham!  A real pair of boots would totally bring the whole costume together!

More DC characters-  Red Arrow, Black Canary, Green Arrow, and The Nefarious Frat Boy.  It’s almost like there’s a hit show on the CW with these characters or something. 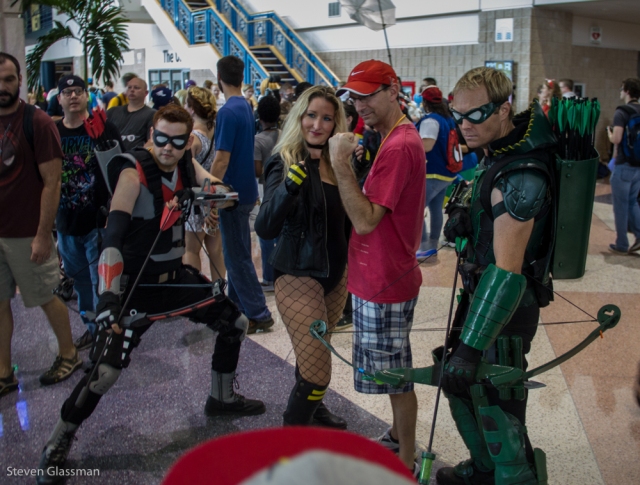 Miles Morales is a good father to his little princess. 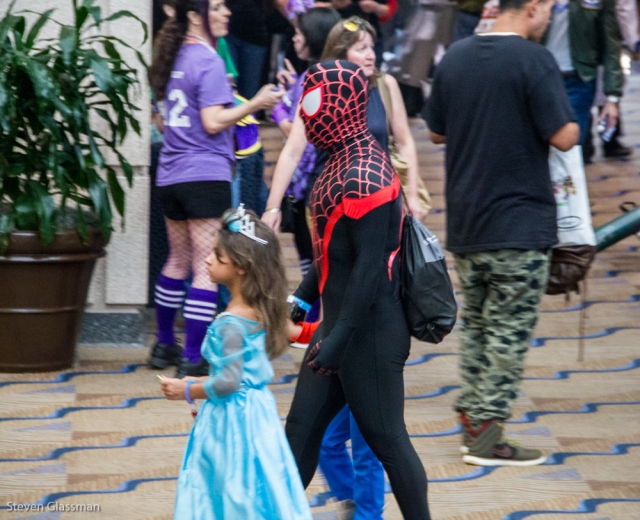 Optimus Prime’s got hairy knees.  This must be his summer look.  Not pictured:  The ridiculous Bermuda shorts visible from the back of the Autobot.  If you’re going to wear a full body costume, would it kill you to wear something that covers your knee-pits? 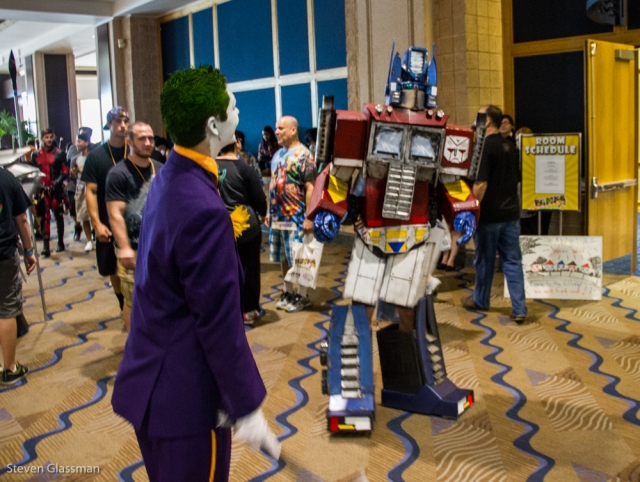 Now this is what conventions are really for:  wizard-on-wizard violence. 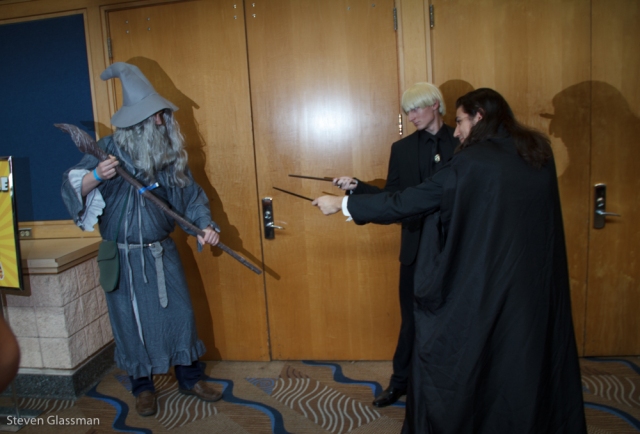 This was the first line-up for Carrie Fisher.  Everyone in this photo was in a very long folding single-file line.

Carrie Fisher’s very short panel was great fun.  Not pictured:  Her little dog that goes everywhere with her now.  Including, apparently, the set of Star Wars: Episode VII. 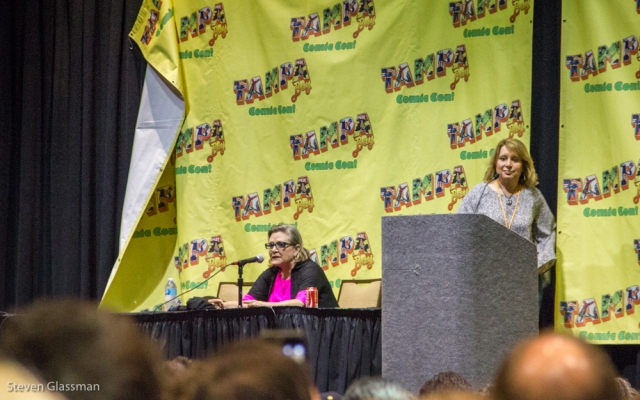 This girl’s Effie Trinket costume was kind of brilliantly done.

The cast of Inside Out:  Sadness, Anger, Fear, Joy, and Homicidal Xenophobic Hatred. 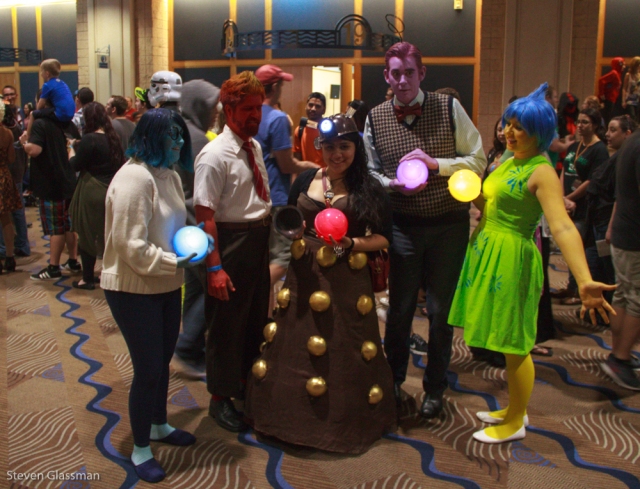 What would happen if the Venom symbiote latched onto Tony Stark?  Something like this, I guess.

Russell from Up!  (Nice detail on the buttons, dude!)

The Freema Agyeman panel was interesting, but not as interesting as Carrie Fisher’s panel.  On the bright side, I finally learned how to pronounce “Freema Agyeman.”  On a side note, the dude at the podium was an insufferable twit who made me want to kick him in the shins. 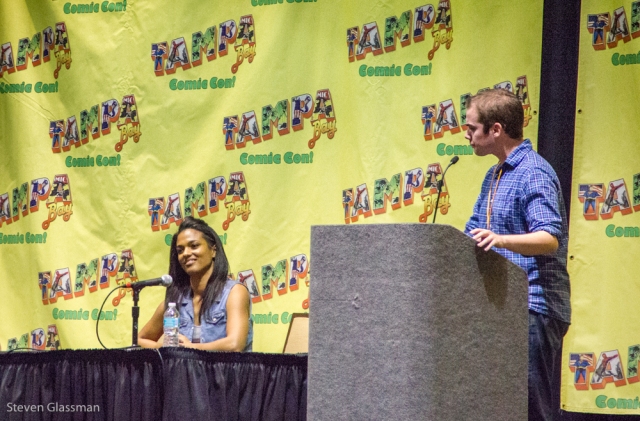 I call this photo “Break room On The Watchtower.” 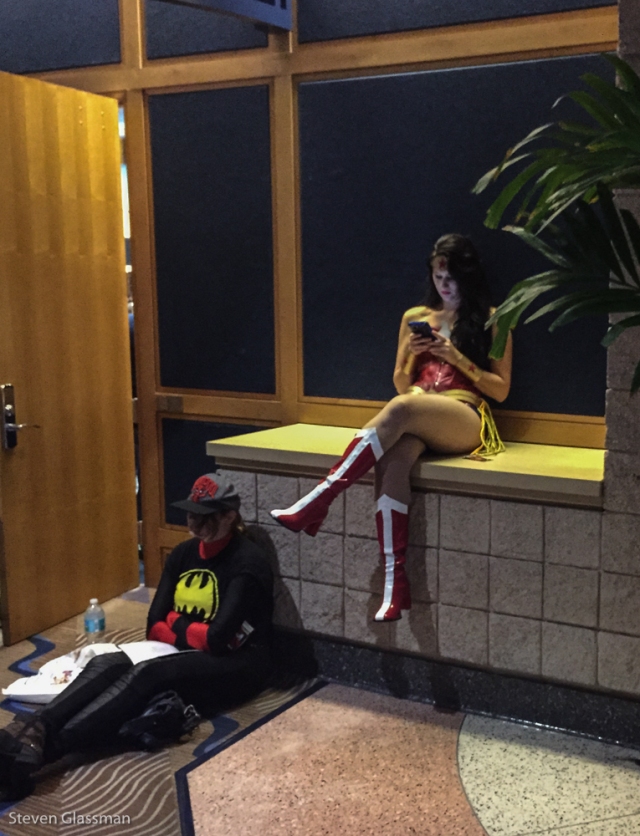 We kept seeing this Avenger couple in lines for various panels.  I’m very impressed with their getup.  Bonus points: not a boot sham in sight!

Every convention has its contingent of bizarre Deadpool costumes, but this one had a Dogpool puppet!  (Yes, Dogpool is a real thing in Marvel continuity.  Really.) 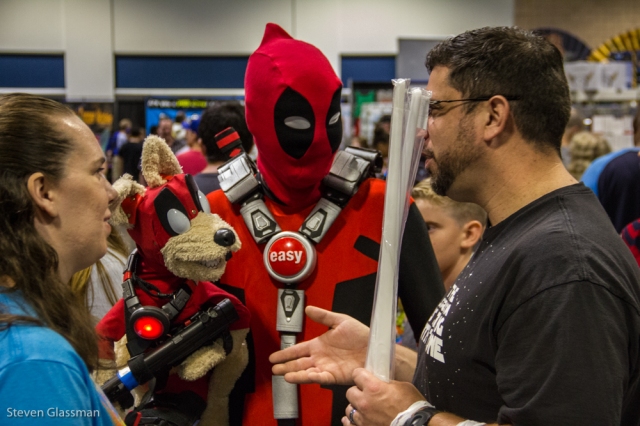 They spook easily, but they’ll soon be back, and in greater numbers. 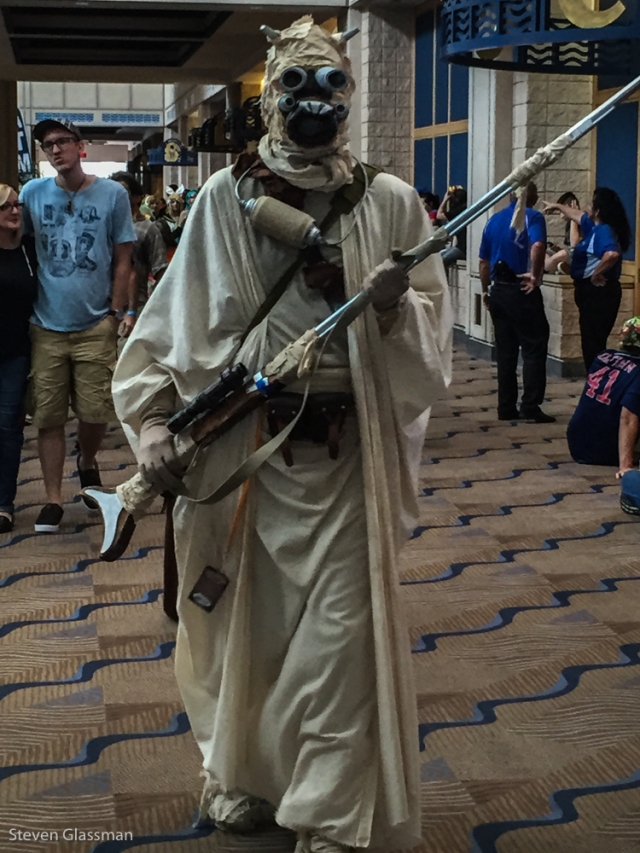 This is one of the most interesting and innovative group costumes I’ve ever seen.  Amelie and I both especially dug these intrepid post-apocalyptic Muppet hunters.

Agent Venom and probably-Scream.   They’re getting a lot of mileage with the original black costume these days

Captain Spider-merica?  Spider-Cap?  American Spider?  Red White And Blue Bug?  What do you even call this mash-up?  (Cool reflective silver eyes, though.  And nice job on the shield.)

There were surprisingly few Harley Quinns at Tampa Bay Comic Con.  Megacon in Orlando was just lousy with ’em.

I didn’t have the good camera with me for the Jena Malone panel. 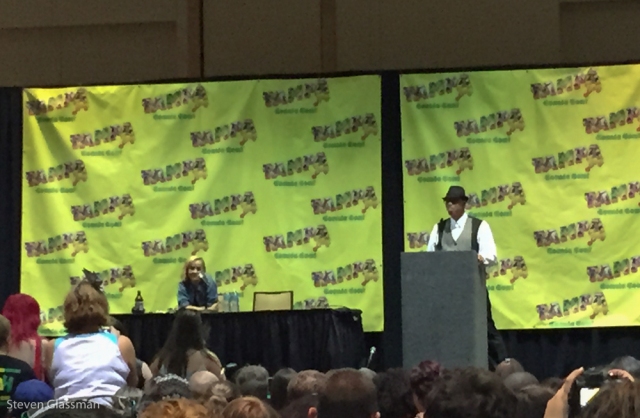 After the day’s geekiness, Amelie and I ate dinner at Columbia House, and then walked around a bit.   We did manage to find the fabled Tampa Bay Lightning.  Shocking! 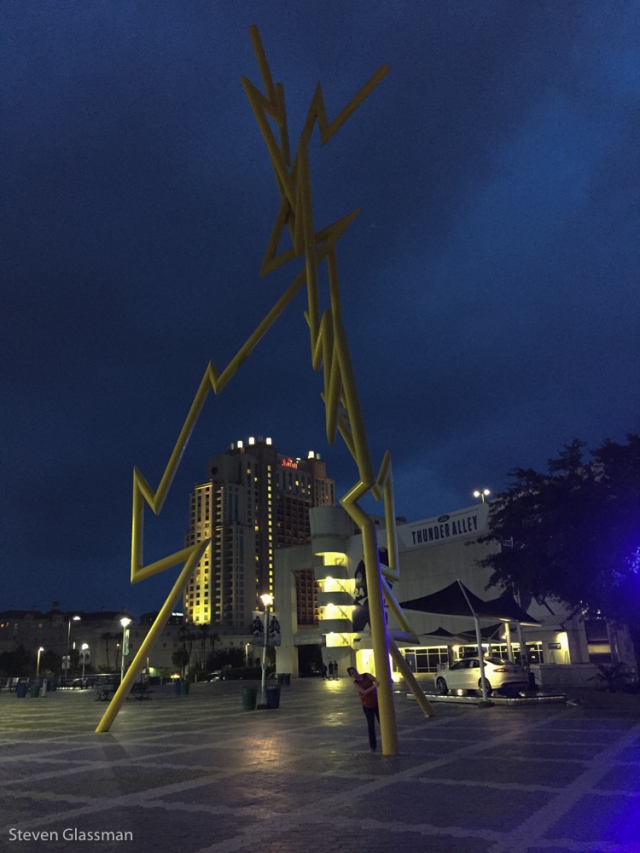 Have you been to a convention recently?  What were your favorite costumes?