On the 16th of May, the first full Saturday after my arrival to Japan, I traveled to Asakusa to see the famed temple Senso-ji.    Founded in the year 645, Senso-ji is Tokyo’s oldest Buddhist temple.  I arrived to Asakusa expecting to find a serene place for contemplation, and stumbled right into the middle of Sanja Matsuri, one of Tokyo’s biggest festivals.   I noticed right away that the streets were blocked off to vehicles, but I didn’t know yet that this was unusual.

I was following the little map robot on my phone, and it told me to walk down this street.  I only got about ten paces in before I turned back to go a less crowded way.   What I didn’t know until later was that this covered walkway is the Nakamise arcade, a popular covered breezeway full of shops and restaurants.

Every street I walked down while in Asakusa was lined in lanterns for the festival.  At this point in the day, I still had no idea what was going on.  Also, I really like this woman’s shark shaped backpack.

As I got closer to the temple, I encountered thicker and thicker crowds.   Of course in a crowd this large, it’s completely appropriate to spot Waldo.

After some walking, I caught my first glimpse of the temple. 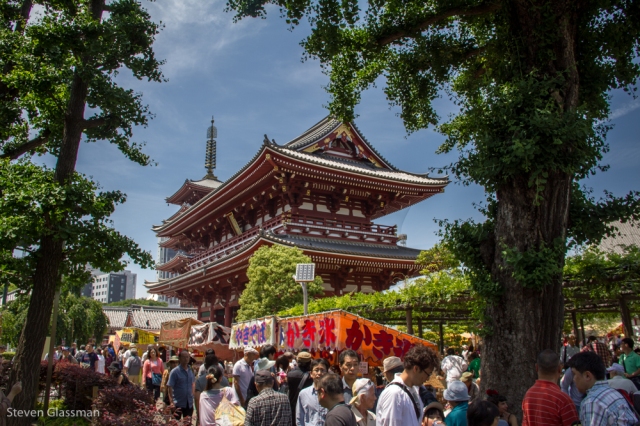 I walked in through Kaminarimon or “Thunder Gate,” and found myself facing statues of Raijin (god of thunder) and Fujin (god of wind).  It is not at all clear to me which is which.   You can see Tokyo Skytree behind the statues here, and I could easily have seen Senso-ji from Skytree, if I had been there on a clear day. 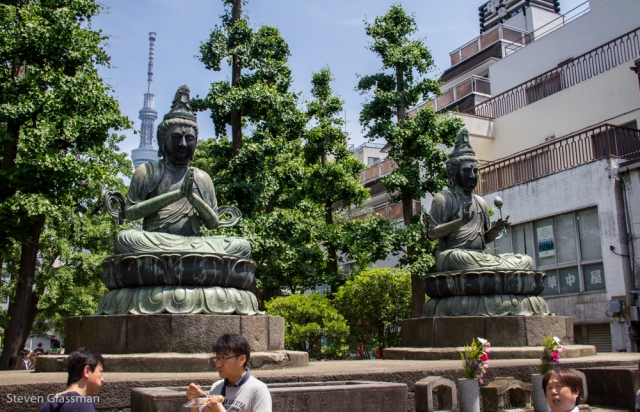 This is the point at which I realized that this might not be normal tourism.   I still didn’t know that it was a major festival, however.

I walked up as close as I could, even making it to the stairs beneath the enormous paper lantern in this photo. 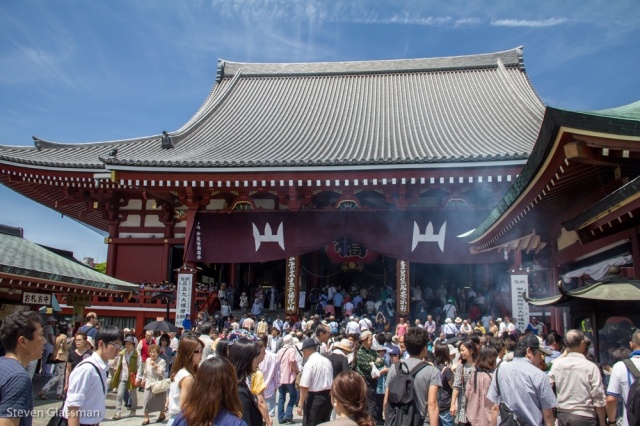 Here’s a closer shot of the paper lantern.

However, the inside of the temple was fenced off with this mesh.  I could look, but I could not enter.  There are several Buddhists inside conducting a ritual, but I don’t know more than that. 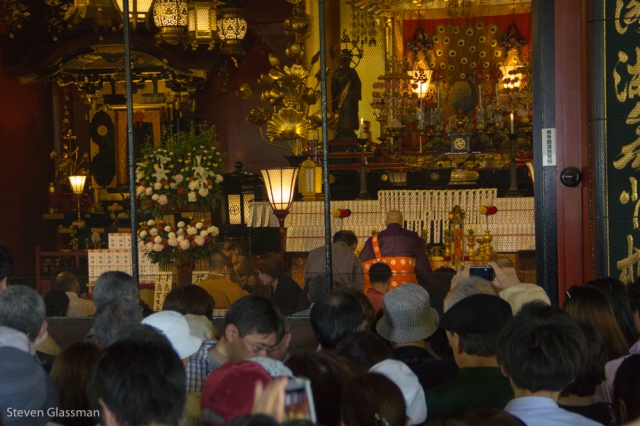 Moving away from the main temple gates, I walked around to the side, where stalls selling merchandse and traditional food rested beneath more paper lanterns.

Walking back down toward Thunder Gate, I noticed another incense burner.  I like the smell of these things, but it was very warm. 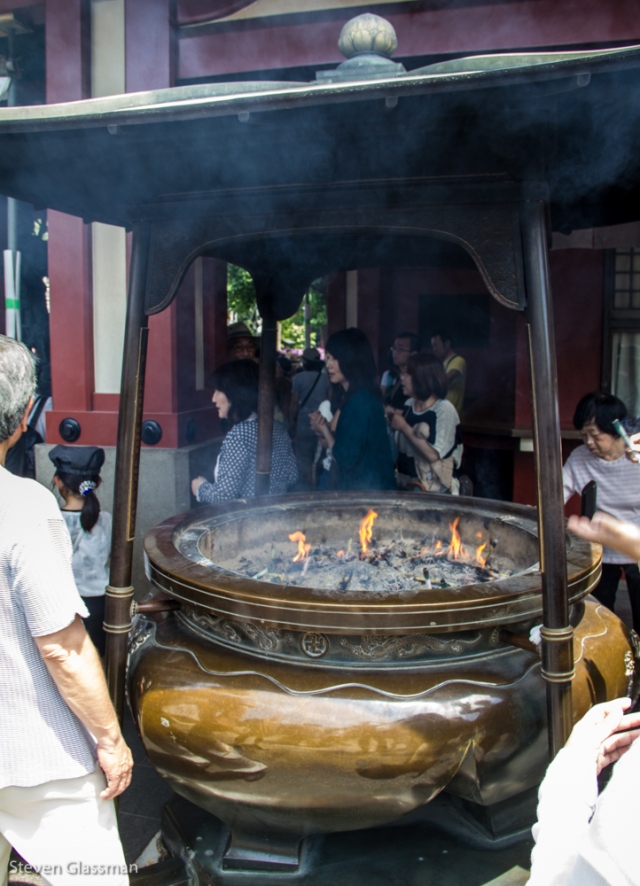 When I walked back toward the train station, I found the main street to be significantly more crowded than when I first arrived.  This is one of the biggest parts of Sanja Matsuri!

The giant metal and wood construct being held up here is called a Mikoshi.   The Mikoshi pictured here is one of three which are built to act as miniature and portable versions of Asakusa Shrine.  They contain representations of Kami, the spirits, gods and deities of Japan’s Shinto religion.

The Mikoshi are tremendously heavy, and they are carried on four long poles lashed together with ropes by a Mikoshi team of about 40 people.  The Mikoshi team has a uniform, with a Happi coat and Tabi boots.  The team bounces it up and down, as a show of strength and teamwork.

Mikoshi are usually carried around the neighborhood so that the Kami inside can see the neighborhood. It’s considered good luck for the area. Afterwards, the Mikoshi is brought back to the shrine.

I watched the Mikoshi for a while, then I grabbed a burger before I headed back to Kanda.  Several of my colleagues who had previously visited Tokyo mentioned that they really enjoyed Mos Burger.  It wasn’t bad, but it definitely wasn’t the best burger I had while I was in Japan. 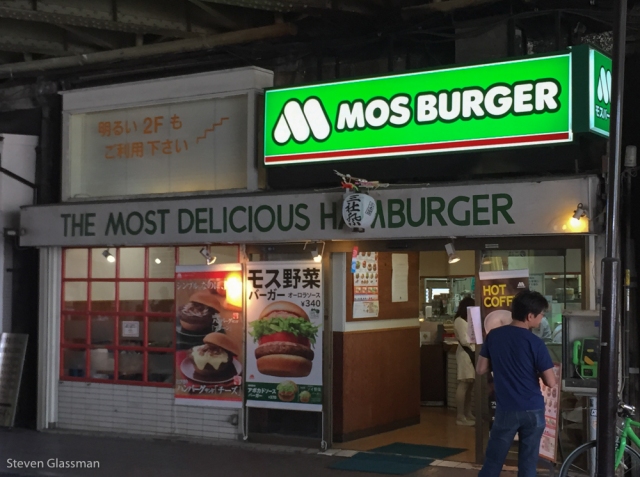 2 thoughts on “Sanja Matsuri at Senso-ji”