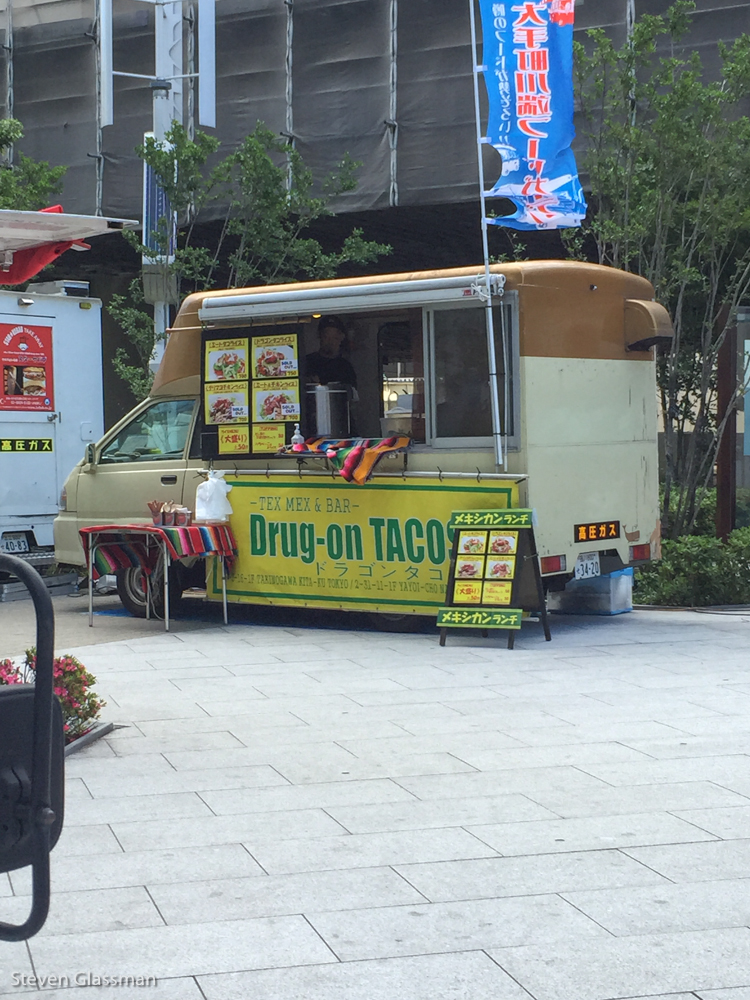 Since I took nearly 2,500 photos during my five weeks in Japan, this is another post full of stuff that doesn’t really fit into my entries about specific places or events.

As a longstanding fan of Engrish, I thoroughly enjoyed a chance to see some wonderfully funny missed translations while I was in Japan.  Tokyo did not disappoint.

This is the very steak!  I regret that I did not have a chance to eat The Very Steak. 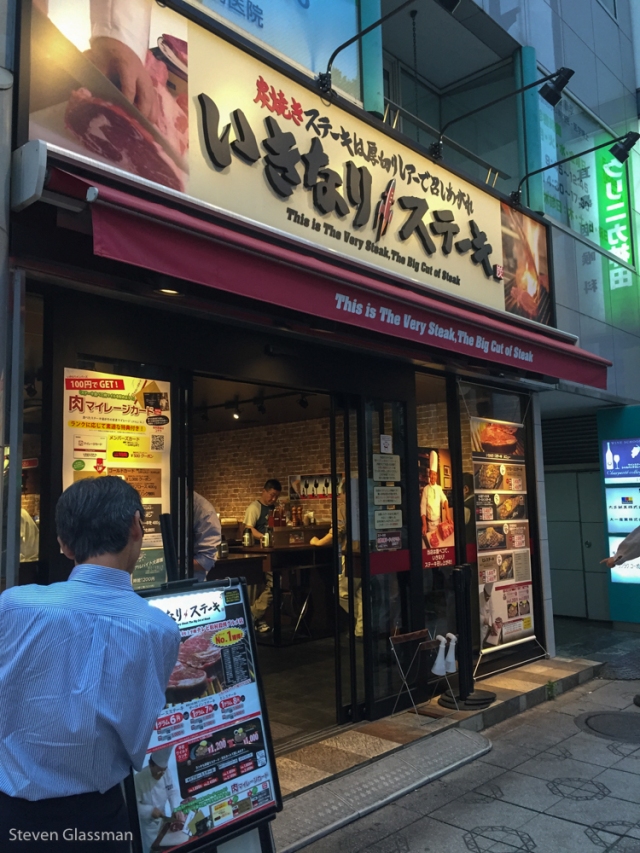 I’m not sure if Meat Potato truly counts as Engrish, but it’s still a funny food descriptor. 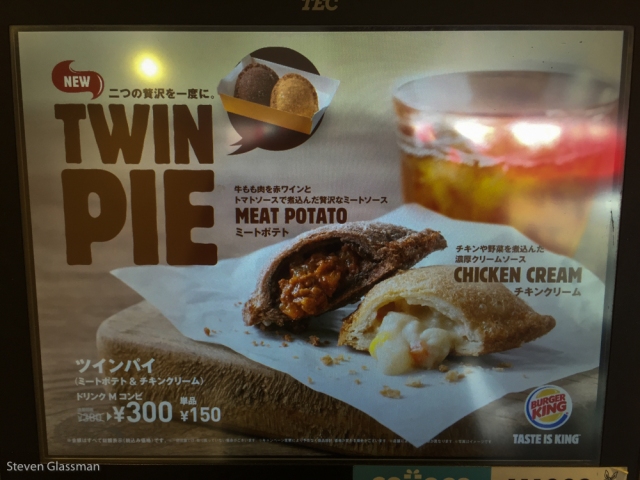 This restaurant in Otemachi was absolutely delicious, but their sign was chock full of poetic Engrish. 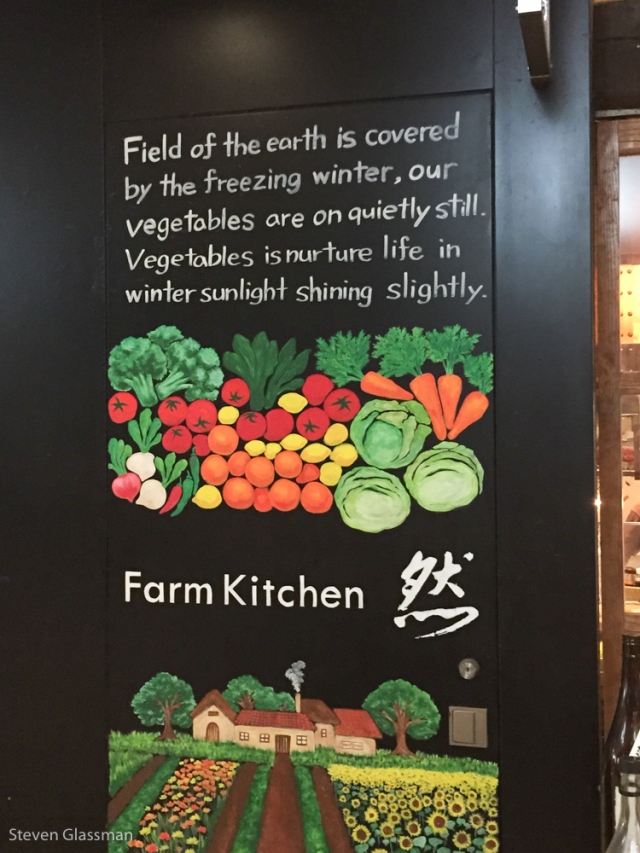 I’ve learned since my departure that Drug-on Taco is actually a fairly popular chain of taco trucks.  Depending on the drug, I can see why that might be the case. 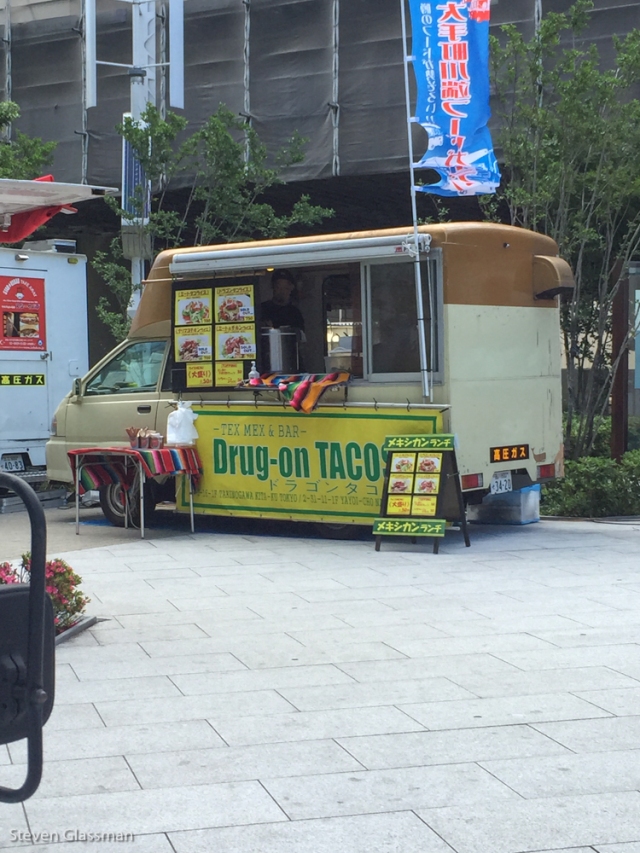 That wraps up my Engrish examples.  Next up in this post is the magic that is the Japanese parking garage.     As you might imagine, space is at a premium in a city as crowded as Tokyo.  It’s no surprise then that the parking solutions here are fascinating and creative.

The first time I walked past one of these bays, I didn’t quite understand what I was looking at. 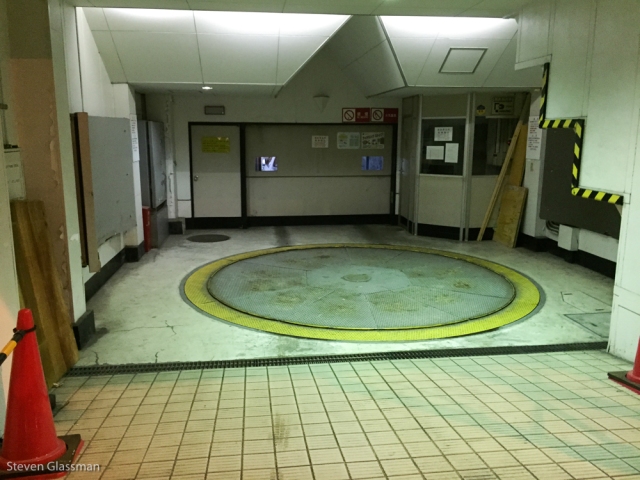 What I learned later was that cars are returned to this front space in reverse, and the large disk is a giant turntable to rotate the cars so that they are facing forward for departure. 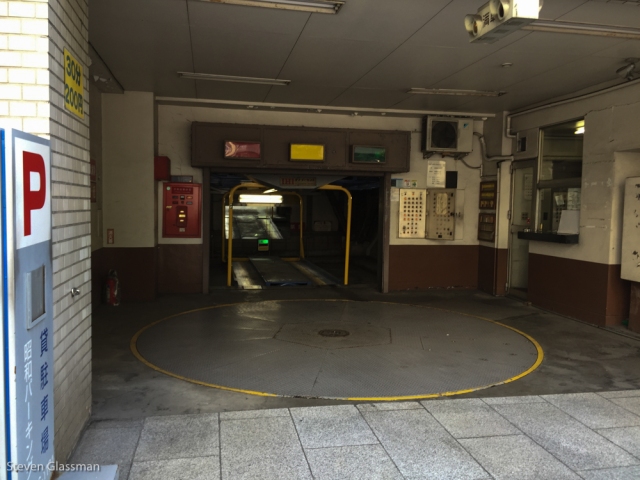 Japan’s focus on safety is omnipresent, so it makes sense that they would not want drivers having to back into city traffic.   I would never get tired of the car turntable, because it reminds me of the way the Batcave always kept the Batmobile facing forward in the movies. 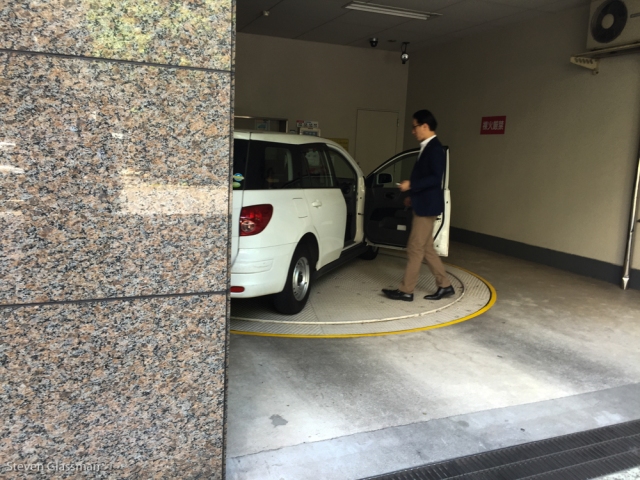 This appears to be the back of the bay shown above.  The cars are kept in vertical racks, and I believe the car retrieval is automated.  I’m not entirely clear on that, however, because I never saw this in operation. 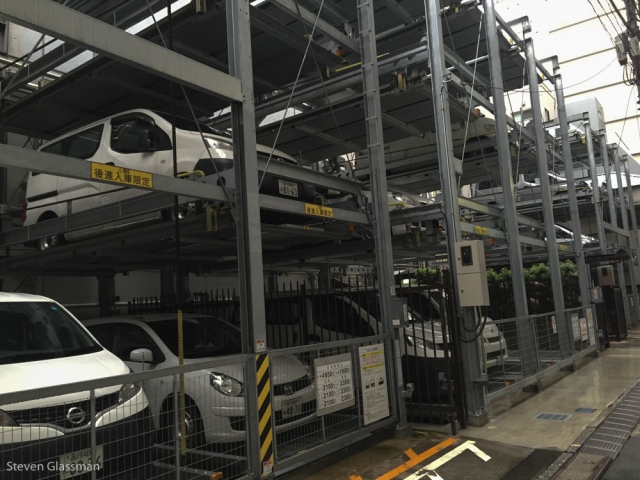 I keep mentioning how Japan is very safety-conscious.  My first exposure to this was the very first time that I went to Akihabara with my colleage.  As we were walking out of the train station, we saw this worker staring at the building across the street. 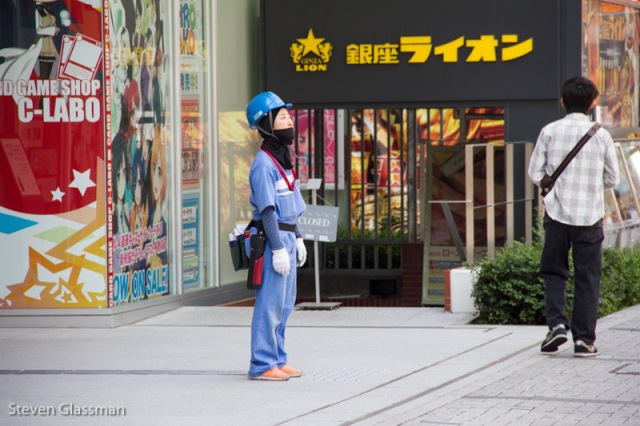 Across from her was a coned off area and signs to direct your attention upward. 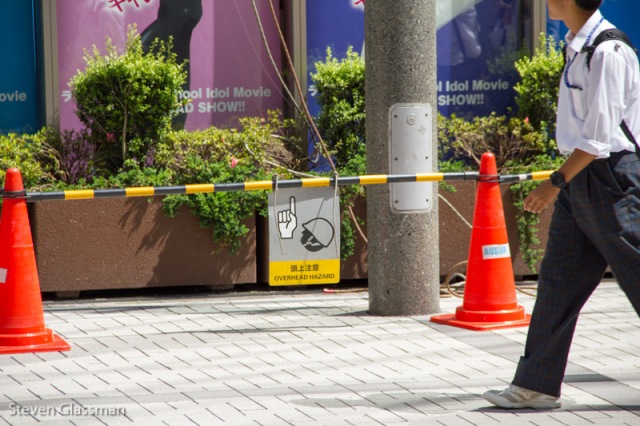 Above that sign, a single worker is washing lots and lots of windows. 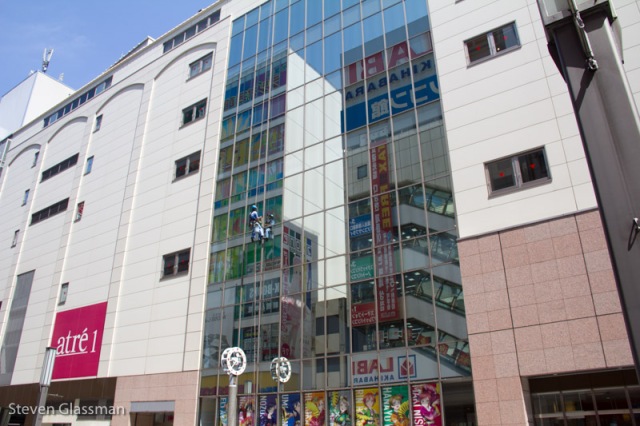 Those with acrophobia or poor balance need not apply. 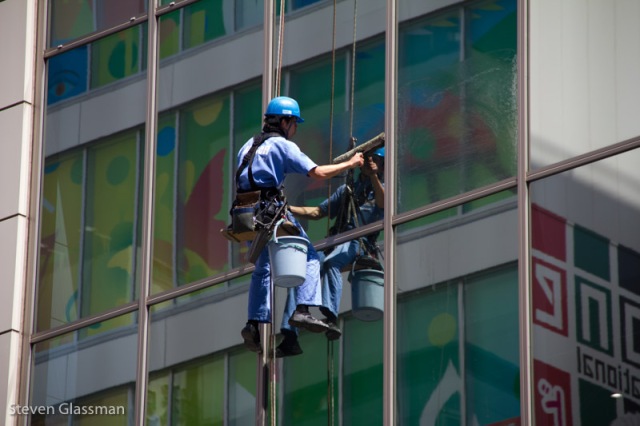 While walking home from the office at night, I would often see road construction being set up for the night.  The crews would dig up tremendous sections of the street and it would all be put back into place by morning.  At night, however, the safety gear came out in force.  The vest lights blinked in alternating patterns. 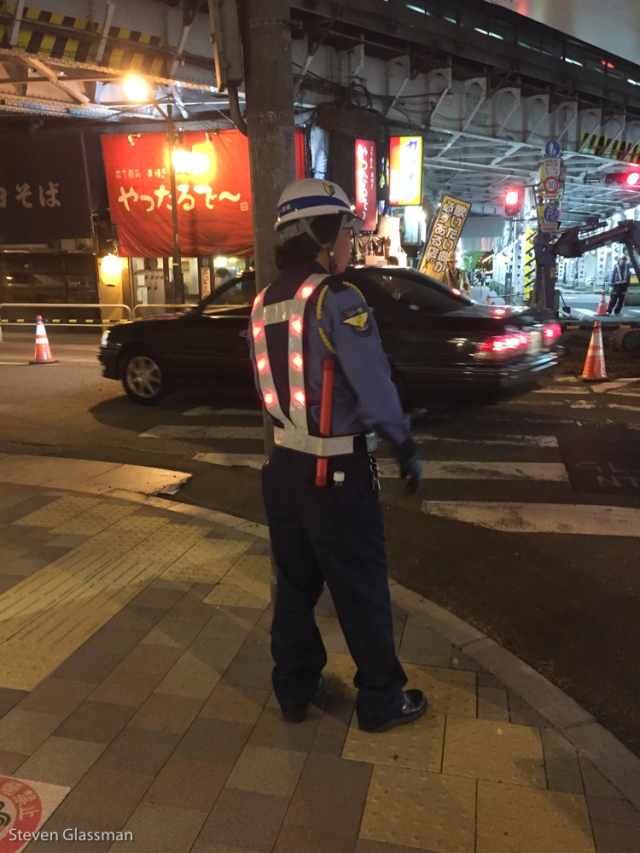 Teams of safety workers would keep traffic moving around the dig site with their blinky vests and glowy flashlights. 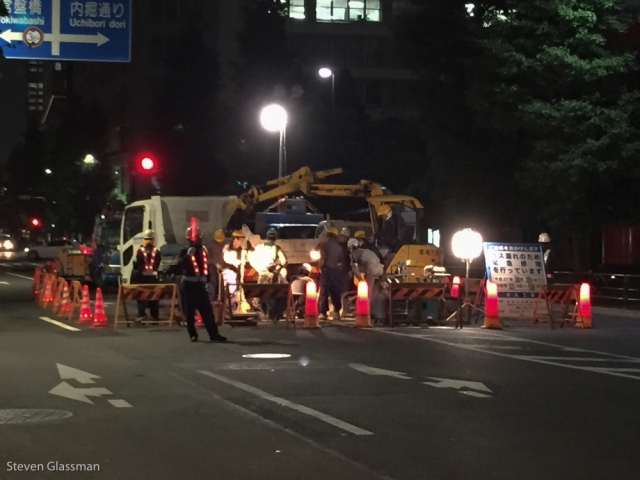 This man’s vest is not off.  It’s just on the off part of the blink cycle at the exact instant that I took the photograph. 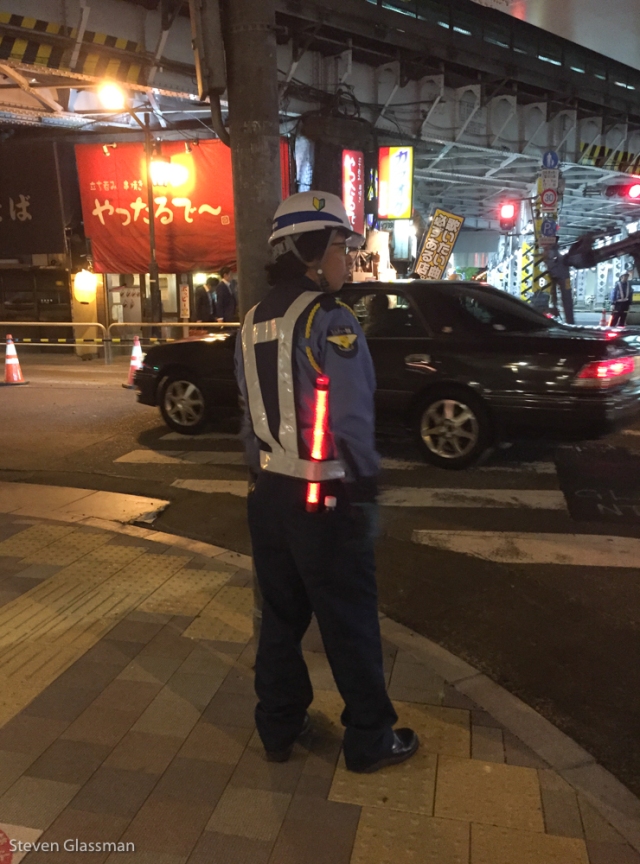 Even the cones glow in the darkness! 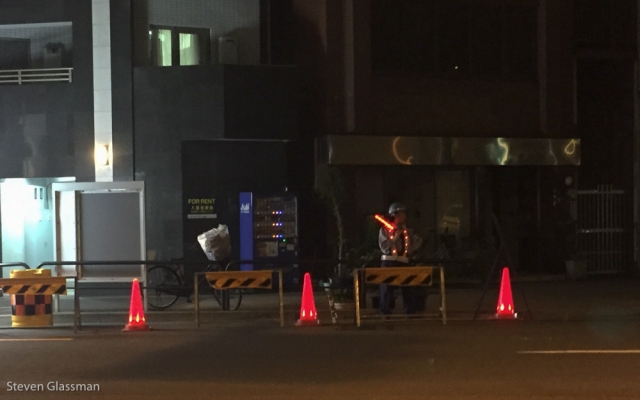 People doing work on the street in Japan often work in teams.  It takes two to ticket this parked vehicle. 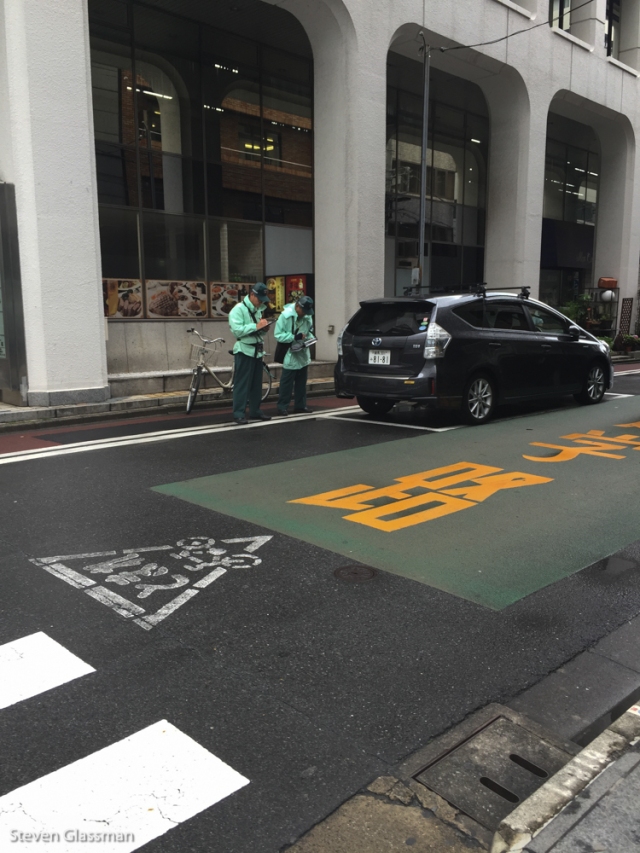 These two are really just there to make sure that you don’t get clobbered by falling debris from this tower.  There are always two! 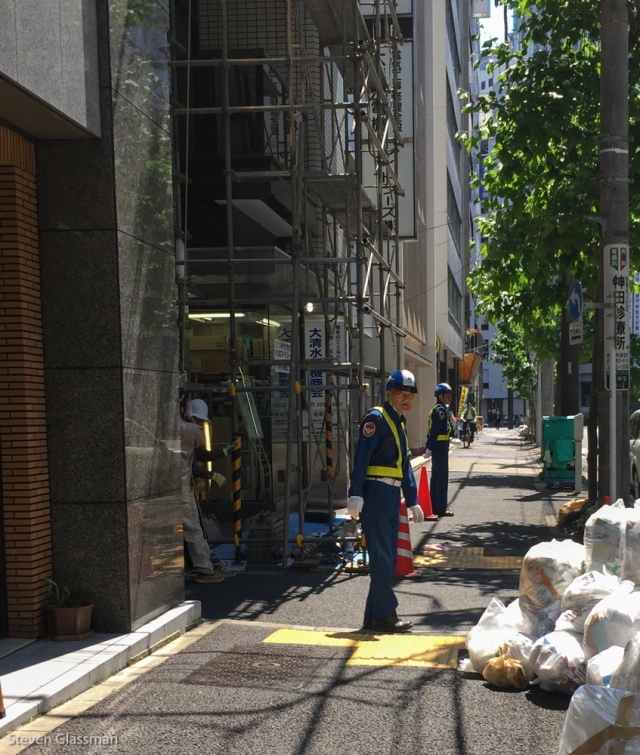 Let’s move on to some sweets.  Japan is full of fascinating flavors.  Some of them are amazing, and some of them are not.  These green matcha tea flavored Oreos were not great.  I was optimistic when I saw the package, but the flavor was just not much fun. 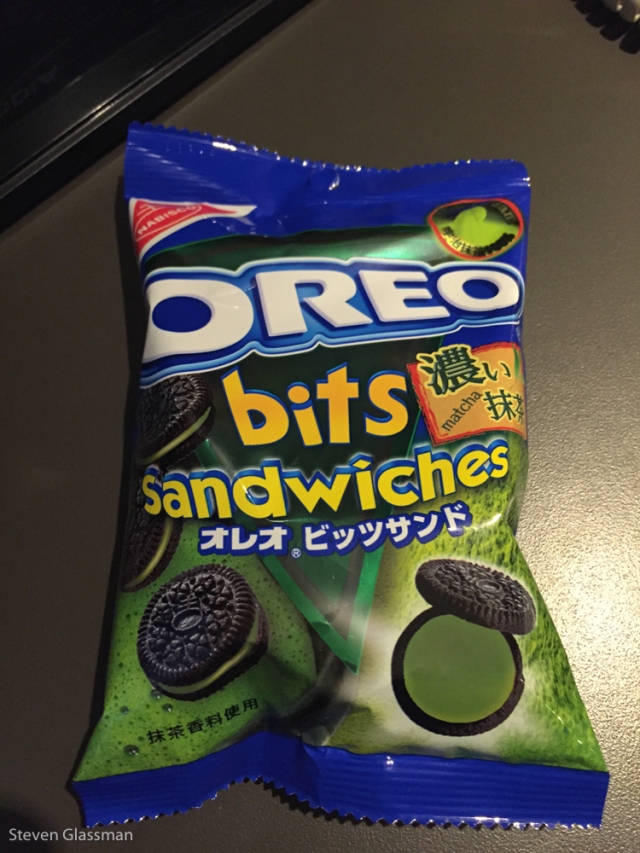 These tiny crunchy balls of chocolate joy were amazing, and I bought packets of them throughout my trip.  The outer shell is crunchy, and the inner part was a sort of creamy fudge. 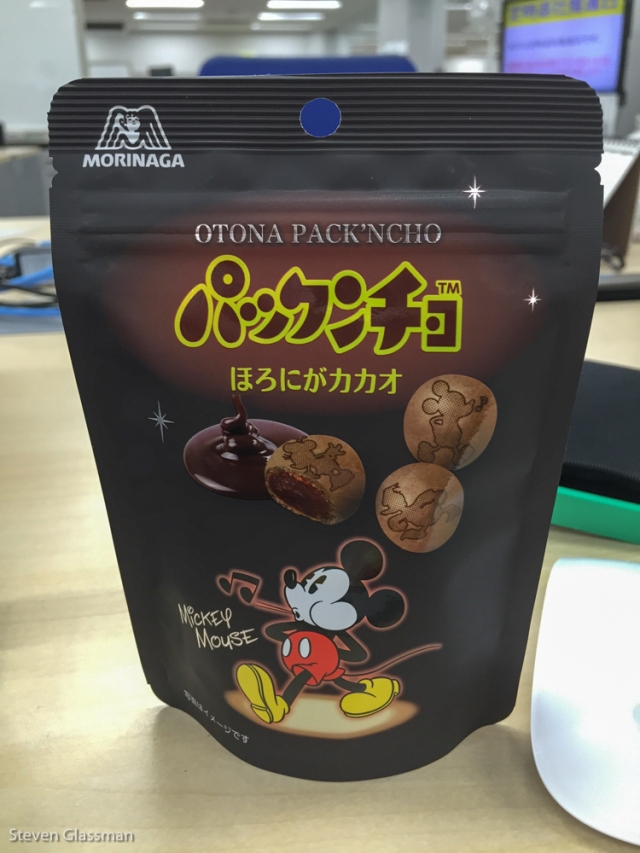 In the mood for ice cream?  7-11 has you covered, with these ingenious cone-shaped containers of single serve. 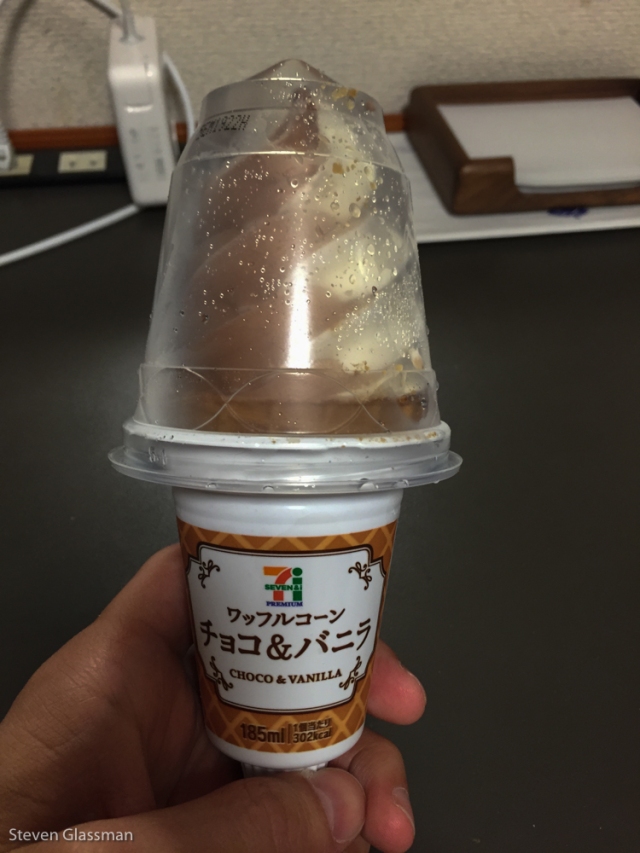 The things on the left?  Too chewy, and I didn’t enjoy them at all. 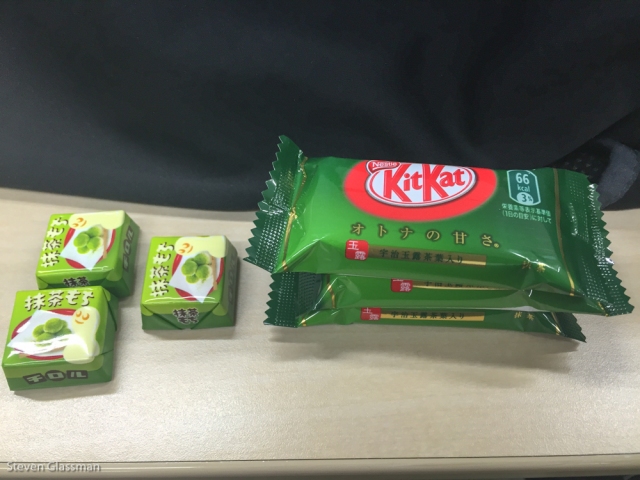 Have you got a good idea for an end-of-post question?  I can’t think of one right now.

3 thoughts on “Because Japan 2: Engrish, Safety, and Sweetness”