Damn it, 2016, knock it off already.  You’ve already taken Alan Rickman, Prince, Abe Vigoda, George Gaynes, Jerry Doyle, Gene Wilder, and David Bowie.  And now I see in the news that you’ve also taken Leonard Cohen from us?  This will not stand!

Leonard Cohen was beloved by many of my friends. I loved him too.   Leonard has been actively writing and performing music for almost sixty years.  Almost everyone knows his work, even if they don’t realize it- he wrote “Hallelujah,” one of the most covered songs ever sung.  Jeff Buckley, Rufus Wainwright, and countless others have done  hundreds of versions of this song, but the original is still the best.  Leonard Cohen originally wrote around 80 verses for the song, and different artists sometimes choose different verses, which means that almost every version is just a little bit different.

My first exposure to Leonard Cohen was in 1990, when I was seventeen years old.  A group of us (including Jade Walker and our good friend Chris Pine, who is now deceased) went to see the Christian Slater movie, “Pump Up The Volume.”  During the movie, Christian Slater’s character spun up “Everybody Knows” and “If It Be Your Will.”  I was transfixed, and I’ve been listening to Leonard Cohen (and the ridiculous number of covers of his work) ever since.  Those first two songs are still among my favorite songs of all time.

A recent Rolling Stone article mentions that when he finished his “Grand Tour” in New Zealand on December 21st, 2013, he had been touring for five years and played 387 shows. He came out of that tour with serious physical problems.  Leonard Cohen had multiple fractures of the spine, and severe mobility problems.   His final album, “You Want It Darker,” was recorded from a makeshift studio in his house.  His son set up a Neumann microphone on the dining room table, and set the living room up with recording gear, a laptop running Protools, and a set of speakers.    Much of that album was recorded with Leonard in an orthopedic medical chair.  “You Want It Darker” was released on October 21st,  just a few weeks before Leonard left us. 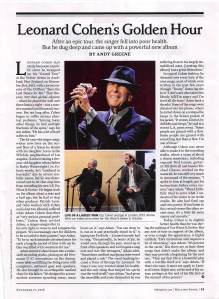 (Editor’s note:  I accidentally acquired a subscription to the Rolling Stone a few months ago.  I’m still not entirely sure how this happened, but every once in a while the magazine is really entertaining.  If you’re interested in reading this fascinating look at the production of Leonard Cohen’s final album, I scanned the page from the November 17, 2016 Rolling Stone.  Here you go.  Click the thumbnail on the right to embiggen.  )

Leonard was 82 when he died, which means he was about 79 at the end of his final tour.  Six months before the Grand Tour ended, I was lucky enough to see him at the SAP Arena in Mannheim, Germany.  I was thrilled to finally be able to see him live, and I had no idea that he was on the last tour of his career.  Even then, in late June of 2013, he was spry and witty and a master of his craft.

Thanks to the wonders of YouTube, I can show you what it was like to see him perform Hallelujah live in Mannheim, Germany, about three and a half years ago.

I’m tired of 2016 taking my musical idols from us.  Someone keep an eye on Cyndi Lauper, Martin Gore, Andy Bell, and Vince Clarke, ok?

*If you’re not familiar, “Dance Me to the End of Love” is one of Leonard Cohen’s songs.  There’s a live version on the 2009 Live in London recording you can get from Amazon and iTunes.

One thought on “Dance Me to the End of Love*”