I never really gave much thought to the place where I was born. I’ve only been there twice. The first time is when I was born, before I went home to the family home in nearby Livingston.

The second time was in 1997, when the entire family went to Jersey for our cousin’s wedding. During that trip, my brother and I took the rental car for a brief day-trip to check the place out. I was a little curious about my birthplace: Morristown, New Jersey.

While we were there, we walked around the downtown area a little bit, walked by the hospital where I was born, and also walked through a park in the center of the town. Unbeknownst to me, the Morristown National Historical Park is the site of General George Washington’s encampment from December 1779 to June 1780, and there’s a Washington museum on site. 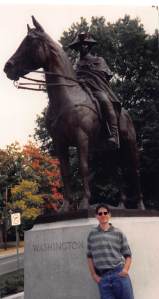 The picture to the right is of Jonathan standing in front of the equestrian statue of General Washington.  This was the first moment that I had any inkling that my birthplace is interesting on its own, and since then I’ve found out a few other neat facts about the town.

Does your birthplace have any interesting history?