Up until the middle of this month, I’d never set foot in Los Angeles, not counting layovers.   When I found out a few months back that Bob’s Burgers was doing a live show, I could not resist.  I bought tickets right away.  The first night sold out and they added a second night, but we didn’t need to go twice even though I’m sure it was just as awesome on the second night.

The show was on Saturday evening.  We flew in Thursday night and out Monday morning, so that gave us a full three days to explore sunny California.  We covered Hollywood, Long Beach, and various points in between.  I took 810 photographs in three days, and distilled them down to 121 for the blog.   102 of the photos were from the Walk of Fame, but those stars are really all kind of the same, so I’m only going to post one of ’em.  There were 118 photos at Madame Tussaud’s, because that place is just fun, but that’ll be one whole post with about seventeen selected pictures.   Nobody needs to see every photo I take.

I’m not going to put all 121 of the finally chosen photos in one post though, that’s just nuts.  I’ll break it up a bit.  This is the first of many California posts.  I’m gonna start with the show that initiated our trip to California, Bob’s Burgers Live at the Orpheum Theatre in downtown Los Angeles.

The Orpheum is a lovely old theater 2000 seat theater.  It was originally opened February 15, 1926, and was reuilt in 1989.  It has a “Mighty Wurlitzer” pipe organ installed, one of the last three pipe organs in Southern California venues.  I wish I’d heard it while we were there. I bet that thing sounds cool.  I also just learned that Taylor Swift filmed her video for “Mean” at the Orpheum.  Neat!

We were there for Bob’s Burgers, and that’s what we saw!  Each of the primary cast members is a comedian on their own, so the first half of the show was a series of comedy routines from the cast members.  The second half of the show was where it got really good though-  they did music from the show, along with Matt Berninger and the National. (Bonus!  Now I’ve seen the National in concert!)

All of the primary cast members were present for this gig.  The next picture is Eugene Mirman (Gene), Kristen Schaal (Louise), and Dan Mintz (Tina) singing “The Fart Song!”

Eugene did Gene’s masterpiece, “The Snake Song.”  I’m so happy they did this one.  In the left part of the photo, you can see the giant puppet snake that wound its way through the theater during this song.

Here’s the short version of The Snake Song, for your enjoyment:

On this next photo, sisters Louise (Kristen Schaal) and Tina (Dan Mintz) sang “Bad Girls.”  I love the keyboardist from the National to their left.  He was having a great time for the entire night.

Near the end of the show, there was a giant puppet Tina and a giant puppet for “Electric Love.”  Alas, no Kevin Kline or Megan Mulally were present to do their parts.  That would have been quite nifty! 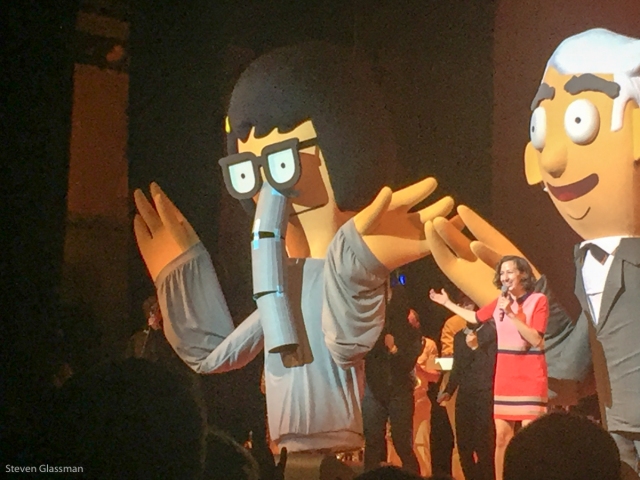 This was the finale, though, with the entire cast on stage.  From left to right:  H. Jon Benjamin (Bob Belcher) in the yellow and blue shirt to the left, Larry Murphy (Teddy) in the suit, Dan Mintz (Tina), Eugene Mirman (Gene), Kristen Schaal (Louise), John Roberts (Linda Belcher) in the white t-shirt, and Matt Berninger from the National in the red suit.  Not visible in the photo, but sitting in with the National, was Loren Bouchard, the creator of the show.

The merchandise line at this show was run by a bunch of people who severely underestimated demand for their wares, and it took a long time to get out of the theater.  By the time we left, I had a new t-shirt or two, and Amelie had some official Louise ears.   Success!

2 thoughts on “Bob’s Burgers Live, and the Los Angeles Intro.”