I’m pretty sure that nobody else is going to be even remotely interested in this post, but I’m trying this new thing where I actually put stuff in my blog more than once every two months, so I’m talking about whatever random weird thing is on my mind.  Right now, that thing is t-shirts.

I wear a lot of t-shirts. I always have. While going through my old LiveJournal, I found a post from ten years ago in which I was thinking about my t-shirt collection.

This made me curious.  I know that the predominant color in my wardrobe was black for a long time, but it’s been ten years since that last count.  I’ve mellowed a bit, and I’m less interested in wearing all black all the time.  Naturally, I was curious to see how the colors had shifted in the last ten years.  To sate my curiosity, I waited for laundry day.  Once everything was clean and hung up, I took a new census.

The result?  I’ve got less than half the white shirts that I had ten years ago, and less than half the black shirts as well.  Almost every other color has a bigger part in my wardrobe than what 34 year old Steven would have worn.  Except that one purple shirt.  I haven’t seen that thing in at least a decade.  Truth be told, I’m pretty astonished even now that I had eighteen white t-shirts back then.

I am very fond of blue shirts, apparently.

Another thing which is interesting to me, but probably not to anyone else:  In 2007, I had 69 short sleeved shirts and seven long sleeved.  Now I have 57 short sleeved, and four long sleeved.  I feel like I have way more shirts than I did before, even though it’s actually a smaller number.  I wonder why that is.

I’ve also changed my shirt-keeping system over the years-  I kept the shirts folded in a drawer (or, more accurately, a couple of drawers) for years, but Amelie has converted me to the ways of fuzzy hangers.  It’s a lot easier to see ’em all now.

This leads to a fun little aside-  in order to better randomize my shirt-wearing,  I play a little game with Amelie. I count off the shirts from front to center and back to center, and then decide which side will be “heads” and which will be “tails.  Next, I  ask Amelie to choose heads or tails and a number which varies depending on how many shirts are in the laundry hamper already.  It’s usually around 20-23, though.

Much like the shuffle player on iTunes, this “random selection” tends to bring up certain things more frequently than others.    I suspect that probability is warped where funny t-shirts are concerned. 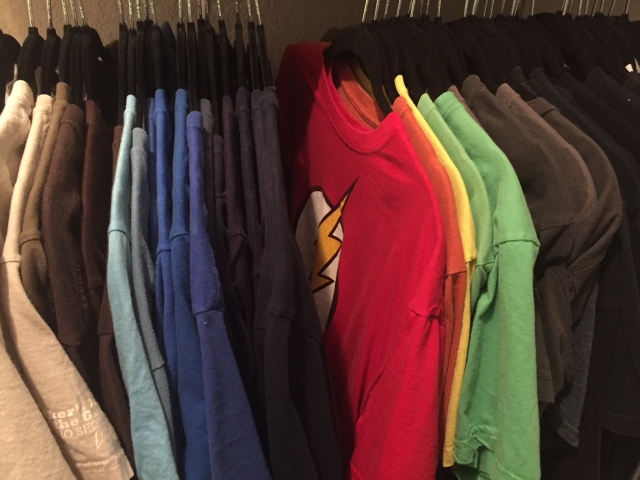 What color is your favorite t-shirt?