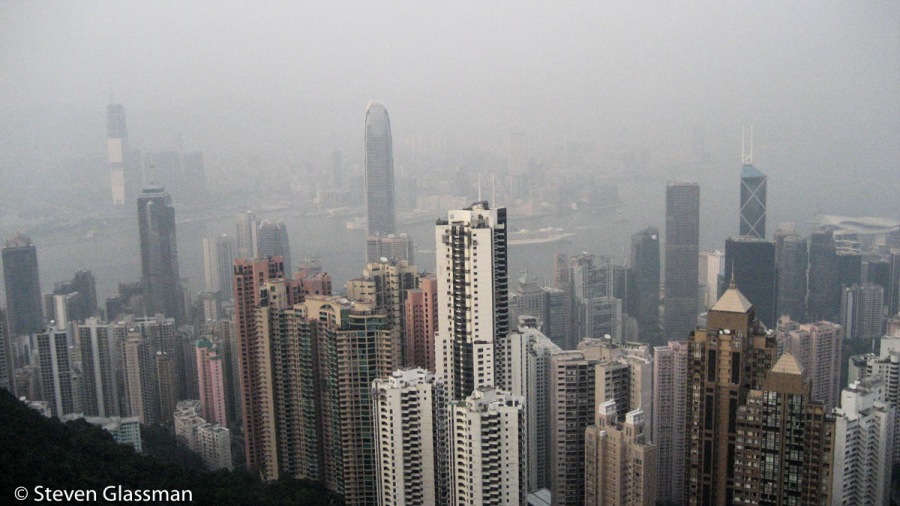 Author’s Note: This is one of five posts looking to the past, to my trip to Hong Kong in September of 2008. Some of the details may be a little fuzzy because it was twelve years ago.

The Peak Tram is a funicular that’s been running since 1888. It connects the lower parts of Hong Kong Island with the upper bits. We took it up to Victoria Peak.

I am delighted by Funiculars. They usually cover a very short physical distance, but their charm is in their verticality. The Peak Tram travels less than a mile, but it climbs over 1300 feet in that distance.

At the top, there’s an observation deck called Sky Terrace. Of course, I had to go see Victoria Peak from the top. It’s tall, and I love tall things. We have established this as a BlogFact™. It’s a shame it was so hazy that day.

This Japanese restaurant at the top of Victoria Peak was the single most expensive meal I ate on the entire trip. This is where I had Fugu and a Kobe beef hamburger. A quick side note: I did a bunch of reading on this, and while Fugu neurotoxins are a painful and slow way to die, Fugu fatalities are not really all that common and most people with the bad luck to get an improperly prepared fish do recover.

After dinner, we took a taxi back down to the foot of the mountain, and then took the Star Ferry back to Tsim Sha Tsui.

Like the Peak Tram, the Star Ferry was first established in 1888. It goes across Victoria Harbor, bringing people between Hong Kong Island and Kowloon.

The Star Ferry is also a pretty great place to catch the Hong Kong Symphony of Light, a laser and light show set to music that involves most of the buildings along both sides of the waterfront. It runs at 8 pm every night. You can see some of the lasers in the picture above, but it’s better if you see it in motion. You can even sort of hear the music in this video someone uploaded to YouTube:

Last, but not least, there was some sort of paper lantern festival going on at the waterfront while we were there.

On a different evening along the same waterfront, I checked out the Hong Kong Space Museum, which had some nifty exhibits including a moon walk simulation and a spacewalk simulation. After the museum, I walked along the “Avenue Of Stars” and enjoyed the great view of the Hong Kong skyline.

13 thoughts on “Hong Kong, Part 2 – Victoria Peak and the Waterfront”