For my last trip outside of Germany before I move back to the US, I chose Cairo.  I have a very long list of places that I still want to go and see, but the pyramids have long been near the top of my “gotta see that!” list.  Egypt has had a rough time with their tourism industry since the revolution a few years ago, so I took advantage of the amazing prices and set up the trip to my 26th country.

Between the hits to Egypt’s tourism, the fact that July and August are the low season there and the exchange rate in my favor, everything was very affordable.    I booked four nights at a luxury hotel with a balcony overlooking the Nile river for about $750 US dollars, and booked tours of the pyramids and whatnot before I set out.

Arriving to the Cairo airport is somewhat chaotic.  If you’re a US citizen visiting just to be a tourist, you have to pay $25 in US dollars for the entry visa that they stick in your passport.

I’m glad that I chose to book the tours with hotel pick-up, because it turns out that navigating Cairo woud have been extraordinarily difficult for me.  For one thing, the Metro stations at Tahrir Square and Giza are both closed and have been for quite some time due to the revolution.   For another thing, I don’t speak Arabic.  I also can’t read the Arabic numerals that are displayed on signs there.  The first time I saw an Egyptian license plate, I thought it was hand-written.  Then I saw a dozen more and I realized this is just how they look.

Traffic in Cairo is absolutely insane.   The white lines on the highway are seen as a casual suggestion, and drivers weave in and out of each other’s lanes with abandon.  The drivers use their car horns constantly, almost like a form of echolocation, like bats in flight.  The car signals told other drivers where they were at all times.

People on foot cross the road- even the highways- without a care for the cars that are moving past.  People stop in the right-most lanes and get out of their cars.  There’s rubble on the outer edges of the highways, and random smoldering piles of rock that might have been fires a while before I got there.

I’ve never seen anything like it.  Here’s a YouTube video that showcases it pretty well, I think.  For more, just search YouTube for “Cairo traffic.”  It’s absolutely amazing.

Once I was checked into the hotel, I had about two hours to try to shake off my usual travel headache before I was picked up again for my first event.  I took some time to thoroughly enjoy the view from my balcony overlooking the Nile.  After dark, the Nile river comes alive with activity-  neon trimmed party boats, loud music, and street vendors are everywhere.

My first touristy event was a Nile river dinner cruise, with entertainment.  The food was very good.  I liked the sea bass quite a lot.

The entertainment was a band, then a Tannoura dance show, then a bellydancer.  The Tannoura is vaguely related to the Sufi Whirling Dervishes, and the man never stopped spinning.  Here’s a short clip of the show.

The next morning, I woke up early for my tour of the Giza Necropolis, including the pyramids and the Sphinx.    I also took a quick daytime picture from my balcony.    That tower in the left third of the picture is Cairo Tower, which has an observation deck at the top and a revolving restaurant just below that.  I’ll come back to that later in the post.

I ganked this map of the Giza Necropolis from Wikipedia, because it shows a lot of important detail.  The first thing that I didn’t realize before this trip is that there are more pyramids in Giza than the three big ones that everyone notices.  If you look carefully, there’s three smaller ones next to the Pyramid of Khufu, which is referred to as the Great Pyramid.  There’s also another three smaller pyramids next to the Pyramid of Menkaure, and several other smaller pyramids in the Necropolis.  There are 138 known pyramids throughout Egypt, and a whole bunch of them are right there in Giza.

Also, each of the three largest pyramids is connected to a temple by a causeway.  One of these is still intact today and is visible to the naked eye.  The others are a little harder to spot.

Here’s the Great Pyramid, also known as the Pyramid of Khufu.  This is the largest of the three on the Giza plateau.  The Pyramid of Khufu was the tallest man-made structure in the world until the Eiffel Tower opened in 1889.

This photograph is looking back at the city of Giza from the base of the Great Pyramid.    Giza comes very, very close to the pyramids on one side.  The other side is the start of thousands of miles of Sahara Desert.

The Pyramid of Khafre is the only one of the pyramids in Giza to still retain a portion of its limestone casing.  Supposedly, all three of the big pyramids were at one time fully covered in this polished limestone, with gold capstones.    That must have been quite a sight.

Khafre also looks larger than Khufu to the naked eye, but that’s because it’s on a higher elevation.  It is actually smaller in both height and width.

I had the chance to descend into the burial chamber of one of the smaller pyramids next to Khufu.  The attendants were happy to take my picture as I climbed back up.  They’ve mounted handrails into the tunnel because the pathway down is not steps; it’s a ridged wooden plank to give you traction as you climb or descend.    This photograph is only moments before I whanged my head coming out of the entrance:  The Curse of the Pharaohs takes many forms.

You can choose to go into the Great Pyramid, but it’s another 200 Egyptian Pounds (about $30) and I decided that one musty burial chamber was enough for me. 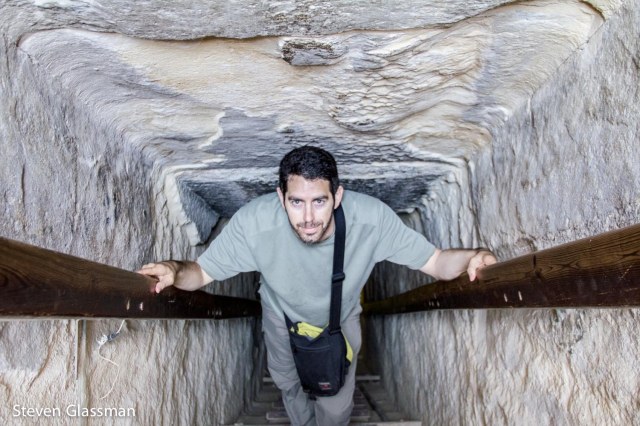 Khaled took me into one of the smaller structures near the pyramids- this was a small structure supposedly built for one of the architects of the pyramids.  Here, Khaled is pointing out the cartouches-  the symbols inside the oval with a crossbar on the left side.

Each cartouche is the name of someone royal.  In most cases, it refers to those who are buried inside the pyramids.  I do not recall which was which here.

Khaled made me do traditional silly tourist pictures with the pyramids, but I steadfastly refused to do a jumping picture.  I’m not a fan of pictures of people jumping in front of landmarks.

One of my options was a camel ride from behind the Pyramid of Menkaure around the outer edge of the Necropolis to the Sphinx.    I’d never been on a camel before, so I was game.  My thoughts are as follows:  1) It’s a damn good thing I brought sunscreen, because this was actually a camel ride in the desert.  2) Camels are not a smooth ride.  It takes a little while to get used to the rhythm.

I think this is how camels say hello.

One of the advantages of taking the camel ride was that I got a really phenomenal view of all the pyramids lined up.   This photograph contains nine pyramids.

After about 45 minutes on camel-back, we arrived to the Sphinx.  This is the interior of the Temple of the Sphinx, with very old alabaster flooring.  Supposedly, this temple had a roof at some point. 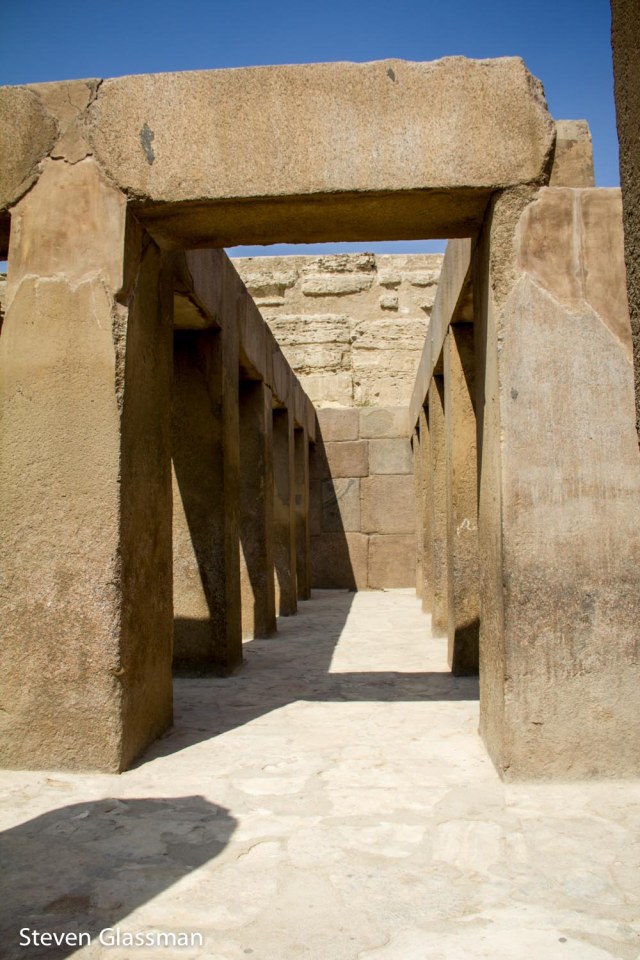 The Sphinx is missing forehead ornamentation, a beard, and its nose.  I’ve seen the beard in the British Museum in London.  It’s not clear what happened to the forehead ornamentation.  As for the nose, one popular theory says that it was accidentally shot off by French soldiers.  Damn you, Napoleon!

The Giza Necropolis was the highlight of my Cairo trip, but that didn’t stop me from seeing other things.  I mentioned the Cairo Tower earlier-  this is the front entrance.

Here’s a closer view of the entire tower. 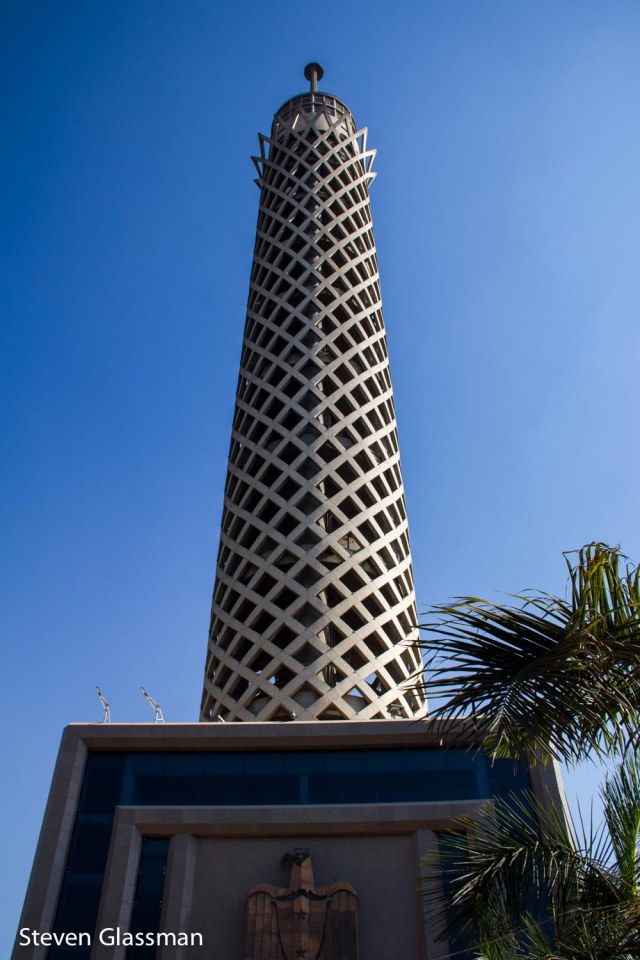 From the viewing platform on the top of Cairo Tower, the views are fairly spectacular.  Here’s one view along the Nile.

Cairo is a very dense city.  It  has an estimated population of 12 million people, and when you include Giza and the remaining surrounding metropolitan area, it has a population of nearly 22 million people.  That’s roughly a fourth of the residents of the entire country. 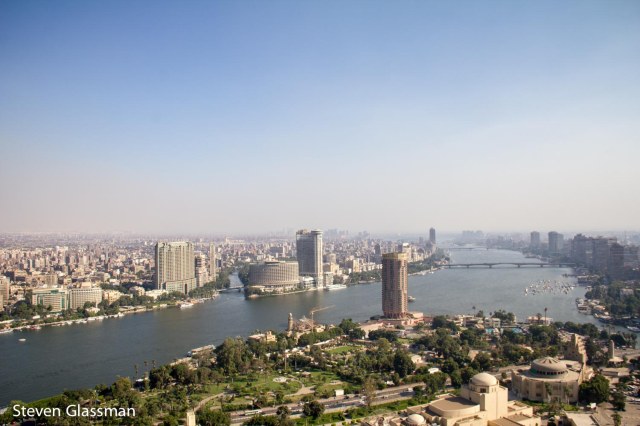 On a clear day, you can even see the pyramids from Cairo Tower.  On a hazy day, you can still see them- just not clearly.

This is Tahrir Square.  It’s not really square, as far as I can tell. This is where  the most well known protests of the Egyptian revolution took place.

This is an area of the city adjacent to Tahrir Square.  The reddish building is the Egyptian Museum.  I’m not sure what the burnt out building next to it is. 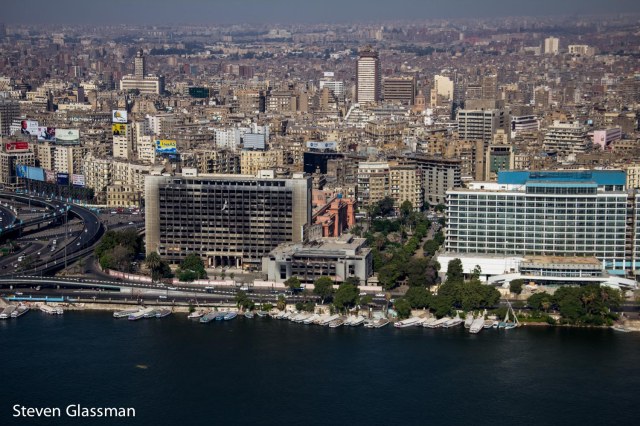 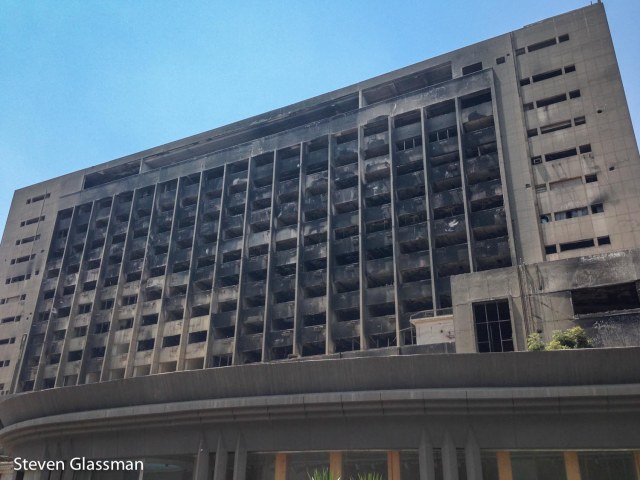 When I was walking to the Egyptian Museum, I walked past four tanks and some barbed wire.  This isn’t a very good picture because I was trying not to be super obvious that I was taking a picture.  My goal here was to attract as little attention from the armed soldiers as possible.  There were a lot of armed soldiers around Cairo, and it was disconcerting.    To get into the museum, or the Cairo Tower, there were security checkpoints with metal detectors.  To get into my hotel, I had to get past the bomb sniffing dog and a metal detector.

I never really felt comfortable or safe while walking around Cairo.  I only felt safe in the touristy areas, behind  the metal detectors.

On my third night in Cairo, I went to the Pyramid Sound & Light Show.  It was somewhat cheesy, but they used lasers on the Great Pyramid, so I liked it.   The whole thing is done from a very comfortable deck overlooking all three pyramids and the Sphinx. 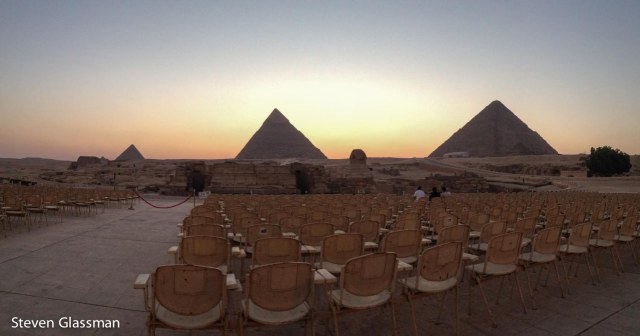 I will close this post with a picture taken from a moving car on my way out to the Pyramid Sound & Light Show-  this was taken just before sunset with an iPhone.  I rather wish I had taken the dSLR out for this part of the evening.

Have you ever been to the Pyramids in Giza?