Before I moved to Germany, I had a weird misconception that the Autobahn was a single world-famous stretch of roadway.  I stupidly didn’t register that “Autobahn” is really just the name for Germany’s entire system of highways until I was already here and seeing the separate segments of the highway.  I now know that Regensburg sits at the intersection of the A3 and the A93, and both of those roads are considered “The Autobahn.”

We think that the entire Autobahn has no speed limit. 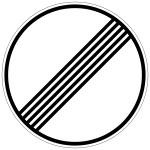 It only takes one time on the highways here to see that this isn’t entirely true.  There are places on Germany’s roadways with no posted speed limits, designated by the circle and slashes seen to the right of this paragraph.  One ADAC estimate says that roughly half of the Autobahn  does indeed have a posted speed limit.  I can attest to this, since I drove on the Autobahn last week for the first time.

I don’t usually have a car here- when I moved over, I sold my beloved Honda Civic in favor of using the bus and train to get around.  I didn’t want to deal with the expense of parking, of getting gasoline, of insuring a car- and I really don’t need one here.    I drive when I’m in the United States, but not here.

When several of us went to Zürich for business last week and I had the opportunity to sign on as a second driver for the rental car, I didn’t have to think too long before signing up.  As a result, I got to drive a bit in both Germany and Austria.  I have a few thoughts on the experience:

Would I rent a fast car some time and drive fast on the Autobahn again?  Probably, it was kind of fun despite the terror.  Maybe next time I just need a faster car…

Have you been on the Autobahn?  What’s the fastest speed you’ve ever driven?