Over the last year, I’ve noticed that you don’t see as much posted advertising in Germany as you do in the US.   Certainly you almost never see a full sized billboard along a highway here.  Sure, there’s advertisements on bus stops and benches, and posted on buildings near major roadways, but the big billboard sign isn’t a thriving species here.

The cylinder of advertisement, however, is everywhere: 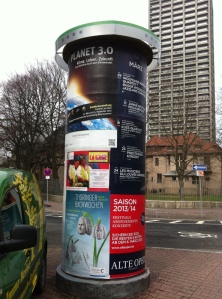 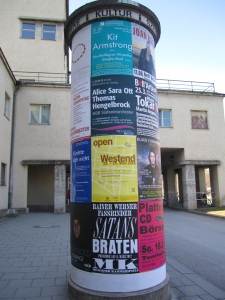 I find the cylinders to be fascinating, because they contain so much information, and yet they’re still wildly ineffective for advertising.  If you’re driving past in a car, would you really catch more than a word or two off of this ad-pole?

Is the advertising where you live different or unusual than what you’re used to?

8 thoughts on “There’s A Signpost Up Ahead”