I’m really not much of a museum-goer.  I like some of them, to be sure, but not all of them.  I’ve talked before about the Deutches Museum before, and I probably mentioned the local historical museum here in Regensburg, but that’s likely it.

That being said, one surefire way for a museum to entice me to come inside is to put giant dinosaurs out front.  For example, the Senckenberg in Frankfurt.  Across the street from the front door, helping you find the way, is this fellow: 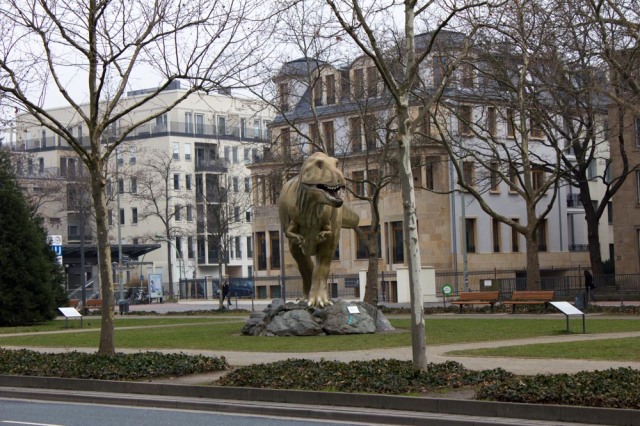 …and in front of the main building is this friendly critter:

Once inside, the style settles down a bit, but this is the sort of museum that has skeletons of things and has various animals represented.  There’s a giant hall with a T-Rex, a Triceratops, and some other well known dinos.

The amount of animal life represented in the museum is staggering, and I could easily have posted a gallery of dozens of pictures, but I decided to represent the museum with three dinosaurs and an ancestor of man.  There’s a very nice area about the evolution of hominids with various hominidae skulls, and at the center, a rather nice display of Lucy the Australopithecus.

You might consider this a small amendment to the ‘killing time in Frankfurt‘ post.  The museum is easily reachable by public transportation, and it’s a great way to kill a few hours in the city.

What type of museum do you like the most?  What’s your favorite museum?