Previously, on “Steven and Michelle Go To Italy,” our peripatetic siblings checked out Venice and Rome.  What’s left?  The Vatican, of course!  This was our first view of St. Peter’s Piazza, a.k.a. Pope Central. 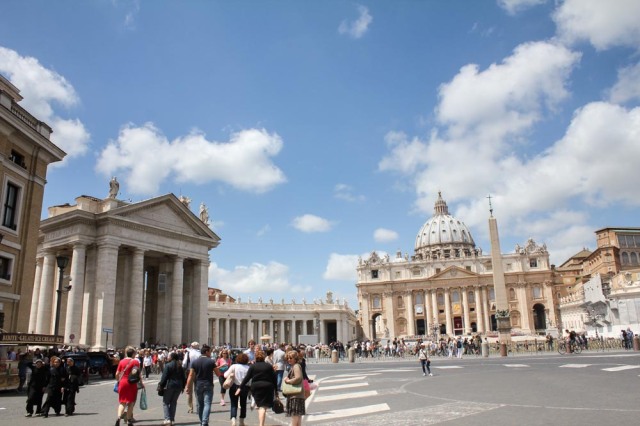 The way in to the Vatican museums was an enormous spiral walkway.  I don’t think this was the usual way in; they said something about the usual way being blocked off for some reason.  Anyway, this was a herd moment.

At the top, there’s a series of rooms, and this incredible view.  From here, St. Peter’s Basilica looks like a matte painting in a Lucasfilm movie, doesn’t it? 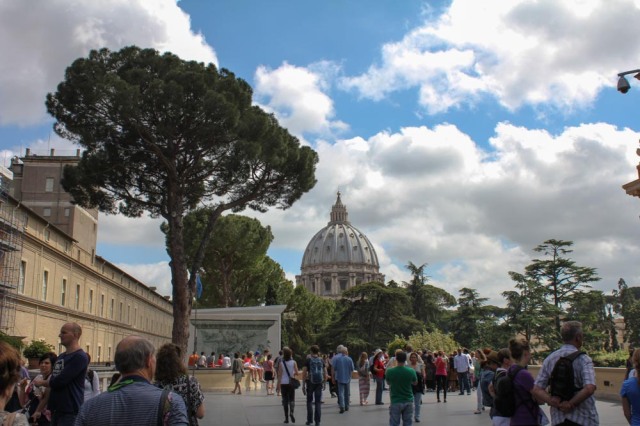 This was our tour guide.  She’s from Indiana, as it turns out, but she lives in Rome and works as a Vatican tour guide.  She has an incredible amount of knowledge.  The big bronze sphere she’s standing in front of is a sculpture called Sfera con Sfera (Sphere within Sphere) by an artist named Arnaldo Pomodoro.  Our tour guide pointed out that Arnaldo Pomodoro sounds very nice in Italian, but in English, he’d just be Arnie Tomato.  This amuses me.

Sfera con Sfera rests on a disk of mercury, and can be spun by a single person.  It’s heavy, but moveable.

I didn’t know this when I was in Vatican City, but there are actually thirteen versions of Sfera con Sfera.  I first realized it was not unique when I saw a second one at Trinity College in Dublin.  I’ll get back to that in a few weeks when I post about my trip to Dublin- we’re still in Italy.

Well, technically we were in The Holy See, not Italy.  Vatican City is a fully functioning and recognized country with its own police, fire, military, and post office.  It’s the only country in the entire world with a birth rate of zero. But I digress. 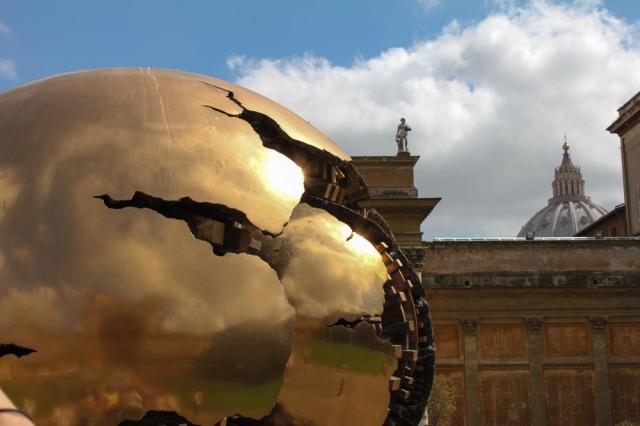 Let’s take a break from the Vatican to talk about water in Rome.  Specifically, open water spigots that are all over the city.  There’s two or three in the Roman Forum.  They’re on streets all over the city of Rome.  The water is perfectly drinkable,  and the locals refill their water bottles from them all the time.  The locals also know that if you block the flow from the bottom, there’s a small hole in the top that turns it into a drinking fountain, like so:

Meanwhile, back in the Vatican museums, there’s a whoooole lot of busts.

I’m not really going to talk much about these next few pictures.  If you’re a student of art, particularly of sculpture, you’ll most likely recognize some or all of these.  I acknowledge that they’re amazing, but I’ve never had much to say about sculpture.  Here’s some really amazing sculpture, though. 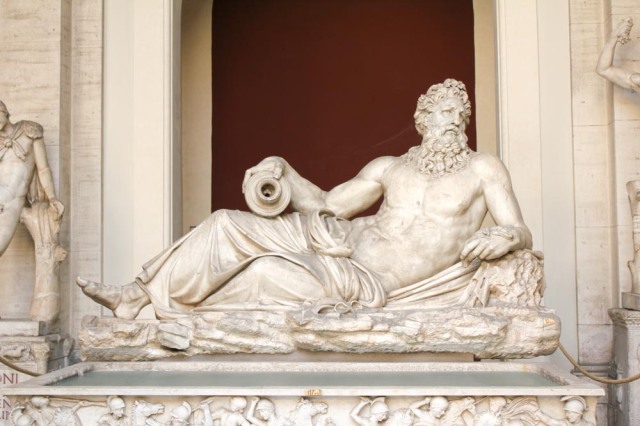 I mentioned that the Vatican has their own fire department, right?  Here it is.

The tour of the Vatican museums goes through the Raphael Rooms.  The artwork done by Raphael in these rooms is amazing, especially for someone who spent all that time learning to wield a pair of Sai while running around the sewers of New York.

This particular panel, the School of Athens, is my favorite.  Nobody is in this crowd by accident.   Dude in the blue robe all by himself?  Diogenes.  Serious looking man front and center in the purple shirt and calf high boots sitting by himself?  That’s Michelangelo.  Pythagoras is in there.  Euclid is there.  Alexander is there.  Plato, Aristotle, Zeno, Epicurus, all present and accounted for.  Raphael painted himself in, as well as his favorite girlfriend.  The depth and detail in this fresco is amazing.

I’ve seen Rodin’s work before, several times in several places, but seeing an original of The Thinker always makes me stop and ruminate.

You’re not supposed to take pictures in Michelangelo’s master work, the Sistine Chapel.  I’m a rebel.  This room is pretty incredible, though.

After the tour, we wound up in front of the Basilica again.  There were big banners up because during the Pope’s service the next morning, two nuns were to be canonized.  That is, they were to be sainted.  I’ve forgotten their names, but I’m sure there’s a Papal website that lists them somewhere.

The Pope’s altar is set up and ready to go. 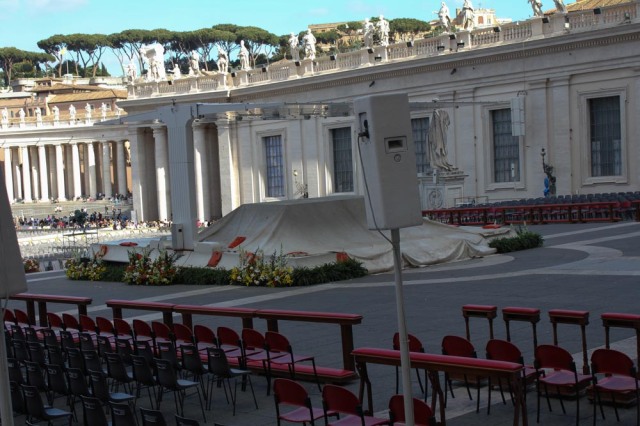 Before we ran out of time, we took the walk up to the Cupola of St. Peter’s Basilica.  You know me and my love of tall places.  I have to climb.  The first part is a short elevator that gets you to this level, and shaves 200 steps off your climb. 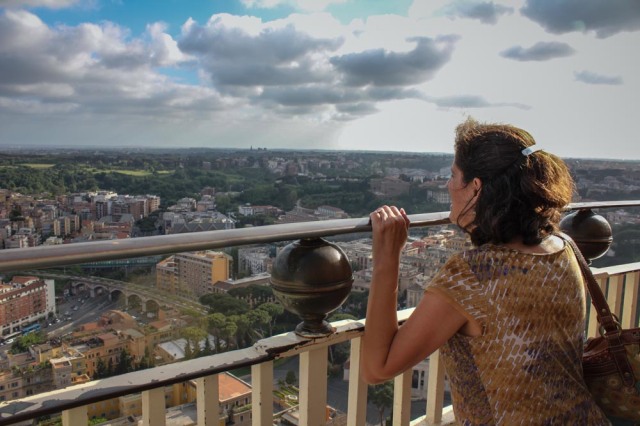 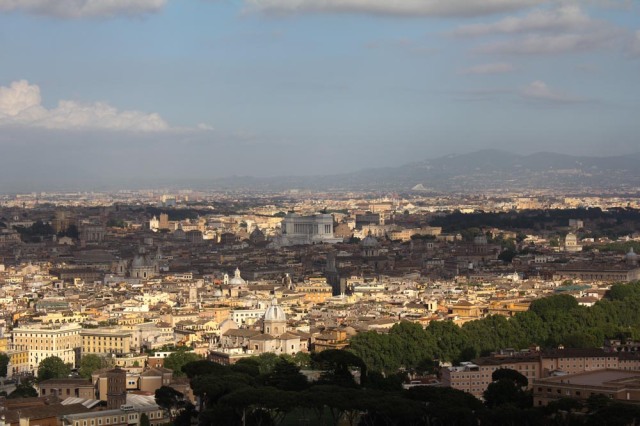 After we climbed down, we finally went inside the Basilica.  The light does this amazing streaming thing that, once again, looks like a matte painting.

I was a little bit amused that the Basilica uses Bose speakers that are painted to blend in with the marble.   Very Popey!

No visit to the Vatican is complete without a few minutes spent marveling at the Papal Swiss Guard and their mighty multicolored pantaloons.  Members of the Swiss Guard must apply for the position.  They must be Catholic, single males with Swiss Citizenship, between the ages of 19 and 30.  They must have completed basic training with the Swiss Military.

They must also be able to appear dashing while wearing a black beret, and they must be comfortable with wearing a sword at their left hip, cos it’s there.  Hidden in this photograph, though. 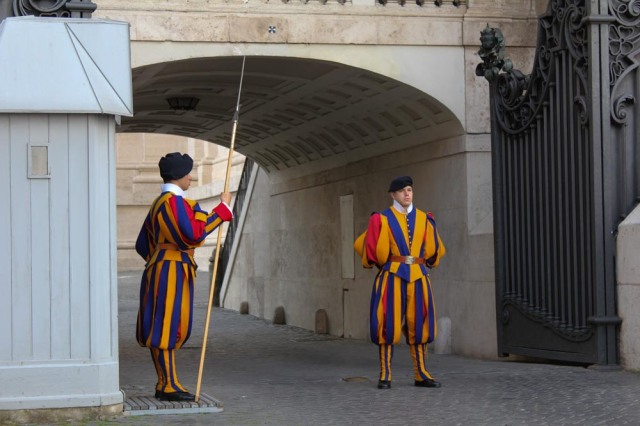 I mentioned earlier that the Vatican also has its own Post Office, right?  Here’s the front doors.  You’re not supposed to take pictures inside, so you can only guess what I did when I went in to mail a postcard.

On our way out of the Vatican, I turned around to take one last picture of St. Mary’s Basilica with the sun behind the Cupola.   It’s a hell of a building, if you’ll pardon the pun.

Finally, to wrap up our time in Roma, we went to the pizza restaurant which, according to Trip Advisor, was the number one rated pizza joint in the vicinity.  Apparently, being number one means you don’t have to stay open. 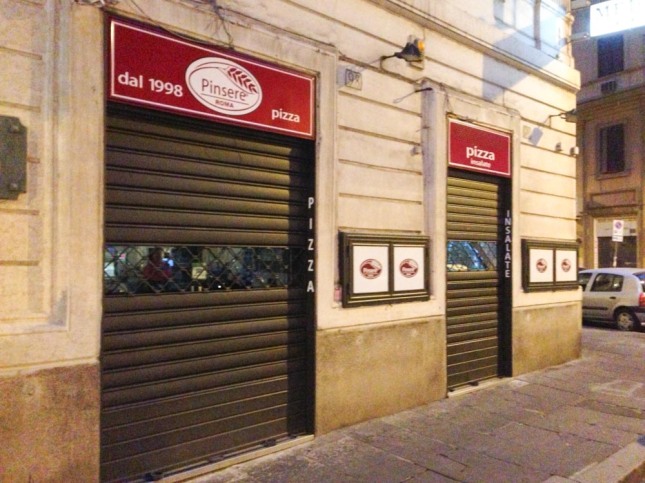 Luckily, the place across the street was open and inviting and kind of amazing.  It was also called Henry Cow, which I kind of love.  I had this pizza.  Visible on the pizza are, clockwise from the 12:00 position: artichoke, mushrooms, an egg, prosciutto, and in the center, black olives.   It was absolutely delicious, and it was a fantastic last supper.   I mean it was a great last meal in Italy.

Have you ever seen the Sistine Chapel?  Is that the biggest ball of brass you’ve ever seen?  Have you ever had an egg on a pizza?  Is soy gelato still technically gelato?