I’m on an August Break from my regular blogging schedule. Here’s today’s pictures.  There are 43 of ’em today, but I promise, this is still August Break.  Most of these won’t have commentary.

I went to Star Wars Celebration Europe in Essen, Germany during the last weekend of July.  There were cool panels with Mark Hamill (Luke Skywalker), Carrie Fisher (Leia Organa), Anthony Daniels (C3P0), Ian McDiarmid (the Emperor), Warwick Davis (Wicket the Ewok), and many many others.

When it comes to conventions, everyone goes for different reasons.  My friend Lorrie goes partly for the panels, but mostly for the vendor tables.  Some people go to show off their costumes.  Some go because they want to hear the panels.

I like the panels, and sometimes I come back with a fun geeky t-shirt or two, but the one thing I always do at a con is to walk around with my camera.  I love seeing other people’s costumes, especially if they’re really creative or accurate or just funny.  I took hundreds of photos in Essen.  Here’s 43 of my favorite shots from the weekend.

This was before the event.  I call this “Off-duty Bike Scouts.”

There were a lot of Leias around.  And more than a few Padmes.

The Hasbro area had recreated several scenes from the movies in incredible detail using their action figures.

This half-scale model of Vader’s TIE-fighter was on display.

You could also get a picture of yourself in the cockpit of this snow speeder.

Bavarian clone trooper.  This man had the most amazing mutton-chops under that helmet. 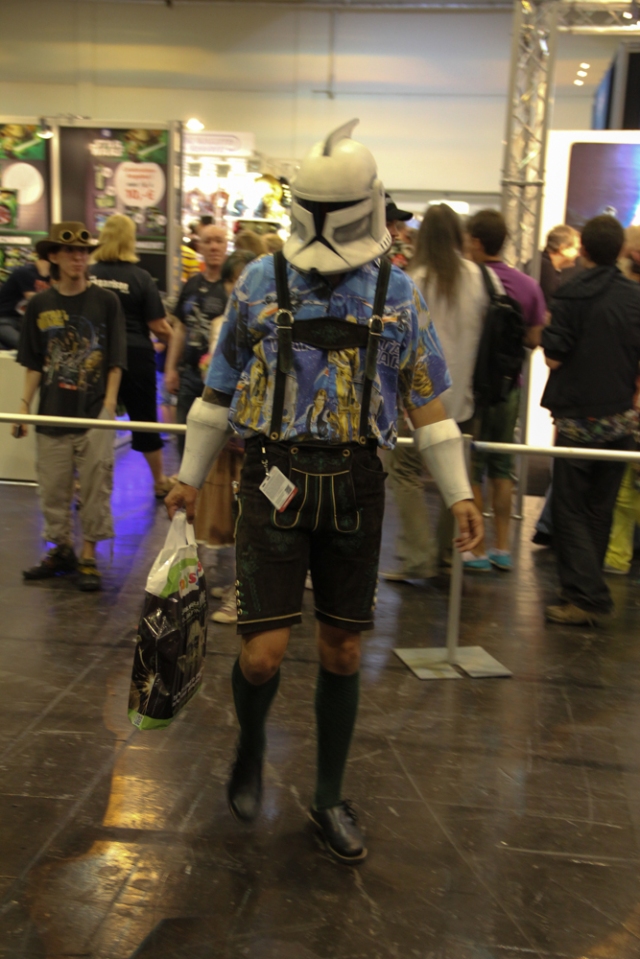 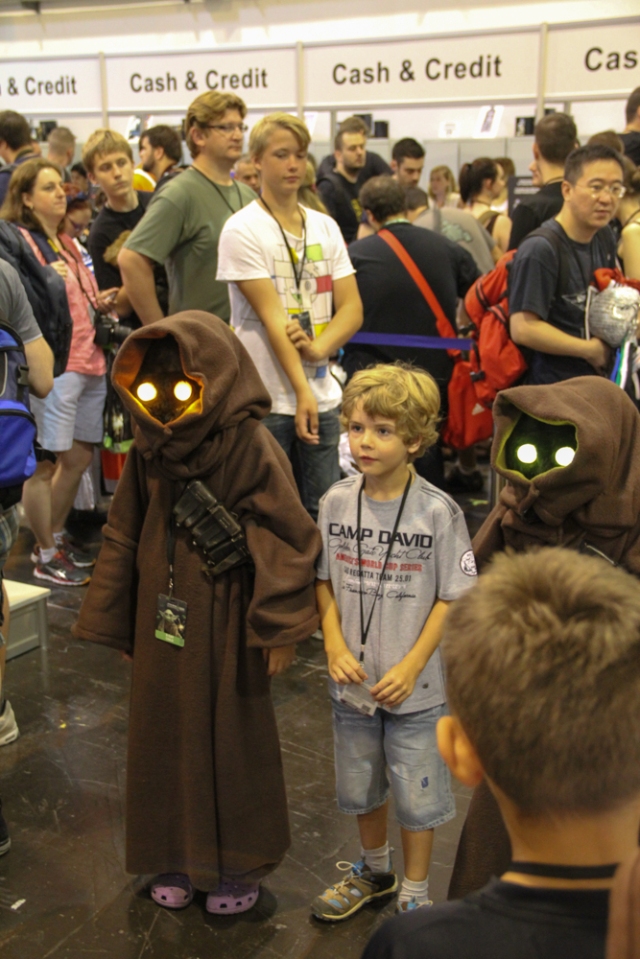 I thought about posing in this scene recreation, but I forgot my giant diaper.

The wampa was at least eight feet tall.  And very fast.

This girl did an amazing Barriss Offee costume.

Even a princess has to eat sometime.

There were so many Mandalorians.

…not to mention Angry Birds. 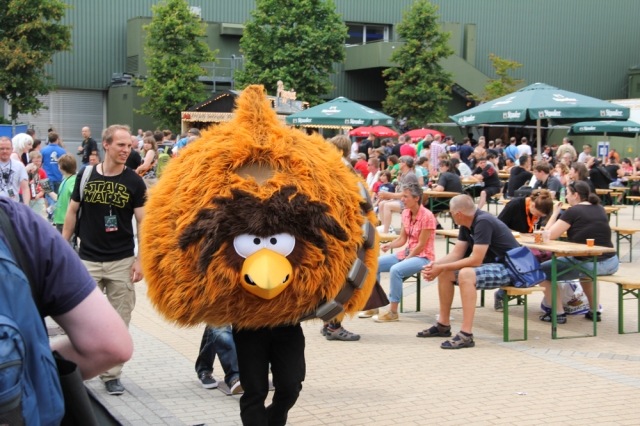 This was on the leg of the AT-AT in the main hall.  I didn’t even notice the sign until the third day.

I only saw four or five slave Leia costumes.  It was refreshing to see so many more Leia variants that didn’t involve the bikini.  Don’t get me wrong; I love this look (as all heterosexual geek males do,) but it’s getting a bit overplayed.

One of these Imperials is just a mannequin.   See if you can guess which one! 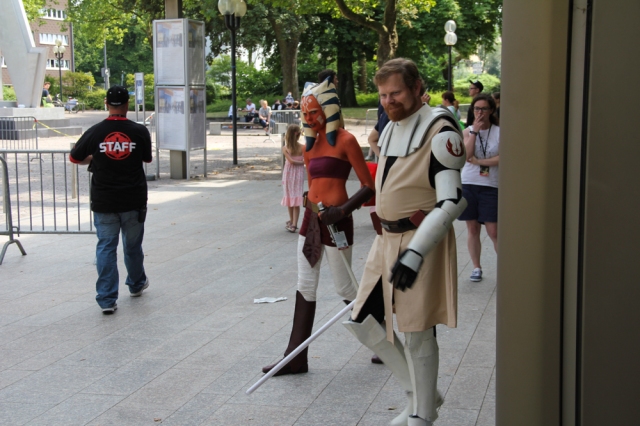 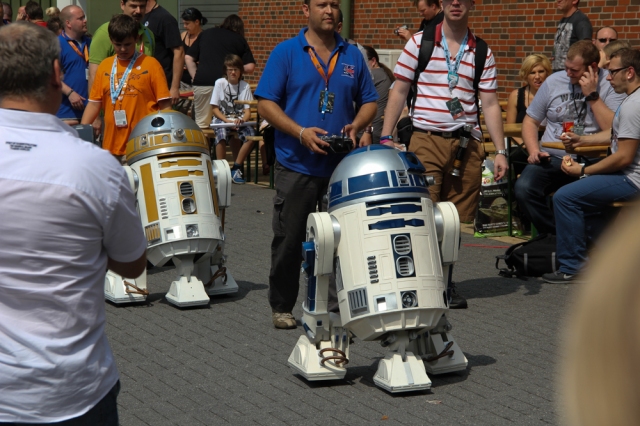 An AT-AT driver!  I was amazed at the variety of costumes people chose- it wasn’t all main characters. 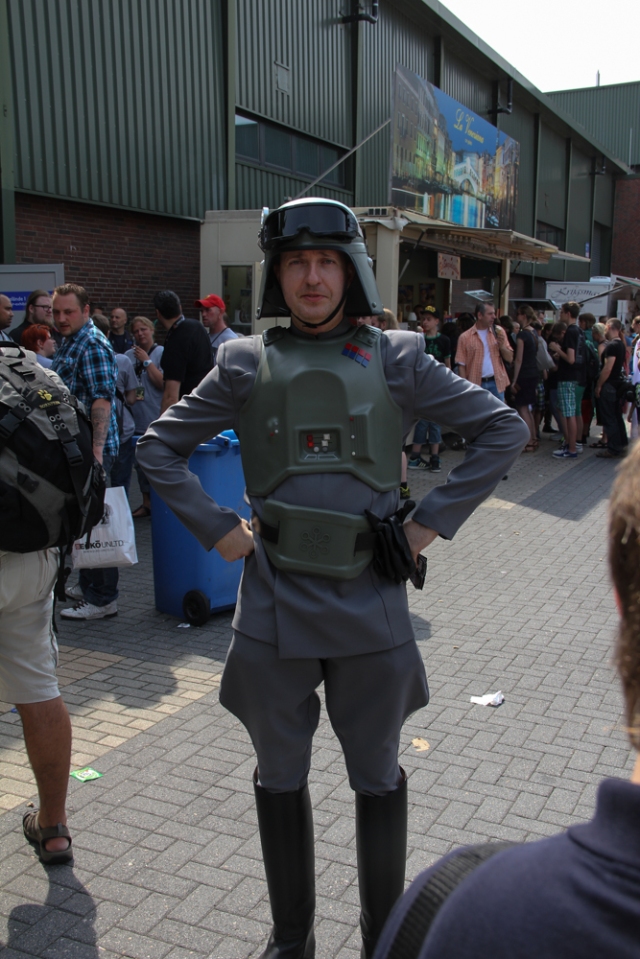 I snapped this picture because of the Dengar costume.  I didn’t realize until I saw it on a larger screen that Kenny Baker (R2-D2) is in the corner! 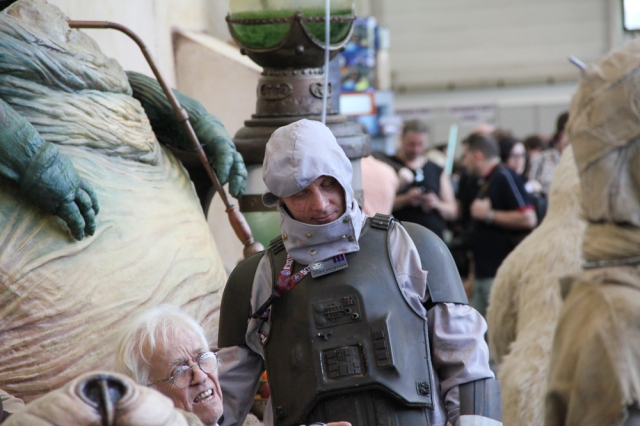 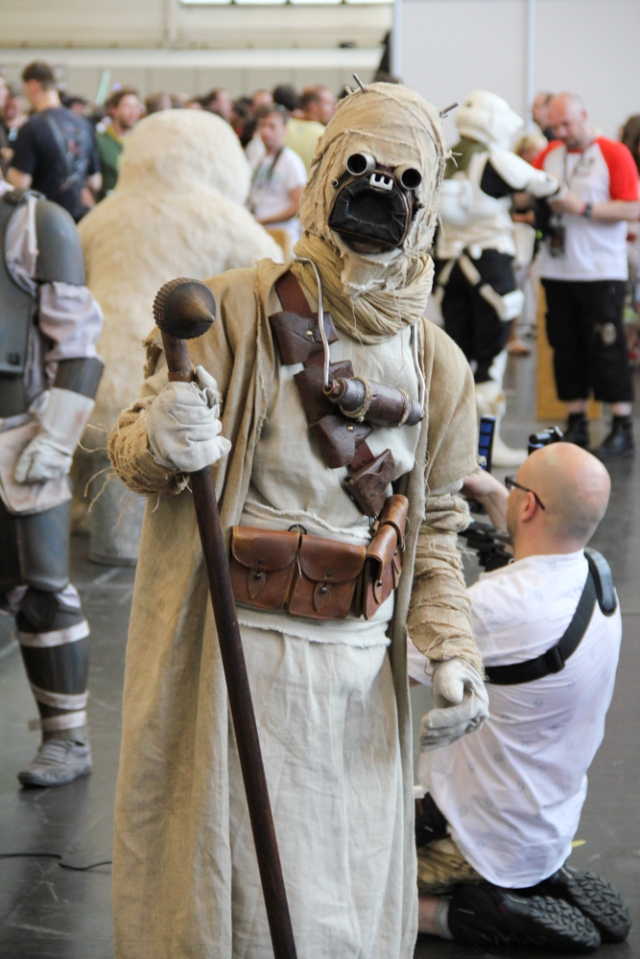 Surprisingly few Vaders- only two or three all weekend.

All four of these men have played Boba Fett at some point or other.  The youngest, Daniel Logan, was “Young Boba” in the prequel trilogy.  The other three were from the original movies.  The one wearing the costume is Jeremy Bulloch, the original Boba Fett, and the one who spent the most time in the role.