On the 11th of September, I was able to attend the installation of several Stolpersteine.  I’ve posted about Stolpersteine before, when I first learned what they were.  For those of you just tuning in, I’ll refresh your memory:

The German word Stolperstein literally means “stumbling block” or “obstacle” and Stolpersteine is the plural.    They were created by artist Gunter Demnig in 1993 and the first installation was in Cologne, Germany, in 1994.

The Stolpersteine blocks are designed as memorials to commemorate individuals who were sent by the Nazis to prisons and concentration camps, as well as those who emigrated or committed suicide to escape the Nazis.  Some of the blocks represent those killed by the Nazis and some represent survivors.    The Stolpersteine are not limited to Jews, either.  The vast majority were Jews, but there have also been blocks placed for various other types of people, including Romani people, homosexuals, blacks, and even Christians who opposed the Nazis.

The actual block is a ten centimeter concrete cube covered with a sheet of brass.  Demnig stamps the details of the individual, the name, year of birth, and the fate as well as the dates of deportation and death, if known.  Each block begins with “Hier wohnte,” which is German for “Here lived.”  Most are set at the last residence of the victim, but some are set near workplaces.

More than 40,000 Stolpersteine have been installed so far, in over 1000 cities and towns in about twelve countries.

On this particular day, they were installing 26 Stolpersteine in eleven separate locations around town.  I was able to attend two of the eleven installations before I had to head into work.  Before an installation, here’s what a Stolperstein looks like:

The place where the stone would be installed was marked, and a city worker dug out the existing sidewalk.

A gentleman who works with der Initiative Stolpersteine in Regensburg said a few words, then a guy from the city spoke, Next, a woman read the biography of Johann Baptist Fuchs, the individual named on the stone. Finally, a relative of Johann Fuchs said a few words.  Afterward, the stone was set into place with concrete.

After the stone was installed, the man who was related to Johann Fuchs laid a white rose next to the stone.

A short while later, at a second location, we  began the same procedure.  This time, with four Stolpersteine and fewer speeches.

Each installation had a bit of flute music, though. 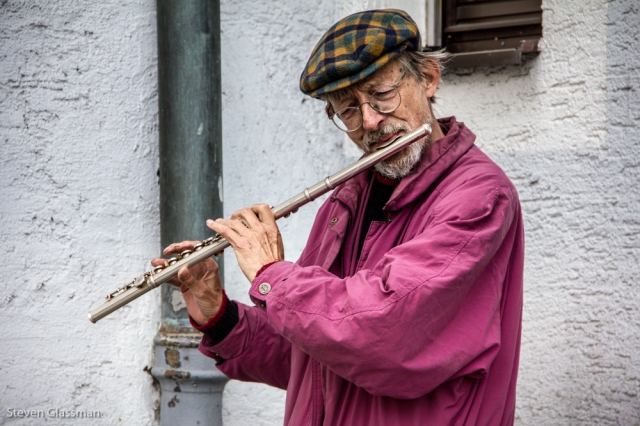 The installation was done very carefully, with the workman making sure that the stones were level and flush with the rest of the sidewalk. 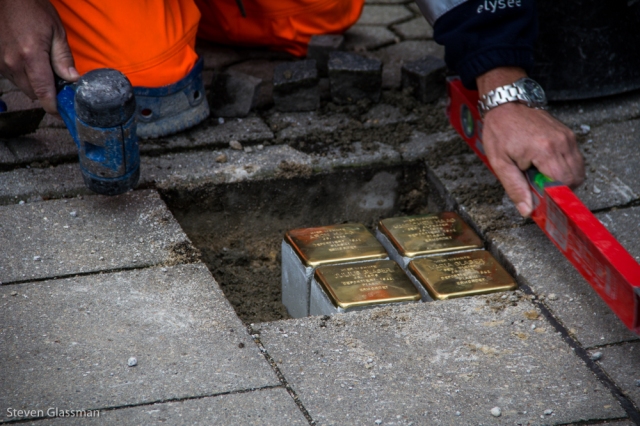 Once the concrete was set in, the stones were cleaned off with a sponge.

Once again, roses were laid on the newly installed Stolpersteine to conclude the installation.

Have you ever stumbled across a Stolperstein?

6 thoughts on “Remembering the Holocaust on September 11th”