Back in October, Germany Ja! posted about a Planetenwanderweg (planet trail) in Bad Nauheim, and I just had to go see it myself. The Planet Walk is a two kilometer long trail with statues representing the planets of our solar system at a 1:2.8 billion scale and informational plaques next to the statues.

It’s a short hop outside of Frankfurt am Main, so I spent a morning over in Bad Nauheim the last time I was in Frankfurt.   There are apparently thermal baths in town- Bad is German for Bath, so this is pretty common for towns that have names starting with Bad.  I wasn’t there for the thermal baths, though.  I wanted to see the Planet Walk.

The first thing I noticed was that there’s lots of art everywhere.  For example, this was in the tunnel between the train platforms at the Bahnhof.

In order to do the Planet Walk, first I had to find it.  I knew that the center of this solar system was the sun, and that it’s in Goldstein Park, but Google Maps and Apple Maps weren’t terribly helpful in getting me to a starting point, and all the official town tourism site told me was that it started to the East of the city.  After a bit of walking around, I was able to find it though.

The Sun, with a representation of Apollo, the sun god: 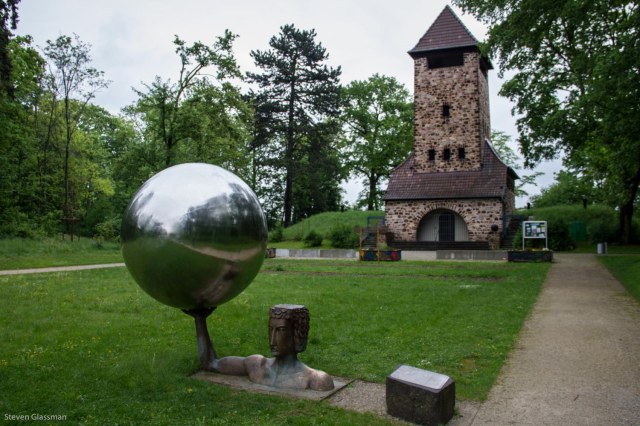 The first five planets are relatively close together, so following the trail was very easy at this point. 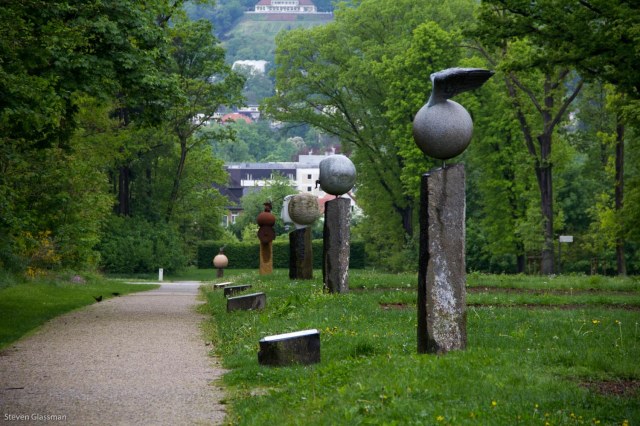 First up for the planets is Mercury, winged messenger and all around swell planet.

Next, we have Venus on the half shell.

Earth was so interesting that I had to take two pictures, one from the side and one from the front.  I should have snapped the other side as well, since it had a representation of plant life.

Following Earth is Mars, bringer of war.  I think it’s interesting that the coloration of the statue was made to reflect that of the Red Planet.

At the corner of this particular piece of greenery is Jupiter, hurler of jagged lightning.  Insert your own gas giant joke here, please.

From Jupiter, you have to leave the park, cross the street, go under the train tracks, and exit the Bahnhof through the front door.  There you will find the ringed planet Saturn, embedded in the cobblestone in front of the Bahnhof.

From Saturn, it gets much harder to find the planets.  Walk down that street until it ends, cross into the plaza behind the street, go past the very large fountain, and enter the Kurzpark.  In this big green space, the walkway continues, and eventually reaches Uranus, the lone Greek in our pantheon of Roman planets.

…and this is where I got lost.   From Uranus, I knew that it would be a while before I found the next planet, and I knew also that the trail ended up a hill, but I wasn’t to the hill yet.  I walked a very long distance through Kurzpark and wound up on entirely the wrong side of things.  I used my phone to point me back in the right direction and walked until I found a normal street again.

And that’s where I found Elvis.

No, Elvis isn’t buried here. That honor still goes to Graceland.  However, Elvis lived in Bad Nauheim for 18 months when he was stationed at the nearby American military base, and the town is still pretty jazzed about it.  They even renamed a street after him.

Running into Elvis made me realize that I had gone the wrong direction after Uranus, and it wasn’t long before I was back on track, easily finding sea god Neptune with the help of carefully re-reading Germany Ja’s post on my phone.

The last part of this walk was a real treat-  the Planetenwanderweg was obviously established before Mike Brown and Neil deGrasse Tyson demoted Pluto to the status of Dwarf Planet.  To reach Pluto, you have to go up the hill past Neptune, then jog left a bit, then up some stairs, then cross a street, then up some more stairs, then up an ascending path toward the Johannisberg Cafe and Hotel.

I was out of breath when I reached little Pluto, but the view was completely worth it.

Oh yeah, and there’s this:

After successfully exploring the solar system, I walked back down the hill to head back to Frankfurt.  On the way back, I discovered that Bad Nauheim is a pretty little town.  This amazing fountain was on my walk back.

They also have a tall and pointy church.  Standard issue in Germany, I believe.

Archways lead back toward the big fountain and the Kurzpark.

…and there was art everywhere.  These two are painted on the utility boxes in front of the Jade restaurant. 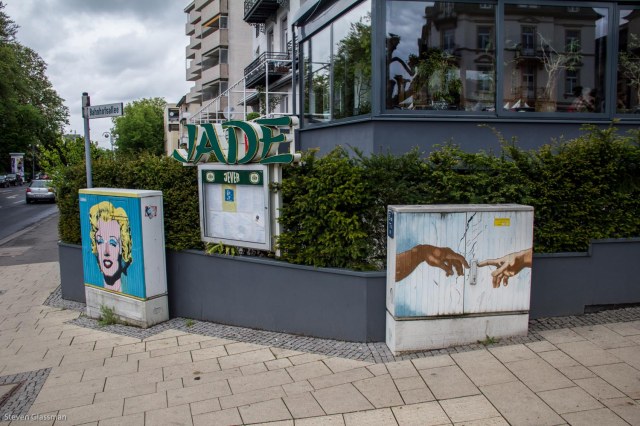 Have you ever been to Bad Nauheim?  Did you find Elvis?

11 thoughts on “The Day Elvis Helped Me Find Pluto”