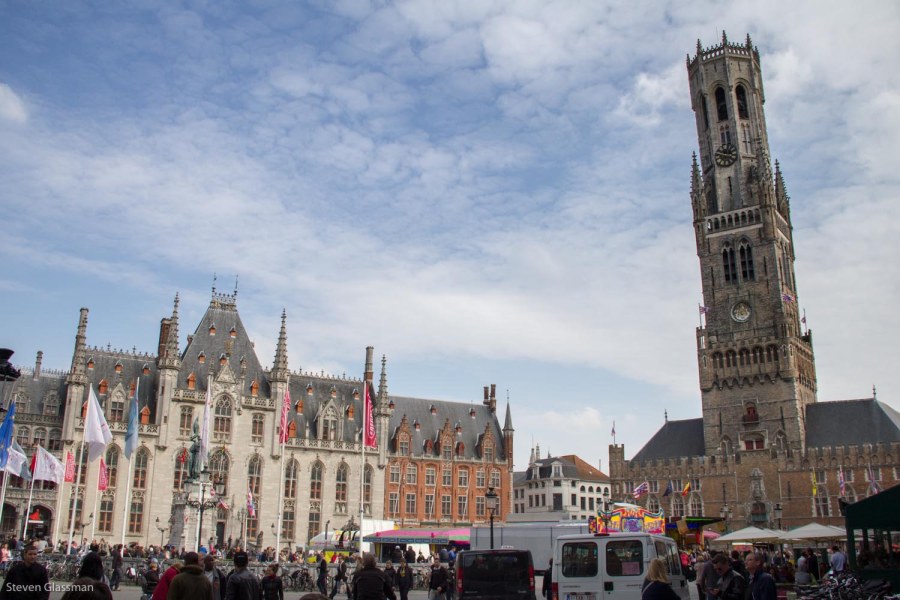 I’ll be breaking up my Belgium and Luxembourg posts into smaller chunks and posting them out of sequence, because I took almost a thousand photographs in four days.  I’m not going to post more than 20-30 pictures for any one post, but I still want to space it out a bit so that it’s not too overloading.  So, onward!

My first Belgium post was the city of Bruges in Flanders, the northern part of Belgium.  I haven’t seen the movie by the same name yet, but I’m pretty sure that referencing the movie’s title in a blog post about Bruges is a requirement in the Expat Blogger Bylaws.  Bruges is the capital of West Flanders, where Ghent is the capital of East Flanders.  For a country with relatively small geographic boundaries, there are an awful lot of subsections of Belgium.   There are also a great many languages, since Belgium is officially bi-lingual.  The northern parts speak Flemish, which is a bit like Dutch, and the southern parts speak French.  There’s also a small German-speaking community on the eastern side of Belgium, and English is prevalent as well.

The main export of Bruges seems to be pretty photographs from tourists.  If you arrive on a bus from Brussels, as I did, you might start out near Minnewater, or “Lake of Love.”  The story goes that you will experience eternal love if you walk over the lake bridge with your partner. There’s a legend attached, and it’s explained in great detail on this site.  Regardless of its efficacy as an aphrodisiac, I can’t argue that it’s a really pretty lake.

Also seen in Bruges: A very large swan and duck community.  I took other pictures of large quantities of lounging swans, but this picture just looked nicer. 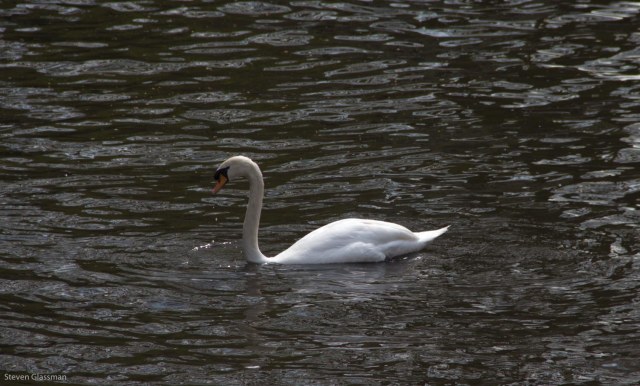 Not all of my pictures have important captions or details.  Some were chosen just because it shows how nice the city is, and how nice a day we were having.

This is a “House of God” where a bunch of nuns used to live.  This is a fairly common thing in Bruges.  There was a lot of detail about this from the tour guide which I missed.

This is the courtyard inside the House of God.

…and this is why I missed what the tour guide was saying.  I was too busy stalking a bee with my camera, because that’s how I roll.  I quite like bees.

We took a boat tour later in the day, because it covers three or four kilometers of city canal and it’s quite pretty.  This was not the boat I was on, but it’s a good shot of the type of boat-  they really pack people onto these things.  They offer life vests, but most of the canals are only a meter or two deep, so if you fell in you would probably survive quite easily.

I don’t really know why there’s a random Bogey statue here, but I thought it was kinda neat. 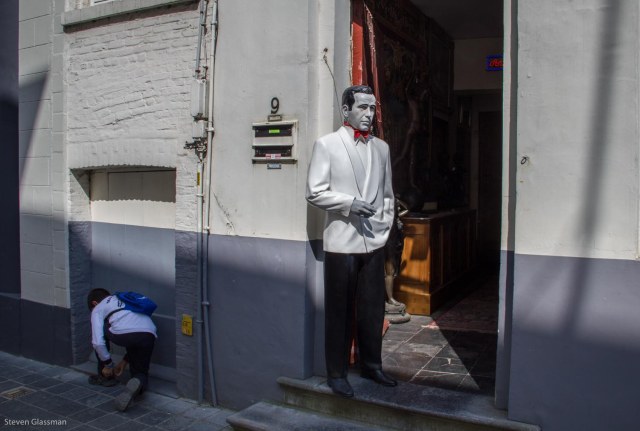 Picturesque street, walking in the direction of the Markt, the main market square.

One side of the Markt.

The opposite side of the Markt.  This is the Stadthuis, or City Hall.   In Germany, they’d call this a Rathaus.

Flag time!  The one in the center is the flag of Belgium.  It has the same colors as the German flag, but vertically and in a different sequence than Germany’s horizontally barred flag.  The flag on the left is the flag of Flanders, and the one on the right, not really clearly visible in this picture, is the flag of the city. 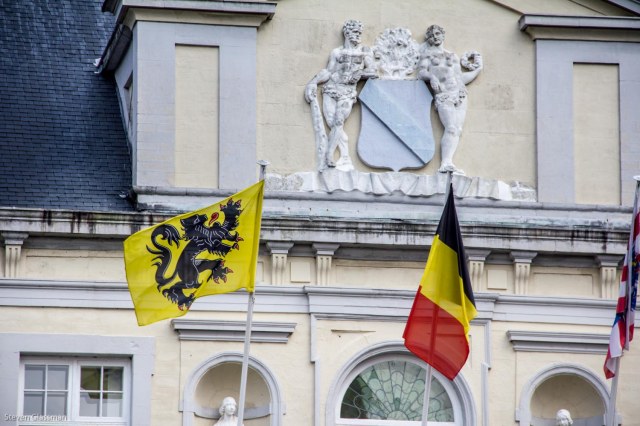 Ever seen a hang drum?  They’re kind of amazing if played well.  This dude was set up in the courtyard behind the Belfry, the Markt’s big tower visible a few pictures further down.

This video is not the same hang drum player as the one in Bruges, but you can get a sense of what the instrument sounds like.

This is also in the Markt.

Throughout the day, I kept seeing people on tandem bicycles.  I’ve never seen so many two-person bikes as I did in Belgium.

This is a picture from across the Markt.  It’s the only shot where I managed to get the entire Belfry tower into the picture because most of my other photographs were taken from the base of the Belfry.  I did not get to climb this one-  the line to get in was longer than the amount of time I had.

I did some wandering from square to square.  The pointy buildings in the center of this shot are typical of Bruges architecture. 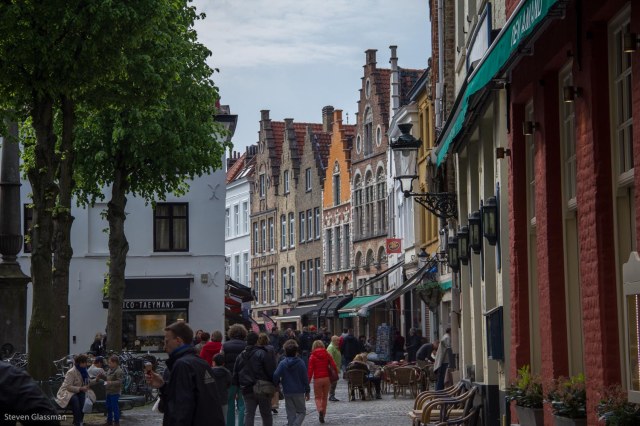 Many of the cities have these metal relief maps, with braille on them.  It’s rather ingenious, even though I can’t even imagine how a blind person would find their way through the maze of the city to find the braille map without assistance.

In other news, the facial expression on the blonde girl eating in the background is hilarious.  I didn’t realize she was making that face until I was sorting my photos.

City squares always seem to have “floating” dudes trying to make some cash.  This one was a little different though- normally they’re seated.  They all have the giant weighted base and the staff going up to the left arm- I’m positive that’s what’s supporting his weight.  This one was different in that he kept swinging his legs back and forth.  He may have had stirrups or something.  In any case, it’s a pretty striking illusion.  If I hadn’t seen this five different ways in five different cities, I might not have spent so much time thinking about how it’s done.

This dog was so very happy.  They kept feeding him!

There were displays of lace all over the city and I didn’t make the connection to Brussels Lace until I saw this woman actually sitting in her doorway making lace in real time.

In hindsight, I should have gotten some video- she was moving her hands incredibly fast.

Of all the pictures I took from the canal boat cruise part of the day, this is the very best one.  This dog was snoozing in a window that was canal adjacent.  It looked like the perfect place to have a nap.

On the walk back to the bus, we passed through a sculpture garden containing sculptures of the Four Horsemen of the Apocalypse, by sculptor Rik Poot.

I’ll give you a moment to stop giggling about the man’s name.

So the one in the upper right is obviously Death, but I’m not certain of which is which on the others.  Clockwise from Death, I believe it’s War, Famine, and Pestilence.  I could easily be wrong though, and I didn’t think to photograph their labels while I was there. 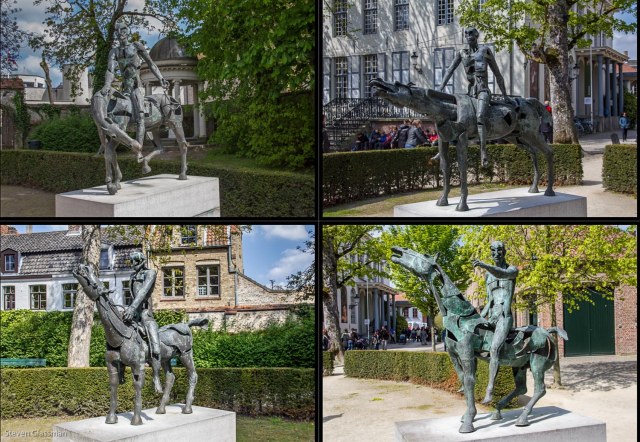 Have you ever been to Bruges?