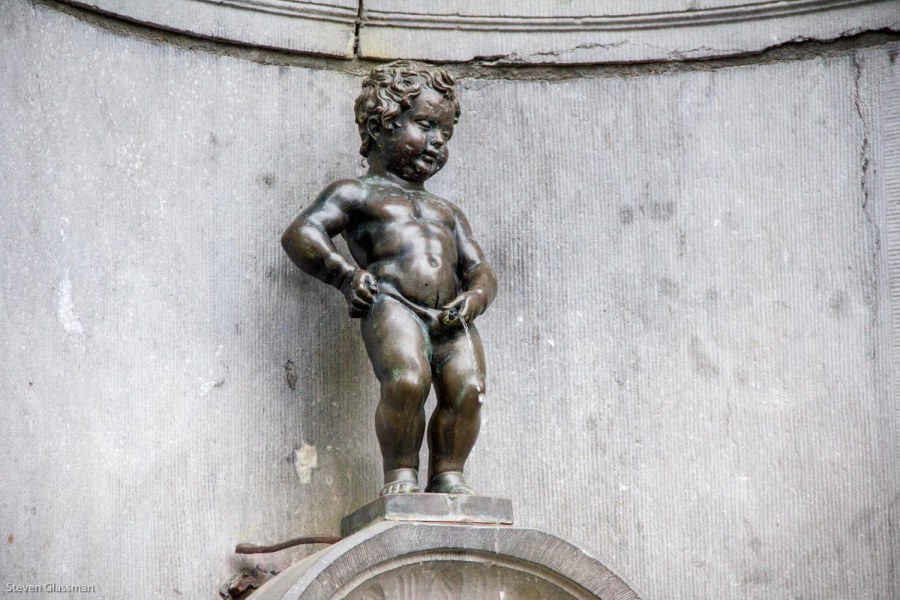 My trip to Belgium included a bunch of time spent in Brussels, the de facto capital of the European Union.  It’s a fascinating city.  I arrived via high speed train to the city around 5:30 in the afternoon.   Walking to my hotel from the station, I found something interesting in less than ten minutes-  this building’s angel/demon stone-work was just fascinating to me.

After I dropped my stuff off at the hotel, I went back out with my camera to see a bit of the city.  I also had a specific goal in mind, but I’ll get to that in a moment.  On the walk into the city, I found this Pop-Up Restaurant.  It was set up temporarily in front of the Le Monnaie De Munt, a rather nifty looking theater.  The Pop-Up Restaurant was set up so they could film a television show, according to the signage.  I briefly considered trying to get a table before moving on. 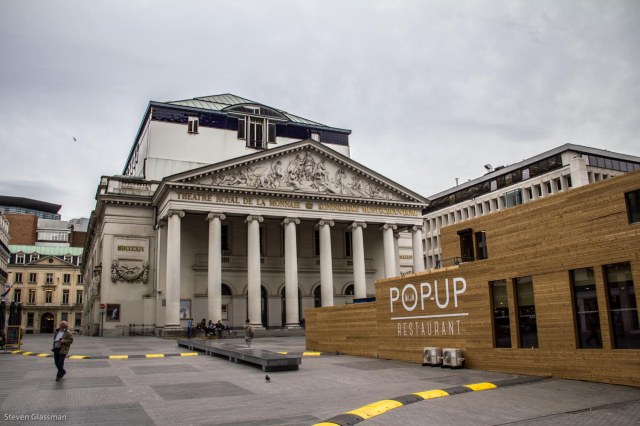 Walking further toward the Grand Place, I spotted this rather amusingly named restaurant.  It had pretty typical food on the menu and I almost had dinner there one evening, but changed my mind at the last minute.  Also, I thought the eggs were regular decoration, but they were just there because it was Easter weekend. 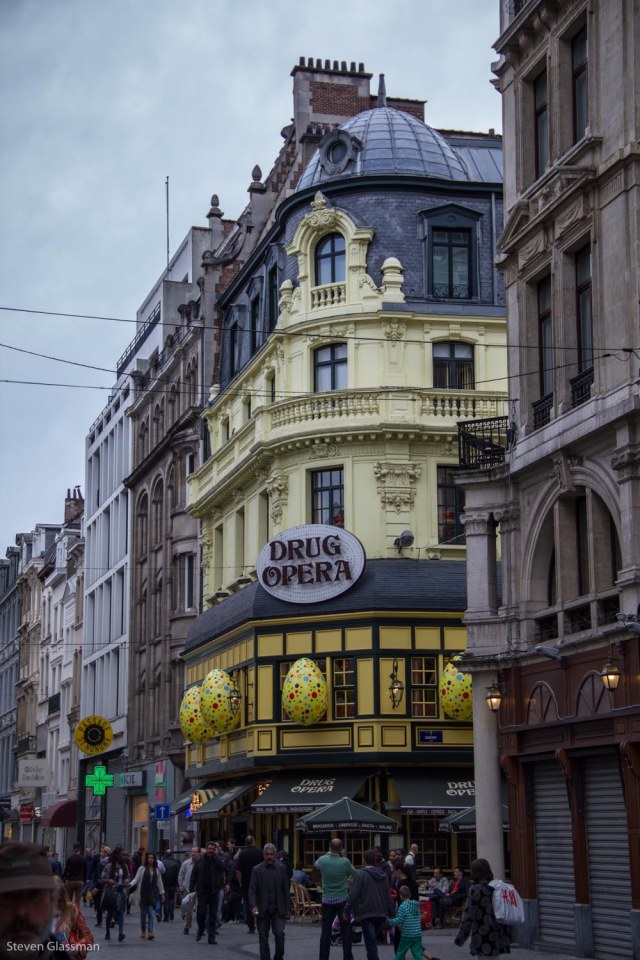 I wandered from there into the Grand Place.  It’s pretty hard to miss this enormous square.  The Town Hall has an enormous pointy bit.  I did not climb the pointy bit, as you had to make a reservation in advance to do so.

I mentioned above that I had a specific goal in mind for my walk through the city on the first evening.  Most everyone has heard of Manneken Pis, the famous statue of the little boy peeing.  That statue is widely associated with Brussels, and is one of the symbols of the city.   There are two more peeing statues, though:  Jeanneke Pis, a little girl peeing, was put up in 1987, and Zinneke Pis, a dog peeing, was put up in 1998.  I decided when I left the hotel that I wanted to find all three before sundown.

Zinneke Pis was the first one I found.    The tile Space Invaders art drew my attention to the corner before I spotted the dog on the corner.

Someone asked me if it was a male or female dog.  I can say with authority that it is most decidedly a male dog.  You just can’t see it in this camera angle. 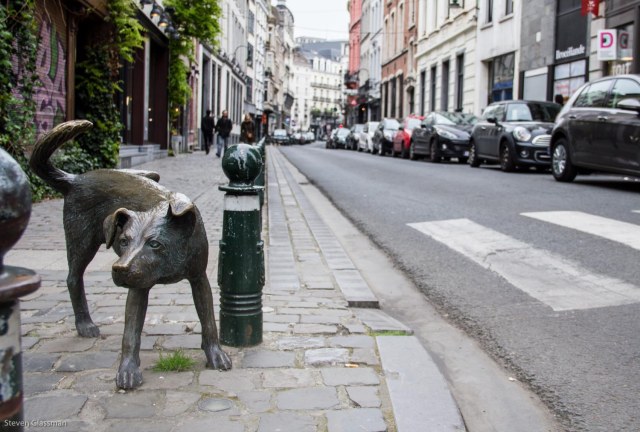 Next up is the Manneken Pis.  This one is marked on sightseeing signs and tourist maps, because it’s the most famous of the three.  This fountain was erected in 1619, and they dress it up in various costumes several times per week.  There was no costume while I was there, which surprised me because it was Easter weekend.

This is not the only Manneken Pis; there are others in various cities in Belgium, and one in Tokushima, Japan which was a gift from the Belgian embassy.

I saw so many replicas while I was in the city, including one made all of chocolate, and this one dressed up for the World Cup later this year.

Moving on from the Manneken Pis, I found my way next to Jeanneke Pis, erected in 1987 very close to the Rue des Bouchers, which is a narrow street full of restaurants.   Jeanneke Pis is not far from the Grand Place, and it is regrettably behind locked iron bars which makes getting a good picture of her somewhat difficult. 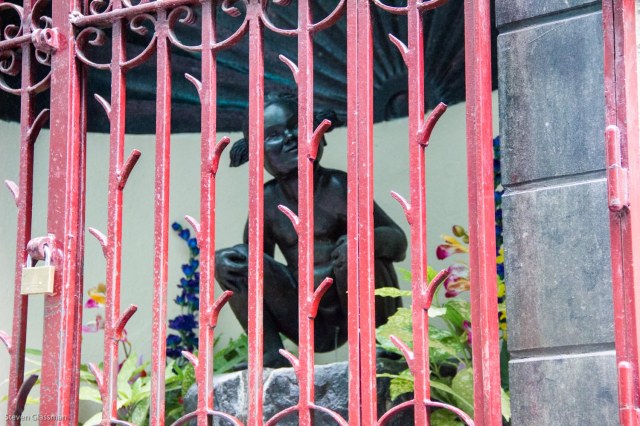 Jeanneke Pis is basically across the street from the Delirium Tremens Beer Bar and Cafe,  which made this a perfect time to stop for a nice Belgian beer before dinner.

I tried the Delirium Nocturnum, a strong delicious dark beer with an 8.50% alcohol by volume.  Did I mention it was delicious? 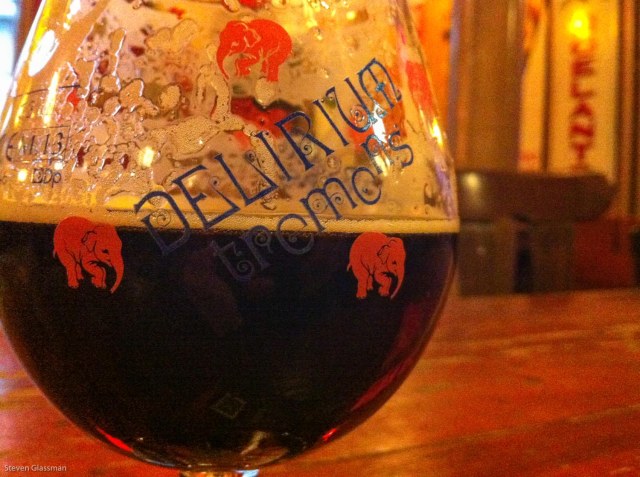 After leaving Delirium, I decided to look for some dinner before retiring for the night.  Passing by it, I saw the Beurs, the Brussels Stock Exchange, which is the location of the Art of the Brick Lego art exhibit.  I’ll come back to this in another post, because I checked out this exhibit right before I left Brussels two days later.

The next day, it was time for my actual tour of Brussels, led by a professional tour guide.  It started in the Grand Place, so here’s another view of that large plaza.

While I was waiting for the tour to start, I had a Belgian waffle covered in powdered sugar.  The powdered sugar made me cough, which caused me to be completely enveloped in a cloud of white powder.

Moving on, we walked past the Cathédrale des Saints Michel et Gudule (Cathedral of St. Michael and St. Gudula,)  which was completed in 1519. 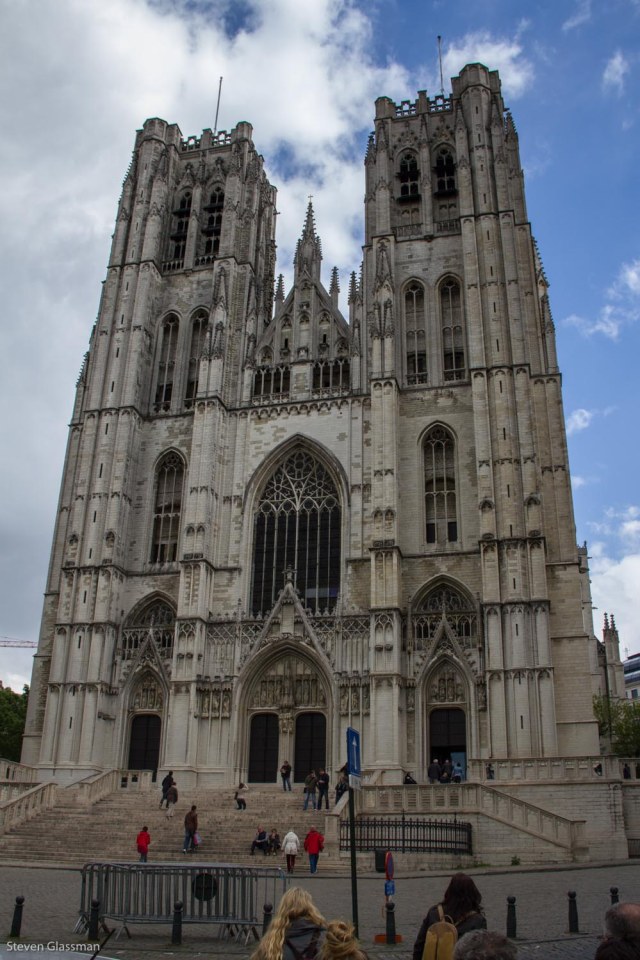 This is at the base of a very tall monument, but none of my other pictures came out very well.  The structure is the Colonne des Congrés (the Congress Column.)  The four corners are statues representing the four freedoms of Belgium- Freedom of the press, of religion, of education, and of association.

The flame is atop a Belgian Tomb of the Unknown Soldier,  from World War I.

Moving on, we visited the Parliamentarium’s visitor’s center, which is all about the European Union’s Parliament and how it governs.  It was pretty neat, actually.  This first section represents the main structures in the three governing cities of the EU-  Brussels, Luxembourg, and Strasbourg.

How far is it to your home city? Vienna’s only 917 kilometers away… 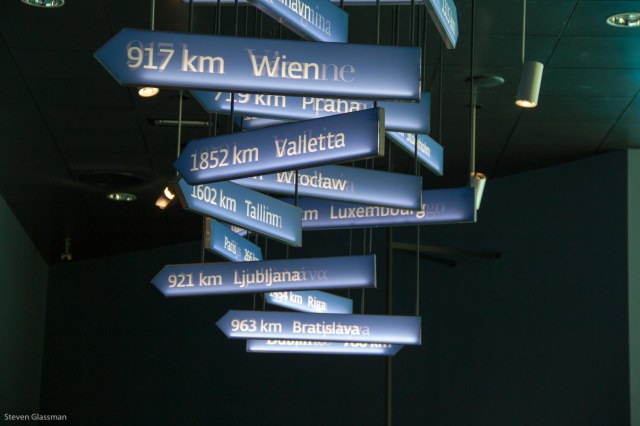 The exhibit had a detailed model of the European Parliament’s seating arrangement.  Interestingly, the seating is not by nation, it’s by political affiliation.

I missed all but the last three minutes of this film about how the Parliament makes decisions because I was fascinated by shiny objects on the other side of the hall.  It looked interesting, though. 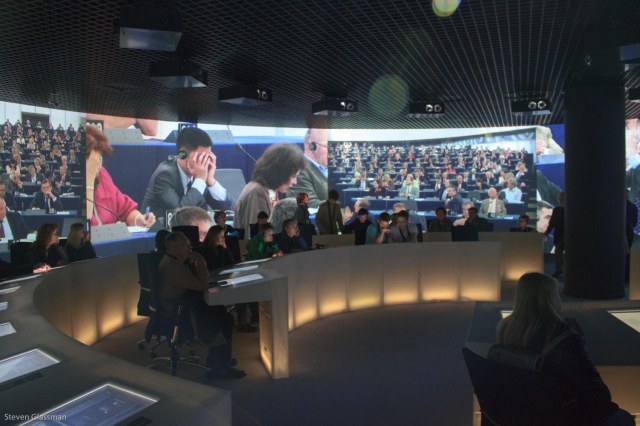 On the way back from the Parliamentarium, we passed the Triumphal Arch in the Parc du Cinquantenaire, but alas, we didn’t actually go into the Jubilee Park, so this is the best photograph I took of the Arch.

This… this is just an enormously large flower pot that amused me.

I ate at two different restaurant chains that I quite enjoyed while I was in Brussels.  The first was called Quick.  The face of the restaurant was emblazoned with a giant lit up sign that said “Quality Burger Restaurant,” and the sign made me skeptical enough to try it.  (“Challenge accepted!“) It turns out that it’s got all the soul that McDonald’s has given up over the years,  and the burgers were delicious beyond all reason.  The other restaurant that I tried was a healthy chain called Exki.  This place was utterly delicious-  it was a little like the Pret a Manger and Eat chains that are all over London, but with more hot prepared foods and a few other interesting choices like the Ubuntu cola in the picture below.  (It was decent, but Coke is still better.)  They name their sandwiches with people names, so my lunch as pictured below was John.  The chocolate brownie in the background was so delicious.

I am excited beyond reason that they’re opening an Exki in New York City.  You have no idea.

My next-door neighbor Lori sent me a link before I left for Brussels with a list of the top ten places to get a great view of Brussels.  One of those places was a parking garage called Park 58.    Entrance is free (because it’s a parking garage, not a tourist attraction,) and the elevator will take you right to the tenth floor.  From there, you have a fantastic view in almost all directions.  This is the view looking back toward the Grand Place.

On the other side, you can see clearly all the way to the Atomium.  The Atomium is really cool, and I’ll talk about my visit there in another post.

This statue is near Grasmarkt.  I didn’t remember to catch the plaque that explains it, but I quite dig the man’s mustache and his friendly dog. 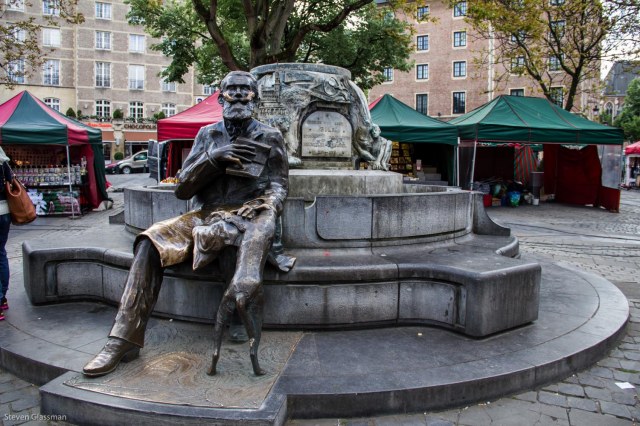 Don Quixote and Sancho Panza?  Yup!  I’m not sure why it’s in Brussels, but it’s in Place D’Espagne, and it’s a replica of the original statue in Madrid. 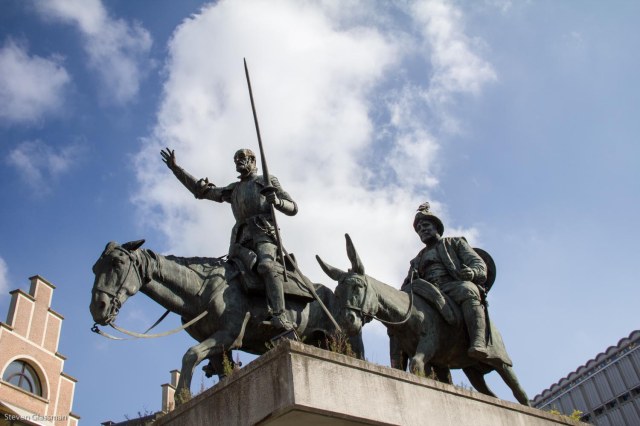 Last, but certainly not least, Brussels is another city full of art.  I kept noticing that the exposed sides of buildings were painted all over the city.  I only snapped pictures of these four, and there was one more of a swashbuckler that I wanted to go back for, but I didn’t have time.   I love that the buildings have this much character.  These four are in different places all over the city:

Have you ever been to Brussels?  What was your favorite thing about the city?