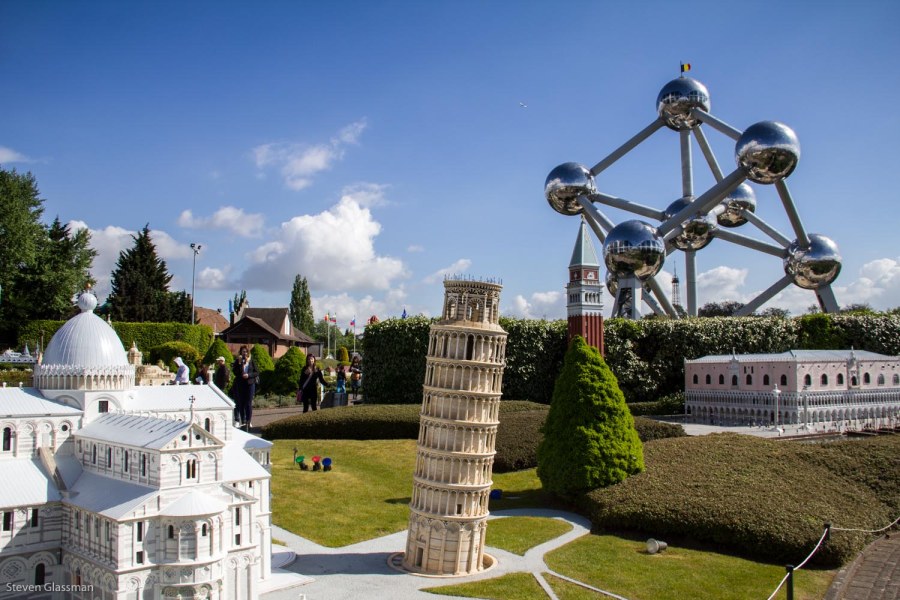 One of the things I was most looking forward to in Brussels is Mini-Europe.  Mini-Europe is exactly what it sounds like-  a 24,000 square meter park next to the Atomium in Bruparck containing models of well known structures from throughout the European Union, built in a scale of 1:25.   It’s delightfully cheesy and wonderful.

Also, I made new friends there!  The couple who sat down next to me on the metro on the way there turned out to be a Canadian couple who were traveling Europe, and we wound up hanging out together for Mini-Europe and the Atomium.  Hi, Chelsea and Andrew!

I was really curious after seeing this as to what the telescope looked at.  It turns out that it’s a slide-show about the history of the telescope.

Throughout the park, there are boats, cars, trains, and various other things in motion.  This boat caught my attention because the dude in the front-left seat is wearing a Stormtrooper helmet.  Unfortunately, it was too fogged up for me to see who else might be hiding in there.

This is the Grand Place in Brussels, depicted here with the carpet of flowers that is put down every second year.  It will happen this year around August 15th.

The Belfry in Bruges.   The big metal structure behind it is the Atomium… I’ll get back to that. 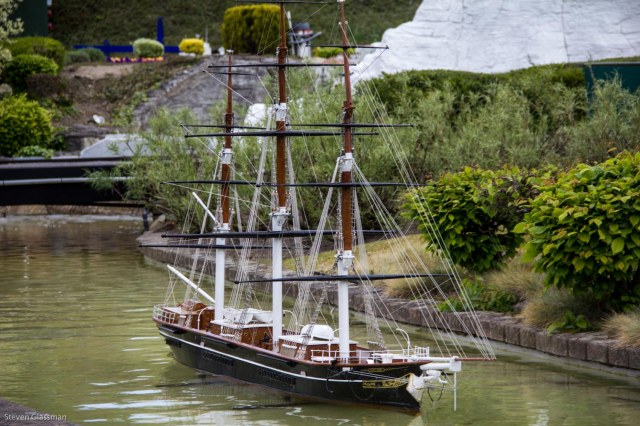 At various points around the park, there are local outfits you can “try on.”  Near London, there was this traditional uniform of the Queen’s Guard.  Naturally, I couldn’t resist.  (Special thanks to Andrew for snapping this shot of me.)

London.  Big Ben and the Houses of Parliament.

The Eiffel Tower.  Even at 1:25 scale, Eiffel’s Tower was enormous.

Sacre Coeur, also from Paris.  The Funicular was running, too!

The Leaning Tower of Pisa. 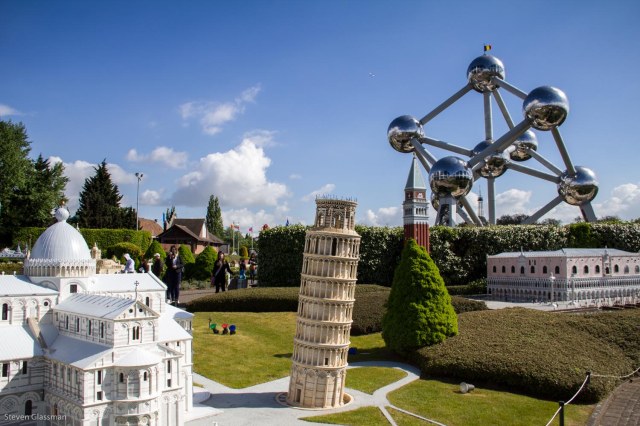 Scientific exploration?  This is part of the detail on the Leaning Tower.

Venice.  The Doge’s Palace and the Campanile tower. 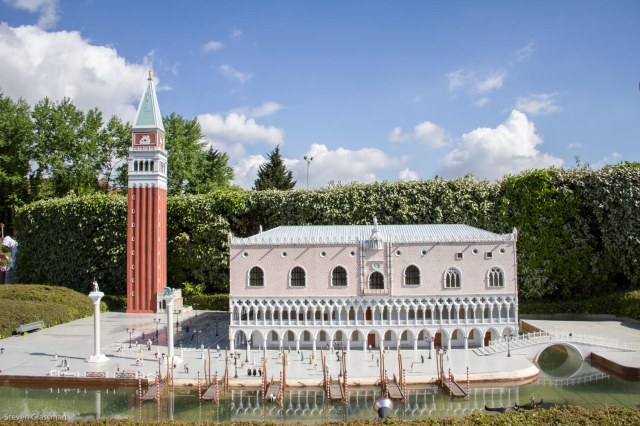 I think this Gondolier needs a little help. 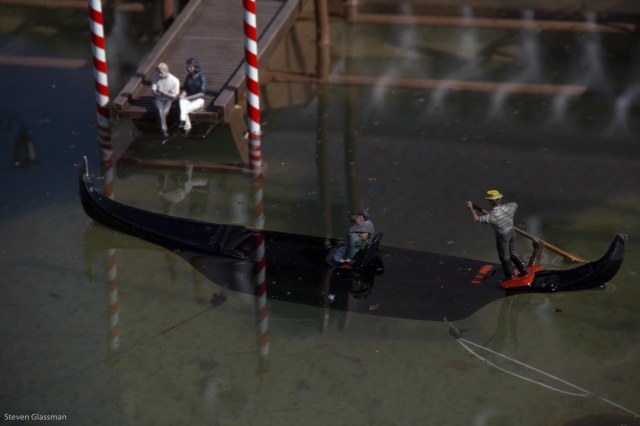 A tiny recreation of the fall of the Berlin Wall. 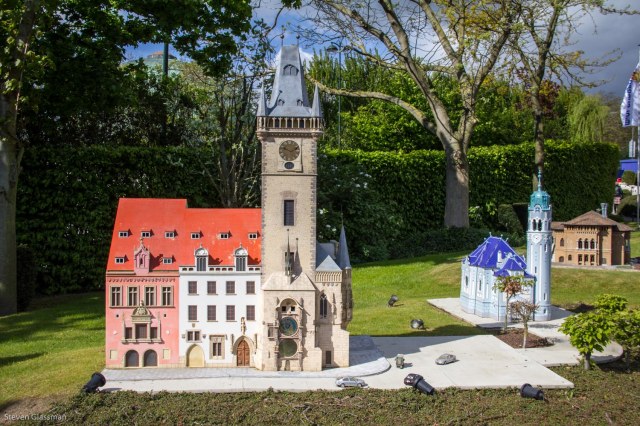 After we were finished with Mini Europe, we stopped briefly at the gift shop, where Chelsea spotted this happy little kitty hanging out on the roof near the exit. 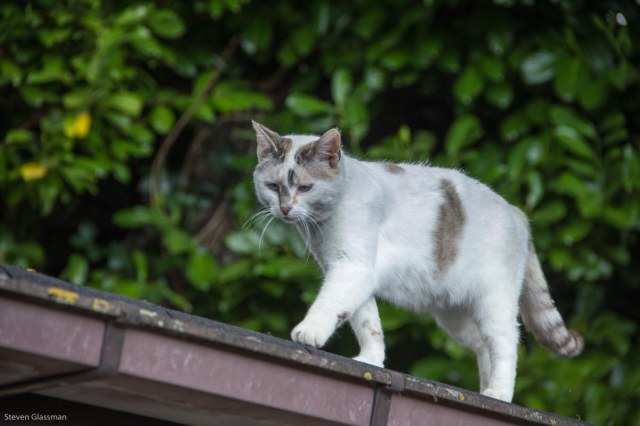 When these workers stepped into the pool in front of the 16th century Castle of Chenonceaux (France),  all I could think was, “Giants in the playground!”

…and then it was time to go to the Atomium!

The Atomium was  built for the 1958 Brussels World’s Fair. Its nine stainless steel wrapped spheres are connected to form the shape of an iron crystal magnified 165 billion times.  Four of the spheres contain exhibits, and the topmost sphere is a 360 degree observation deck and restaurant.  There’s a webcam on top, at a height of 102 meters, if you want to check it out.

The Atomium has perhaps the best “You Are Here” maps I have ever seen.

…and the views are unparalleled.  This is looking out from one of the spheres back toward Mini Europe.

This is the view straight up from the base of the Atomium.

And because I never get tired of the Atomium, here’s a shot from further afield that I took later in the day.

…and a rare picture of me standing in front of a landmark.  I much prefer being on the other side of the camera.

Have you ever been to Mini-Europe or the Atomium?

5 thoughts on “Mini-Europe and the Atomium”